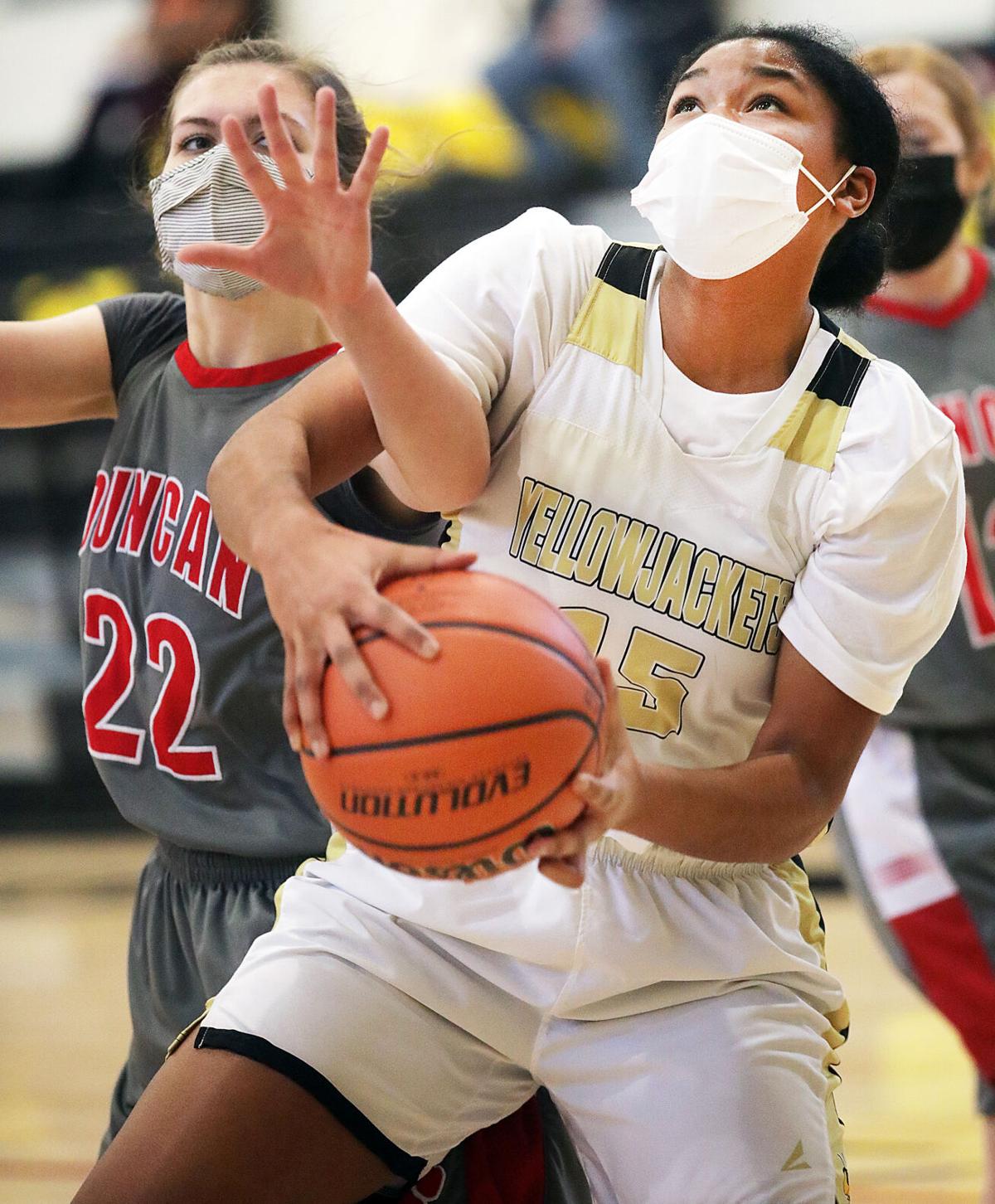 Tombstone’s Arceli Blackwell is fouled while going up for a shot versus Duncan in Herman Fischer Gym Saturday. 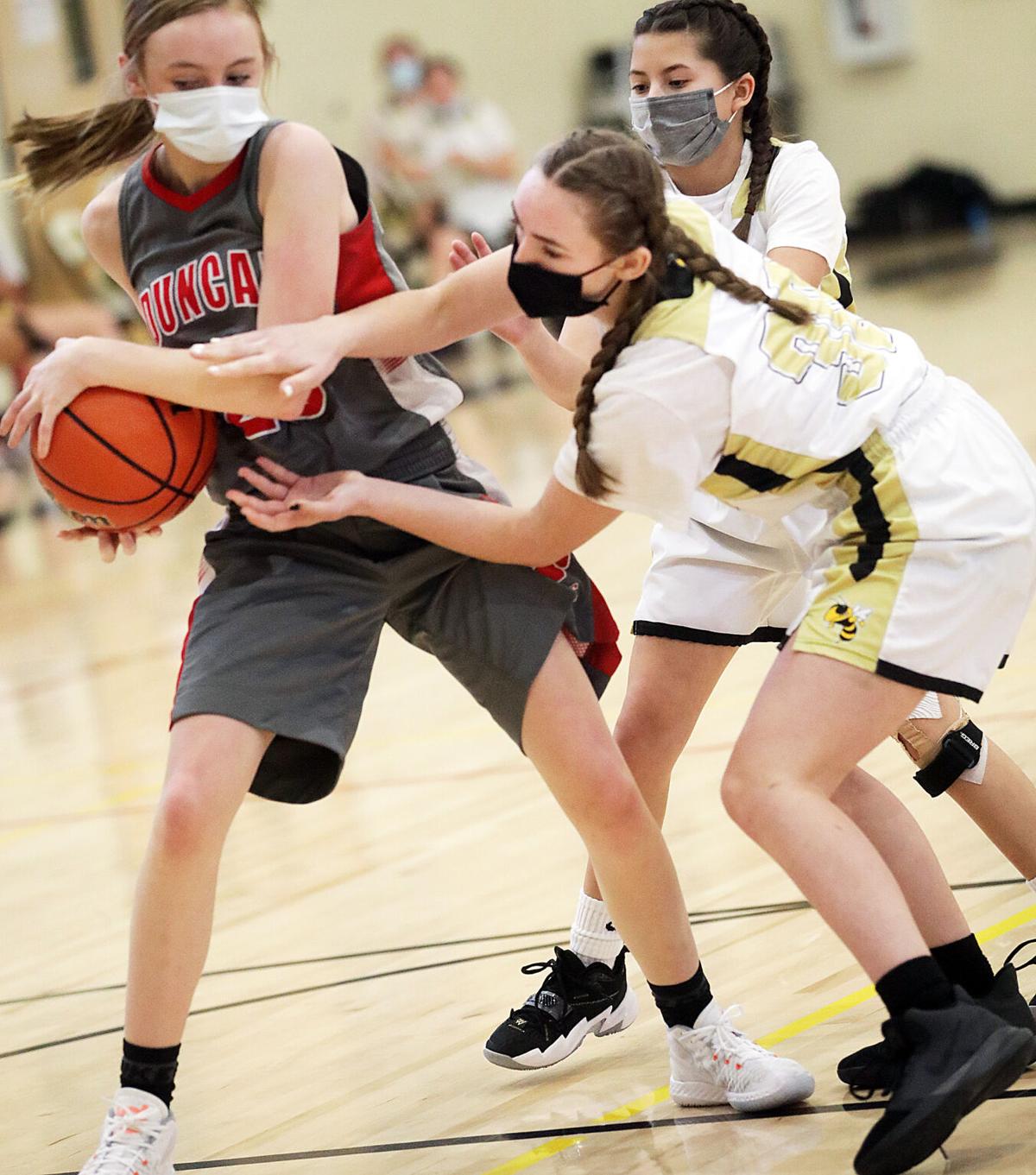 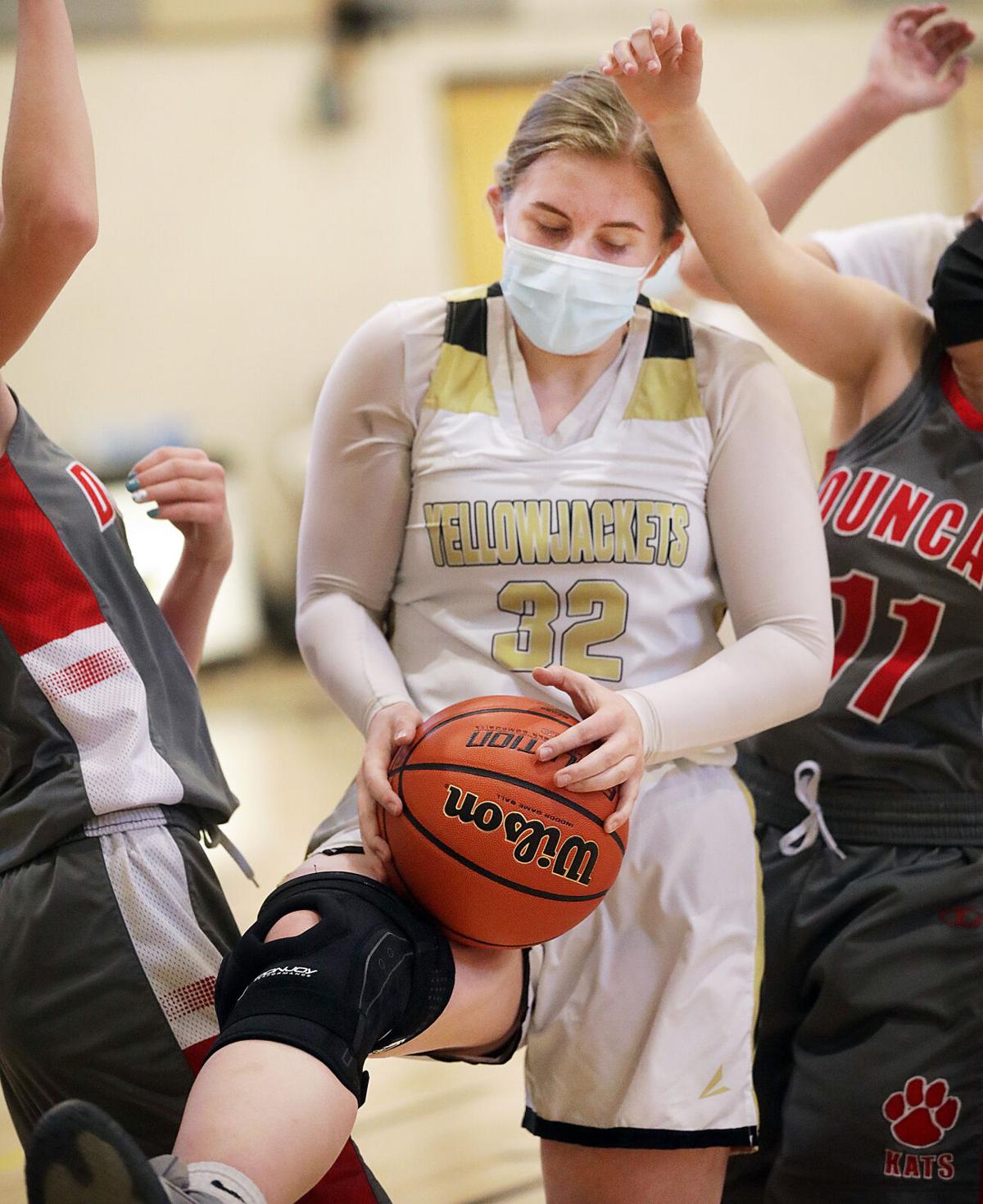 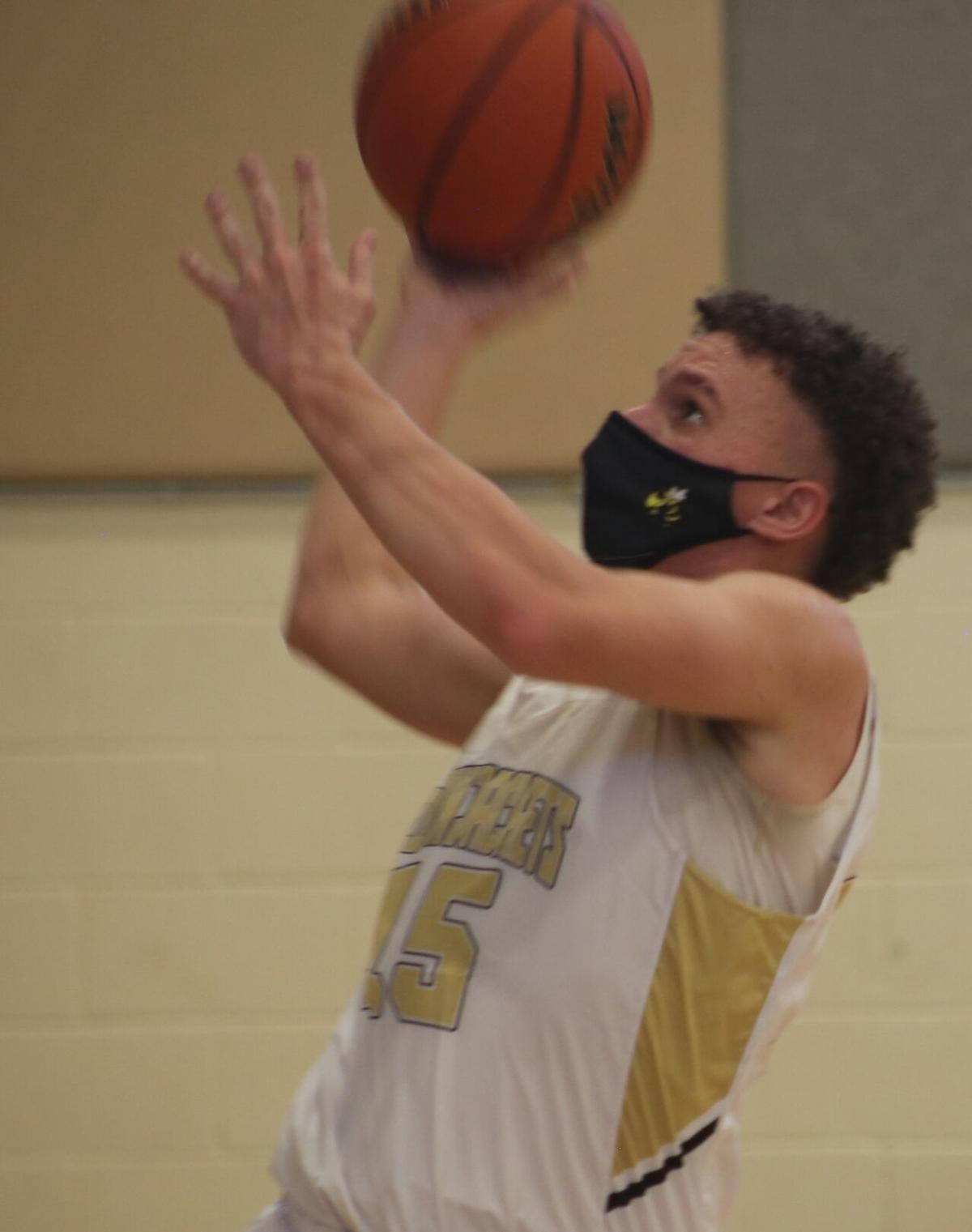 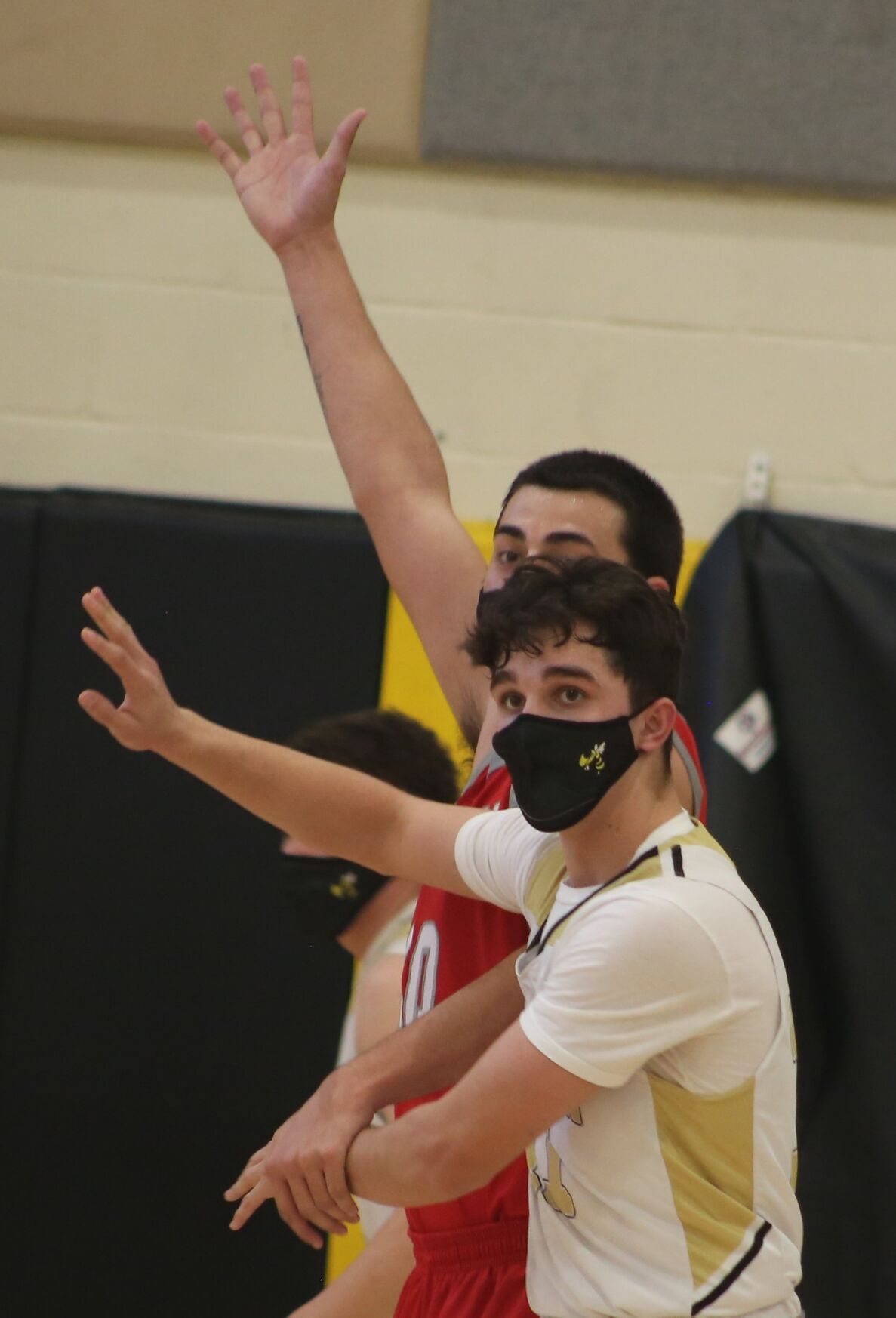 Tombstone’s Arceli Blackwell is fouled while going up for a shot versus Duncan in Herman Fischer Gym Saturday.

The girls opened the afternoon with a 35-21 loss after playing most of the game from behind while the boys lost 56-47 after watching their first half lead disappear in the latter half of the game.

Arceli Blackwell and Kierstan Schilling led the Tombstone girls with six points each.

The Yellow Jackets trailed for most of the first quarter but two buckets with less than a minute left in the quarter gave them the lead. Hailey Flores hit a 3-pointer with 13 seconds left to make the score 5-3.

Duncan tied the game 5-5 early in the second quarter.

The Wildkats broke away midway through the quarter to take a 11-7 lead and held a 15-7 advantage at halftime.

Tombstone’s offense found some rhythm in the third quarter but was unable to prevent Duncan from scoring consistently.

Missed free throws late in the fourth quarter by the Yellow Jackets also prevented them from overtaking the visiting squad. Tombstone’s eight points in the third was the most they scored in a quarter.

The boys teams were equally matched throughout most of the game. Ultimately it was the Wildkats who were able to capitalize on a good shot selection and sloppiness by the Yellow Jackets to win.

Sean Kacenga opened the game with a 3-pointer that was matched by the Wildkats to tie the game. He led the Yellow Jackets with 16 points, including three 3-pointers.

Three pointers carried both team’s offense. The Wildkats’ sharp shooting was maintained through the game, while the Yellow Jackets went cold in the second half.

Tombstone held a 27-26 lead at halftime.

The Yellow Jackets kept their advantage despite a surge by the Wildkats, who at the 3:48 mark of the third quarter tied the game 36-36. Four consecutive 3-pointers by Duncan in the last three minutes gave it a 49-38 lead to end the quarter.

Tombstone scored just eight points in the final quarter, which wasn’t enough to provide a victory.

The Tombstone boys and girls are back on the court on Monday when they travel to Elfrida to take on Valley Union.