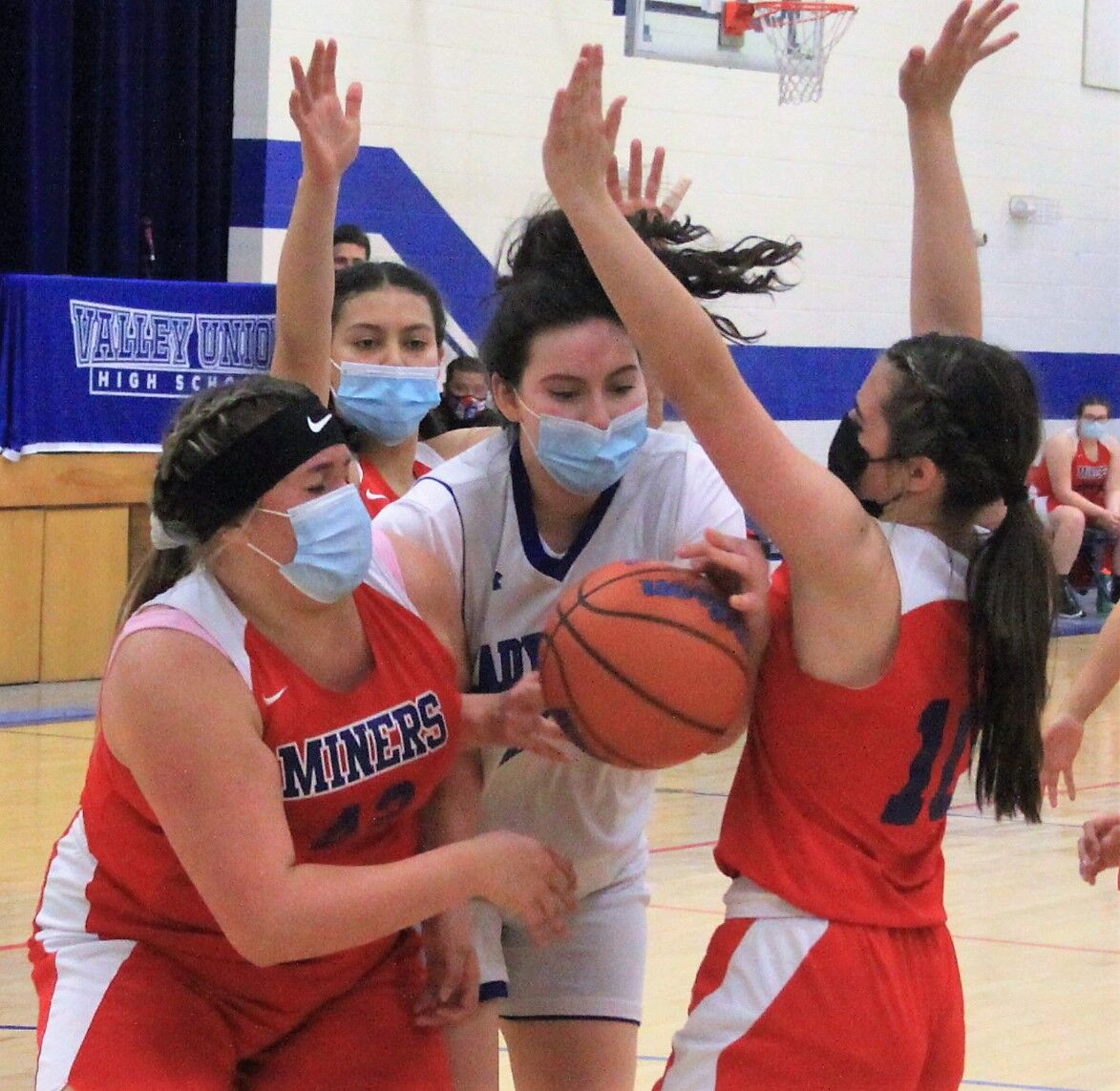 Victoria Armijo finds herself swarmed by San Manuel players as she attempts to get a shot off Thursday. San Manuel's defense forced a season-high 31 turnovers for VU. 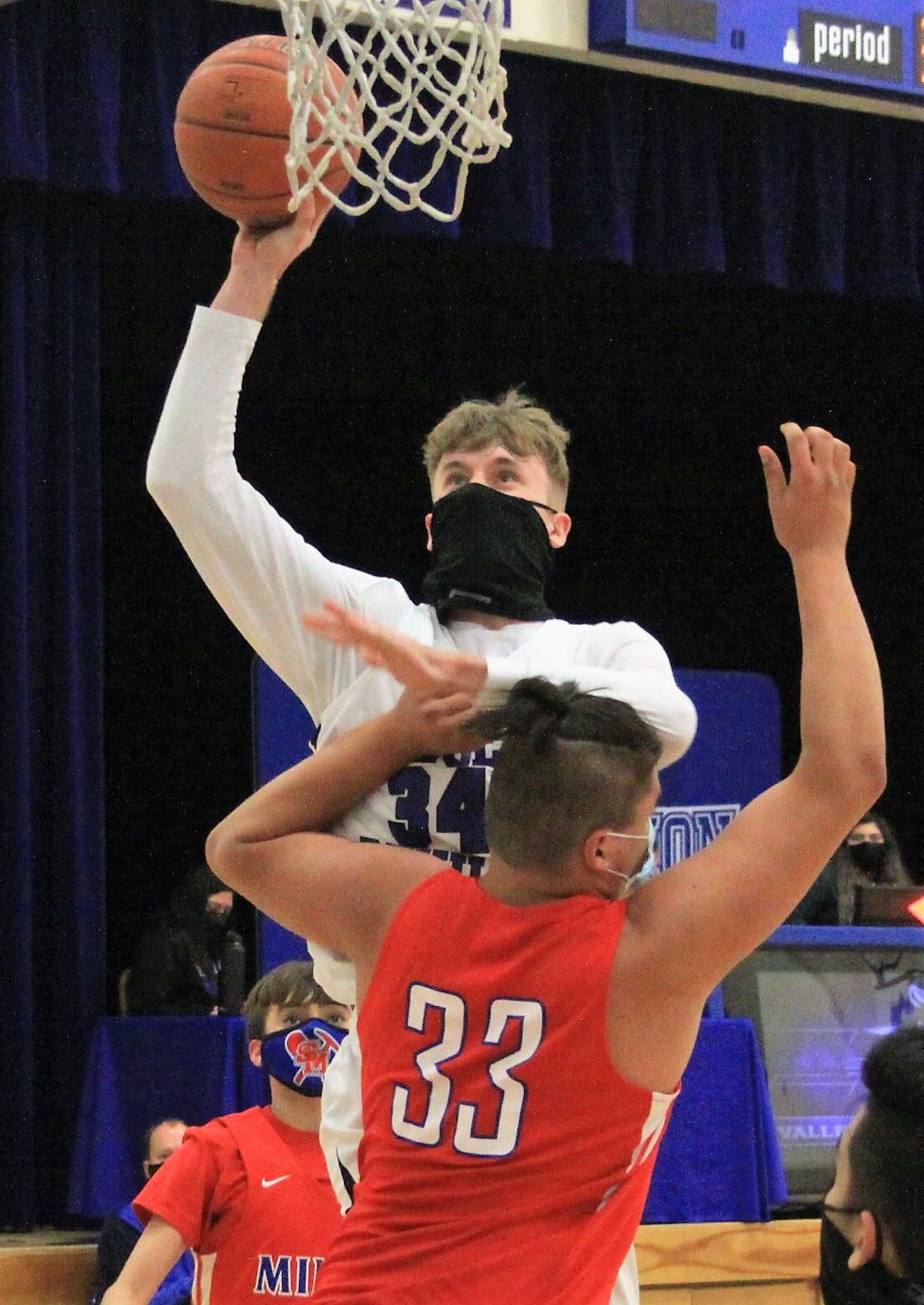 Valley Union's Bradley Noble puts up a shot over San Manuel's Jonathan Guisa in the second half of the Blue Devils' game with San Manuel Thursday.

Victoria Armijo finds herself swarmed by San Manuel players as she attempts to get a shot off Thursday. San Manuel's defense forced a season-high 31 turnovers for VU.

Valley Union's Bradley Noble puts up a shot over San Manuel's Jonathan Guisa in the second half of the Blue Devils' game with San Manuel Thursday.

ELFRIDA — Facing a must-win situation if they hope to make the 1A state playoffs which begin March 5, the Valley Union Blue Devils knocked off the San Manuel Miners 52-36 Thursday night in a 1A South regional game.

The win snapped a three-game losing streak for Valley Union, 5-6 overall, 3-4 in league play, who as of Friday was ranked 18th in the AIA365 1A basketball rankings. The top 16 teams in the final rankings will qualify for the upcoming state playoffs.

The Valley Union girls meanwhile, playing without two key players, Breanna Enriquez and Lizet Sonke, were hampered by a season high 31 turnovers in a 41-25 loss to San Manuel.

In the boys game, the Blue Devils got off to a slow start against a Miners team that didn’t seem to be too affected by the almost three-hour bus ride to southern Cochise County. Valley Union trailed for a majority of the opening quarter. Zeke Stewart’s 3-pointer as time expired cut the Miners’ lead to 9-8.

Stewart scored the first points of the second quarter putting VU ahead 10-9. Jonathan Guzman then drilled a 3 and followed up with a pair, making the score 15-9 as the Blue Devils took the lead and never looked back.

Valley Union continued to pad its lead to 21-11 after Stewart sank another basket. Bradley Noble’s bucket late in the first half gave the Blue Devils a 29-15 lead at intermission.

Valley Union increased its lead to 17 in the third quarter and 21, 50-29, in the fourth following another Guzman pair.

Stewart led the Blue Devils in scoring with 17 points, Guzman followed with 12 and Noble and Alberto Marmolejo each contributed eight.

In the early game, the Valley Union girls struggled in the first and fourth quarters against San Manuel’s pressure defense while getting outscored 33-4 those two quarters by the Miners.

To the Blue Devils’ credit, however, much of the game was played with two to three freshmen on the court who were attempting to fill in the gaps of starters Enriquez and Sonke.

“I think the inexperienced girls were shellshocked,” Valley Union coach Dusty Vasquez said after the game. “Once we settled down, things started happening for us. The girls got too relaxed once we got the lead. When San Manuel went on its fourth quarter run, we couldn’t recover.”

VU freshman Breiah Two Moons scored the only points of the opening quarter for her team, which trailed 11-2.

In the second quarter, the Blue Devils found some offensive rhythm and battled back. Victoria Armijo’s two free throws cut the Miners lead to 15-14.

In the second half, Amanda Hageman tied the game at 19-19 when she sank one of two free throws. Armijo followed with a pair, giving VU its first lead of the night at 21-19. Baleigh Casady then sank a bucket giving the Devils a short-lived 23-19 lead going into the fourth.

San Manuel went on an 18-0 run in the fourth, again using its defensive pressure to force turnovers.

Two Moons’ bucket with 1:50 left in the game were the only points scored by VU in the fourth and cut San Manuel’s lead to 41-25.

Armijo led the Blue Devils with 11 points. Casady and Hageman each had five and Two Moons four.

“Just a tough loss,” Vasquez said. “Starting off so slow, then getting the lead. These girls have to learn how to finish. We need intensity all game. A lot to ask of freshmen in there. Mistakes are going to happen. This playing time they’re getting as freshman will help. Might have been a different game with our whole team here tonight. Now we just have to focus on our last three games.”

The loss drops the Valley Union girls to 6-3 overall, 4-3 in conference and despite the loss, the Blue Devils remain at 14th in the latest AIA365 1A basketball rankings that were released Friday.

The Blue Devils are at Duncan Saturday and will host St. David on Monday, March 1 and Desert Christian on Tuesday, March 2 in the regular season finale.

Tuesday will also be Senior Night at VUHS. The players and their families will be recognized at the conclusion of the boys game at approximately 7 p.m.