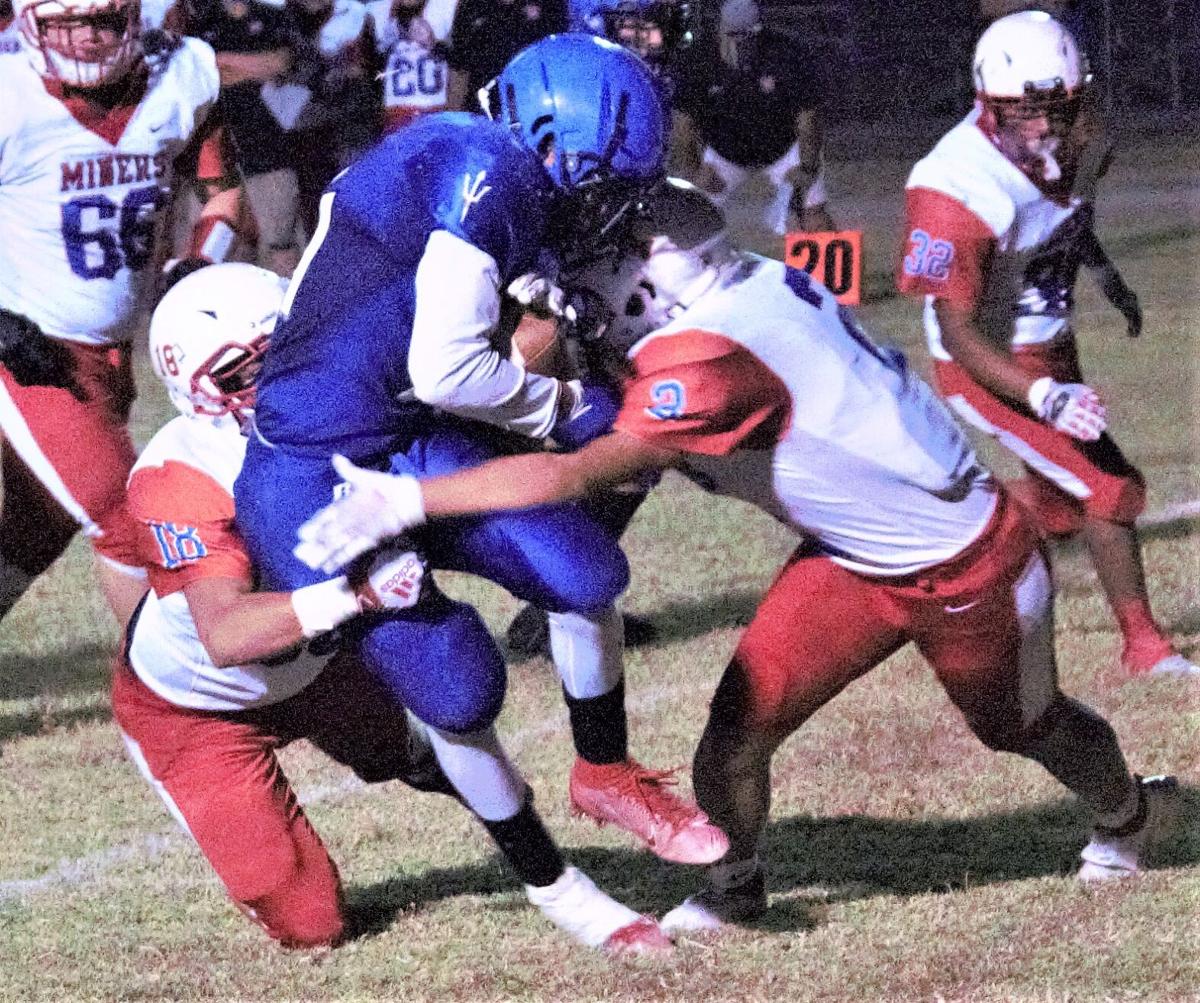 Leo Parra is hit hard by two San Manuel players in the first half of Friday's homecoming game in Elfrida. 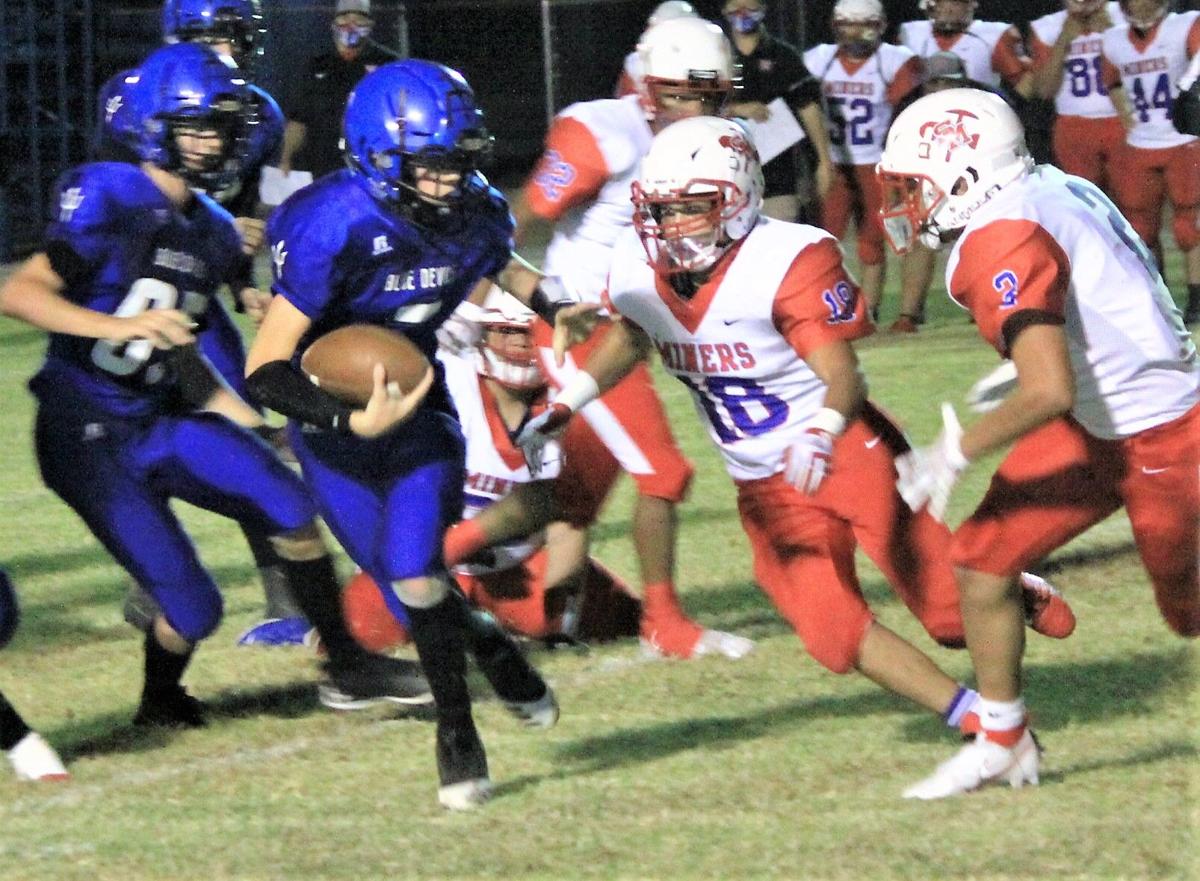 Leo Parra is hit hard by two San Manuel players in the first half of Friday's homecoming game in Elfrida.

ELFRIDA — Coming off a big win the previous week which included a state record setting performance from senior Jacob Sonke, the Valley Union Blue Devils were confident in their ability to battle unbeaten San Manuel Friday on what was homecoming as well as Senior Night for Valley Union.

The home team would not have much to celebrate by the end of the game unfortunately as the Miners used two first quarter scores to jump out to an early 16-0 lead and finishing the game with a 28-6 win.

Valley Union began the game attempting an onside kick which the Miners recovered at midfield. San Manuel needed just five plays before scoring from a yard out. The successful 2-point conversion put the Miners up 8-0 three minutes into the game.

A bad fourth down snap by Valley Union on its first series of the night set the Miners up in Blue Devil territory for their second possession of the game. Seven plays later San Manuel was in the endzone increasing its lead to 16-0 following the successful conversion.

Sonke, who the week prior ran for 532 yards, was getting a majority of the carries Friday. He finished the night with 24 carries for 113 yards. His 14-yard touchdown in the second quarter gave the Valley Union fans something to cheer about. He was stopped short on the 2-point conversion attempt as San Manuel led 16-6.

With seconds remaining before halftime, the Miners took advantage of a defensive mistake by the Blue Devils and scored on a 16-yard pass taking a 22-6 lead.

Because of COVID-19, a lot of the normal homecoming events at Valley Union like the bonfire and the floats did not happen this year.

The Blue Devils did, however, still have its homecoming court which consisted of the pairings of: Amanda Hageman and Jonathan Pursley; Janae Faccio and Levi Lawson; Breanna Enriquez and Leo Parra; Natasha Phillips and Kolby Gilbreth; Madison Vasquez and Jonathan Guzman; Natasha Phillips and Kolby Gilbreth; and Courtney Noble and Kohan Evans. Lawson and Hageman were selected Valley Union’s homecoming king and queen.

Valley Union received the kickoff to start the second half but a bad snap on fourth down gave the Miners prime field position at the Blue Devil 20.

Two plays later the Miners were in the endzone, scoring from 18-yards out building their lead to 28-6 following the failed conversion.

Valley Union would finish the night with 132-yards rushing and just seven-yards passing. In addition to Sonke’s yards; J.J. Valenzuela had three carries for 13-yards, Evans two for two and Luis Guzman one for four.

“The first couple of drives tonight we had some mistakes on defense which hurt us,” coach Brandon Gilbreth said afterwards. “Once we had those fixed we played a lot better.”

Prior to the start of the game Gilbreth and his staff recognized their four departing seniors Lawson, Sonke, Reyes and Guzman.

“For my first year I couldn’t have asked for a better group of seniors,” the coach said. “All these kids are wonderful young men. They’ve led these young kids. It has made our job as coaches a lot easier.”

Valley Union, 1-3, will be on the road next Friday at Fort Thomas. The Apaches picked up their first win of the season Friday beating Duncan 46-22.

San Manuel meanwhile, hosts St. David next Friday in what will be a battle of two undefeated teams.

Knowing they are out of the state playoff picture coach Gilbreth said they are going to play the last two games looking to improve, trying to get two wins and finish .500 on the year.

“I think the future is very bright for this team,” he said. “We put in some freshmen tonight towards the end and they were making plays.”