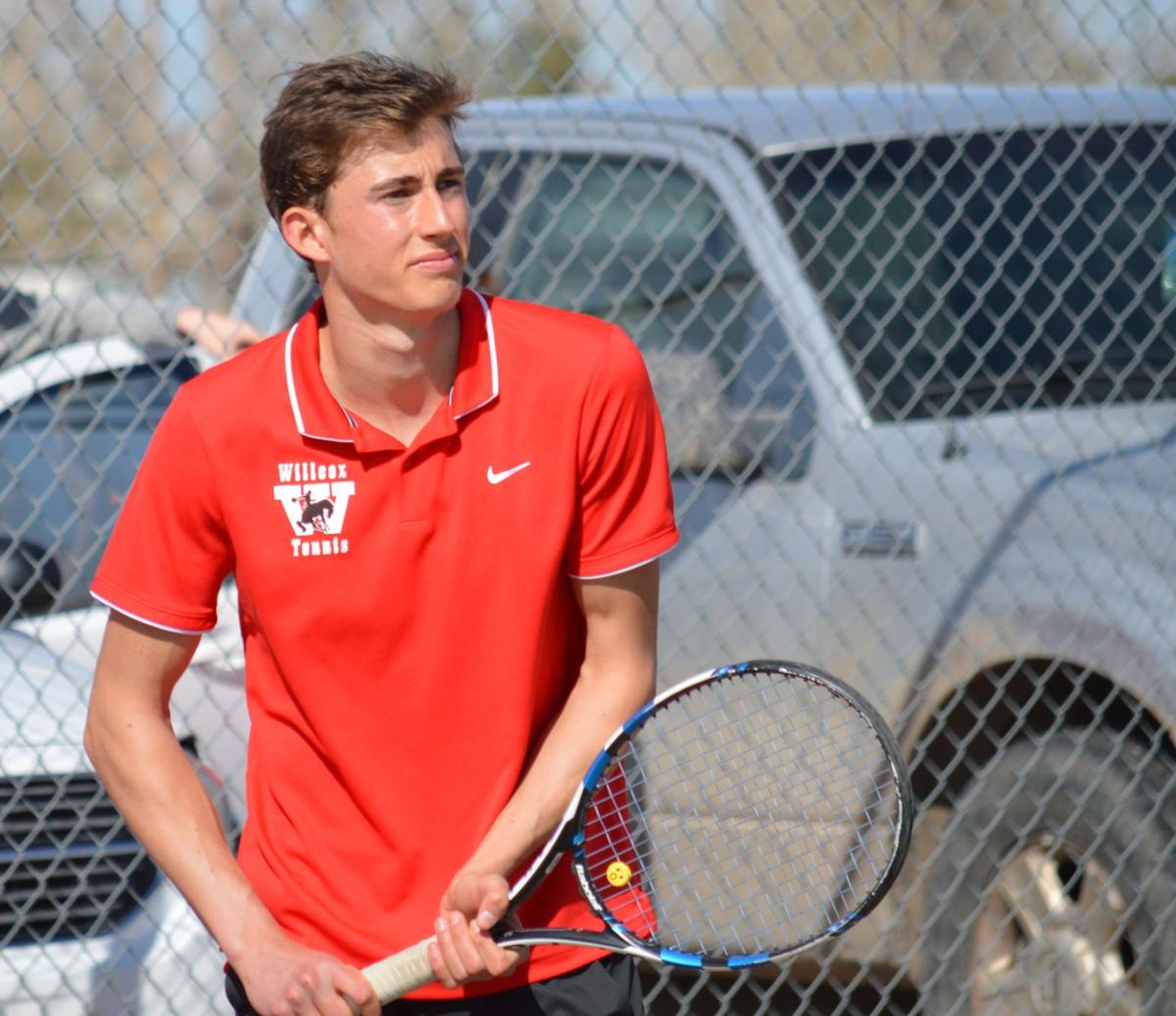 Luke Kauffman, singles champ, sizes up his next move for the Willcox High School tennis team. 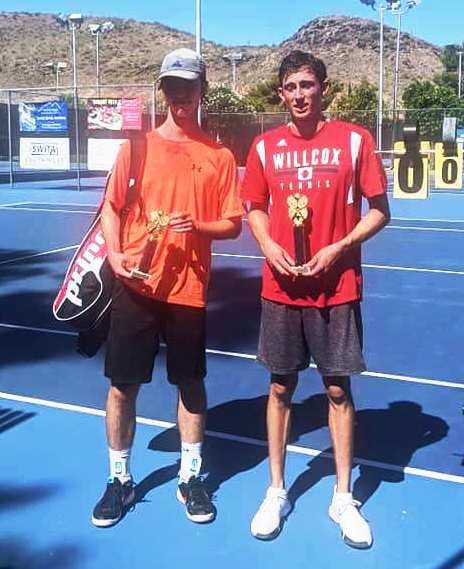 Luke Kauffman, singles champ, sizes up his next move for the Willcox High School tennis team.

WILLCOX — Luke Kauffman captured the first singles high school tennis trophy in decades for the Willcox Cowboys, but will have to settle for an asterisk next to the title.

A total of 32 of the top singles players from Division 3 were invited to Phoenix for a chance to prove who was the best in high school tennis this past spring, after having their season cut short. Kauffman was the best of the eight who accepted the invitation.

“We were hoping for a lot more,” Kauffman admitted. “Some of the kids that would have made very competitive matches didn’t show up,” .

He defeated Peter Schillinger from Veritas Prep of Phoenix 6-3, 6-2 on June 14 to take the top spot.

“It felt good to represent Willcox. It was fun to compete again,” Kauffman said. “Southwest International Tennis Academy was trying to make up for a lost season, especially for high school seniors that didn’t get to finish.

Willcox was hoping to make state as a team for the first time in the 2000s, as well as see home-schooled Kauffman realize a dream from the beginning of his junior year. He did not play as a freshman or sophomore.

“It took me by surprise when he came out,” said Willcox’s tennis coach John Chapman. “He’s been working at this since he was young. He would be out on the courts three to four hours a day. He’s seen and been a part of elite competitions around the state.”

Luke’s father, Mike Kauffman, has been training with his son for nearly 10 years and recently joined the Willcox program as an assistant coach just ahead of Luke Kauffman’s first season with the Cowboys.

“It was good competition at that tournament, but not what we were expecting with the top guys,” Mike Kauffman said “It’s not as important, though, as growing in the game.”

In an effort to help grow the game in Willcox Luke Kauffman coached during a week-long camp for local kids.

“He ran the WASA tennis program for a week this summer to teach Willcox kids ages 8-12 and 12-18,” Mike Kauffman said. “It was wonderful to see his courage and attitude at age 16 for running a clinic with games and teaching, and I was really proud he took that on.”

The act also impressed his coach.

“He’s becoming a good teacher, or good coach,” Chapman said. “I sense how much he cares about the other players and wants them to succeed.”

“At this state final, the personalities of Luke and his opponent were a lot alike. The other kid yelled at himself and Luke talked to himself. They cared so much and they want every single shot a success,” Chapman said. “I know for him, he was glad he won. I think he was extremely proud to represent Willcox. And we’re extremely proud to have him represent Willcox. To have him for our kids to look up to, to chase after, to emulate, is beyond helpful.”

In March, Luke Kauffman took on an extra duty as a student reporter, whose news stories have been published several times in the Herald-Review County Edition and he teamed up with his brother Jacob Kauffman for a May 27 story entitled “Train comes within inches of striking stuck vehicle.”

“It was scary interviewing the person who almost got killed on the railroad tracks on why he did it,” Luke Kauffman said. “It is fun to see myself published. It’s still a little surreal to me. It was so much fun to have my brother contribute, too.”

Mike Kauffman is tickled to see how life is working out in Willcox for the Tucson transplants.

“We’ve been here a little over eight years now,” Mike Kauffman said. “We decided to simplify life and take care of business here and then decided to stay and enjoy the small town and country life.”

As to the Covid-19 interruption this spring and the possibility of it affecting another season of competitive tennis, Mike Kauffman said: “There are a lot worse things to be disappointed about. I just defer to a cup half-full scenario. I hope next year will be something we can do and complete. We had a lot of fun hanging out with the Willcox tennis team and hope to get a good jump start next year. It will be that much more fun to have Jake.”