The Cowboys’ JJ Lunt (14) pulls up for a shot in the second half. 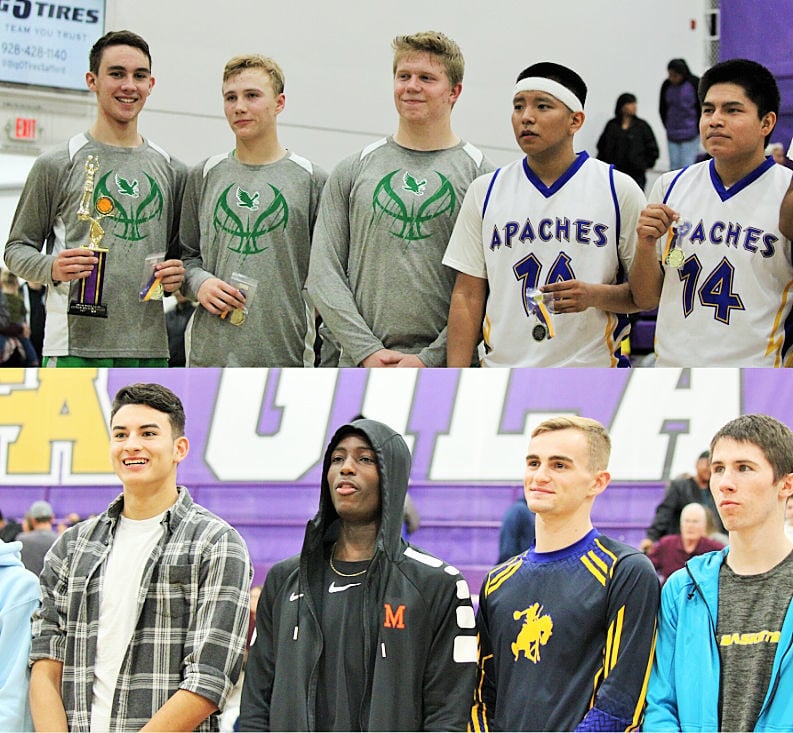 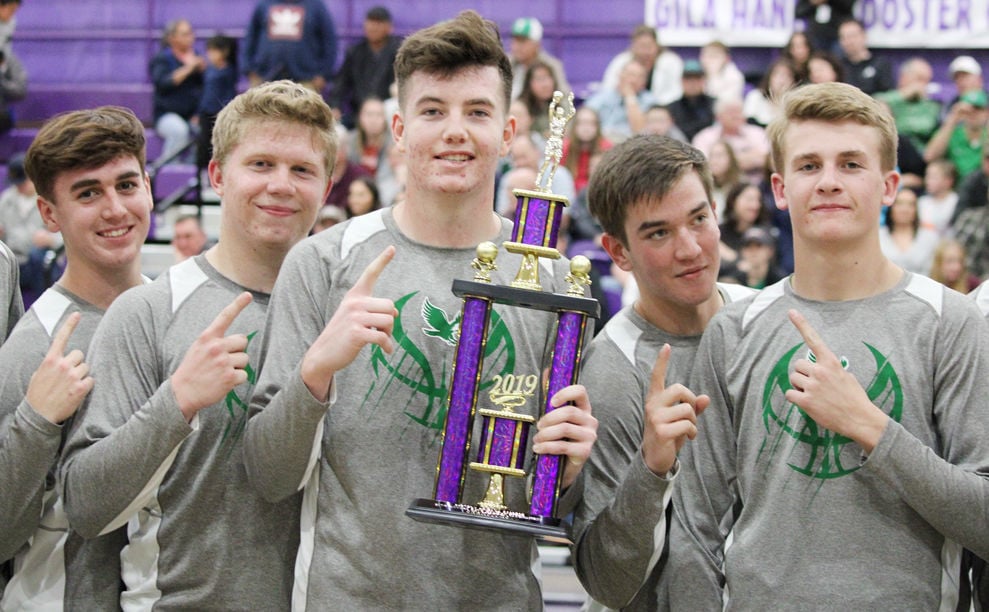 Thatcher is all smiles as players show off their first-place trophy. 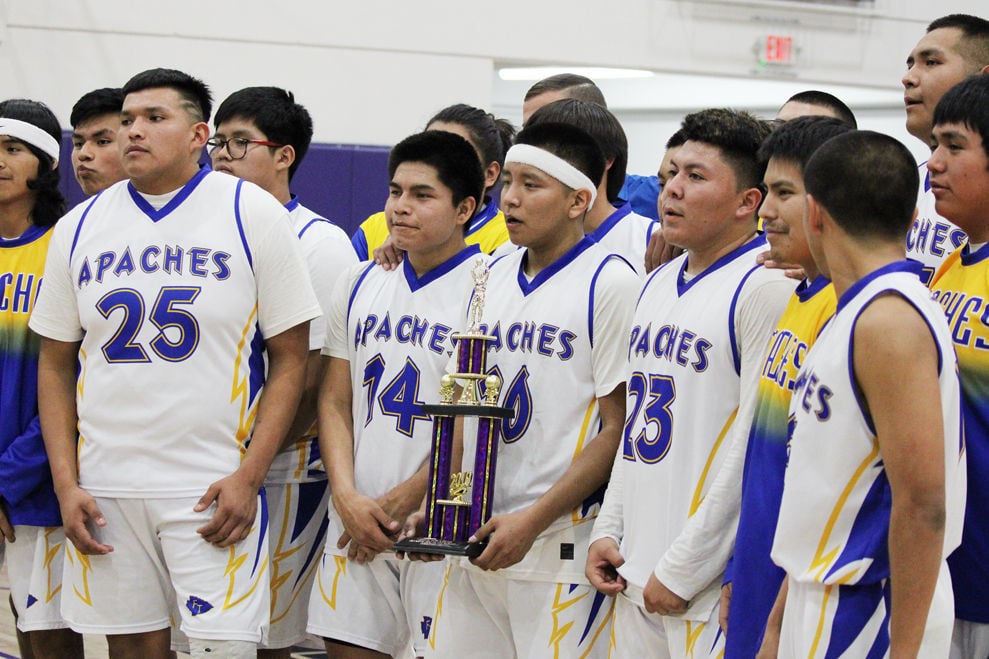 Fort Thomas poses for a photo with the second-place trophy. 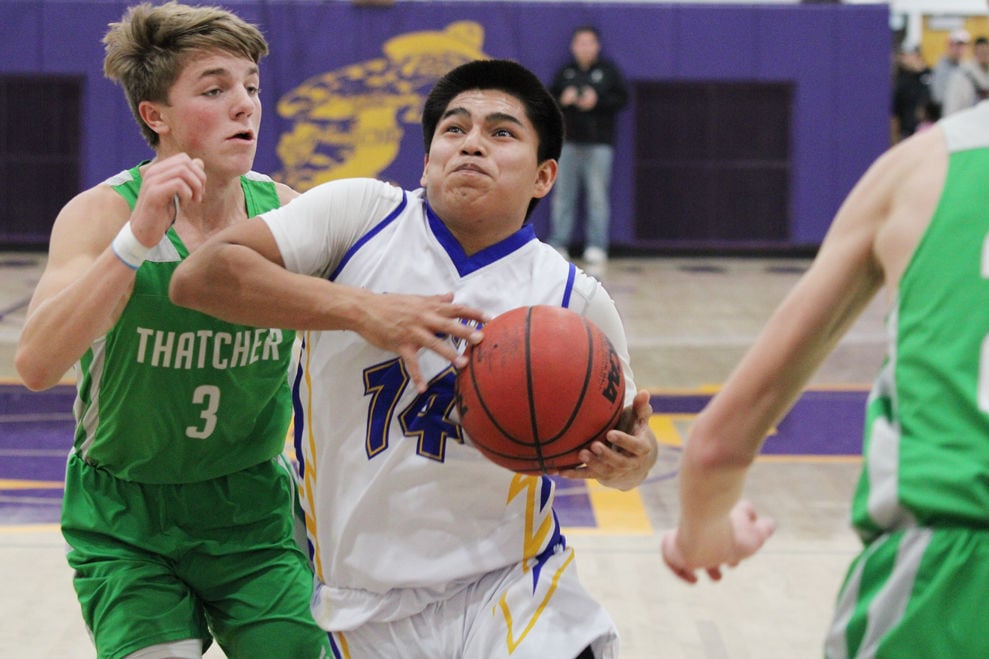 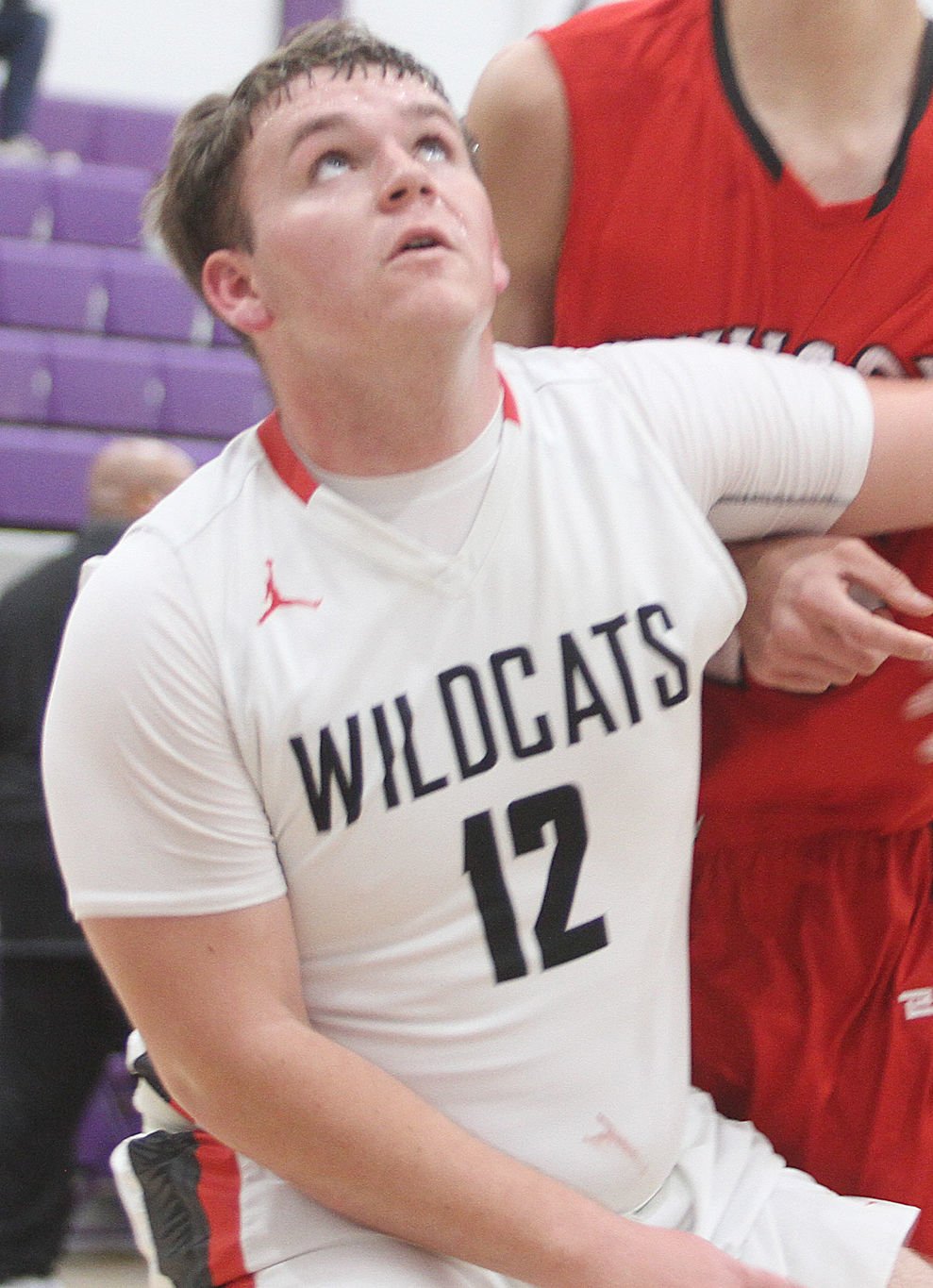 Morenci’s Dominik Waters (12) boxes out and tries to grab the rebound. 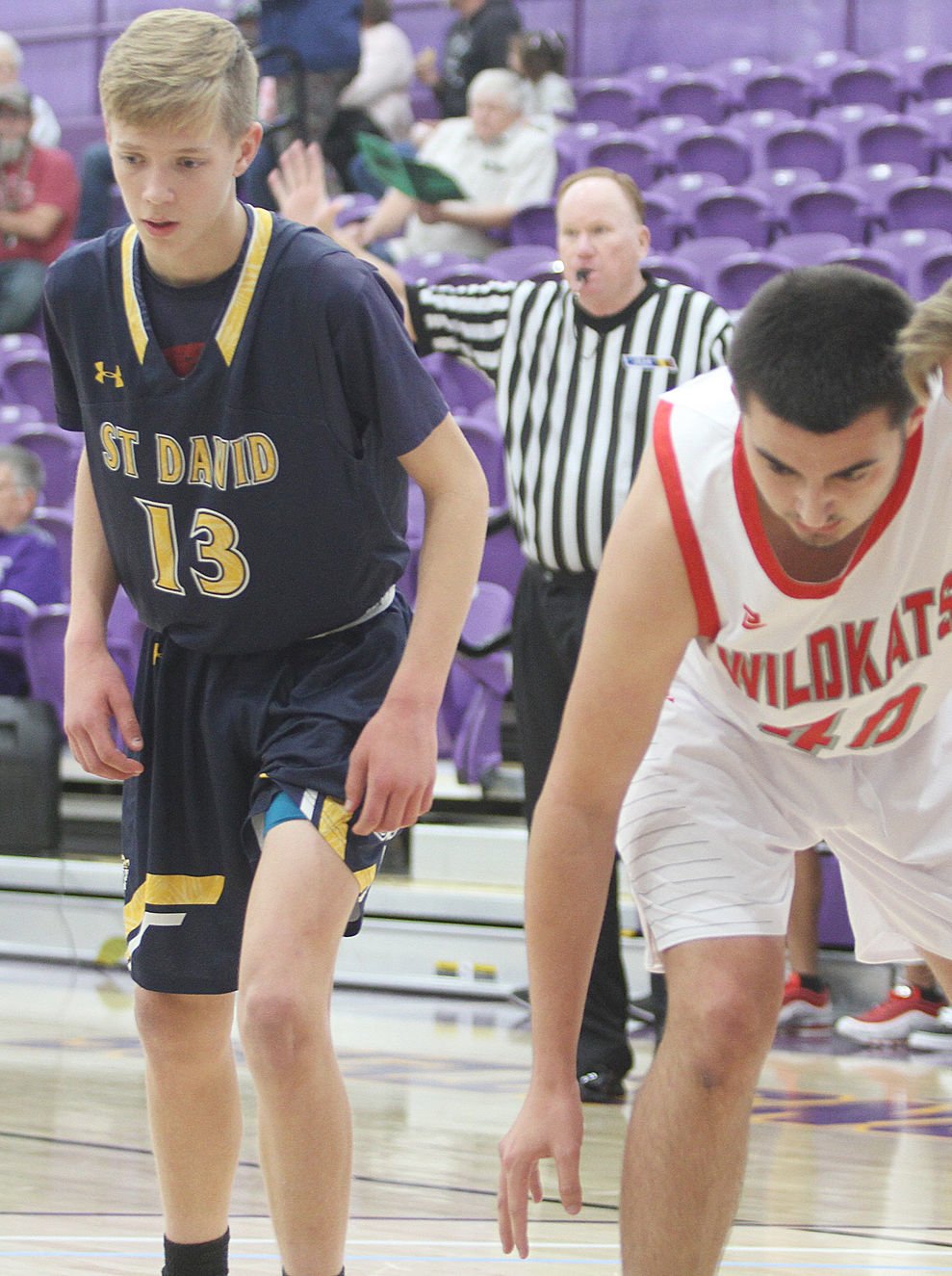 The Tigers’ Koy Richardson (13) and Wildkats’ Steven Pierpont (40) line up during a free throw in the first quarter. 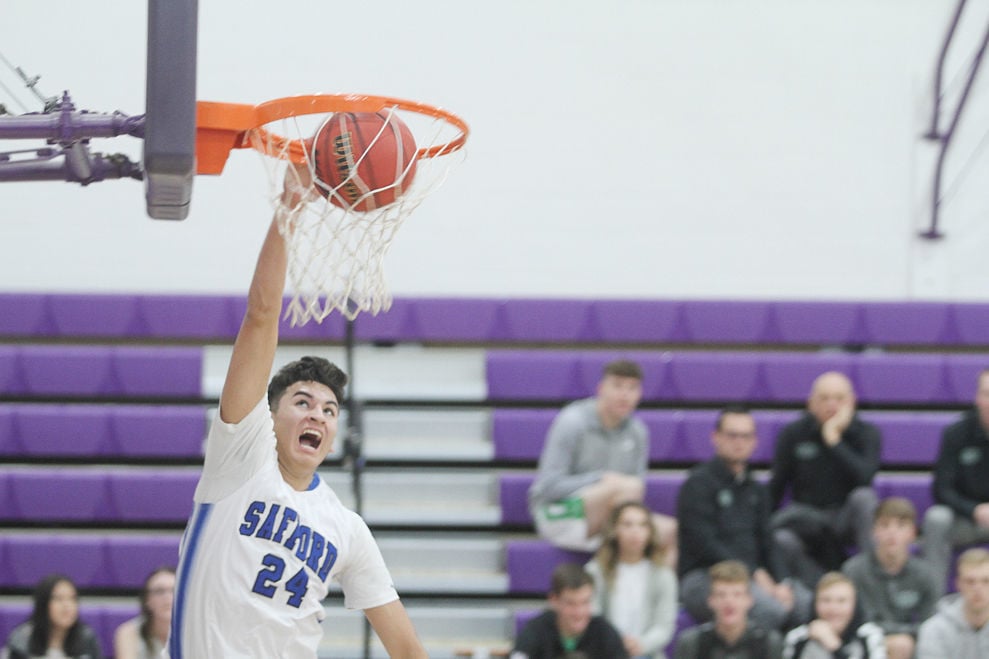 Safford’s Jejdrique Chavez (24) slams the ball home in the second half against Morenci. 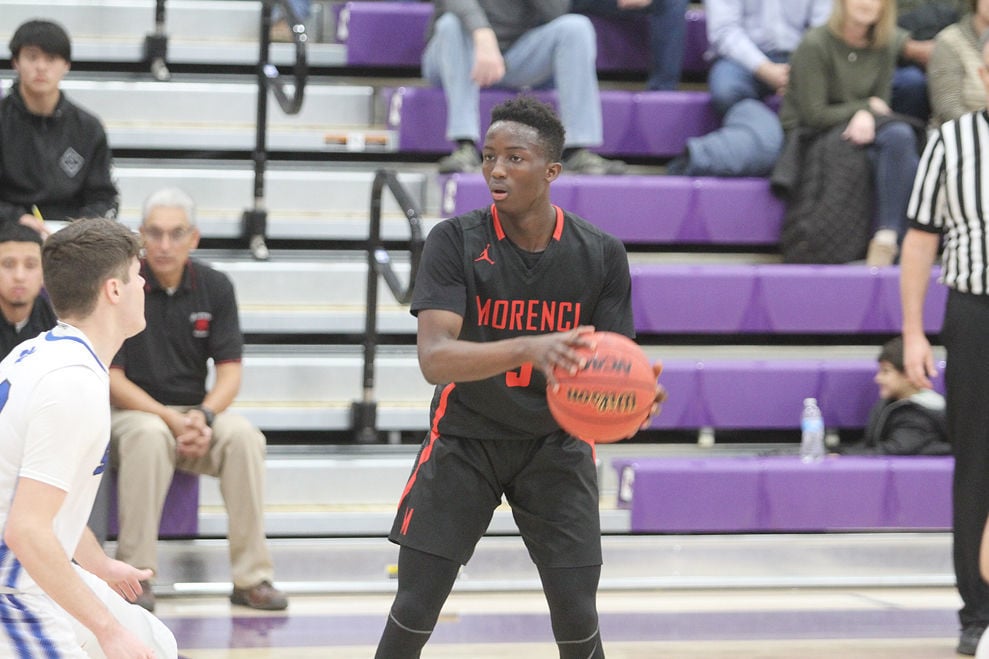 Morenci’s Christian Mutengela (5) looks to pass in the third quarter. 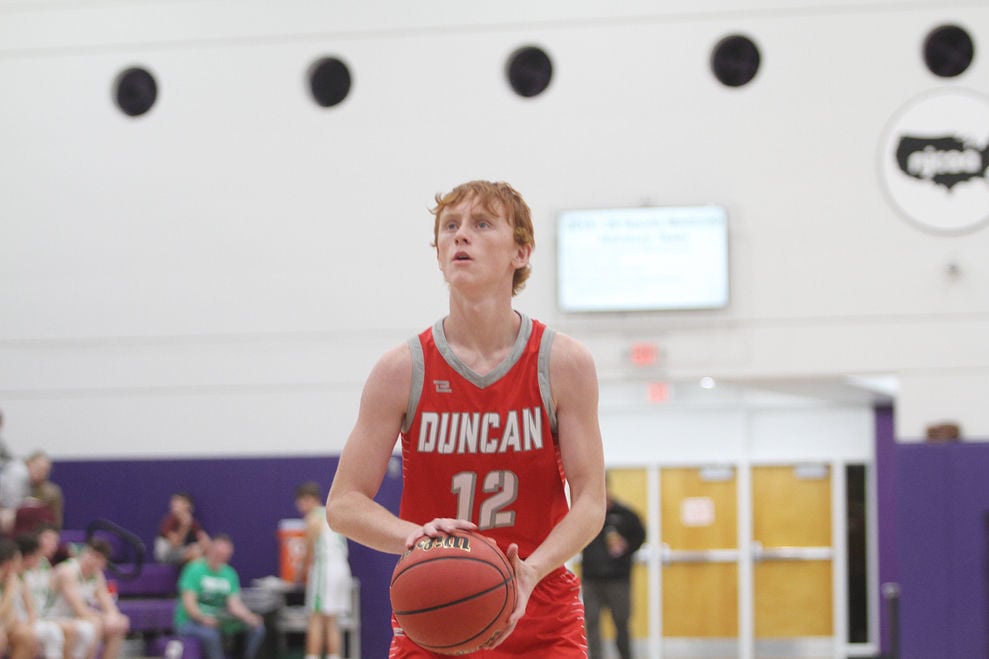 Duncan’s Jason McGrath (12) shoots one of his two free throws in the fourth quarter.

The Cowboys’ JJ Lunt (14) pulls up for a shot in the second half.

Thatcher is all smiles as players show off their first-place trophy.

Fort Thomas poses for a photo with the second-place trophy.

Morenci’s Dominik Waters (12) boxes out and tries to grab the rebound.

The Tigers’ Koy Richardson (13) and Wildkats’ Steven Pierpont (40) line up during a free throw in the first quarter.

Safford’s Jejdrique Chavez (24) slams the ball home in the second half against Morenci.

Morenci’s Christian Mutengela (5) looks to pass in the third quarter.

Duncan’s Jason McGrath (12) shoots one of his two free throws in the fourth quarter.

THATCHER — The defending Eastern Arizona College Boys Holiday Tournament champion Thatcher Eagles came into the tournament as the No. 4 seed, and shocked the No. 1 and No. 2 seed to retain their crown.

“Tonight, it just came down to executing, we had freshmen step up and we had a great coaching plan and everyone just executed and we just did what we were supposed to,” said Thatcher’s Collin Thompson.

Thompson had 13 points in the game.

Both teams were evenly matched right up before the game started, but after the whistle blew, the Eagles were flying past the Apaches, going on a 14-2 run. The Eagles could do no wrong, hitting open jump shot, getting offensive rebounds, and holding the high scoring Apaches offense to just 2 points.

The Eagles’ Michael Greer hit two early 3-point shots and dug an ever-deeper hole for the Apaches to climb out of in the early first half.

Greer finished with 14 points as well as being awarded the MVP of the tournament.

The Apaches struggled early on, missing open shot opportunities and just shooting ice cold from the 3-point line. With two minutes into the second quarter, the Apaches’ Cameron Anderson hit a 3-pointer, giving them their first points in more than nine minutes of basketball.

With Thatcher out playing and out hustling Fort Thomas, it looked to be a smooth sailing game for Thatcher as the Eagles went into halftime up, 28-12.

To start the second half, the Apaches put it into another gear, forcing the Eagles to turn over the ball and score on transition. The Apaches went on a 10-4 run. After Fort Thomas started to get their rhythm, they went to their center Latrell Titla, who scored 6 straight points and had two big-time blocks, helping Fort Thomas rally back from being 18 points down to just 5 back.

In the early fourth quarter, both teams exchanged a few baskets and turned the ball over as well. Fort Thomas made the game interesting, but Thatcher kept its cool and hammered home the victory.

“During halftime, my teammates and I were giving each other motivation and kept our head’s up going into the second half. We seemed to get it together but just fell short,” said Fort Thomas’ Skylar Kindelay.

Early in the day, six other teams played in the final round of the tournament.

A sold-out gymnasium, close games, overtime and an upset is how it went down for day two of the Eastern Arizona College holiday tournament.

Willcox and Morenci tipped off the second day in a close battle. Morenci beat Willcox, 51-44.

“Today I feel like our team came out (and) we gave a lot more effort then we have all year. We broke a four-game losing streak, which is a great thing for us. Overall, today was a team win,” said Morenci’s Maddux Martinez.

Martinez finished the game with 15 points.

Exchanging baskets and lead changes throughout the game, both teams were trying to find their niche and take home a victory. The Cowboys were banking on their big man, Rico Lunt, to pull down the rebounds and score over the smaller Wildcats. Lunt finished the game with 19 points.

Halfway through the fourth quarter the Wildcats went on an 8-2 run and found their momentum and force the Cowboys to take hard shots, which led the way to a Wildcats victory.

“Most the time, I think it was just us not taking care of the ball. We speeded things up and we didn’t slow things down as we did at the beginning,” Lunt said. “We didn’t pass the ball as early as we should have and we had open looks, we just didn’t hit them early enough.”

In the second game of the day, Duncan and St. David took the court to try and redeem themselves from day one losses.

Before the game Duncan’s head coach, Eldon Merrell took a moment to speak with the Eastern Arizona Courier about the upcoming game.

“Today is going to be fun, always tough competition, so we will see how it goes,” he said.

Duncan started on fire, going on a 5-0 run putting the pressure on St. David early in the game. Duncan’s Jarrett French had the hot hand, knocking down an early 3-pointer.

After being up early by 7, St. David knocked down a big 3-pointer to get within reach of Duncan. But, late in the second half, Duncan took advantage of St. David turnovers. Meanwhile, the Wildkats’ big man, Steven Pierpont, who was able to knock down a few key hook shots and pull down the offensive rebound to give the Wildkat’s second opportunities and lead them to victory.

No. 2 Fort Thomas took on No. 3 Safford in a tense, back-and-forth game that was up for grabs until late in the fourth quarter.

“Being able to get my teammates open, we went on a roll and play good defense and having good communication and getting those offensive rebounds,” said Fort Thomas’ Brad Johnson.

Johnson had 16 points for the night.

Exchanging baskets and trying to counter their opponent’s mistakes the Apaches and Bulldogs were neck-and-neck in the first quarter, with the Apaches up, 11-8, going into the second quarter.

To start the second quarter, the Bulldogs took the lead after they went on a 9-0 run. But late in the first half, Fort Thomas center Latrell Titla took the game into his own hands, scoring 6 straight points and bringing down four rebounds, that brought his team within 3 points going into halftime.

Titla finished the game with 18 points and 10 rebounds.

With Safford up, 30-27, to start the third quarter, the Bulldogs turned up the heat, going on a 10-0 run that gave them a 10-point lead over the Apaches.

Going into the fourth quarter, the Apaches came together to go on a 7-0 run, bringing them within 2 points. The faster Apaches guards and their stingy defense helped them to force turnovers that led to points and the championship game Wednesday night.

Saving the best for last, several lead changes and a game that went down to the wire drove the crowd wild.

“My teammates and I all came together and we know that we can play. We just had to show it off here,” said Thatcher’s Brandon Napier.

Napier finished the game with 16 points.

Thatcher who had the advantage, 18-14, heading into the second quarter. But Pima started to find its rhythm when the Roughriders went on a 9-2 run, giving them the lead.

Pima’s Drew Thompson had 10 points in the first half, which helped his team take a 32-27 lead heading into halftime.

In a tight third quarter, the Roughriders were able to keep their composure and take a 43-38 lead over the Eagles going into the fourth quarter.

The Eagles started off the fourth quarter a little differently on defense, putting full-court pressure and trapping the Roughriders, forcing the ‘Riders to turn the ball over and take bad shots.

Thatcher took the lead back when Collin Thompson had back-to-back steals that led to a 3-point lead over Pima. With 1:35 left in the game, Pima hit a big 3 to tie the game.

With seconds left in the game, both teams had problems at the free-throw line, leading to overtime.

Trading baskets early into overtime it was the Eagles’ Bradley Curtis knocking down four free throws, who led the Eagles to upset the Roughriders

Dunks, fast breaks and blow out scores was the mixture for day one of the Eastern Arizona College 57th annual Boy’s Holiday Tournament.

“Tonight, we went out as a team, building our confidence and playing hard. (We’re) just doing what our coach told us,” said Safford’s Trett Wiltbank.

The Bulldogs started the game off with a bang and didn’t let up, going up, 21-10, in the first quarter. Things didn’t get any better for the Wildcats in the second quarter, as the Bulldogs went on a 15-0 run, going up 36-14 heading into halftime.

In the second half, the Bulldogs started putting on a show when the big man Jordan Turner blocked a shot that led to a fast break and a one-handed dunk from Jejdrique Chavez, bringing the crowd to their feet.

Two offensive plays later, Turner took the ball to the hole and threw down a dunk of his own, helping Safford move on to the second round.

“All the teams have been playing in the summer and fall, and we got a new coach. We need to put this game behind us and start all over tomorrow,” said Morenci’s Shawn Michael Chavez.

The final game of the evening was No. 4 Thatcher vs. No. 5 Duncan in a one-sided match.

“We were happy on the way we performed and looked to do the same in the next round,” said Thatcher’s Bradley Curtis.