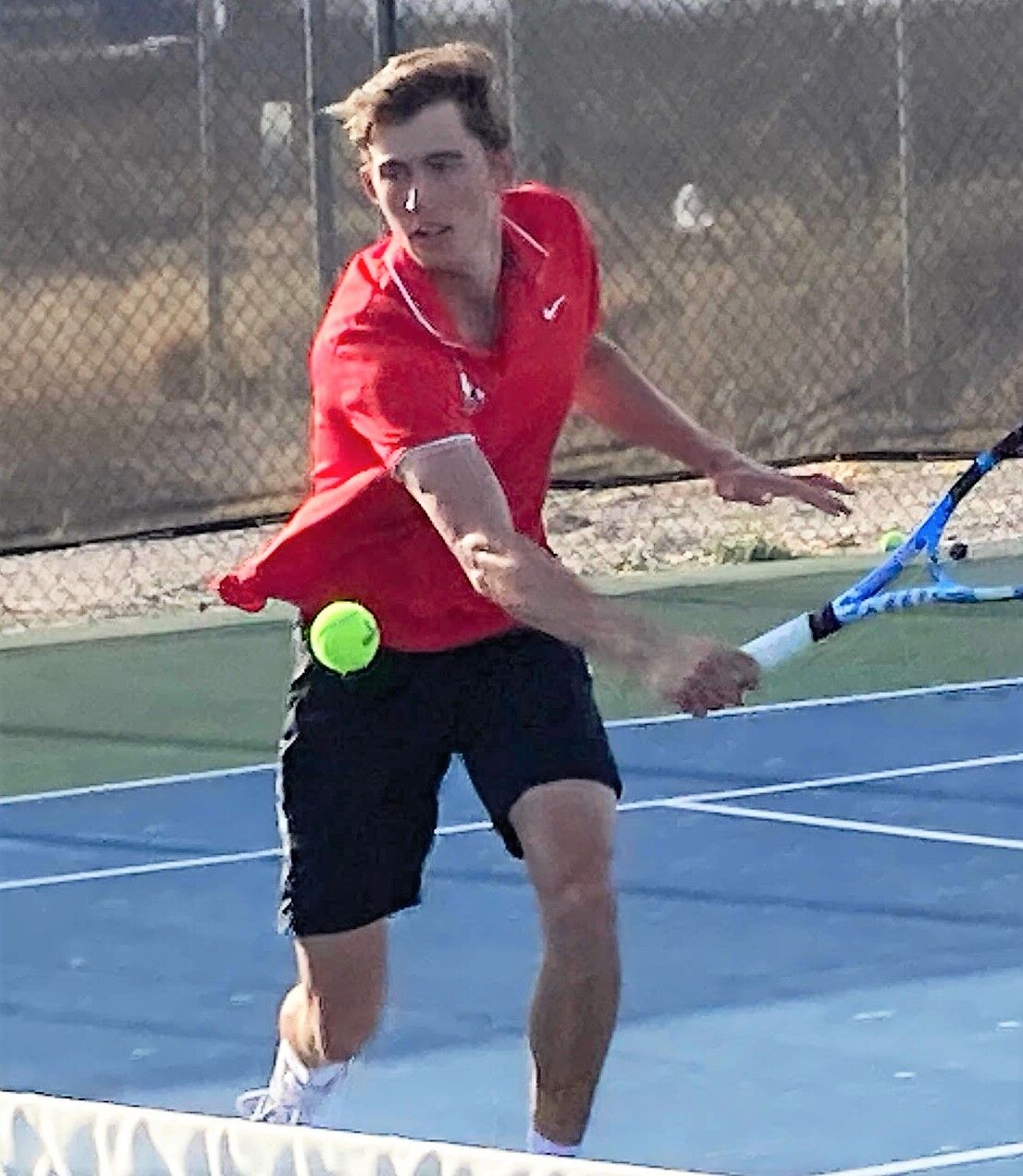 Senior Luke Kauffman, possibly the best high school tennis player in Willcox history, is living up to the hype while leading the Cowboys to a high ranking midway through the season. 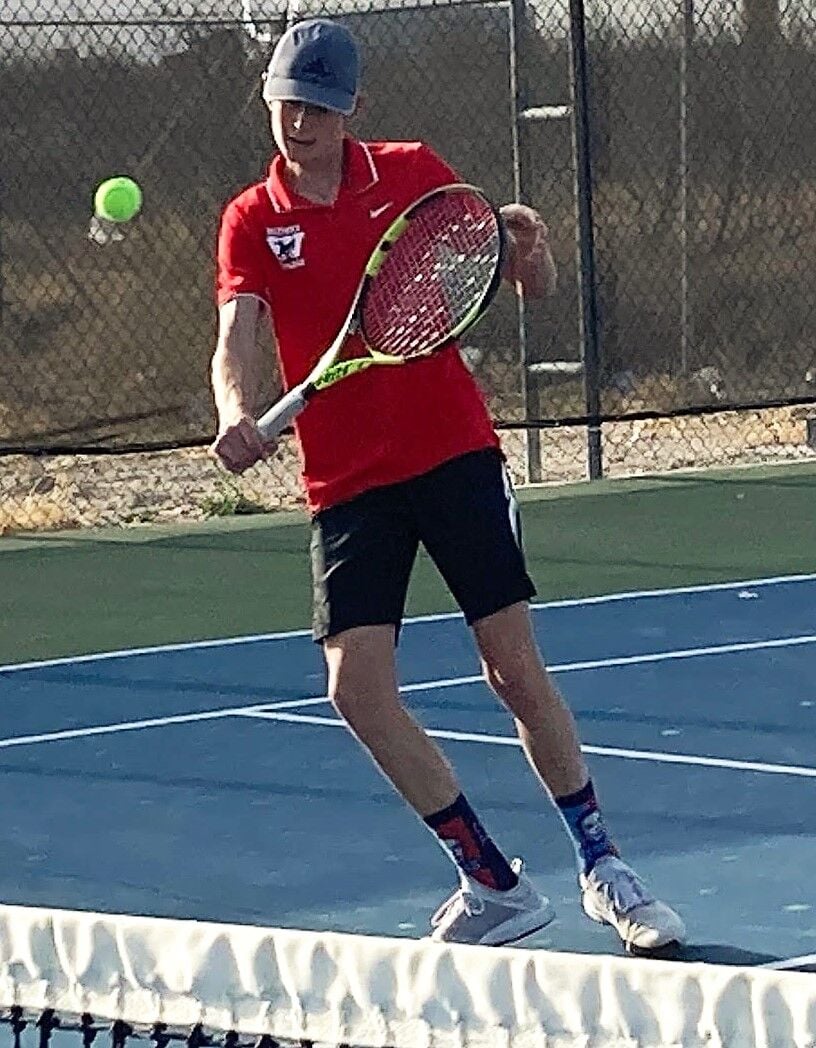 A freshman may also rise, as Jacob Kauffman (5-0), Luke's younger brother, is a key to the team's success.

Senior Luke Kauffman, possibly the best high school tennis player in Willcox history, is living up to the hype while leading the Cowboys to a high ranking midway through the season.

A freshman may also rise, as Jacob Kauffman (5-0), Luke's younger brother, is a key to the team's success.

WILLCOX - The first, best chance at tennis glory in over a dozen years could come to the Willcox program this season.

The Cowboys, led by number-one singles player Luke Kauffman, are off to a 5-0 start in their 12-match season and lead their region.

The last Willcox team to qualify for state was in 2005. The highest finish for individuals was a third-place doubles finish for the 2007 duo of Flach and Levine.

The home schooled Kauffman duo this season are off to a 4-0 doubles start and plan on competing in doubles in state if they qualify, which is likely.

“They’re not just talented. They have a great work ethic,” Chapman said.

“Now that we’ve racked up a couple of fun wins, I think we have a lot of hope that we will be able to finish strong this season,” Luke Kauffman said. Luke arrived on the scene last year as a junior and was poised to make a run at state before the COVID-19 pandemic put a halt to all spring sports.

“I think everyone is confident that the system will hold up and we’ll get to finish this season,” he said. “It was disappointing but we had to deal with it in all aspects of our life.”

Despite a recent 8-1 singles loss to St. David rival Jordan Merrill, Kauffman enjoyed seeing his team excel mostly without him.

“I was very disappointed in myself for about half an hour after that match because I got embarrassed. But it wasn’t really about me, it was about the team and I had another match to play,” he said. “Thankfully, I was playing with Jacob and he really brightened my spirits and we went out and played one of the best doubles matches we ever had. We communicated well and didn’t let the wind or Jordan’s serve bother us and won 8-0. “

The boy’s team went on to beat St. David 7-2 as No. 3 and No. 4 players Hunter Childers and Marcus Barba won big matches and have thrived at those positions. They could have been the No. 1 and No. 2 players if the Kauffman’s hadn’t come out of their home-schooled shell.

“There’s no egos involved. I feared that at first,” Chapman said. “But, Luke has been an awesome teammate. He’ll help them with strokes and spends a lot of individual time with them. The kids love him and respect him. He loves them as well and has a dedication and passion to help them.”

“It feels great to see where we’re going and I’m really proud of all of our individuals,” Kauffman said. “I or Jacob or John can only do so much. As an example, we played Safford a couple of weeks ago and we won both boys and girls. Coach said that has not happened in his memory.”

The girls are off to a 4-1 start, also new heights for their program.

Kauffman cited their win at Safford as a real confidence builder and number-two singles player Sydney Hanson’s match as a highlight.

“She, with 50-plus people watching on the only active court match, pulled off an unbelievable comeback,” he said, “and played out of her mind. She was down 7-2 and won the next seven games for a 9-7 match win (and 5-4 team win). It was a real celebration from our side. I think it’s a turning point, as they haven’t lost since Benson because they are fundamentally solid and they want to get better.”

Kauffman’s leadership and inspiration has also had an effect on his freshman brother, who has competed at elite age-group tournaments around the southwest, but who loves the team concept of playing for the high school, too.

“He set a pretty good bar for me to clear and I feel like if we can get a reputation for the school we can help make Willcox more than a drive-through town for tennis,” Jacob Kauffman said.

“Jacob is a blessing to adding a whole new dimension to the boy’s team,” Luke said. “In a way, this experience is more casual for us. My main focus has been the team as a whole because it is so much more fulfilling to accomplish something with a group of people than just as an individual.”