Valley Union pitcher Jace Mitchell collides at home plate with his former teammate, Nate Ellison of Tombstone, as Ellison attempts to score in the top half of the first inning of the Yellow Jackets' game with the Blue Devils Wednesday in Elfrida. Ellison was out on the play. 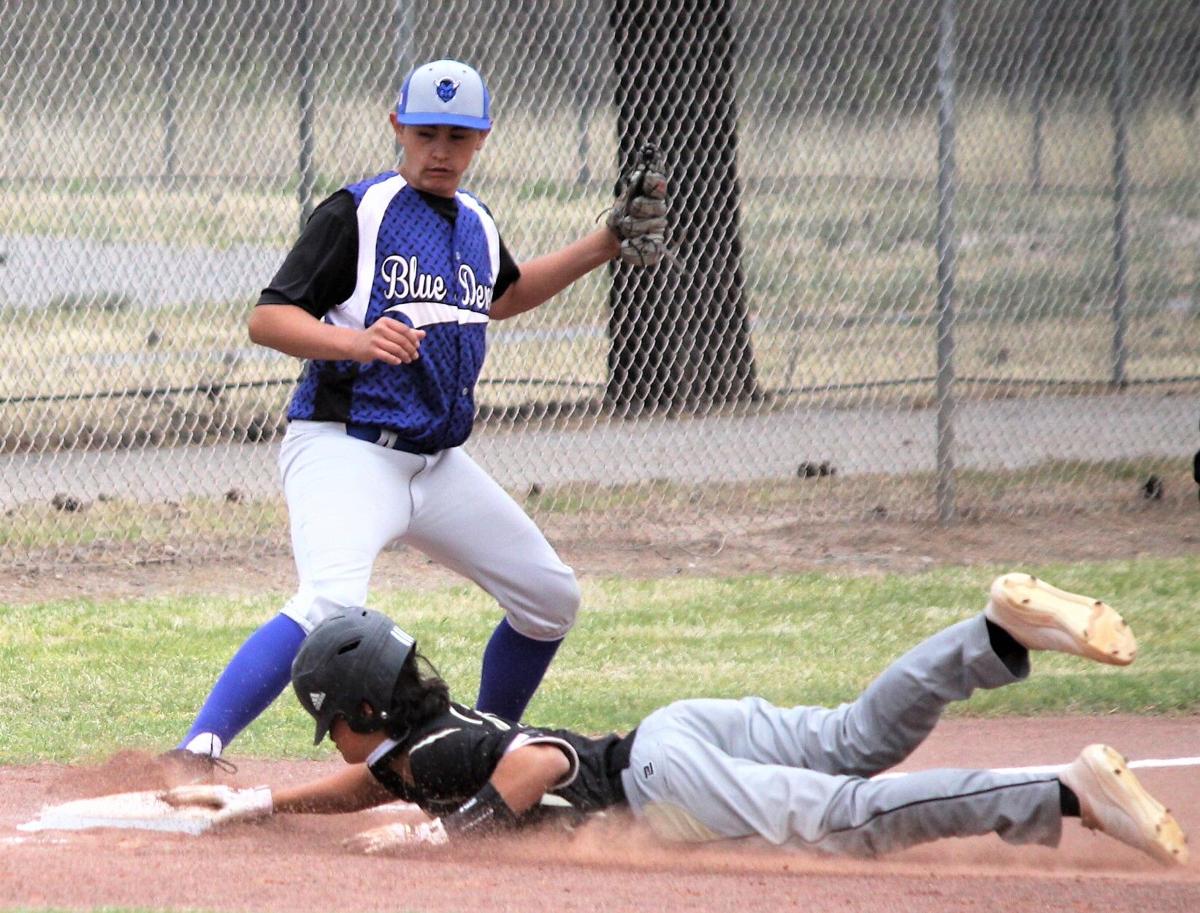 Tombstone's Gabe Garcia slides safely into third base ahead of the tag from Valley Union's Elijah Riesgo Wednesday in Elfrida.

Valley Union pitcher Jace Mitchell collides at home plate with his former teammate, Nate Ellison of Tombstone, as Ellison attempts to score in the top half of the first inning of the Yellow Jackets' game with the Blue Devils Wednesday in Elfrida. Ellison was out on the play.

Tombstone's Gabe Garcia slides safely into third base ahead of the tag from Valley Union's Elijah Riesgo Wednesday in Elfrida.

ELFRIDA — The 2A Tombstone Yellow Jackets knocked off the 1A Valley Union Blue Devils 15-1 in five innings Wednesday in a non-region game.

The win was the fourth straight for Tombstone, currently ranked third in the state among 2A teams. The Yellow Jackets began their win streak April 21 with a 12-0 win over Patagonia. Two days later the Yellow Jackets knocked off the Blue Devils in Tombstone 26-3. The day before the game with VU, Tombstone had edged Willcox 10-7 in a 2A South regional game in Willcox.

In the rematch on Wednesday, Tombstone had back-to-back five-run outbursts in the first and second innings, taking a 10-0 lead.

Three runs in the third followed by single runs in the fourth and fifth increased the Yellow Jackets’ lead to 15-0.

VU scored its lone run of the game in the bottom half of the fifth when Angel Vasquez had his first hit of the season, scoring JJ Valenzuela from third to make the score 15-1.

“I always worry about having a letdown coming off a big game (with Wilcox) and playing a team we know we should beat the next day,” Tombstone coach James Milligan said. “But our boys showed up ready and excited to play today. Having Jace (Mitchell, pitcher for VU) in the opposing dugout is probably a little extra motivation for us. Jace was a big part of our team the last couple of seasons, a good ballplayer and a super kid. We miss him and I have a lot of respect for him as a person and ballplayer.”

Tombstone had 13 hits and was led at the plate by Zekiel Esparza, Cash Finnell, Nate Ellison and Gabe Garcia, who each had two hits. Esparza also had two RBIs. Cesar Canez, Alejandro Canez, Brandon Redenbo, Miles McClain and Joel Esparza each had one hit.

Canez and Ellison both pitched for Tombstone and combined to allow the Blue Devils one run and three hits while striking out five.

Mitchell, who transferred to Valley Union during the offseason, started the game on the mound for the Blue Devils. He threw one inning, was tagged for five runs, fanned two and walked three. Levi Lawson threw three innings in relief before yielding to freshman Elijah Riesgo.

Mitchell, Vasquez and Larius Two-Moons each had one hit for Valley Union.

After the game Valley Union coach Dusty Vasquez said his team came out flat and never got going.

“You can’t do that against a good team like Tombstone,” he said. “I would have liked us to have played a little better.”

In the Yellow Jackets’ win over Willcox, Tombstone used a three-run first and two-run second to take a 5-0 lead. Host Willcox came back and scored twice in the bottom half of the third and once in the fourth, pulling within one at 5-4.

Tombstone countered with two runs in the fifth and sixth and one in the seventh for a 10-4 lead. Willcox scored three runs in the bottom of the seventh.

“This was a very good game for us, a game that we felt we needed to win,” Milligan said afterward. “We did very well jumping out to a 5-0 lead in the first two innings but then we had a couple of poor innings where we didn’t hit and let them back in, taking a slim 5-4 lead into the top of the fifth. Our kids did a great job responding, scoring in each of the last three innings. Our pitching and defense were good and our bats came alive.

“Willcox gave us all we could handle, they did a great job putting the ball in play and taking our pitchers into deep counts, fouling off pitches. They are a young but very talented and well-coached team. Most of their losses were close games and we feel fortunate to have taken both of our games with them in close contests this year.”

Tombstone, 13-2 overall, 8-2 in both conference and region, concluded its regular season Friday with a road game at St. David.

Valley Union, 2-10 overall, 2-6 in conference and 1-2 in region, will host Desert Christian Friday in Elfrida before ending the season next week with a Tuesday road game at Patagonia followed by a Wednesday home game against the same team.