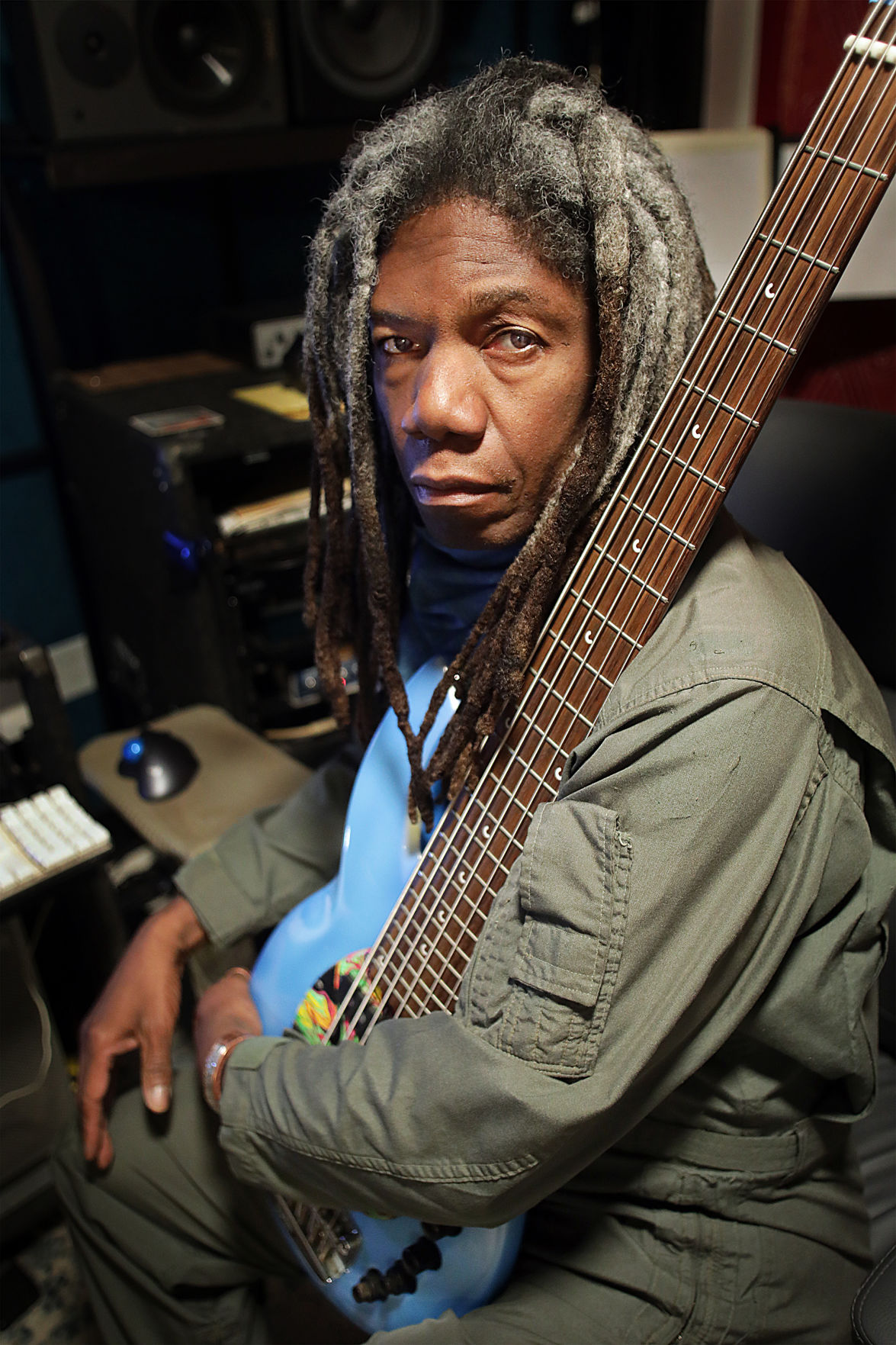 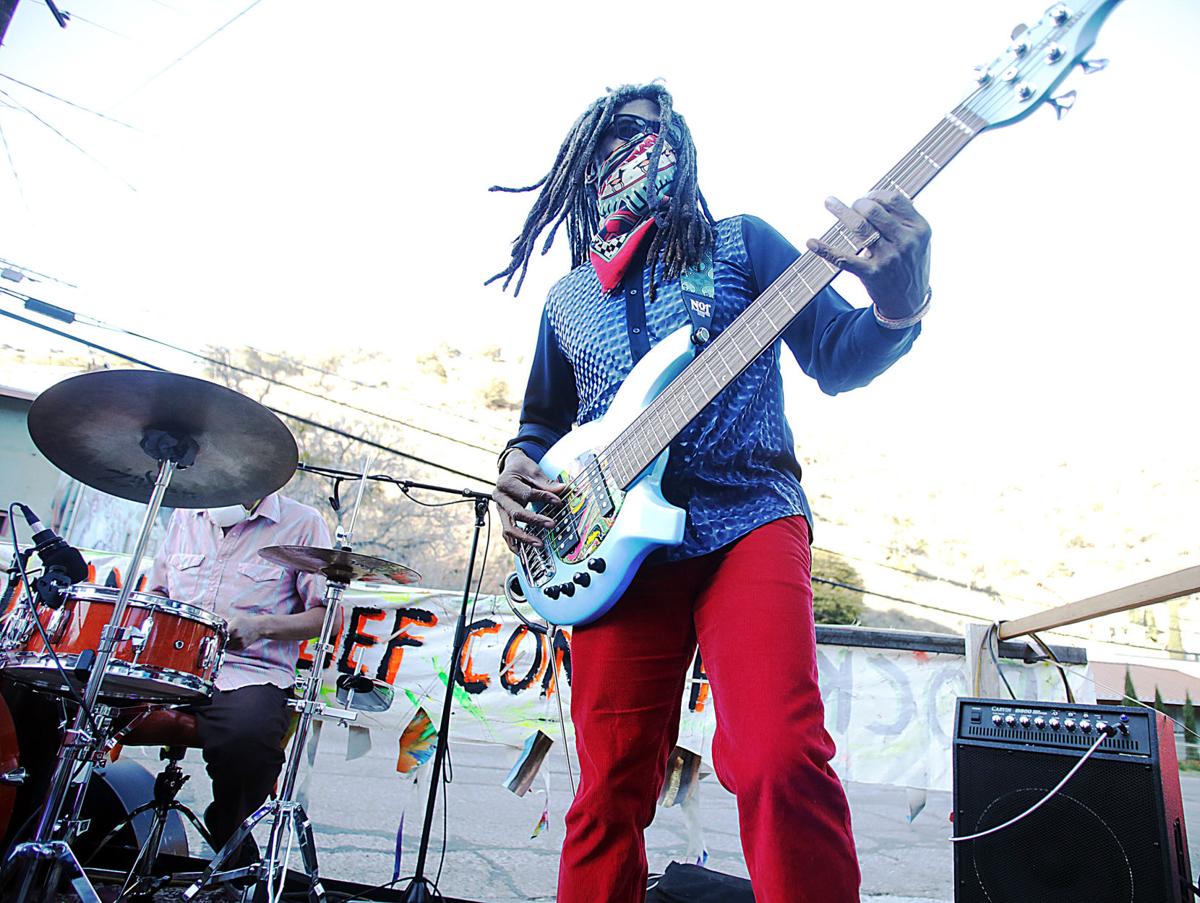 Musician Philip Bynoe performs during the Rock-N-Rolling Relief Concert through the streets of Bisbee in March. 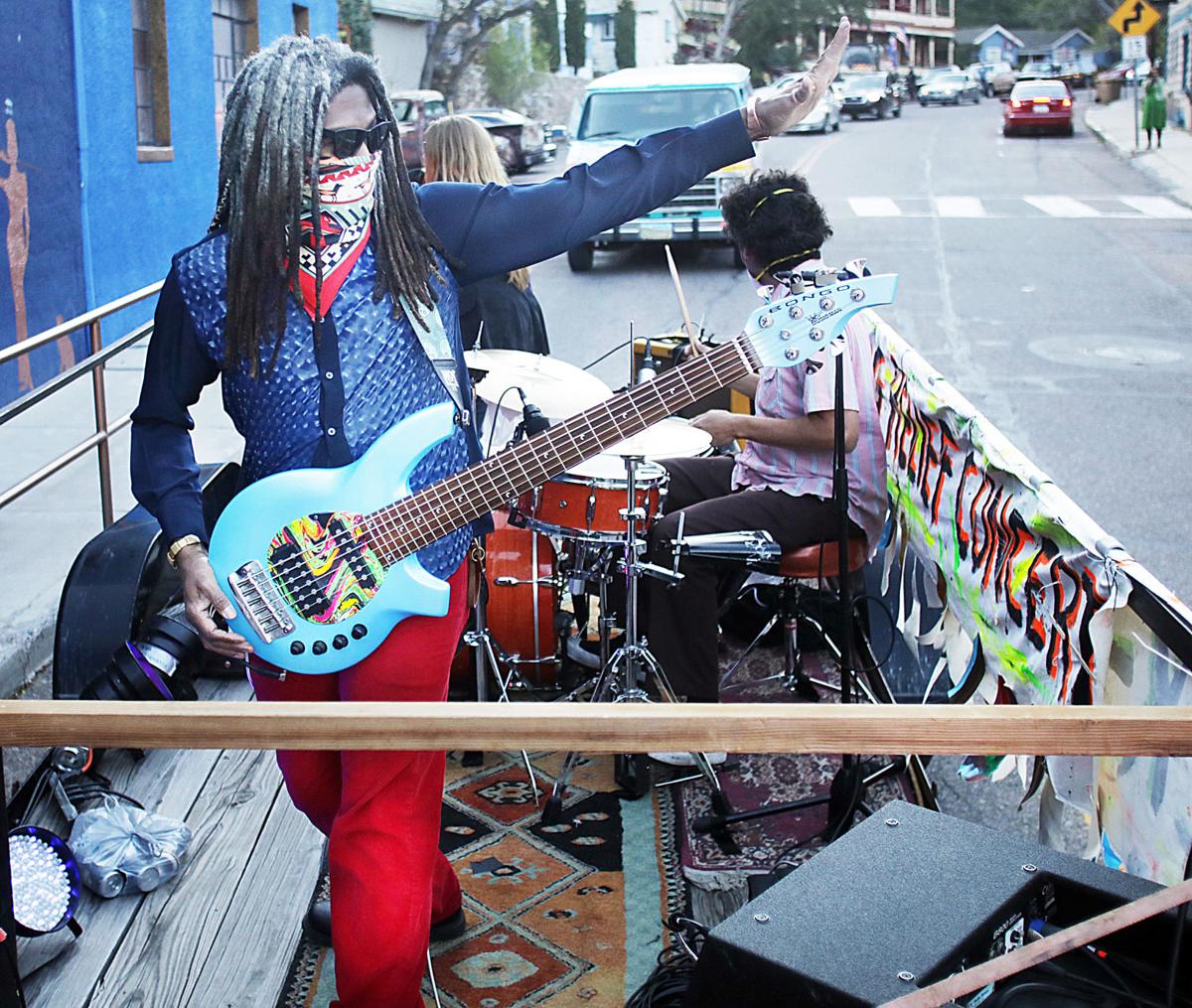 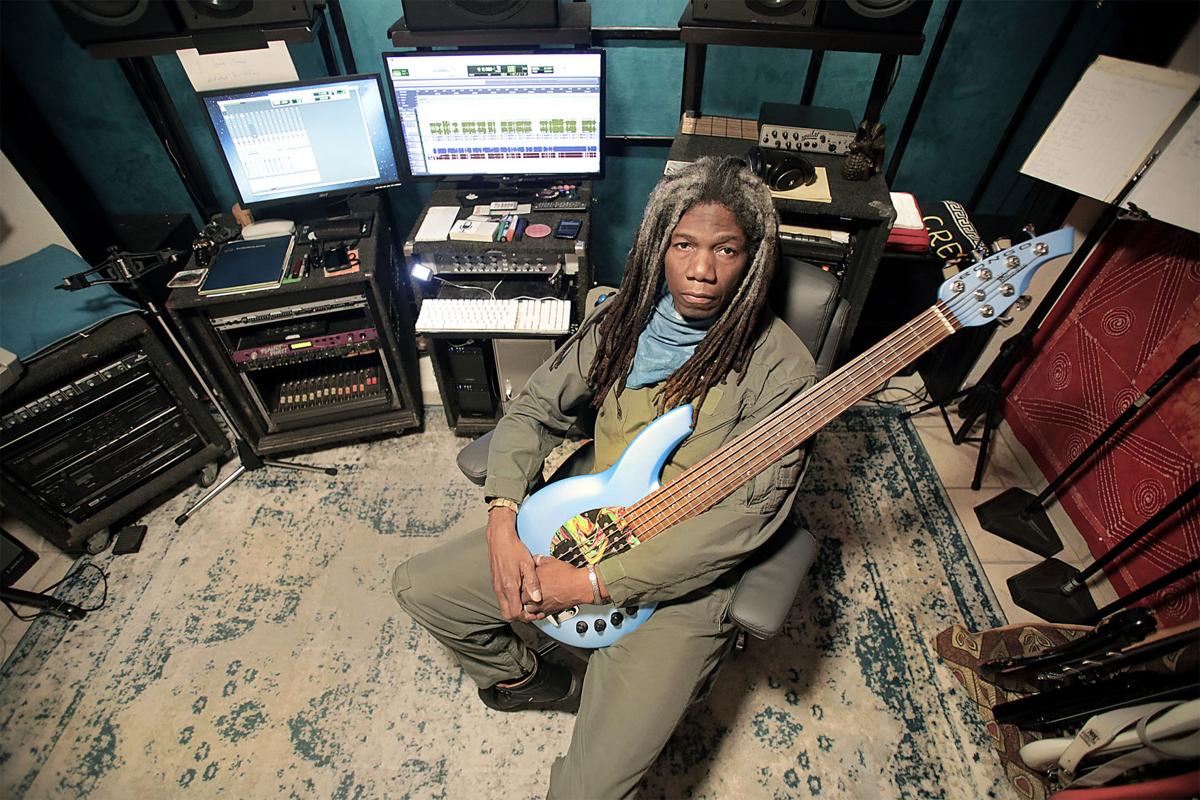 Musician Philip Bynoe performs during the Rock-N-Rolling Relief Concert through the streets of Bisbee in March.

What a month this has been. It feels like not long ago, yet at the same time, eons ago, we were talking about the uncertain fate of Bisbee’s entertainment scene. The town, which usually boasts seven nights of music a week, has become much quieter due to the coronavirus pandemic.

In the past, great art has come from adversity, and it’s been nice talking to different musicians, seeing how they’re using this downtime.

Earlier in the month, I played a “moving concert” through Bisbee with, “guitar hero,” Melissa Reaves and Steve Vai bassist, Philip Bynoe. I sat down with Philip to get his take on the last month and learn a little bit more about his story.

I met up with Philip at his recording studio in Bisbee, nestled in the basement under his Tombstone canyon home. The space is small yet spacious, and has everything Philip needs to create music. Call it a music bunker of sorts. Various guitars, basses, an upright bass of his father’s, and a cello that belonged to his mother are among the precious objects adorning the walls of one room.

An attached control room has all the computers, keyboards and gadgetry one would need to produce an album or three.

I wanted to touch everything. Since it wasn’t my house and, because of the whole worldwide pandemic thing, I didn’t go there. No back to back guitar action or “Aerosmith style” mic sharing either.

Our meeting was of course in full adherence to the current “6 foot” rule and masks. We start at the beginning of Philip’s musical journey.

“I started playing when I was 6,” he tells me. “My mother played cello and my father played bass, and I wanted to be like him.”

“I actually started playing cello first, because they said ‘you’re not big enough,’” he goes on to explain. Philip began getting cello lessons while eventually “growing” to meet the size requirements of the bass, then pursued it as his main “axe”. Following the advice of his father, Philip also went on to pickup the six-string guitar as well.

During his “cello years,” Philip used his mother’s instrument.”She would play while she was pregnant with me,” he said. “Then she stopped playing once I was born.”

I have some other friends in musical families whose children “absorbed” music in the womb and ended up being exceptionally gifted at it. My “expert” opinion is that Philip was receiving sonic nutrients pre-birth that he would apply for the rest of his life. Umbilical bass guitar? Ok, too far.

Since 1996, Philip has been the bassist for, guitar icon Steve Vai. Steve previously played with avant-garde composer Frank Zappa and later went on to forge a solo career, including a role alongside Ralph Macchio in the ‘80s movie “Crossroads,” which I feel is a secret prequel to “Karate Kid.”

Most recently, from 2012-2017, they toured behind the 25th anniversary of the largest selling Vai album, “Passion and Warfare,” performing it live in its entirety. “His fan base is very dedicated and almost cultish,” Philip explains. The show also included visual imagery that represented different aspects of the album.

Playing bass for Steve Vai has taken Philip to stages around the world and he jokingly describes it as the job he “likes to have.”

Philip and his wife, Laurie, started visiting Bisbee in 2016 and it wasn’t long before they were house hunting.

“I really like the people,” Philip said. “They’re all on first name basis, I lived in L.A in a big apartment complex and besides my landlord, I didn’t know anyone’s name.”

Philip lists Bisbee sound engineer/contractor/welder and more, Shawnee Hicks, as someone who was very instrumental in helping them find a place and in building his recording studio. “He does many jobs, very well,” Philip said about Hicks.

My first introduction to Philip was at Studio Mariposa (Naco, Sonora), a free art program for children. We were having a Tuesday jam session with full band setup, percussion and more, featuring the kids of Mariposa. I immediately liked Philip’s loose approach to the jam, his seasoned musical ear, ability to change keys “on a dime,” and his great rapport with the kiddos.

“Since ‘92 or ‘93 , I’ve written kids songs with artist Deb Snyder. Years before I was a ‘supposed rock star,’ I worked in the school systems and helped teach an improv class called Urban Improv, in Massachusetts,” Philip said.

The improv sessions involved acting out tough situations the kids might encounter, and the consequences of different decisions. “We would create scenes as if they found a gun, or if someone tried to offer them drugs.” said Philip. “It gave them the opportunity to make better choices.”

Philip’s work with youth naturally evolved into writing children’s songs with Deb, which can be found at www.PB&Deb.com. I also discovered their music is on all of the major streaming services and YouTube. They have five albums available in different rhythms and styles. Be sure to check out “A fish goes swish swish swish” or “Zoo Dance”!

Since performing on stage in front of large amounts of closely congregated people is Philip’s main occupation, this pandemic has made it “tricky” to find ways to make a living at music during this time. Luckily, he’s gained a reputation throughout the years, playing with Steve Vai and other musicians, and has been recording remotely from his home-studio for people around the world.

“I get about 2-4 sessions per month”, he said. Philip also creates music for non-profit TV and radio ads with his wife Laurie, who is a producer in that field. “ I have to get into the online teaching thing because after this pandemic ends, the educational system and all industries will be changed. They will not go back to what they were.” Philip said.

“Nightclubs, concerts, tours...it’s all going to be different when we do get through this. We all have to adapt.”

It seems like this pandemic is the great equalizer, affecting every walk of life, from a street performer to a musician like Philip on big stages. “I really like how this town is handling this pandemic. Even though this is a small, rural town, people are taking it seriously and I think that’s important like, washing hands, masks,” Philip said.

“As a society of humans, when we do get through this, and we will, we need to say ‘these are the things that worked and what do we need to change,’ and stick with it,” he said. “I hope this will eventually unify us as a race of people. Go Bisbee!”

Mike Montoya has been a Bisbee musician for over 15 years. He can be reached at mikemontoyamusic@gmail.com.