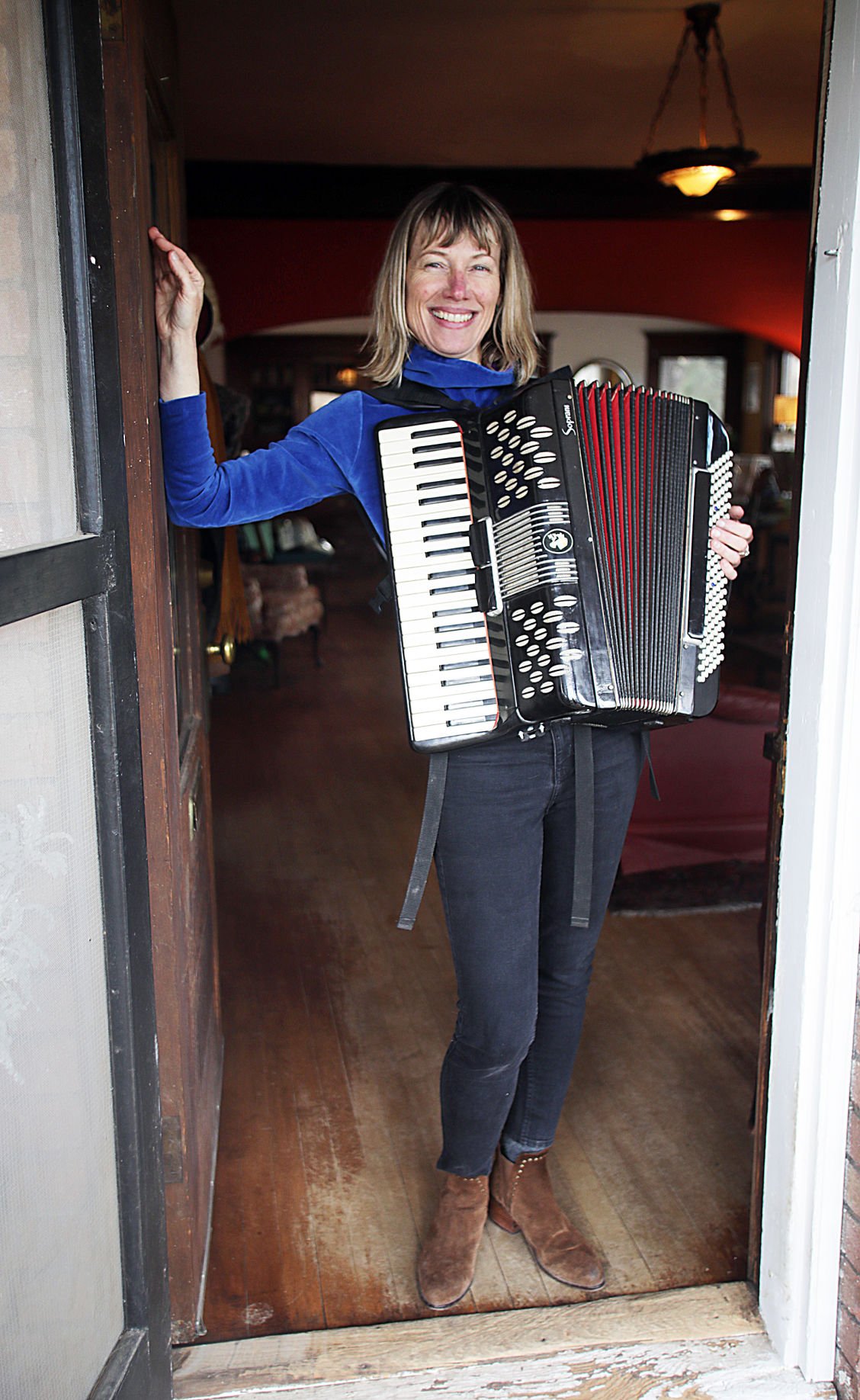 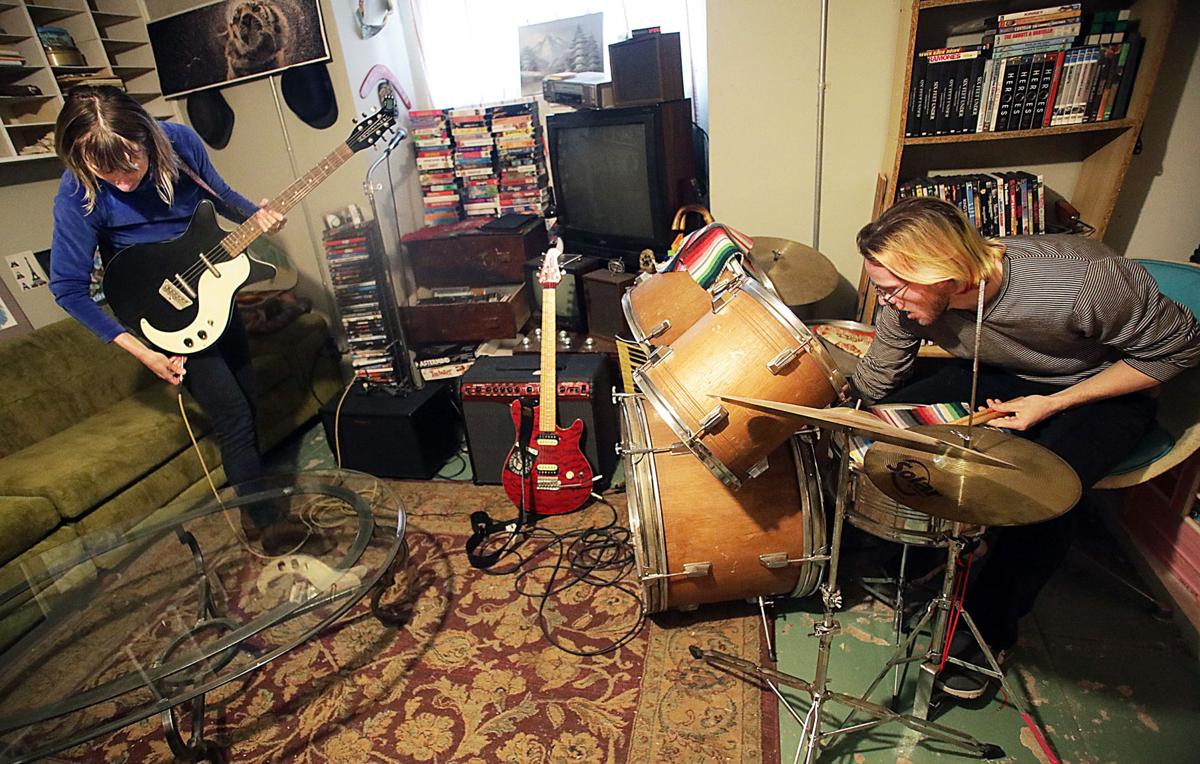 Donna Kihl prepares to jam with her son Roman recently in the basement of her home. 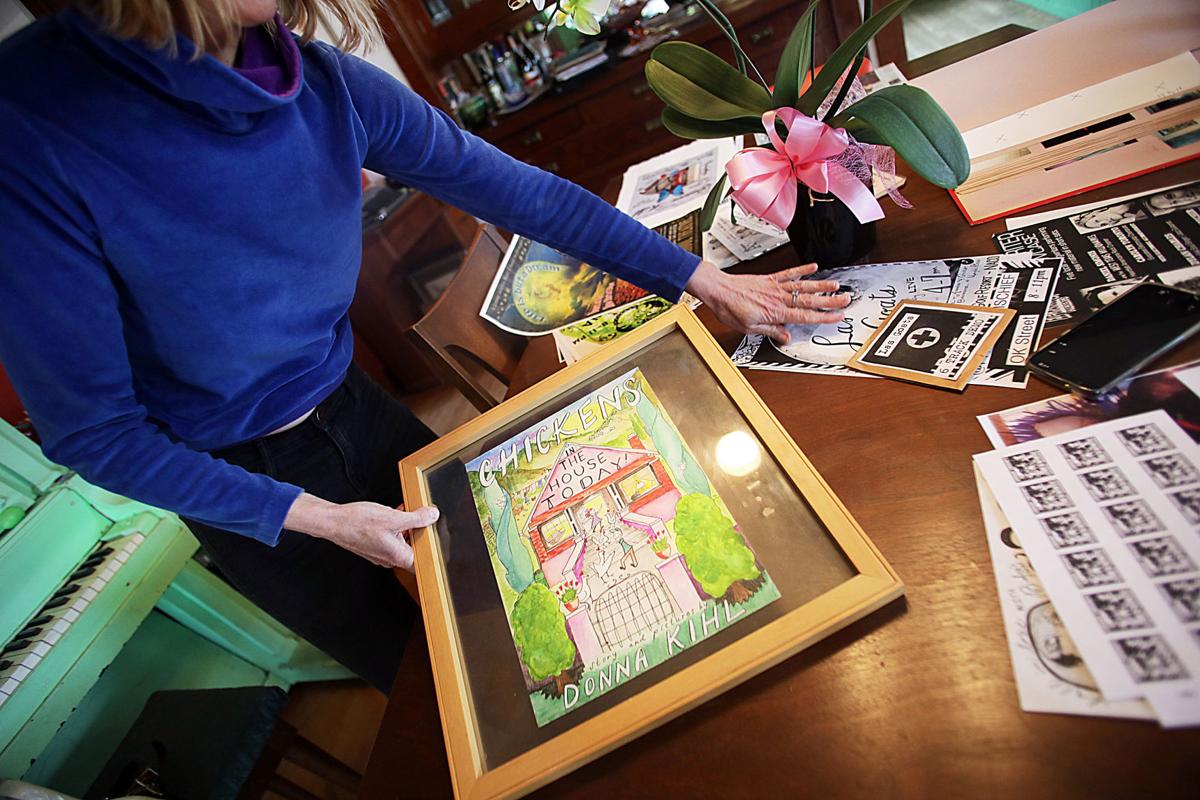 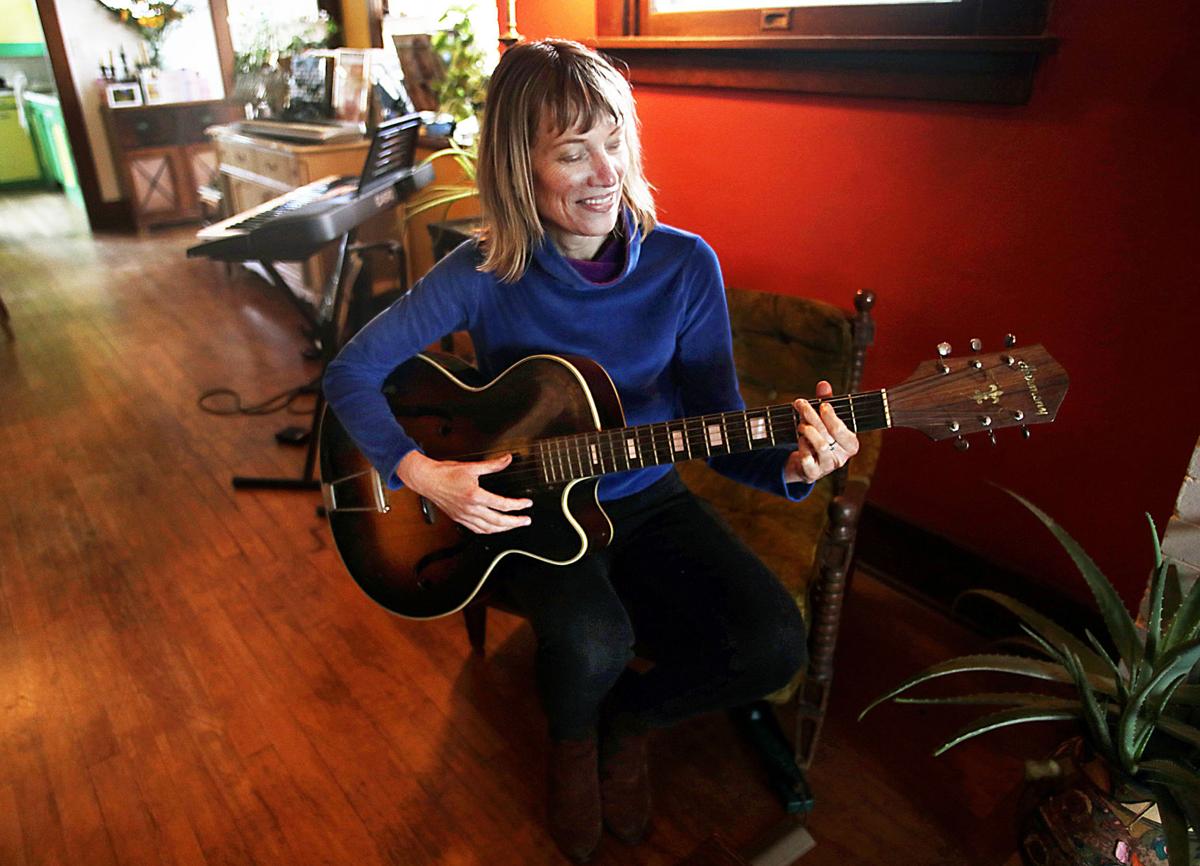 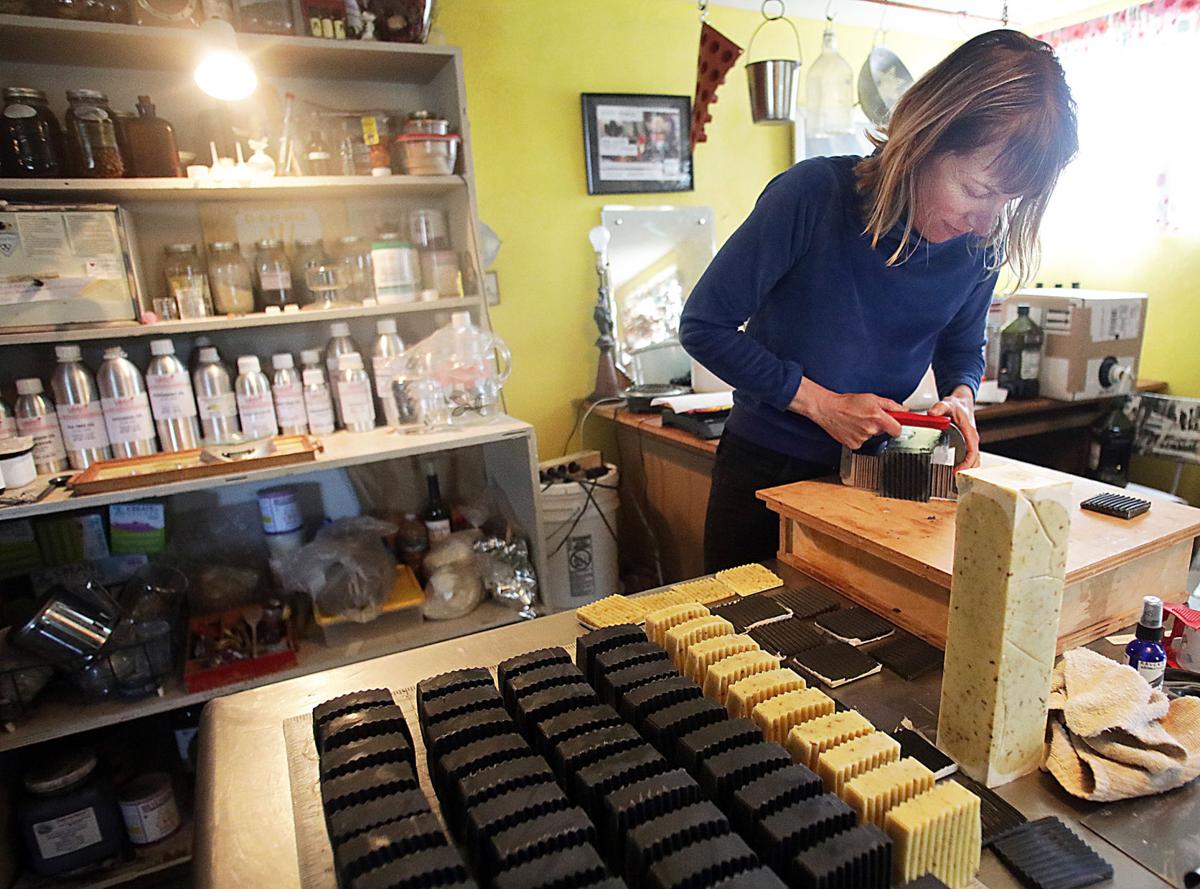 Donna Kihl prepares to jam with her son Roman recently in the basement of her home.

Music is powerful and I think it can be felt as much as heard. The funny thing is, most of my favorite music makes me feel something, but I have no idea what they’re talking about. Off the top of my head, three of my all time favorite bands — The Strokes, The Shins and The Queens of the Stone Age — might as well be humming in Klingon because most of their lyrics’ meanings are lost on me. I think, as a songwriter, I can appreciate how words simply sound together in a melody, and maybe there is some science-y explanation behind loving what you’re not “getting.”

Which brings me to Bisbee artist and musician Donna Kihl. She’s been playing music in Bisbee for about 20 years and she has been seen wielding an accordion or a guitar, singing her original songs about chickens, goats and other animals. In earlier years, she used music as a way of healing to get through the end of a marriage, and later moved onto writing about animals — but not animal husbandry (ugh, I couldn’t resist). Her eclectic music is sprinkled throughout with humor and a hint of sarcasm.

Donna recalls playing at open mics at Hot Licks, a legendary Bisbee Club, in the early 2000s. “I was pouring out my guts at the open mic nights,” she said. “Becky Reyes (a Bisbee artist and musician) was very instrumental in encouraging me to keep coming back.” Donna used the “release” of the open mics to work through personal issues and develop as a songwriter and performer.

She also found a way to express herself in drum-circles around Bisbee. I’ve had the privilege of Donna drumming along with some of my music at the Bisbee Grand and I’m surprised she doesn’t consider the drums one of her main instruments.

Donna’s first band, fittingly titled Group Therapy, came together in 2003 with a co-worker who played flute. “It was really wild, kooky funny stuff.”, she said. In what sounds like a “VH1 Behind the Music” story, The owner of Hot Licks walked in on one of GT’s practices and asked them to come play at the bar. “We became their house band, we’d play there every month for the longest time,” Donna said. Group Therapy was a collaboration of original songs with some theatrics thrown in. “We had costume changes and everything,” Donna fondly reminiscences.

Surprisingly, Donna considers the organ her first instrument. Her mother was a church organist and also taught piano. She got Donna piano lessons and they had an organ in their household. She also also grew up watching her mother play accordion, which later became key to Donna’s musical identity. She credits her mother with influencing her the most. Donna also carries on the family tradition of teaching children piano lessons.

To get up to date on Donna’s musical projects, past and present, she gave me a couple CD demos (vintage!) to listen to.

I was very impressed with the diversity between the two. One is a collaboration with Bisbee’s Ryan O’Rourke. It is dark and electronic.— somewhere along the lines of Depeche Mode and Nine Inch Nails. Donna’s haunting voice gives the electronic mix an earthy and spooky sound. With lots of layers of guitars and drum machines as the backdrop, Donna and Ryan’s voices bring the synthesized sound to a human level. I’m excited for the final release of this yet-to-be-named project.

The other demo is a live recording of Donna with a “gypsy-esque” ensemble. Her voice is at center stage, interwoven with her intricate, yet comfortable, accordion playing. My ears could be fooling me, but amongst the violin, bass, and guitar on the recording, I think I can make out a tympani player in the group. Something you don’t see in a band very often. I’m wondering if this was a Craigslist find?

Along with music, Donna has become known for her home-made soap label, “Raven’s Claw.” Her soaps contain all natural ingredients. Her products nourish and moisturize the skin, which she sees as a need, especially with hand washing recently becoming an international pastime. You can find Raven’s Claw at Kate’s Magik website www.katesmagik.com and some Bisbee locations, such as Acacia Antiques. Donna is using this “pandemic down time” to build her online presence, including her own website for Raven’s Claw.

Another fun project Donna is working on during this time is an illustrated book telling the story of the aforementioned chickens. She has a soundtrack to accompany the book and she’s creating the artwork herself. This is a project she’s had “on the shelf” for years and is very motivated to finish. The illustrations are very colorful and I can already see Donna’s wit jumping off the page.

With all of her theatrical projects, soap peddling and drum-circling, Donna has managed to raise two children, Roman 21 and Eva 25, that play with her on occasion. This line-up is appropriately titled Donna and the Kihls. Roman is on drums and Eva plays guitar while also writing and performing original songs. “When she plays guitar, I play bass,” Donna explains. “It’s great.”

The Kihls have been discussing making some music videos to document their sound. I try to imagine a childhood with an eclectic artist like Donna for a mother and l look forward to hearing and seeing this family trio. I’m sure their videos will push artistic boundaries.— and hopefully involve a chicken or two.

Mike Montoya has been a Bisbee musician for more than 15 years. He can be reached at mikemontoyamusic@gmail.com.