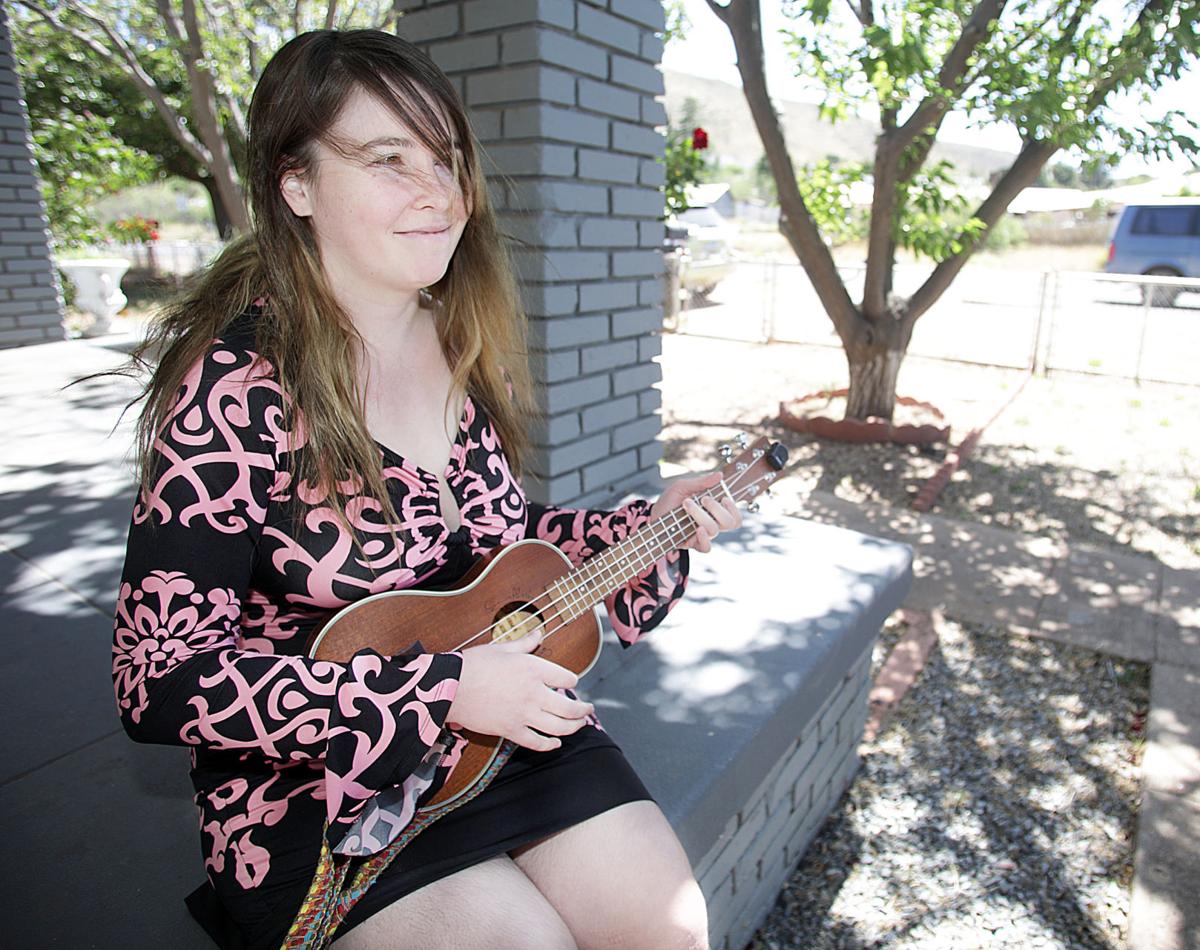 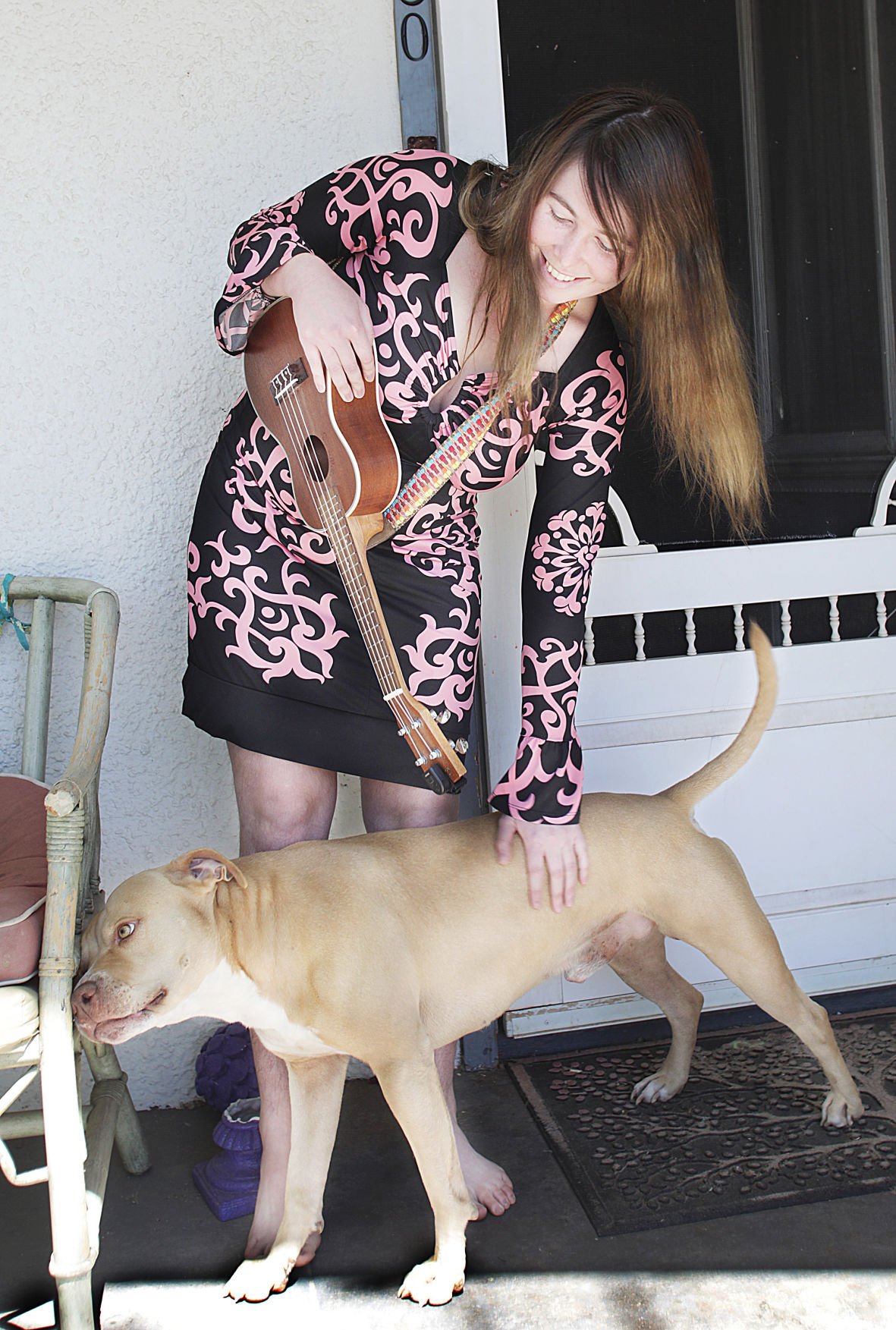 Bisbee musician Magghie O’Shea stands with her dog Arlo in front of her home in Warren.

Bisbee musician Magghie O’Shea stands with her dog Arlo in front of her home in Warren.

After traveling across the country a couple times, I’ve come to the realization that there is no place like Bisbee. The combination of great weather, art, music, old architecture, and kind and interesting people are a few of the elements that make the town stand out from others.

I’m not the only one who feels this way, it seems.

“I feel that Bisbee is a safe place to be a weirdo — a lot less judgement of people that fall outside the expected norms of society” says musician/comedian Magghie O’Shea. “I really love the mountains and the music scene. It’s really cool to be in a small town that has live music every single night of the week.”

Magghie has hopped trains, hitchhiked and seen many cities, including Prague last fall. She has been performing stand up for six years and had the opportunity to open for comics Anthony Jessleneck and “Last Comic Standing” winner Josh Blue.

“Opening for him was a pretty big honor for me,” she said. She goes on to explain that she saw Blue on TV as a child and never thought she would end up on the same stage as him.

One of the first times I saw her perform stand up, she told a joke with a punchline: “Do I look like I have $40?”

(In order to maintain the “PG-13” rating of this paper, and my job, I’ll have to leave the first part of the joke out.)

“I try to avoid blanket statements, but most comedians are cool people and most of the time when you’re a stranger going into a comedy scene where you don’t know anybody, usually people are pretty welcoming and accepting of you as part of the community,” Magghie said “Mostly, comics try to help each other out.”

Magghie takes the stage with razor sharp wit and “blush-inducing” ditties played on her ukulele. Her songs are refreshing to my ears, especially compared to the mainstream uke tunes we’ve sipped our beers on the beach to.

I once had the chance to hear her sing an opera piece and was pretty blown away at how refined and different it sounded from her usual material. Not to take away from her songs. Magghie is able to convey a pretty good variety of emotions with just voice and ukulele.

Her lyrics are about as clever as they get. “I don’t know if you can put this in the newspaper, but my first song was called ‘F%&! Meth,’” Magghie said. “It was kind of a simple little ditty about how meth is bad.”

She goes on to explain, she hadn’t really seen the methamphetamine problem until she moved out west to Slab City in California from Connecticut.

“When I saw people going crazy on this drug and throwing glass bottles at each other, I thought, ‘Oh I should write a song about this.’”

One of Magghie’s autobiographical tunes is called “The Machete Song,” which stemmed from her solution to being catcalled and harassed while hitchhiking. Since it seemed to be an ongoing issue, she resorted to traveling with a machete in plain view.

“Being visibly armed with a machete can really help you deter creepy predators,” Magghie says with a chuckle. Her song recants this tale with a super catchy chorus.

“I think most women have experienced catcalling and street harassment. I know I definitely have,” she explains. “(With the machete) I was only getting picked up by really cool women and the creepy men were suddenly repelled by me.”

Some of Magghie’s compositions have been written outside during times she was homeless. She is pretty open about her time living on the streets and even in a cave. I read a short story she posted on a Facebook a couple years ago about one night, which detailed a time she produced and performed at a comedy show at the Royale Theatre in Bisbee, then went to sleep in the cave.

I was instantly sucked in to her story telling style. I was also impressed that she was describing the cave, but not in a complaining kind of way. It seemed like she was taking pride in both scenarios.

“While I was homeless, I came through Bisbee a few times and lived in the cave. Most of my songs were written outside. The ideas flow better that way,” she said.

“I’m not homeless anymore. I’ve been living indoors in Bisbee for a year and a half,” she says with a chuckle. “Before that, I was homeless for about four or five years. I hitchhiked and hopped freight trains around the country, slept outside. I did stand up comedy and music — my main source of income was busking with my ukulele.”

Magghie traveled through 35 states in those years. “I mostly had a good time, but there were definitely difficult times,” she said. Magghie goes on to explain that being able to play music kept her sane and productive on the road.

“I’ve been writing some new new stand-up material and playing music” Magghie said about her COVID downtime. “I’ve done a few online concerts with The Happeneers and that have been fun.” She has also performed on “The next big thing talent show,” which can be found on Youtube.

Unfortunately, Magghie had a relative pass away from the virus and has been taking the social distancing guidelines very seriously.

“It’s hard to deal with,” she explains. “My great uncle died from COVID-19, and my brother and his wife had it and recovered.”

In addition, Magghie has had a few friends test positive for the virus who fortunately have recovered.

“I have a lot of anxiety, not just about catching it, but also how the whole world will be affected by this,” she said

“It’s a good thing we haven’t been hit as hard (here),” Magghie explains. “But it’s also causing people to take it less seriously.”

Magghie has high hopes for next year about a vaccine and the possibility of “playing in front of humans again,” she says with a laugh.

For the time being, Magghie is writing new material and taking online classes, and I’m looking forward to a vaccine and her new batch of melodic hilarity.

Mike Montoya has been a Bisbee musician for more than 15 years. Contact him at mike.montoya@myheraldreview.com.