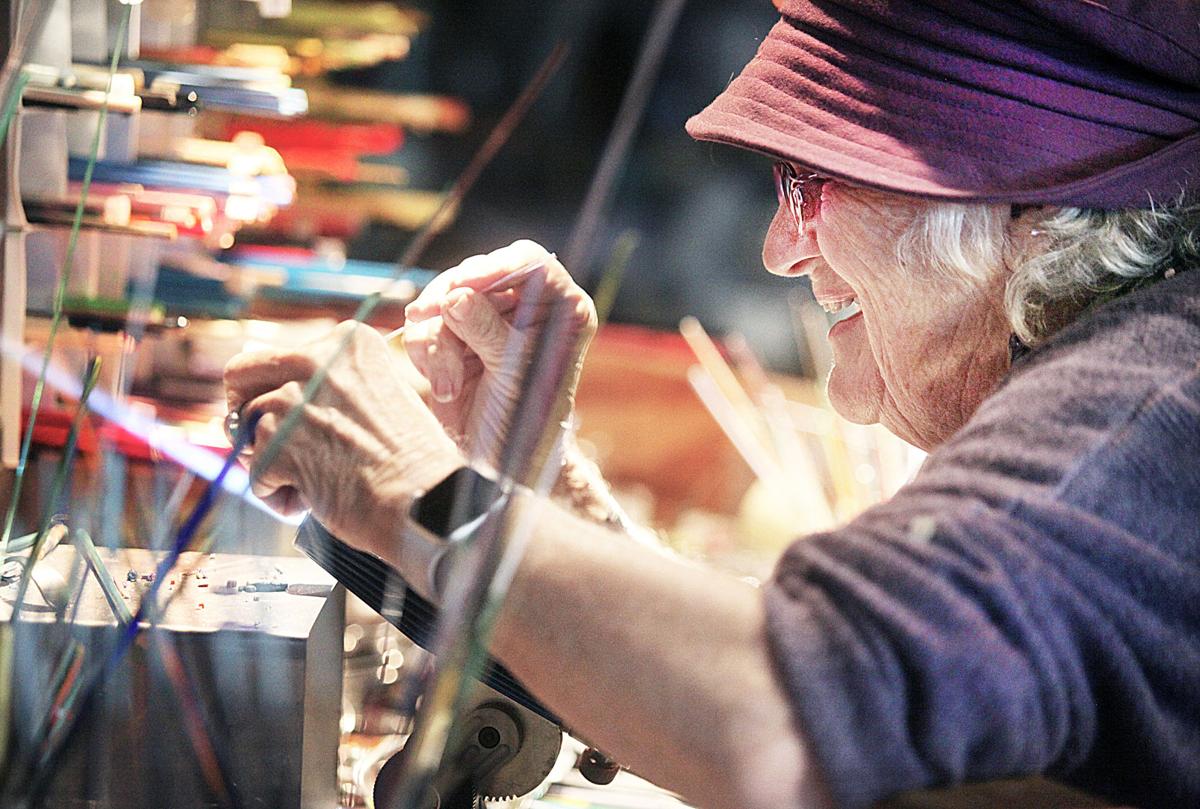 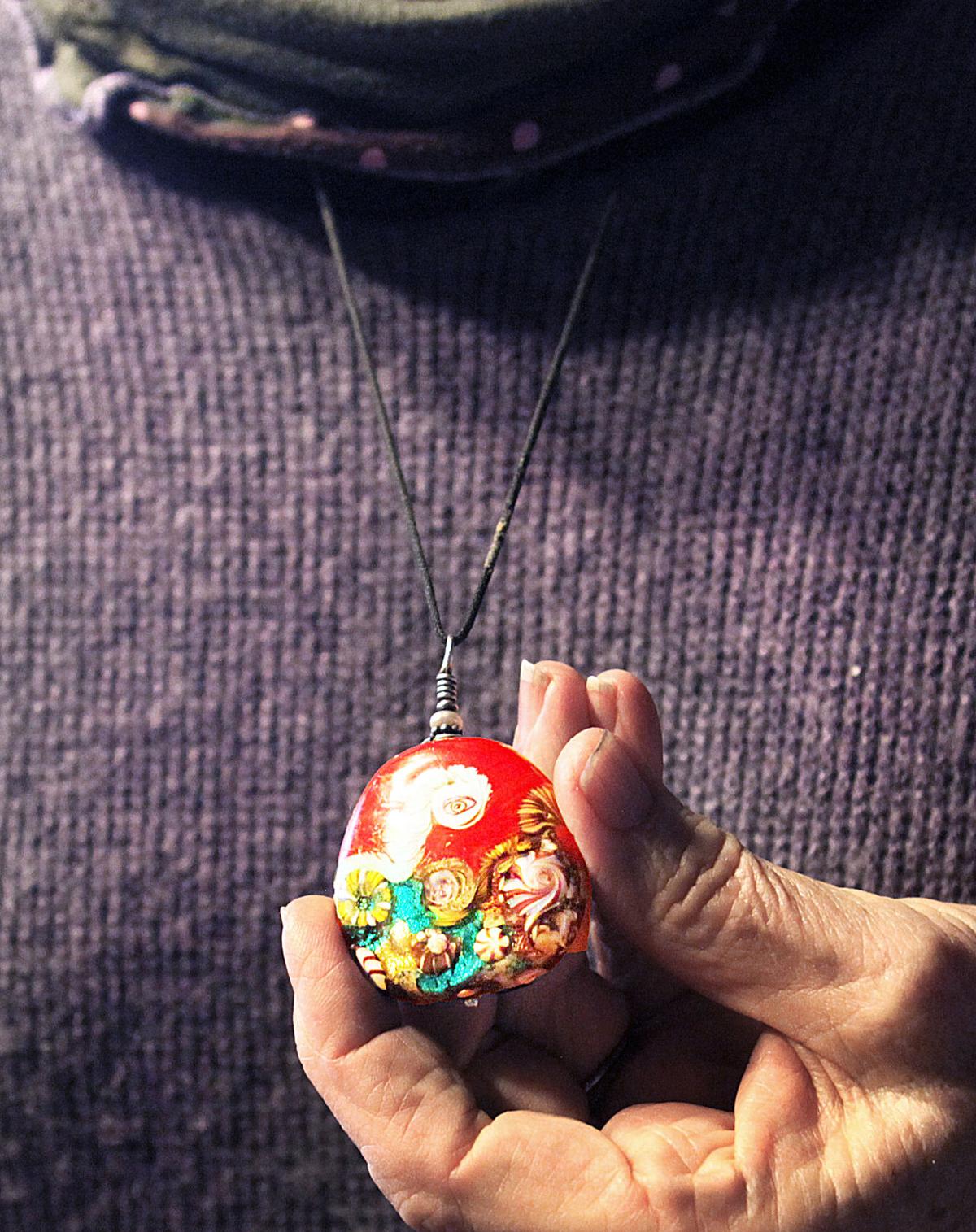 Wilkinson shows off an ornate glass sculpture fashioned into a necklace. 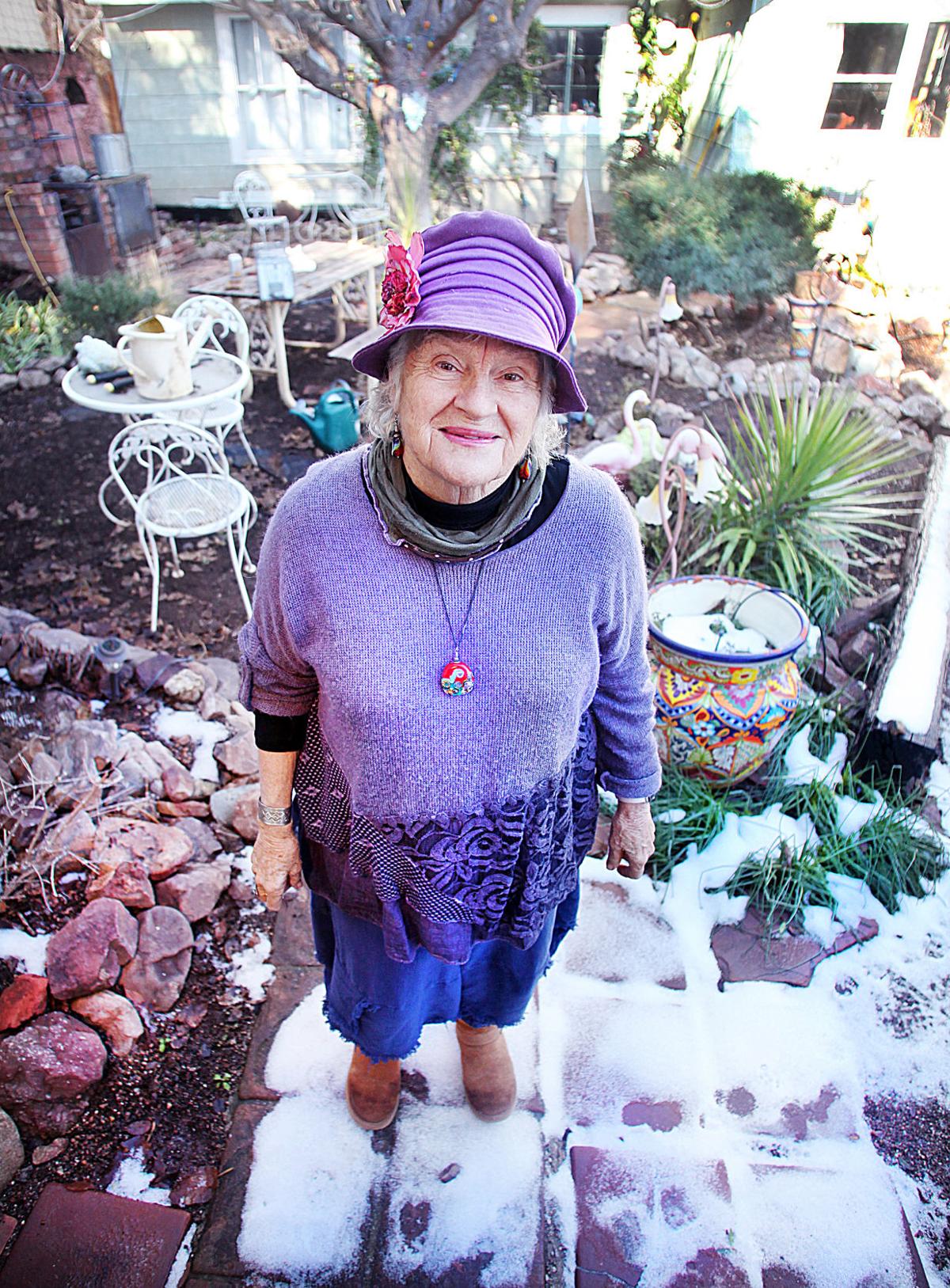 Kate Drew Wilkinson stands in the garden of her Bisbee home.

Wilkinson shows off an ornate glass sculpture fashioned into a necklace.

Kate Drew Wilkinson stands in the garden of her Bisbee home.

Artist Kate Drew-Wilkinson is 79 going on 20.

The white-haired dynamo, who says “I love being me,” is a fixture in Old Bisbee — a jewelry designer, painter and actor who has called the town home for almost three decades.

Ask this septuagenarian how often she works: “All the time. I go to bed completely fatigued.”

Wilkinson’s specialty is lampwork, the art of making beads by using a torch to melt and shape the glass. And her barn-turned-studio is a wonderland of color filled with glass bead creations in the form of necklaces, earrings, tiny leather medicine bags and mini-bottles encrusted with beads for the average love potion.

Torch in hand, she turns a piece of glass into a beautiful black and white bead in less than five minutes as she demonstrates the art of lampwork during a recent interview.

Becoming a lampwork artist did not happen overnight for Wilkinson, however. She started out as a Shakespearean actress trained in the Old Vic Theatre School in London.

In 1969, she was one of the original cast members in the controversial off-Broadway play “Oh Calcutta!” in New York City. She and the crew were featured in “Playboy” magazine, much to the horror of Wilkinson’s aristocratic parents.

But acting and the baggage that fame brings with it, was not for the free-spirited Wilkinson. “You were always at the beck and call of your agent and it was too constraining,” she said.

So she turned to making leather clothes in New York City for rock and rollers. Strangely enough, that launched her jewelry-making career, Wilkinson said.

“I needed beads for one of the outfits,” Wilkinson said. “That turned into making jewelry.”

She soon began landing work and accounts. She worked everywhere from Point Reyes, California to the beaches of Costa Rica where she made and sold her creations. Upon her return to the U.S., she began designing stone jewelry for the now-defunct Nature Company. The latter was a Berkeley based retail chain that sold science toys, art and jewelry — among other items — in retail stores in malls around the country.

She discovered the art of lampworking while attending a bead conference at the Mayflower Hotel in Washington, D.C. years ago. At the time, she was also a bead historian and was giving lectures.

“I went to the bathroom (at the Mayflower) and I saw a door with the word ‘lampwork’ on it,” Wilkinson says. “I opened the door and I saw a camera on a pair of hands, a big television screen, and someone knotting glass.”

“It was an epiphany,” she said. “From there on I went straight ahead.”

She went to Columbus, Ohio to learn lampworking from another artist.

“I learned how to light the torch, torch safety and how to wind a piece of glass around a metal rod,” she said.

She then moved to Mexico and lived in an Airstream with her husband. She stored all her supplies under the benches in the Airstream. At the time, she was still employed by the Nature Company. She was making stone and silver jewelry.

“I sent them samples of my work and they asked me if I could work with recycled glass,” she said.

The first order from the Nature Company was 450 necklaces with 30 beads in each and a deadline. Five people whom she had trained, helped her get the order done.

That was her first foray into lampworking.

Her entry into Bisbee was just as much of an epiphany as was her introduction to lampwork.

Wilkinson and her husband had decided they would live in Guadalajara. They had moved most of their belongings there, she said, “even my husband’s massage chair.”

One day they went to Tucson and decided to take a few hours to see Bisbee.

“I wanted to see a bead shop there,” Wilkinson said. “We were on Main Street near OK Street and I turned to my husband and said ‘The voice has spoken.’

“This was the last thing he needed to hear,” Wilkinson said. “I had been there for four hours and I said to him, ‘I’m supposed to live here.’”

She met a realtor and ended up purchasing the house she has lived in for the last 27 years, for $50,000 cash.

“Something must have been driving me and I must tell you, it must have been God,” Wilkinson said. “God picked up this little wild, gypsy actress artist and put her down!”

Her husband ended up going back to England.

“I’ve never for one moment regretted moving here,” Wilkinson said. “The thing about Bisbee that’s so outstanding is the word ‘love.’ We also have a magical level of intellect here. But everybody here is incredibly loving.”