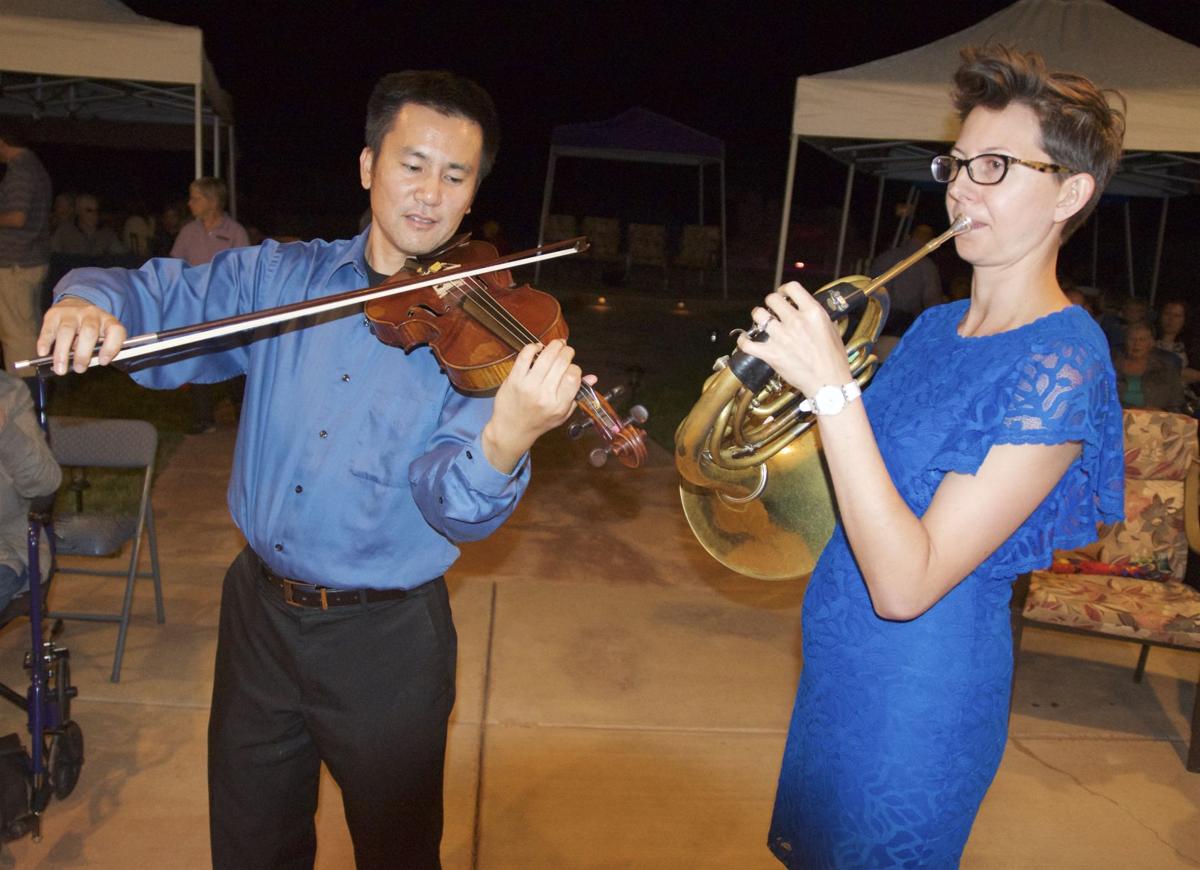 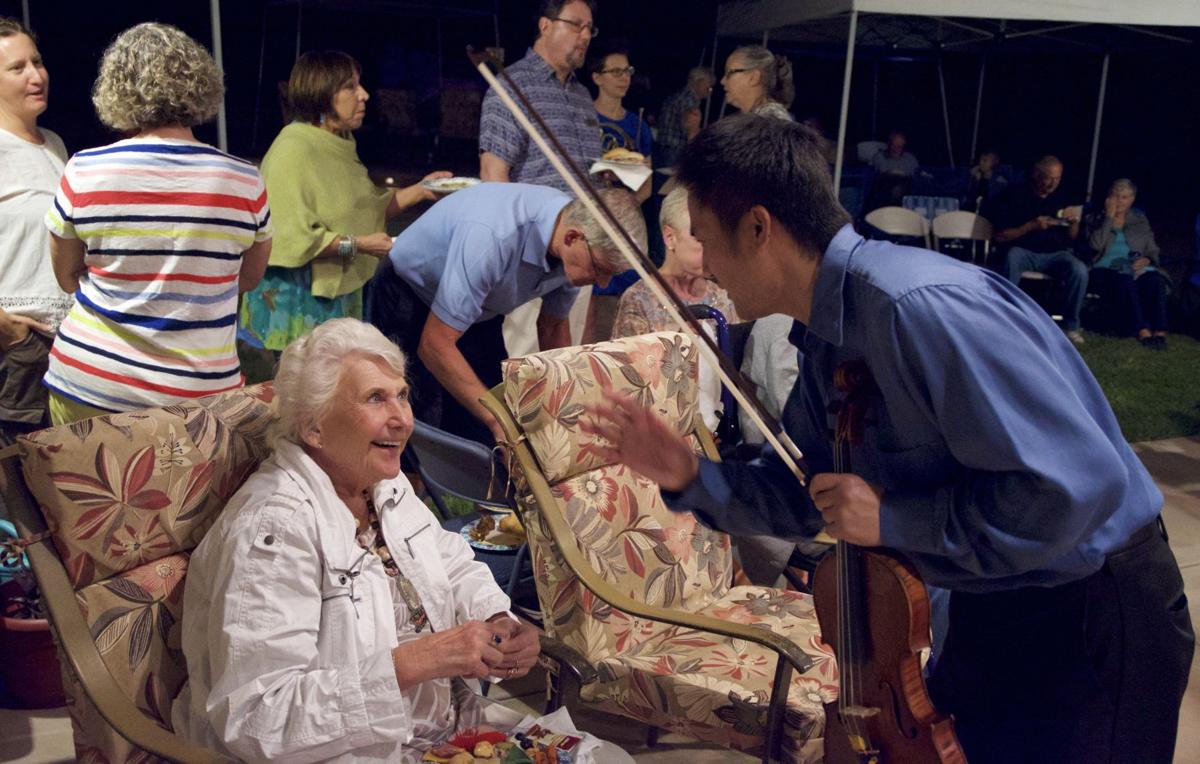 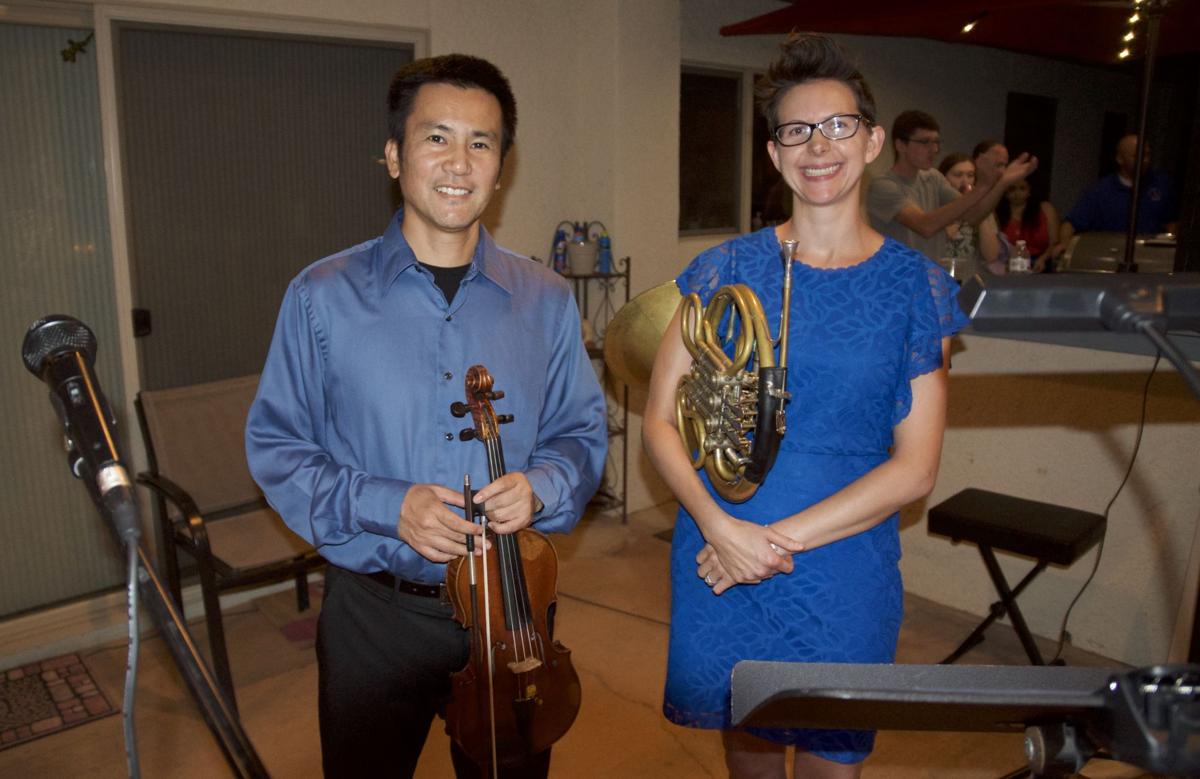 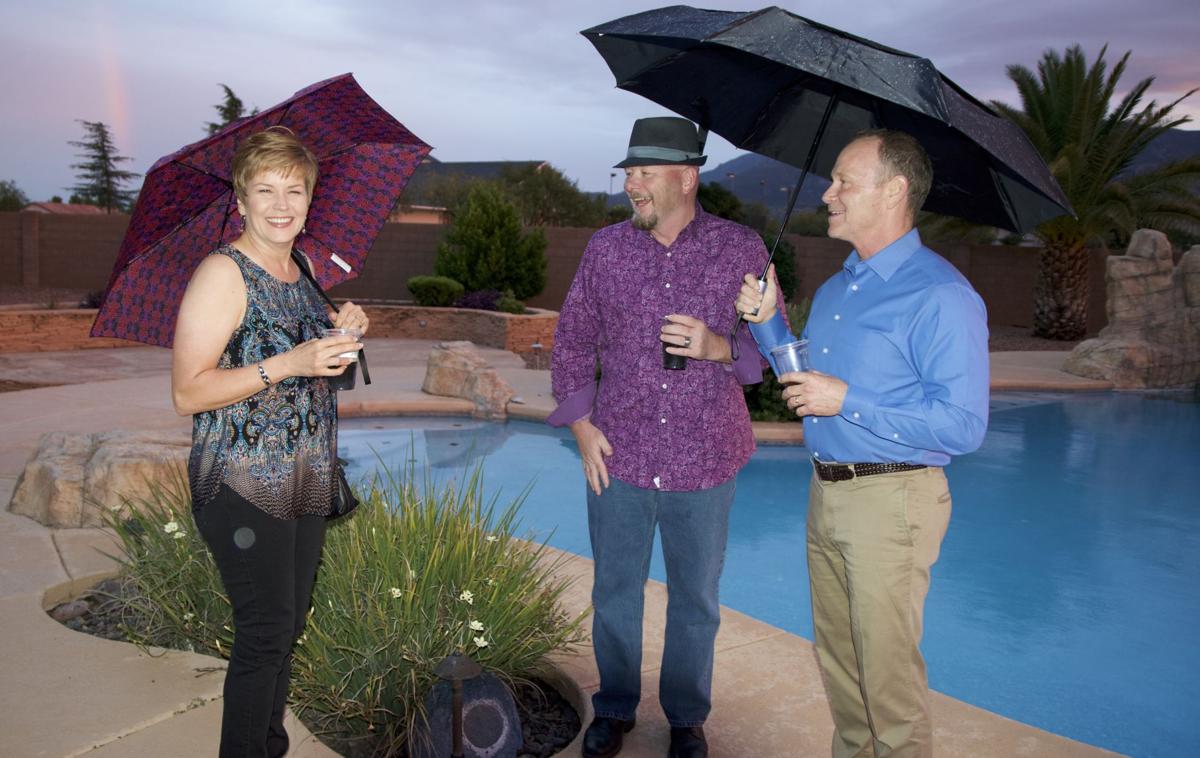 From left, Penny McIntosh, Chris Killingsworth and Kirk McIntosh enjoy a light moment prior to the start of Saturday's Music at Twilight, a Sierra Vista Symphony fundraiser at the home of Cal and Mary Downing.

From left, Penny McIntosh, Chris Killingsworth and Kirk McIntosh enjoy a light moment prior to the start of Saturday's Music at Twilight, a Sierra Vista Symphony fundraiser at the home of Cal and Mary Downing.

SIERRA VISTA — A light monsoon spritzer accompanied by a soft, pleasant breeze and an elegant backyard setting created an ideal combination on Saturday for an outdoor concert.

With the majestic Huachuca Mountains as a backdrop, Sierra Vista’s first-ever Music at Twilight was performed at the home of Cal and Mary Downey as a kickoff fundraiser for the 23rd season of the Sierra Vista Symphony Orchestra.

Together, the two created an evening of magical sounds in an intimate outdoor setting for an audience of about 70 people. Guests relaxed under canopies in the Downeys’ back yard while Tagawa and Lundy performed duets and solo selections through the evening.

“We’re happy to be here in this beautiful setting,” Lundy said at the start of the program. “Coming from Tucson, this cooler weather is awesome.”

Tagawa is starting his second season as Sierra Vista Symphony artistic director, while Lundy has served as the Tucson Symphony first horn since 2006. When introducing Lundy as the event’s special guest performer, Tagawa spoke of how she had soloed with the Sierra Vista Symphony Orchestra in a past performance and has performed with several other symphonies throughout the state.

Some of those appearances include the Phoenix Symphony, Arizona Opera, University of Arizona Guest Artist Series, the St. Andrews Bach Society and the Arizona Symphonic Winds, to name a few of the venues she has performed as a soloist and recitalist.

Saturday’s program included the following selections: Duo by Pablo Llamazares; Fantasy Pieces by Jay Vosk; Adagio and Fugue from Violin Sonata No.1 by Johann Sebastian Bach; Night Storm by Dan Coleman; Partita No.2 in D Minor by Bach and Duet in A Major by Wolfgang Amadeus Mozart.

Lundy gave a fun crash course on the intricacies of playing the French horn where she described how different sounds are created before performing Night Storm by Tucson composer Dan Coleman. After receiving a 2017 Artist Research and Development grant from the Arizona Commission of the Arts for a solo recording project, she will be performing three unaccompanied solo horn concerts that feature pieces by composers that range from JS Bach to contemporary Tucson composers Dan Coleman and Jay Vosk. Upcoming performances will be held at the Museum of Contemporary Arts in Tucson on Aug. 31, The screening Room in Tucson on Spet. 2 and the Grand Canyon Music Festival on Sept. 8 and 9. For information about Lundy and her concert schedule, go to tucsonhorn.com.

Just as Lundy introduced her French horn to guests, Tagawa talked about his violin.

“My violin was made in 1887 in Paris and it has been through a lot of musicians,” he said. “And now it’s here in Sierra Vista.” Tagawa compared his 130-year-old violin to the story of the violin in 1998 movie “Red Violin,” which featured the history of an antique violin as it made its way through different musicians and countries, finally landing in an auction house in modern-day Montreal.

Saturday’s grand finale piece was a piano concerto by Mozart, with one concert-goer describing it as “a delightful finale for a beautiful evening.”

All those interviewed gave the event rave reviews.

“I thought this was an awesome evening,” said Carol Dockter, as she and her husband, Bruce prepared to leave. “I truly hope they make this an annual event for the symphony.”

Symphony board member Waffa Issa Smith, said she loved the “beautiful, intimate setting” and wanted to thank the Downeys for opening their home to the community for the event.

“I loved the music, the setting and the people. It was a lovely event,” she said. “I think we need to do this every year.”

Two other symphony fundraisers include the annual Gala on Nov. 4 and Men Who Cook on March 24, 2018.

For information about the Sierra Vista Symphony, call 520-459-5189 or visit the website at sierravistasymphony.org.