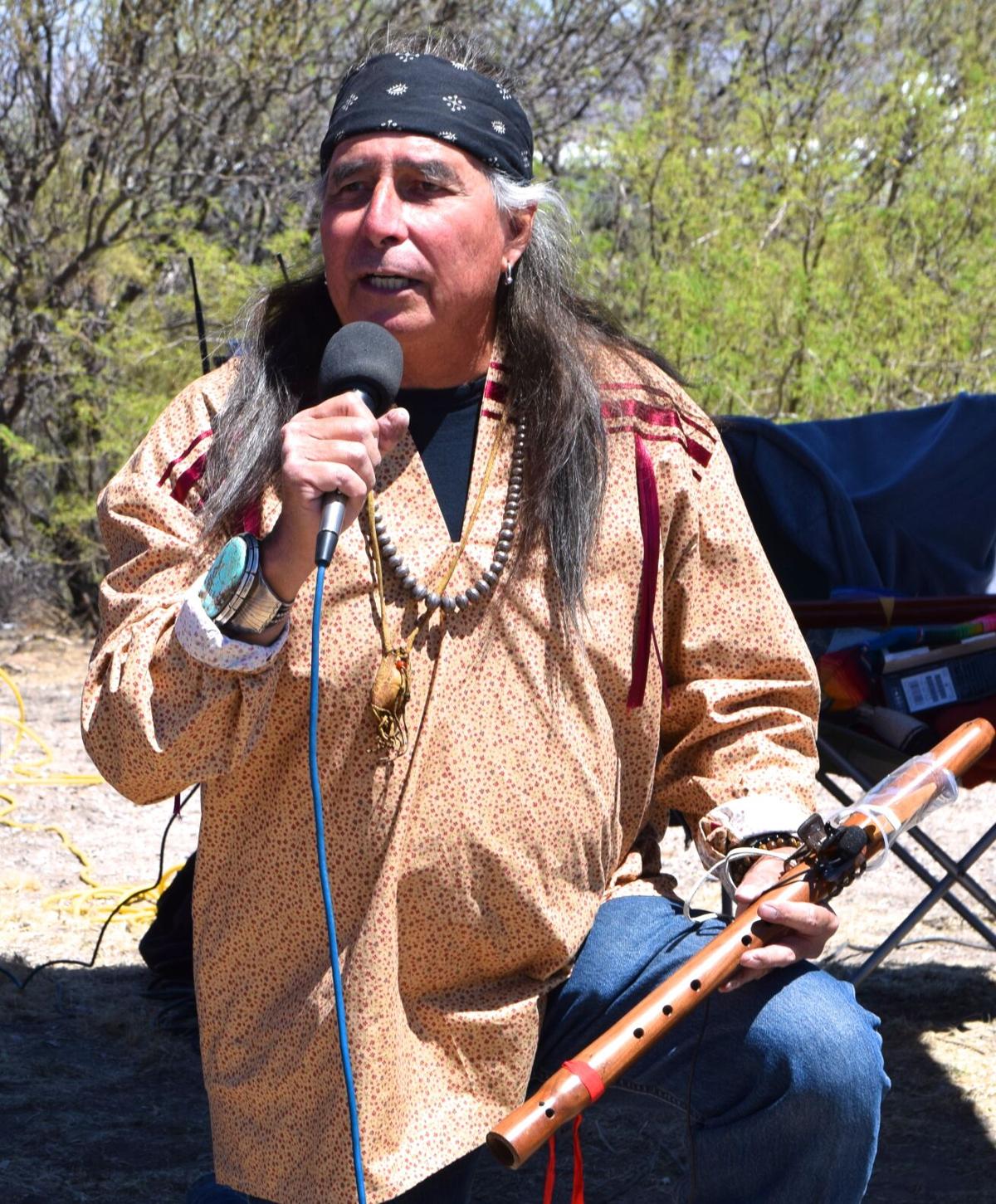 Mescalero Apache Danny Many Horses interweaves stories with flute music during his performances, where he shares the cultural and philosophical beliefs of Native American tribal people. 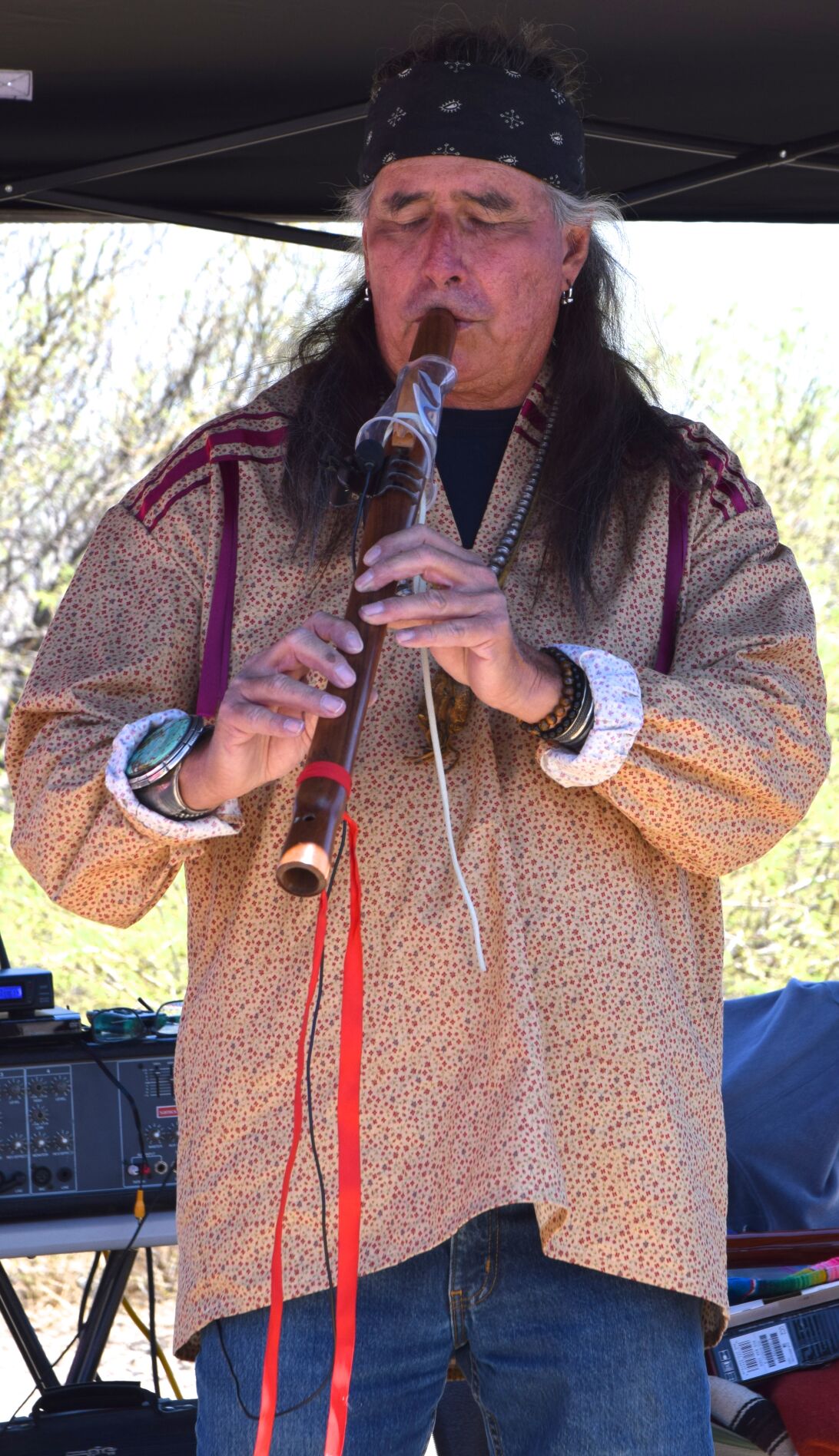 Danny Many Horses, a Mescalero Apache, performs Native American flute music at a recent craft fair in Benson. Many Horses, who travels internationally with his band and troupe of 14-Native American dancers, has performed in many countries including Italy, Australia, New Zealand, Japan and China. 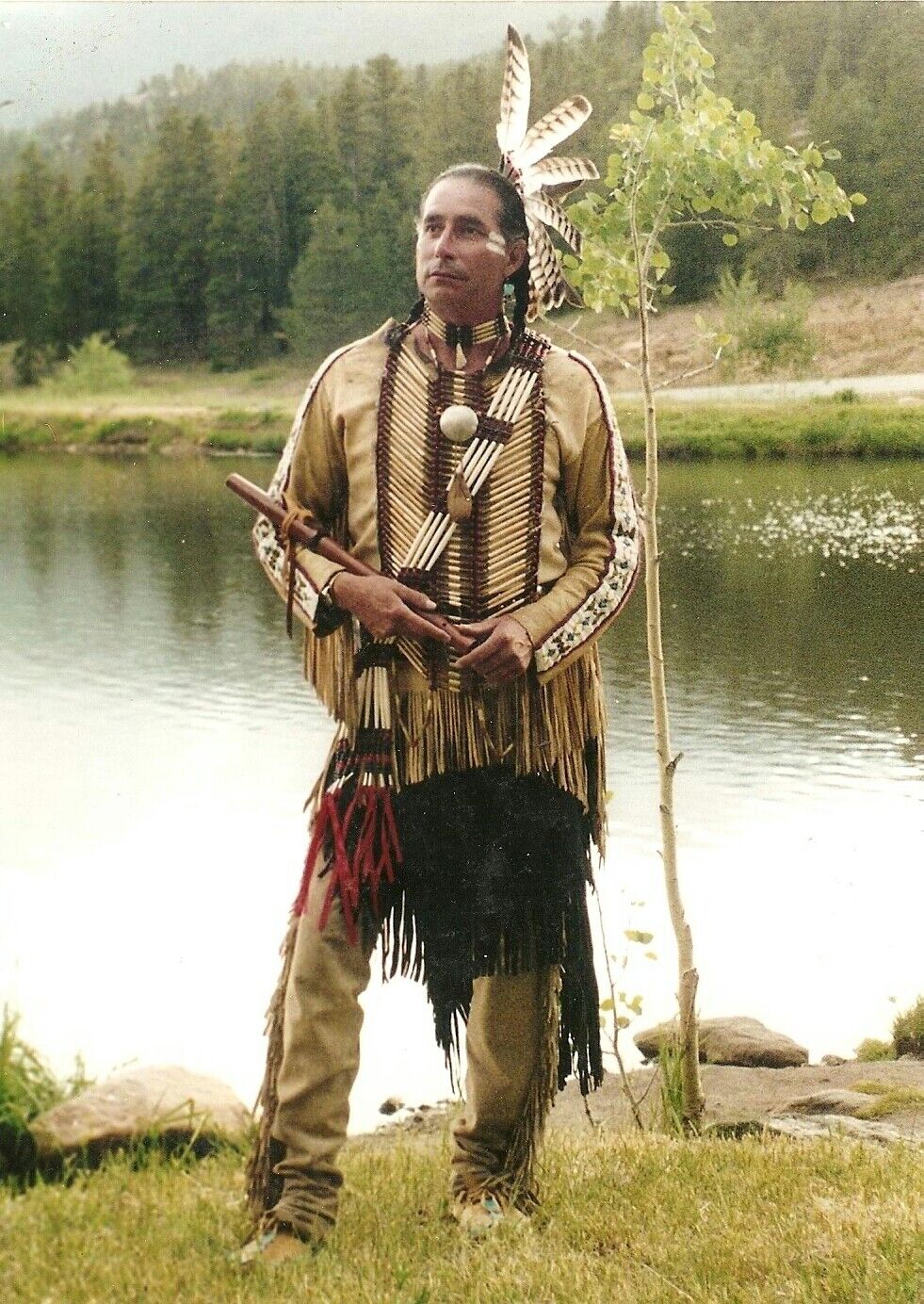 Danny Many Horses poses for a photo in his Native American regalia.

Mescalero Apache Danny Many Horses interweaves stories with flute music during his performances, where he shares the cultural and philosophical beliefs of Native American tribal people.

Danny Many Horses, a Mescalero Apache, performs Native American flute music at a recent craft fair in Benson. Many Horses, who travels internationally with his band and troupe of 14-Native American dancers, has performed in many countries including Italy, Australia, New Zealand, Japan and China.

Danny Many Horses poses for a photo in his Native American regalia.

BENSON — While walking through a canyon with his grandfather at a young age, Danny Many Horses learned of the special connection between humans and Mother Earth.

It’s a connection that has been passed down through generations of Native Americans and preserved through stories, music and dance.

Today, Many Horses is a nationally accomplished musician who shares his cultural roots by interweaving Native American music with stories that he shares with audiences in performances around the country and world.

“In the Native culture, a lot of our stories are oral histories, which I learned while growing up,” said Many Horses, a Mescalero Apache who was raised on a reservation in New Mexico and now lives in the Benson area. “We share our values and culture through those stories.”

As a talented story-teller and Native flute player, Many Horses has performed at a number venues, including the Heard Museum in Phoenix, which is dedicated to Native American art and culture.

“I have also performed for the Elk Fest at the Rocky Mountain National Park in Northern Colorado for 22 years, Cheyenne Frontier Days for 19 years and at Cody Wyoming for its rodeo days celebration for 15 years,” said Many Horses. “I’ve performed before the Bush family at the White House and twice for the Clintons.”

In 2005, Many Horses, along with his band and troupe of native dancers, were invited to perform for Pope John Paul II at St. Peter’s Square in Rome during the International Day of the Child.

“That was by the Pope’s request. I actually wrote a new song — ‘From the Heart of a Child’ — especially for that performance,” recalled Many Horses. “I have a six-member band and 14 native dancers who travel with me. We do two international concert tours a year. Along with Italy, we’ve been to Australia, New Zealand, Japan, Singapore, the UK, Scotland and Ireland.”

“It’s been an amazing experience because it allows us to share our music, culture and history with the rest of the world, which is something we’re passionate about,” said Many Horses, who has been traveling internationally for more than 20 years.

After high school, Many Horses attended UCLA on a scholarship where he earned a bachelor’s degree in political science. He also studied law enforcement for two years.

While living in Southern California he did public speaking engagements at different community colleges and universities, primarily with the cultural anthropology students.

“I actually worked at Knotts Berry Farm and Disneyland back in the mid-’70s as a traditional (Native American) storyteller and dancer. I started out doing traditional stories about our culture and philosophies, but saw that I was losing the audience,” recalled Many Horses, who decided to add light-hearted comedy to the stories to help hold audiences.

“I rolled a little humor into those stories so I could keep the audience entertained without losing the story’s value. It was important to me to do this without being disrespectful to my native culture.”

Although he’s known internationally as a native flute player, Many Horses actually started playing the saxophone in middle and high school bands.

“I’ve always enjoyed the ethnic sound of music, but my biggest influence was jazz,” he said. “Because of my background on the sax, I found it easy to transition into playing the flute. I’ve evolved into a fusion of jazz and traditional native flute music, which I call ‘Nazz,’ or ‘native jazz,’” he said.

When performing with his band, Many Horses starts his shows with the spiritual sounds of native flute music. Through his signature song, “Visions,” he carries a message of hope for all people.

“Part of what I share with the audience is a story of when my grandfather looked into my eyes one day and said to me, ‘If we are to continue to survive as a people...we can no longer live with hate in our hearts.’ Those words need to be reinforced.”

In the second part of his show, Many Horses brings out the jazz band with the “powwow” drum.

“It’s because our beginnings come from the heartbeat of Mother Earth, and the drumbeat resonates that sentiment,” he said.

Danny Many Horses and his wife, Najayyah, have lived in Benson for about seven years. They share their property with a plethora of rescued animals, including dogs, cats, chickens, ducks, horses and a donkey.

“We love living in Benson, and are community-oriented,” Danny said. “As soon as we arrived, Najayyah started volunteering with the Community Food Pantry of Benson, and is now the pantry president. One of our future plans is to organize a benefit concert for the food pantry with my band members. All proceeds will go to the pantry.”