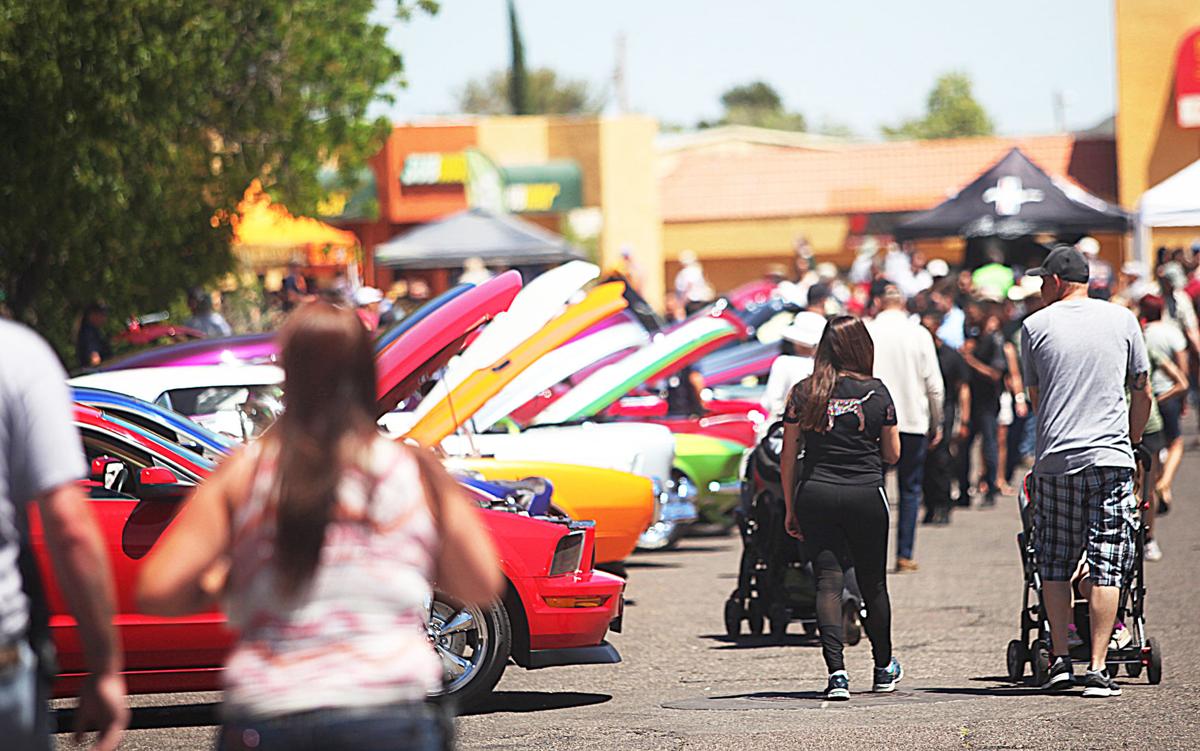 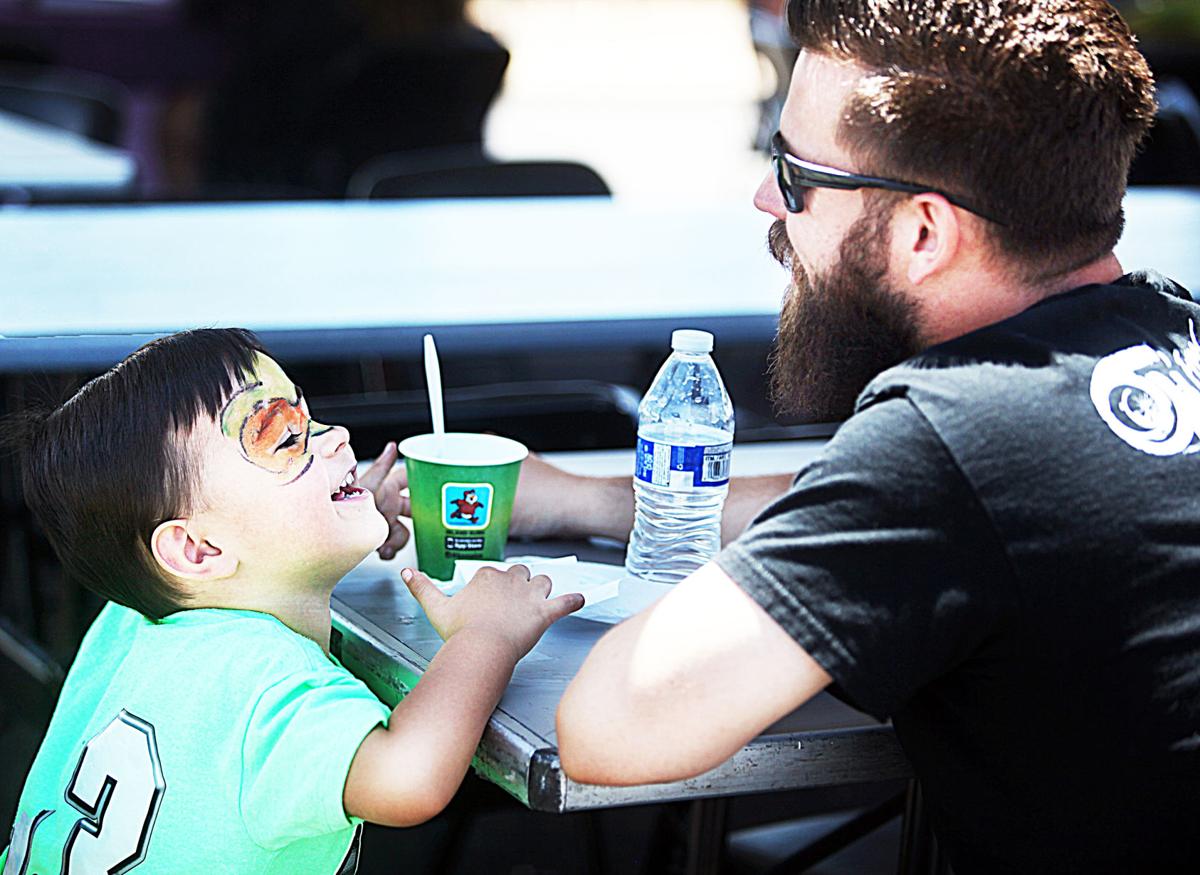 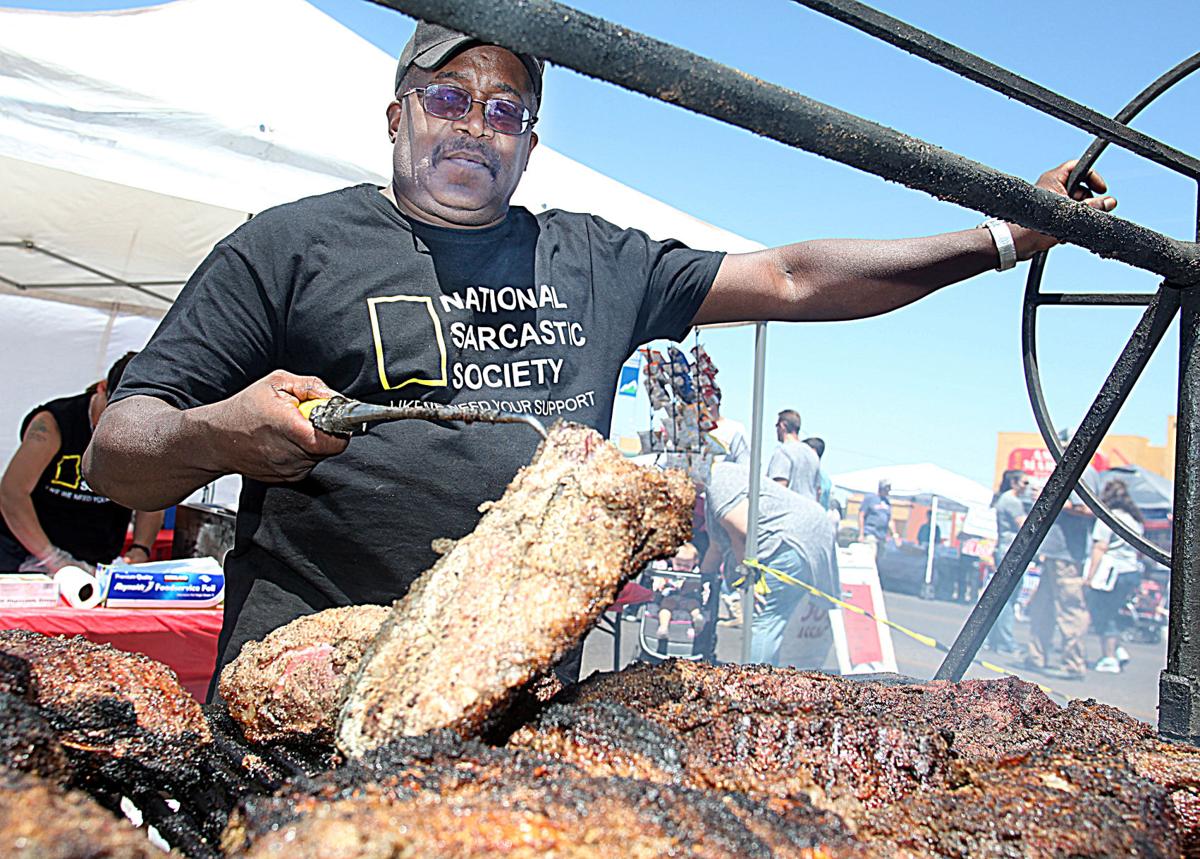 Nate “Tri Tip Man” Grant grills up his specialty during the fun on Fry Boulevard at the annual West End Fair. Grant traveled from Tucson to serve up his delectable food.

The Great Out of Line Dancers’ Tess Nelson warms up before she and the GOLD dance troupe performs in last year’s fair in Sierra Vista.

Nate “Tri Tip Man” Grant grills up his specialty during the fun on Fry Boulevard at the annual West End Fair. Grant traveled from Tucson to serve up his delectable food.

The Great Out of Line Dancers’ Tess Nelson warms up before she and the GOLD dance troupe performs in last year’s fair in Sierra Vista.

The heart of the city of Sierra Vista will be transformed into a walkable showcase of local vendors, entertainment, wares and food this Saturday once again for the West End Fair.

This year marks the 14th time that the city’s West End Commission has partnered with the community to highlight what makes the West End of town unique.

For the event, the city will close off Fry Boulevard from North Garden Avenue to North Avenue to traffic so guests can walk freely between vendor booths and performances.

West End Commission chair Rosie Mackey has been a part of the fair since its inception and said that, though the fair has grown a lot over the years, its mission has remained the same.

“Fourteen years ago, the neighborhood got together and said, ‘Let’s have a block party, let’s celebrate us,’ “ Mackey said. “It started from a need to be together, be a community and it’s just grown.

“The main purpose for it was to draw attention to West End businesses and it still is.”

To encourage West End businesses to participate and showcase what they do, they are offered booth space for free. Though many of the vendors are from the West End, there are also plenty of local nonprofits and vendors from across the county, even some from Tucson and New Mexico.

Mackey said by now she has a good sense of what vendors are looking for and many of them have participated in past West End Fairs.

“I think they (guests) should take a little time at every vendor to see what’s available in this area,” Mackey said. “Talk to the people; they aren’t all just trying to sell you something and a lot of them are people people. Say hello to everybody.”

This year there will be over 70 vendors set up along Fry Boulevard for visitors to explore.

Councilwoman Carolyn Umphrey serves as the council liaison to the West End Commission and said she is happy to see the large turnout of vendors this year.

“It’s exciting to see we have more people participating, a lot of vendors,” she said. “It’s just fun having it closed down on part of Fry, walking around with all the vendors lined up together.

“Last year, we actually had the booths spaced out a little more, so this year we are bringing everyone closer together for more of a market feel.”

Along with spotlighting their businesses, a number of vendors this year will be wearing their science fiction love on their sleeves.

Each year, a theme is chosen for the fair and as the event coincides with “May the Fourth be With You,” a national day chosen to celebrate the “Star Wars” franchise, guests and vendors alike are encouraged to wear something within the theme.

“We are encouraging everyone to embrace the theme,” Umphrey said. “It’s something fun to do and this is such a popular thing in science fiction everyone can recognize it and have fun with it.”

In keeping with the theme, the 501st Legion, a nonprofit dedicated to bringing together costume enthusiasts and promoting interest in the “Star Wars” films, will be in costume at the event walking around and interacting with guests.

There will be also be dance performances and live music by local band Simply Stellar.

Mackey said that the behind the scenes work it takes to put this event on each year starts immediately after the fair.

The free event is made possible through the hard work of volunteers, the West End Commission and numerous sponsors.

Mackey enjoys watching the West End Fair continue to grow and just wants the community to come experience it for themselves.

“We’ve got a lot of vendors this year of all different forms and all different walks of life,” she said. “It’s just a fun day, a lot of work coming up to it.”

For Umphrey, who has attended the West End Fair in the past before she was elected to city council, this fair in particular is particularly special, considering it may be the last one before the city’s redevelopment of the area.

“I think how cool will it be when the area is revitalized and we have this beautiful walking space,” she said. “It’s just going to get better and better.

“I’ve never been to a West End Fair without seeing something new. It’s going to be a good time. Even if you have been here before, you will see something new, especially new people.”

Theme: May the fourth be with you, dress in your favorite Star Wars gear since this year's fair coincides with the day commemorating the Star Wars franchise.

Cost: Free, but bring along some spending cash.

It is preferred that dogs be left at home for this event, excluding service animals.