SIERRA VISTA — Anyone who feels they have come in contact with someone with COVID-19 can now be tested for the virus, but that may be easier said than done in Cochise County.

The Arizona Health Department announced last week they are loosening the restrictions on who can be tested for coronavirus. The standing order, which went into effect on April 22, states that any “individual who is concerned that he or she had been exposed to and infected with COVID-19 AND individual who had signed a consent and voluntary isolation agreement (or parent/guardian, if patient cannot legally consent).”

The orders removes the requirement of a medical supervised test center to administer the COVID-19 swab.

Governor Doug Ducey announced on Monday that he is enacting a testing blitz for the first three Saturdays in May to test as many Arizonans as possible.

But Carrie Langley, director of Cochise Health and Services, said the new standing order and blitz centers are for drive-thru and walk-in test centers. She said a bliz location would not be set up by the county, since they don’t have the resources and supplies to do the mass testing.

“It’s not really a reality for our local entities,” Langley said. “We have been told testing kits are going to be more widely distributed, but we haven’t seen that.”

The closest location participating in Ducy’s testing blitz are in Tucson. However, Langley doesn’t recommend those who feel sick enough to be tested to drive all the way to Tucson, but rather call their primary care provider because they should have access to tests and if they don’t they can point you in the right direction.

Valerie Weller, marketing and communication coordinator for Canyon Vista Medical Center, said the hospital cannot test anyone without permission from a provider, so contacting a primary care physician is the first step. However, she noted that if it’s truly an emergency to come to the ER and one of the hospital physicians will administer a test to determine what treatment is needed.

“We can’t provide tests without a doctor’s order,” Weller said. “Call your provider and they will determine if you need to go to the emergency room.”

Beth Robinson, office manager for High Desert Clinic located at 77 E. Fry Blvd. in Sierra Vista, said they have seen in an increase in testing over the last couple of days since the new standing order was put into place.

Robinson added that on Monday they clinic received 10 more tests than they have in the past which she thinks is an indication of their supplier loosening up on the limitations of tests they are sending to medical institutions. As of Tuesday morning, High Desert Clinic has the capacity to test between 35 and 40 people, with tests arriving daily, she said.

If someone wants to be tested at the clinic, they should call to set up a telemedicine appointment, or call when they arrive at the clinic so the staff knows and can administer the test in their vehicle. Robinson said all walk-ins to the clinic are having their temperature taken at the door, in precaution for their safety and the patients.

While local medical facilities are bracing for an increase in testing, others are still adhering to the old guidelines. Emily Vickers, Public Relations Specialist for Chiricahua Community Health, said in an email statement that they are still following the guidelines from before until they receive further instruction from the state health department.

“Although the state has expanded the testing criteria to be only two things now: you think you’ve been exposed and you sign a 14 day self-quarantine agreement, the new criteria only applies to places that are doing mass testing with drive-thru locations,” Vickers’ statement said. “While the county is working on setting up these facilities as soon as supplies and infrastructure are in place, since we don’t have mass drive-thru testing currently in Cochise County, we are still going by the criteria that has been in place from the start. (Symptoms, been exposed, etc.)”

When asked how much it would cost someone to be tested, Vickers said there isn’t a straightforward answer because insurance companies and the government is involved. She said via email that all insured patients pay nothing for the test, and those who are uninsured and meet testing criteria, and has their test sent to a state lab, not a private lab — then the test is covered.

Langley said a large part in why the new standing order is important is because it allows private labs, like Sonora Quest and LabCorps, to complete the tests without state priority. Members of the public cannot go to a LabCorps or Sonora Quest to be tested for COVID-19. The tests these companies complete are collected from various sites, like doctors offices.

The most important advice Langley had for residents of the county is if they feel sick enough to be tested then they should act as if it’s a positive test.

“If you’re sick and can stay home, do so,” she said. “We feel like there not enough testing (here) and statewide.” 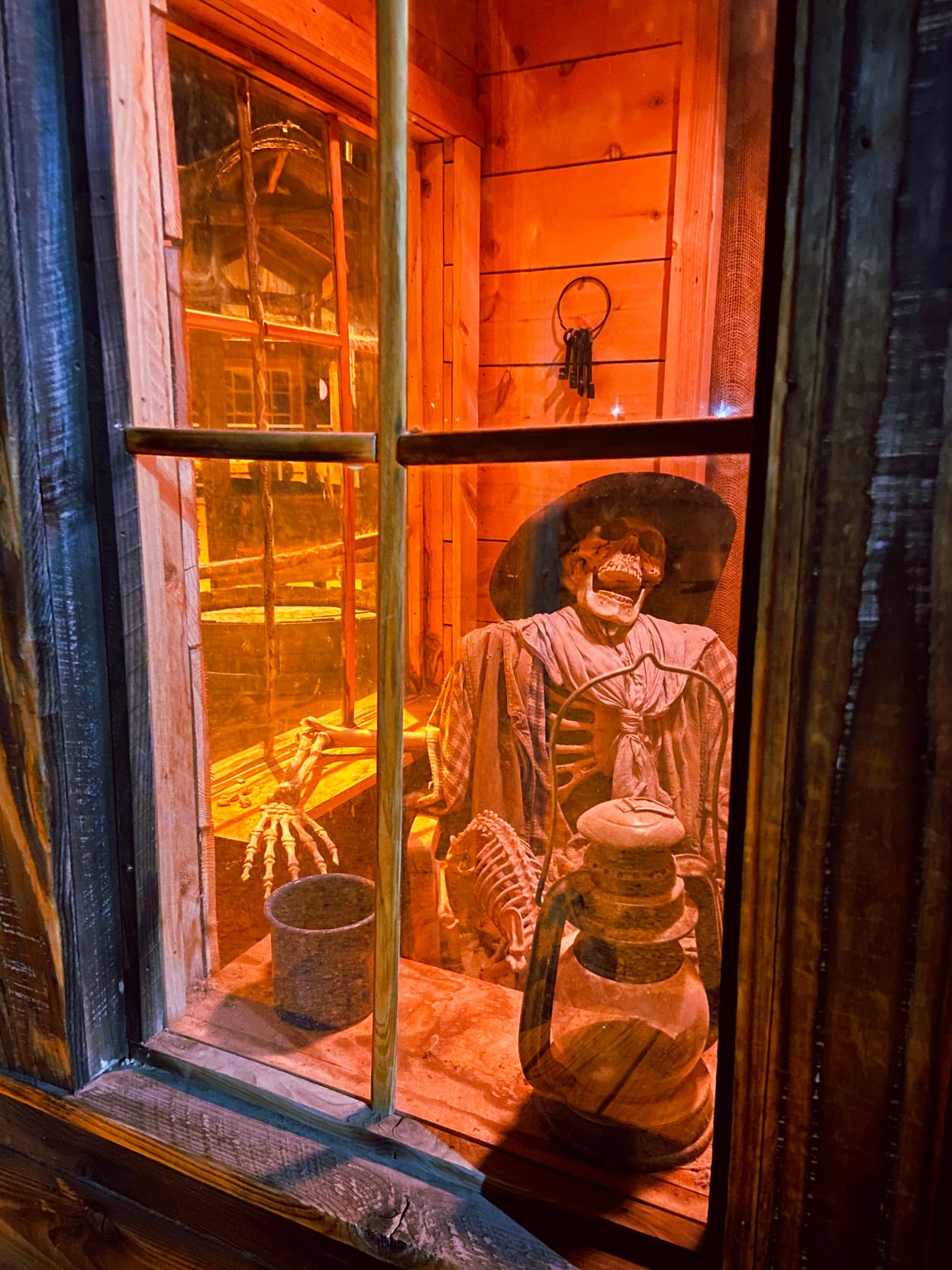 My angst lingered until I stepped out onto North Fourth Street. Then, I welcomed myself back to the “Town Too Tough to Die” with a deep draw of breath. Tombstone’s silent blocks jolted me steady.

PHOENIX — Gov. Doug Ducey on Monday announced a “blitz” to test up to 60,000 Arizonans in the next three weekends to better determine how many Arizonans are infected with COVID-19.

The goal is to test from 10,000 to 20,000 people each Saturday, beginning this weekend, through various drive-thru and on-site testing locations.

For the moment, those are limited to Banner Health facilities in Tucson, Phoenix, Peoria, Gilbert and Mesa, along with a Walgreens in the 10300 block of East Broadway and one on Dysart Road in El Mirage. State health officials are reaching out to others interested in participating to contact them.

No sites in Cochise County were announced Monday.

The move comes as Ducey has to decide this week whether his executive orders limiting individual and business activity due to the pandemic are worth the continued harm to the Arizona economy.

That harm has taken the form of another 52,350 this past week applying for first-time unemployment benefits. That now puts the number of Arizonans who have lost their jobs as a result of the virus and the governor’s orders in excess of 470,000.

There are signs, however, that the fever may be breaking: The Department of Health Services said there were no new deaths reported Monday, the first time that has happened in more than a month.

But it still leaves questions about how extensive is the virus in Arizona and whether, without comprehensive data, it is premature to reopen segments of the state economy.

The health department reported Monday another 1,732 people had been tested. That brings the overall tally in the state to 66,543.

That is just 0.9 percent of the total population. Kaiser Family Foundation finds only Virginia with a per capita testing rate as low.

There have been some moves to improve that, even before Monday’s “blitz” announcement, including an order from state Health Director Cara Christ last week allowing those who believe they have been exposed to COVID-19 to get tested.

“Arizona has placed an emphasis on ramping up testing, but we need more,” the governor said in a prepared statement. He said that expanded testing will “provide us with better data to develop Arizona specific solutions and re-energize our economy.”

But gubernatorial press aide Patrick Ptak said Ducey’s decision will be based on more than just test results.

“Other data is also important, like whether our hospitals are prepared,” he said. And Arizona got some good news, with the health department saying Monday was the first day in more than a month that no COVID-19 deaths were reported.

All that comes at the governor has to act on his month-old stay-at-home order telling people they cannot go out unless they are engaged in an essential activity. That edict self-destructs at midnight Thursday night unless renewed.

Given Ducey’s cautious approach to enacting the order in the first place — at least two dozen other governors had acted before Arizona’s March 31 implementation — it is unlikely he would allow it to simply expire. Instead Ducey has indicated the expectation is for a gradual loosening, perhaps tied to some advisories about social distancing.

And it won’t matter much, at least to the Arizona economy, unless Ducey also alters his list of what are “essential” business and services — and the more important list of what are not and must remain shuttered. There is no deadline for Ducey to act as that order on essential businesses remains in effect until he alters or rescinds it.

The governor’s orders already permit people to go out to shop at essential businesses. So easing his order to let people go out won’t mean anything if there’s no new places for them to go, whether to shop, dine, drink or even have a picnic in the park.

But here, too, the governor was slow and deliberate about deciding what can remain open, even to the point of initially concluding that barber shops, hair salons, spas and tattoo parlors were essential until he finally acknowledged that there was no reasonable way to maintain social distance.

A similar loosening is likely to be in a stepped approach, providing additional opportunities for people to shop — with some controls.

That’s exactly the course being urged by Glenn Hamer, chief executive of the Arizona Chamber of Commerce and Industry and a close political ally.

“As we thaw out parts of the economy that have been frozen, we need to do that safely,” he said.

But all that is too slow for some Arizonans who want Ducey to immediately scrap both his stay-at-home and essential services orders.

Sen. David Farnsworth, R-Mesa, said he does not dispute that the orders — fewer infections and “flattening the curve” to preserve hospital beds — appear to have worked.

“The question is, to what extent?” he told Capitol Media Services after a rally last week.

“How long do we wait to get our economy back?” Farnsworth continued. “I think the majority of the people down here feel like the time has come, that the main point of danger has passed, that it’s time to reopen.”

Hamer said the bottom line — and the message he wants the governor to have — is that businesses want to reopen.

“Arizonans want to work,” he said.

Still, he said, it has to be done in a prudent and safe fashion.

“And it’s going to be done in phases,” Hamer said.

He said there are models out that that work.

“Protocols are going to have to be in place that limit traffic,” Hamer said.

That’s already being done in many grocery, home improvement and department stores, with a new customer being let in when one leaves. And he said that’s even more important as the rules for who can open are broadened.

“We can’t have a gazillion people in a small store when you have a pandemic without effective therapeutics and good treatment,” Hamer said. And he said there are likely to be other mandates and suggestions, ranging from sheets of plastic separating customers from cashiers to tape lines on the floor marking social distance for those waiting in line.

All this presumes that even if Ducey loosens the restrictions that Arizonans will be willing to foray out.

“Consumer confidence is the $64,000 question,” Hamer conceded. “It’s very important for the governor’s actions to continue to be consistent with the comfort level of the citizens.”