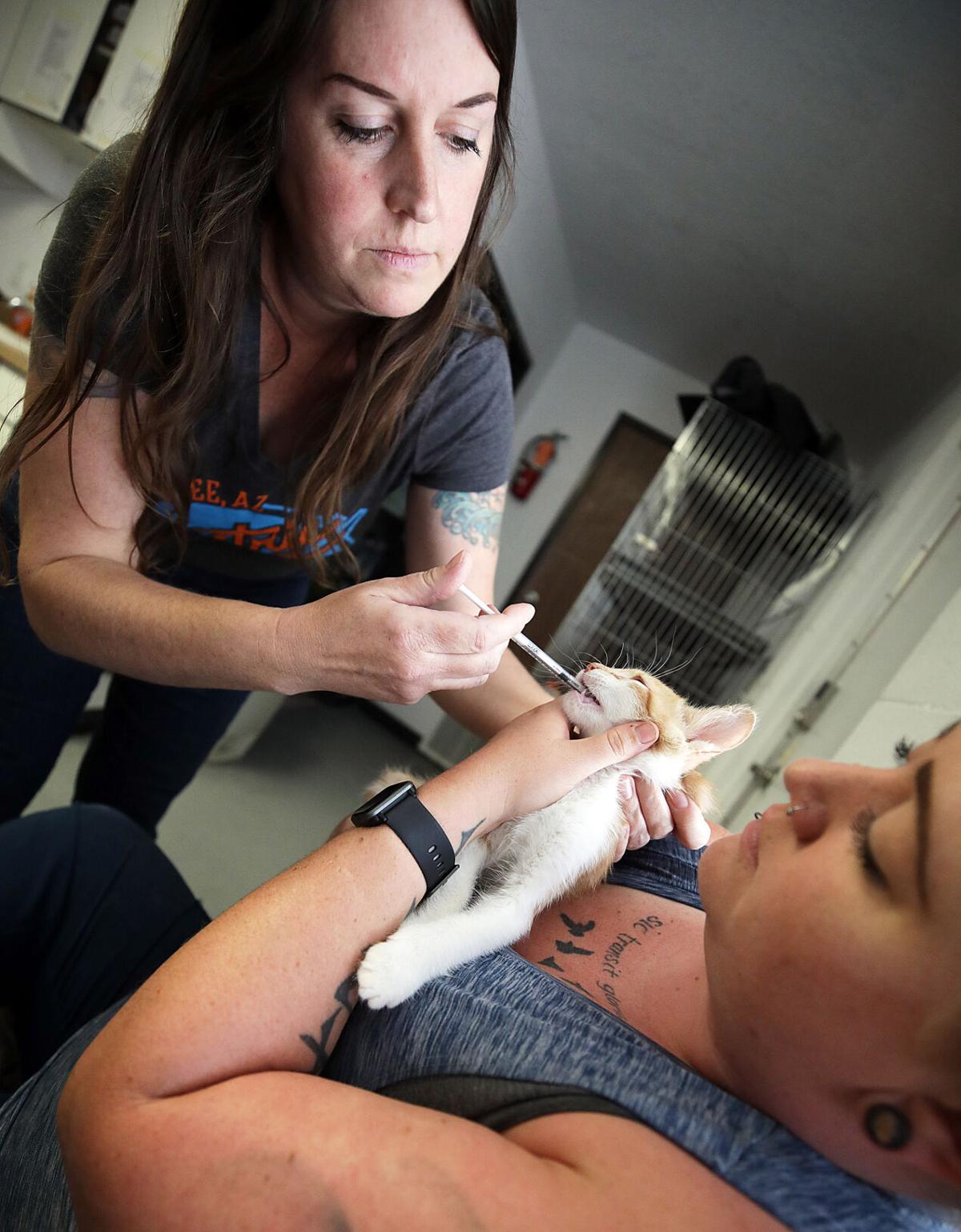 The Bisbee Animal Shelter has an overabundance of cats and is hoping to find homes for them. Shelter Manager Rachel Dennis administers medicine to a kitten last week with the assistance of staff member Jamie Schaffer. 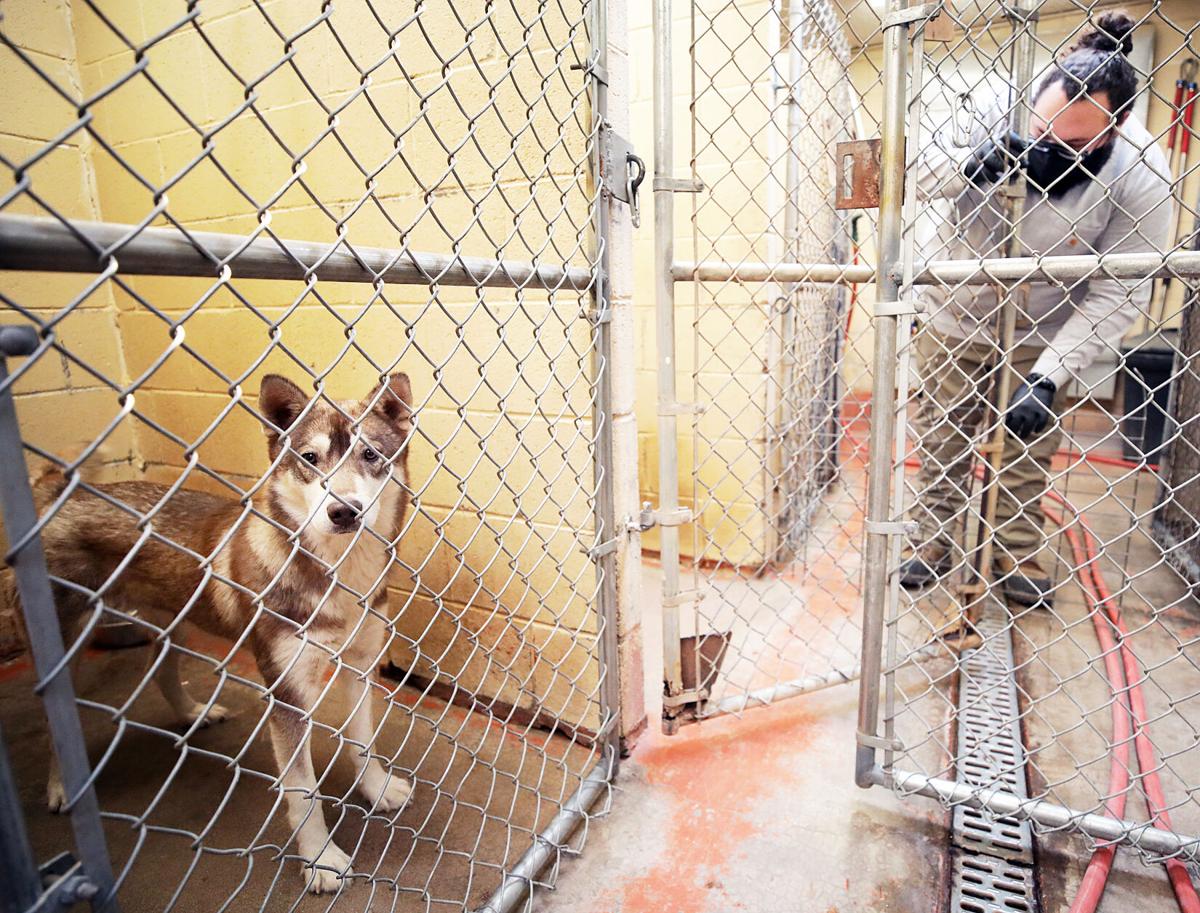 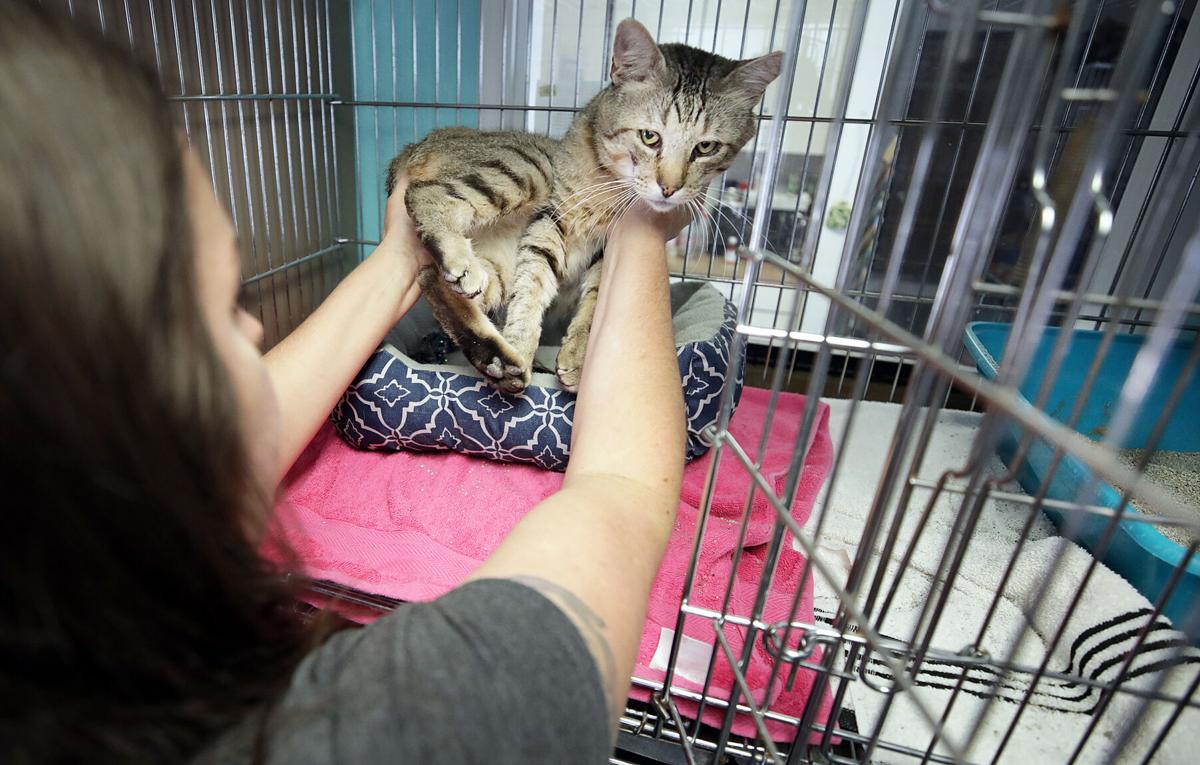 Rachel Dennis has to move Bruce so she can clean his litter box. Bruce was living on the streets of Bisbee and was bitten by a snake. He is recovering nicely at the shelter. 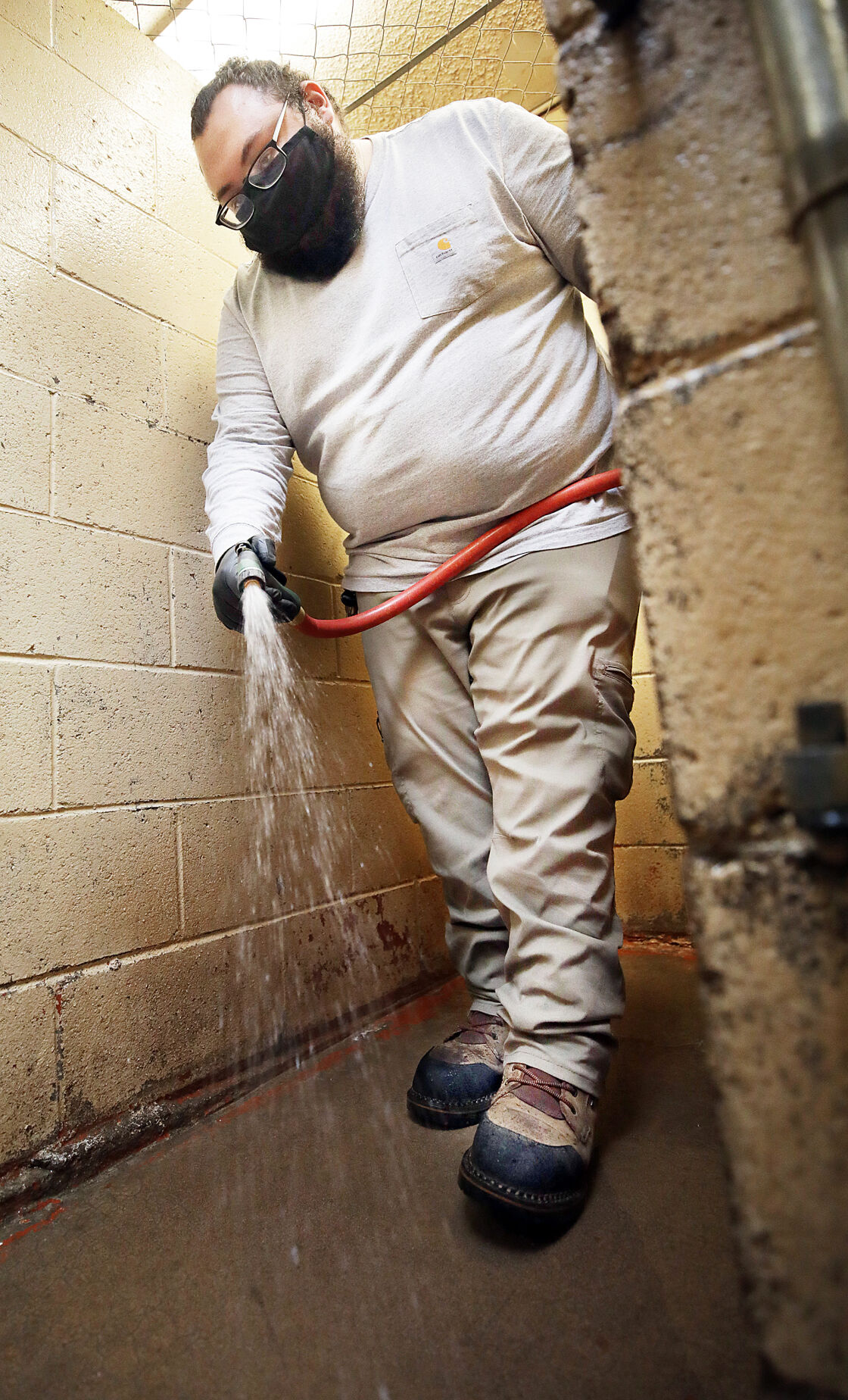 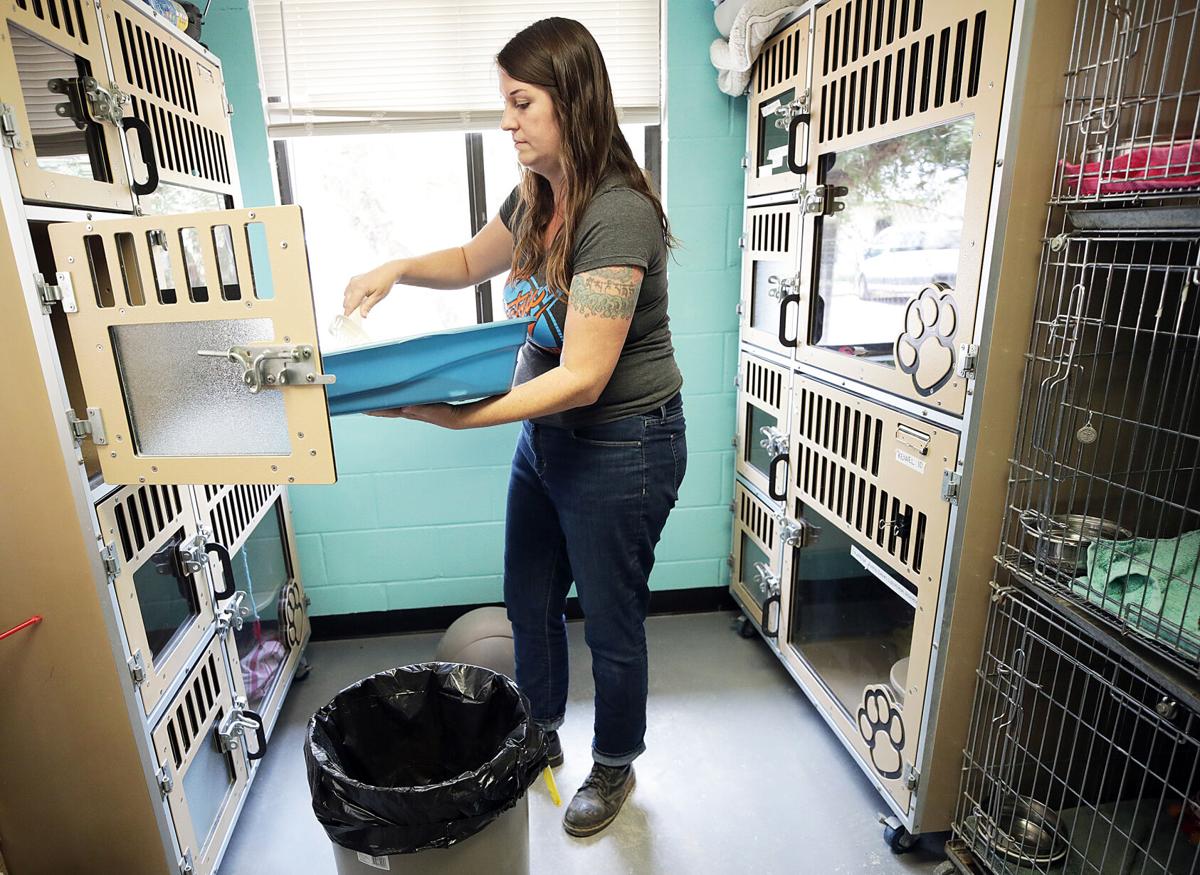 Bisbee Animal Shelter Manager Rachel Dennis sas the facility has more than two dozen cats with others being fostered in homes. 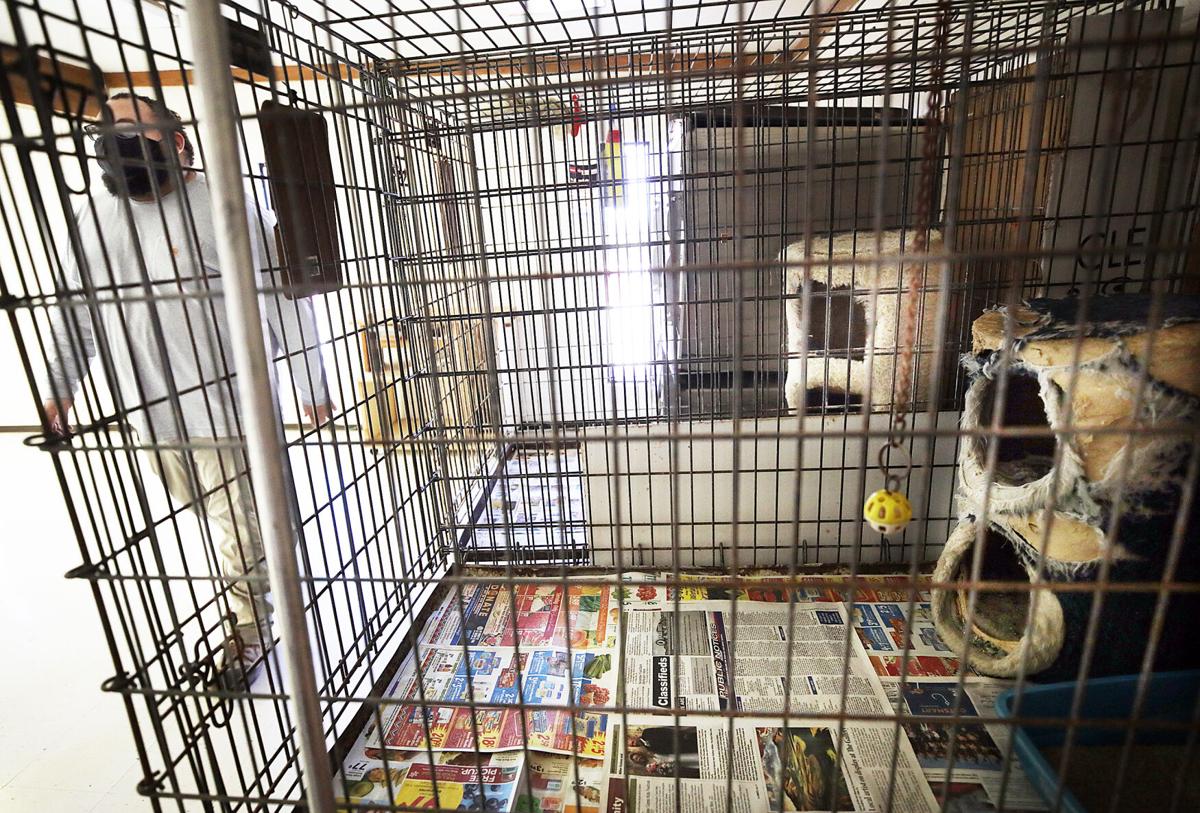 The Douglas Animal Shelter currently has no cats at the facility.

The Bisbee Animal Shelter has an overabundance of cats and is hoping to find homes for them. Shelter Manager Rachel Dennis administers medicine to a kitten last week with the assistance of staff member Jamie Schaffer.

Rachel Dennis has to move Bruce so she can clean his litter box. Bruce was living on the streets of Bisbee and was bitten by a snake. He is recovering nicely at the shelter.

Bisbee Animal Shelter Manager Rachel Dennis sas the facility has more than two dozen cats with others being fostered in homes.

The Douglas Animal Shelter currently has no cats at the facility.

In Cochise County, many animal shelters are experiencing a heavy kitten season and an overall increase in animals, leading to unhealthy animal populations and more animals being euthanized.

It is hard to tell what causes more animals to show up, other than increased breeding, but feral cats and unfixed pets contribute to the issue. Some shelters also wonder if people surrendering animals have less time for them after returning to work post-pandemic or traveling for the summer.

“It happens every summer — last year being the exception. It’s just that time of the year … in the summer months we get an influx of turn-ins,” Garcia said.

Those turn-ins range from people finding stray dogs and cats to new kittens and puppies, and often to owner surrenders as well. Garcia said the summer numbers increase may be because people are going back to work or traveling, and caring for a pet is harder.

Last year the shelter did not receive many new animals, which Garcia said was likely due to COVID-19. This year, however, they have 120 animals in their care, including those in foster care. Their facilities are full, and they have put out a public announcement with the city asking people to pause turning animals in for now.

This year’s numbers are unusual for the Douglas shelter according to David Rose, Douglas Police operations commander and supervisor for Animal Control.

During all of last year, the shelter took in 30 cats. From January to May of this year, they have taken in 220 cats, Rose said in an email. There has also been an increase in dogs, with 186 last year and 221 this year.

The Douglas animal shelter receives animals from the county sheriff’s animal control officers as well as animals in the Douglas area. This year, Rose said, they are getting animals across all ages. Rose mentioned a problem with more feral cats recently.

“We’re not very big, but you know, we just try to provide the service that we can for the community with what we have,” Rose said.

Bisbee’s shelter is facing a heavy kitten season this year. The shelter currently has 64 animals in their care; six are dogs and the rest are cats, with a vast majority of kittens, according to shelter Manager Rachel Dennis. Some kittens are too young to be in shelters, and the space is filling up, so 24 of their animals are in foster care.

“Mind you, we’re a really small shelter, so … it may not sound like a lot, but for us it really is because we have a very small space,” Dennis said.

The reasons animals wind up at the shelter vary, Dennis said. She said she has seen more animals being given away online, and the shelter recently had a return from an owner that adopted last year during the pandemic. Dennis said that abandonment seems to be less of an issue at the Bisbee shelter as it is in other areas.

More commonly, Dennis said, people find stray animals and bring them in, or their pet has kittens or puppies and can’t care for all of them.

“In that case, we always try to pass on spay-neuter resources … we try to get to the root of the problem and get the adult cat taken care of,” Dennis said.

Border Animal Rescue, a nonprofit in the county, also works to promote spaying and neutering pets. BAR President David Kelso said that Trap, Neuter, Release programs are part of the organization’s mission, along with connecting animals without a home to foster families until they are adopted.

“We are experiencing an overabundance of kittens this year,” Kelso said. “People are finding litters of kittens, four or five weeks old, friendly with people … which means somebody’s pet had kittens, they were sufficiently officially weaned and they just took them out and left them somewhere hoping somebody’s gonna adopt them or take them. That’s happened more than I’d say normal this go around.”

Last fall, Kelso said the organization only saw one instance of abandoned kittens, but this kitten season they have seen about 10.

Kelso said that more people could be giving up their animals because they adopted last year while they had more time at home and are now returning to work. However, he said there’s no real way to tell why someone left an animal.

“There is no usual,” Tonyia Hallen, president of the Tombstone Small Animal Shelter, said of animal intake.

According to Hallen, the Tombstone shelter has not been hit as hard by kitten season as others in the county, as they are one of the smallest ones. Nevertheless, they are doing their best as they always do. Hallen said some years they just get more kittens than others depending on the populations in the county.

Over at the Benson Animal Shelter, Animal Control Supervisor Nancy Harris said they have more kittens than usual, but are not filling up to a concerning point. Harris also emphasized the importance of spaying and neutering animals, as well as the difficulties that come from cats not being as regulated as pets in Arizona as dogs are.

All the representatives said when shelters in Cochise County get overwhelmed, they reach out to others to see who has extra space.

Rose said that in Douglas, their first move is always to contact other shelters to see if they have room for extra animals, but being a small shelter and one the county gives animals to, they do have to euthanize some animals.

One-hundred-thirty-nine cats have been euthanized at the shelter from January to May, compared to 17 cats all of last year, Rose said in an email. The number of dogs euthanized also increased, he said, from 54 to 82.

Sierra Vista’s Garcia said they have not euthanized for at least five years, and they are doing everything they can to keep it that way.

Smaller no-kill shelters manage capacity issues by reaching out for more fosters, or physically making more room in their shelters, as Dennis said Bisbee has done before with break-down crates. At times, the Humane Society of Southern Arizona has been able to take in animals from Cochise County.

‘The root of the problem’

An abundance of kittens comes from more breeding, and Kelso said that the problem is feral cats and pets combined. When someone doesn’t spay an animal and allows it outside, Kelso said they often have babies that the family cannot handle. For cats, add that to the large populations of feral cats breeding in the county and some shelters become overwhelmed.

For 41 years, the Cochise County Humane Society has been working with communities and shelters to spay and neuter more animals in the county. The current six-person team helps owners pay for spaying and neutering, organizes spay-neuter clinics and participates in trap, neuter and return efforts, according to CCHS President Yvonne Mayer.

Mayer said she cares deeply about the work because feral and abandoned cats are often very unhealthy. They get hit by cars, are attacked by predators, catch diseases, inbreed to the point of defects and are even purposefully harmed by humans.

“They only have about a 50% survival rate,” Mayer said.

Feral cats tend to live in colonies that can grow very quickly in size, and both Dennis and Kelso commented that people may not realize just how fast and how early cats can breed.

“Cats are prolific breeders. They can get pregnant as early as 4 months old,” Dennis said.

Mayer said that overall, spaying and neutering is far healthier for a cat. The female cats will not get reproductive diseases and cancers or have their kittens taken away from them as often happens.

“I feel we have a responsibility to be kind to animals, not make their life more difficult,” Mayer said. “And as far as feral cat colonies, you know, if they are spayed and neutered, the colonies will remain stable. And that’s beneficial.”

Resources and ways to help