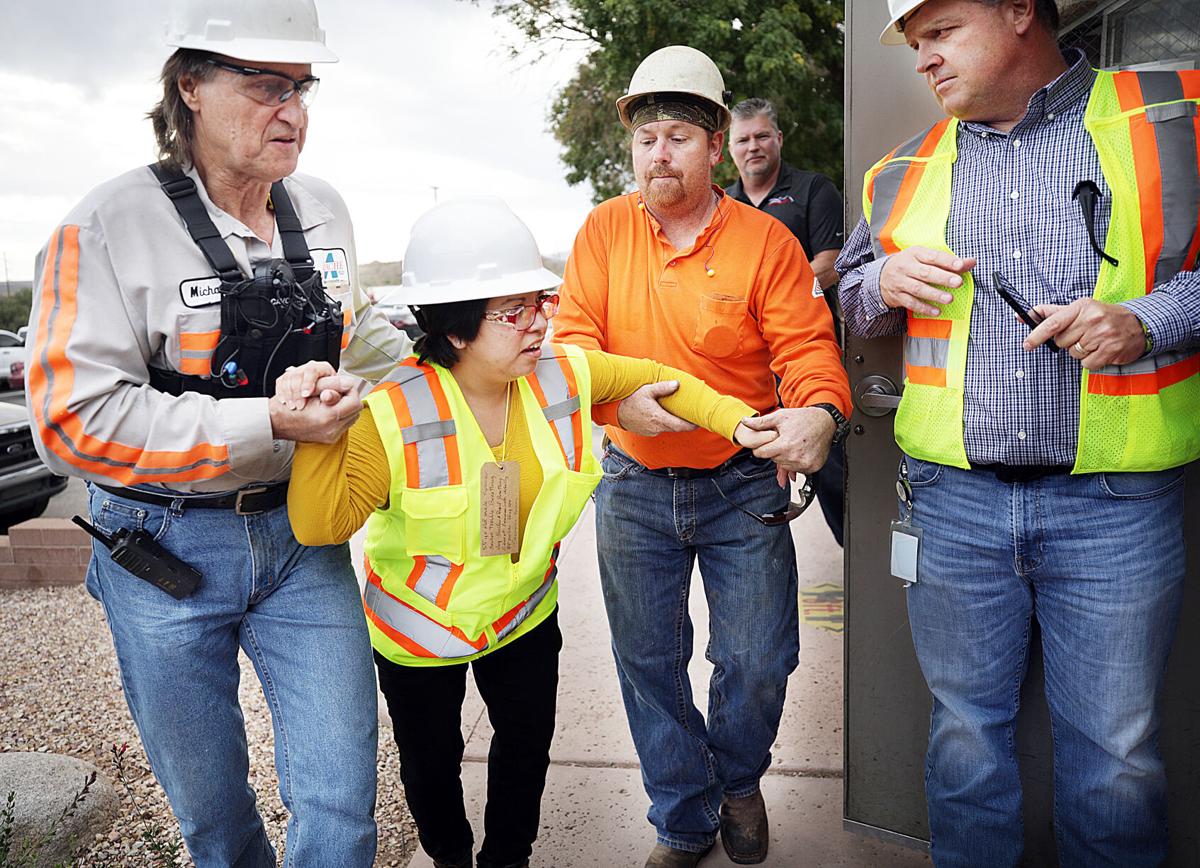 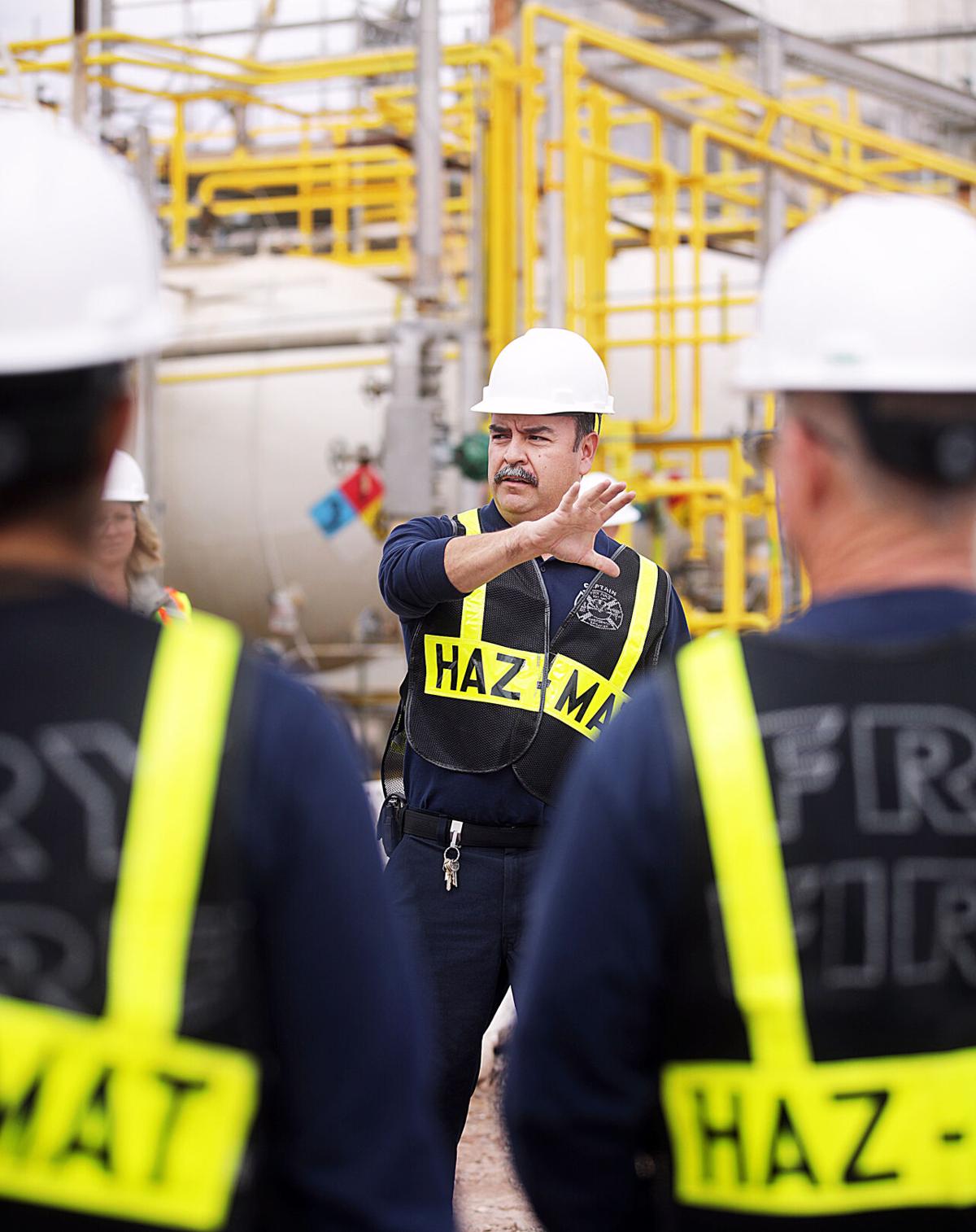 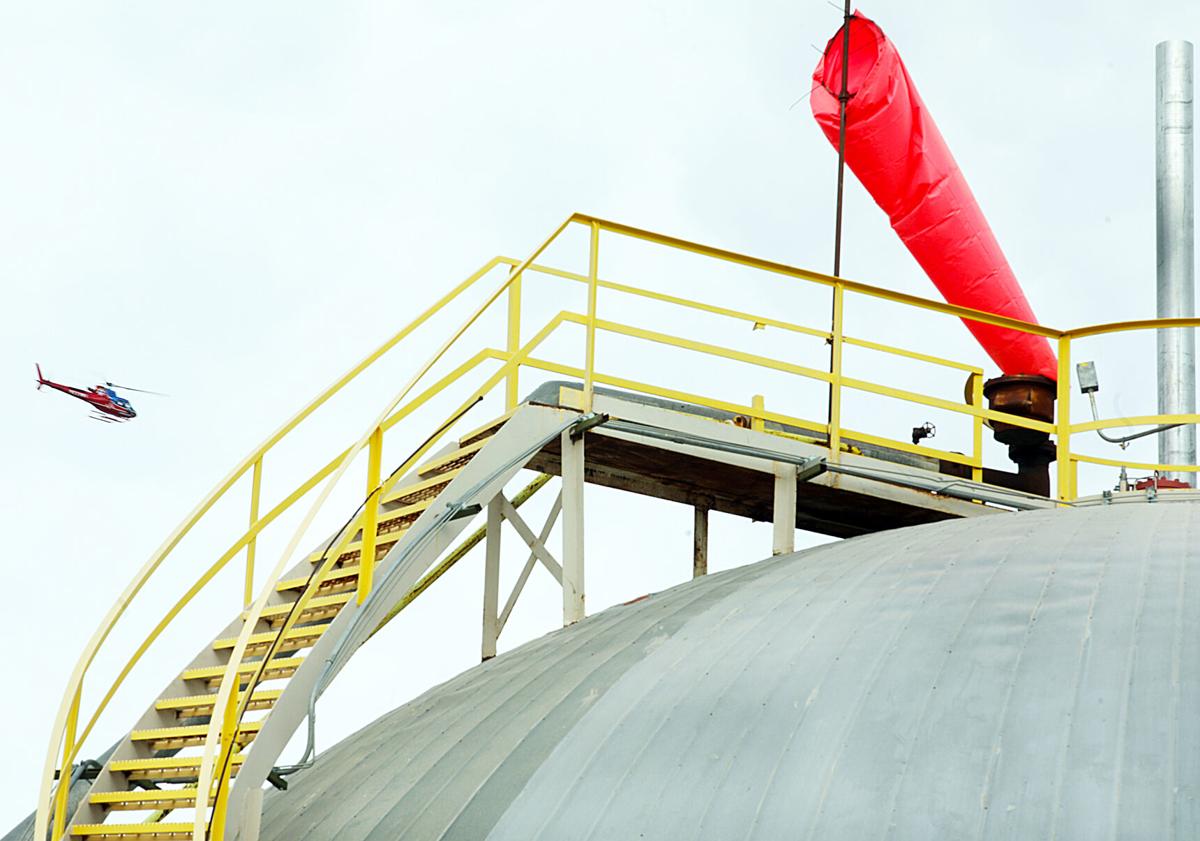 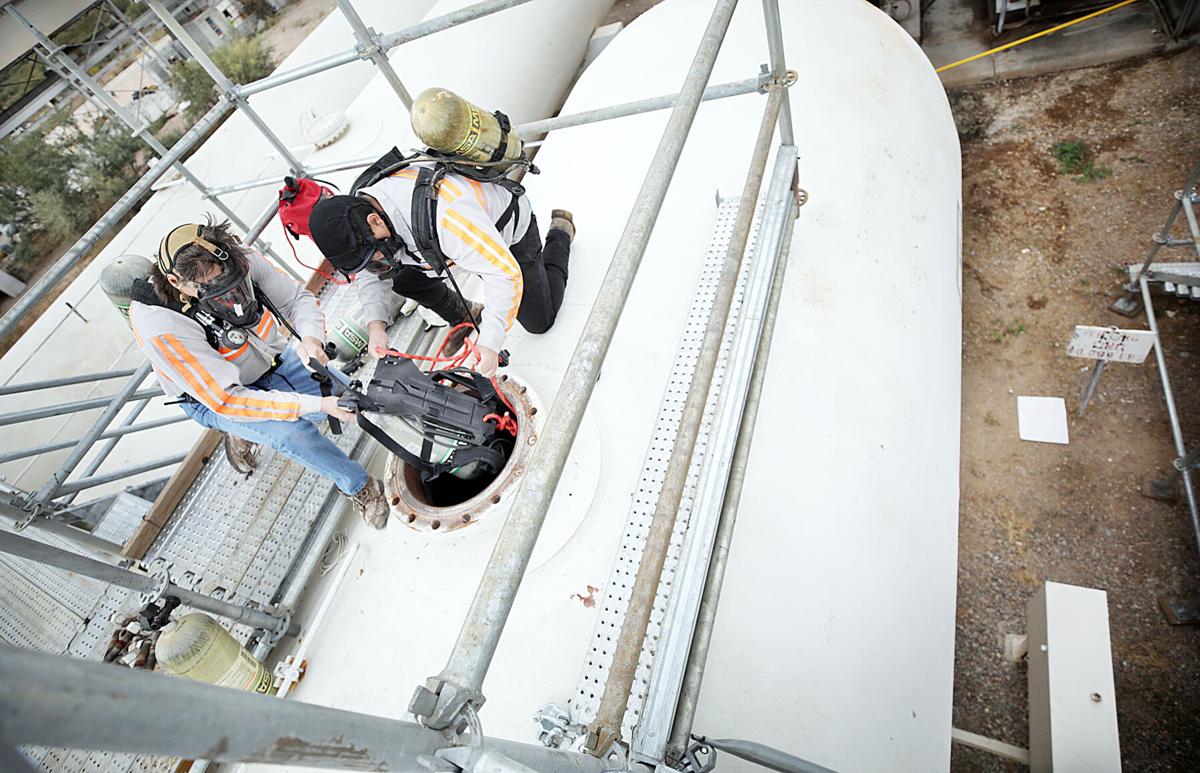 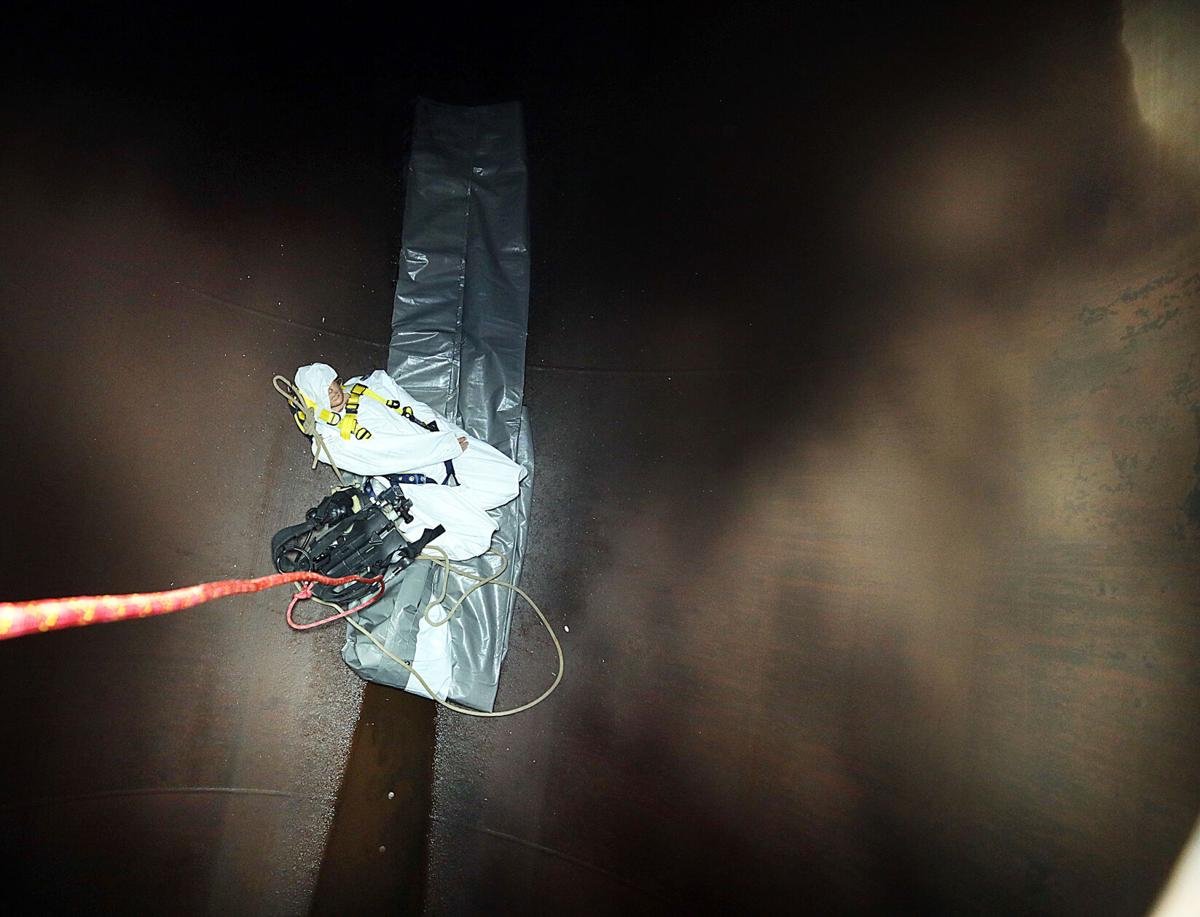 The stabilized faux victim from last week’s emergency exercise remains on the bottom of a tank. 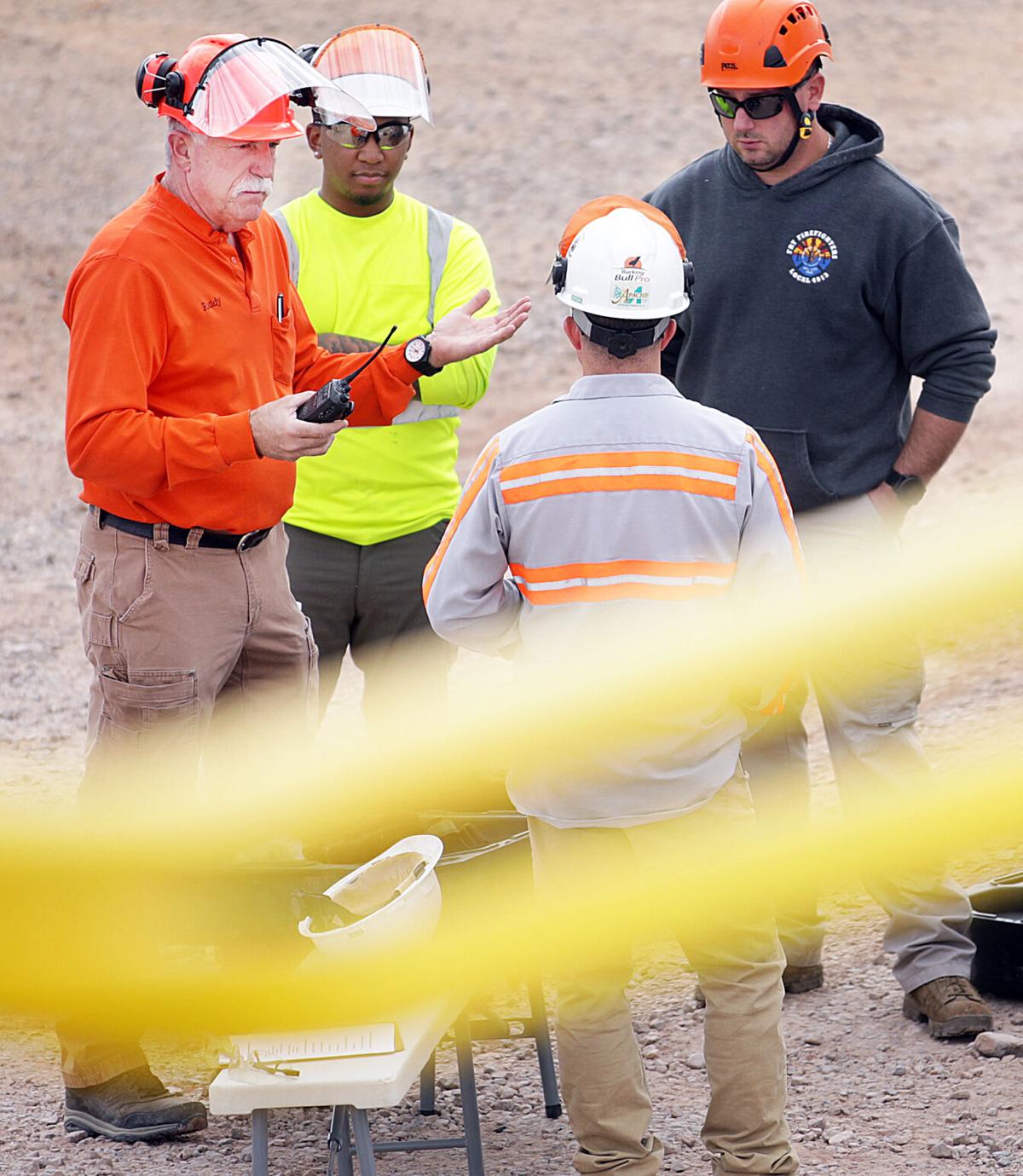 Randy Redmond, left, retired fire chief from the Sierra Vista Fire Department, is an organizer of the emergency drill at Apache Nitrogen.

The stabilized faux victim from last week’s emergency exercise remains on the bottom of a tank.

Randy Redmond, left, retired fire chief from the Sierra Vista Fire Department, is an organizer of the emergency drill at Apache Nitrogen.

The incident scenario started when an employee fell into an empty ammonia tank while making repairs to the structure and broke a hip. An Apache supervisor was contacted by the confined space attendant who reported the accident and described the victim as being in a lot of pain.

“The supervisor drove up to the site really fast, not really paying attention to where she was going because she was more focused on the person inside the tank,” Apache Nitrogen Safety Manager Nick Norton said as he outlined the scenario. “The supervisor hit an ammonia line, caused a leak and was incapacitated by the ammonia. The person was transported by Apache’s Emergency Response Team, which is our internal Level A, certified emergency response team.”

The emergency response team prepared the supervisor for air transport to the Benson Hospital.

The confined space attendant also was overcome by the ammonia leak and had to be transported to Benson hospital by ambulance.

The three-victim scenario provided Apache with an opportunity to access both internal and external teams to determine how they work together, said Randy Redmond, whose company, Redmond Consulting LLC, has been contracted by Apache for emergency training for about 28 years.

“Overall, the assessment is going well,” Redmond said early in the rescue effort. “There are always lessons to be learned. Every time you hold a drill like this you take something away from it. Your hope is to see things that go right as well as things that need improvement so when the real emergency happens, you react accordingly. If we were to leave today without learning something, I would question our ability to criticize ourselves.”

Norton praised scene commander Nick Trask for the way he accessed the scene and documented all the information. Trask and his team were responsible for protecting responders from the ammonia cloud and taking vital signs before they entered the scene.

“We have a good relationship with the different emergency response agencies,” he said. “We hold these hazmat drills every one to two years and we do about 32 hours of practice on these types of drills. The OSHA (Occupational Health and Safety Administration) requirement for a hazmat technician certification is eight hours a year, and we go above that requirement.”

Following the exercise, it was determined that the biggest area for improvement was in the response times, said Lyndon Denton, Apache’s business development and public relations manager.

“We found that we need to establish several designated helicopter landing pads around the property that are predetermined,” Denton noted. “Traffic in and out of the plant can be affected by where the helicopter lands, which caused delays during the drill. So, this is something that we want to work on.”

“The nice thing about these drills is that they help junior leaders develop skills and grow,” said Gabe Lavine, director of emergency management for the office of Emergency Services in Cochise County. “The exercise went well, but there were the normal communication challenges that come up when multiple agencies are involved.”

“This is a great opportunity for our crews to interact with Apache and other responding agencies,” he said. “It’s beneficial to be able to participate in this type of drill and learn from the experience in a real-world environment.”

The following information is from the Apache Nitrogen website:

Apache Nitrogen Products Inc. is the stat'e largest producer of nitric acid and ammonium nitrate products, which are used primarily for the mining and agricultural industries.

Located near St. David, ANPI has 70 staff members and an estimated economic impact of more than $25 million in gross sales annually.

Apache's plant is located on a 1,800-acre property and adheres to safe working conditions and practices. The company was established in 1920 and in its earlier days was known as Apache Powder Company.

ANPI has been vital to the economy and lifestyle of Cochise County and the southeastern Arizona region.