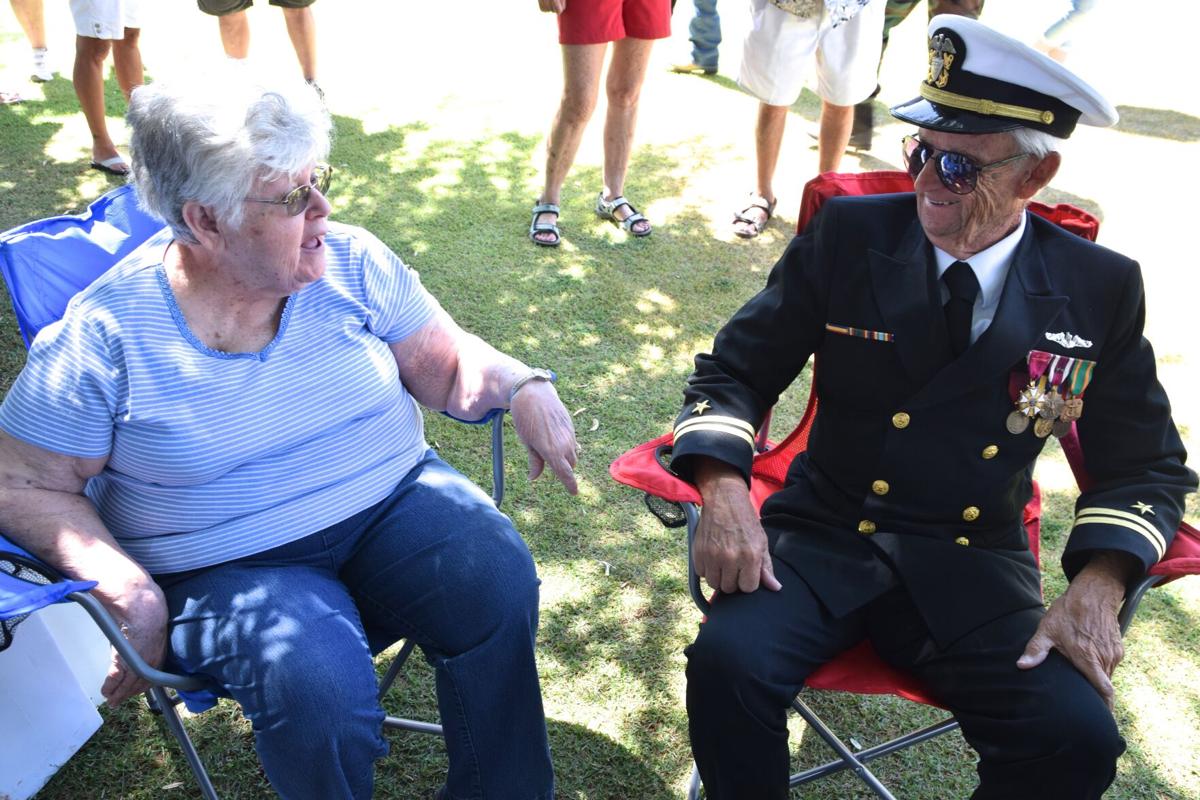 Navy Veteran James Jans and his wife of 57 years, Kathleen, have fun swapping stories about life as a Navy family at Monday's Memorial Day ceremony in Benson. 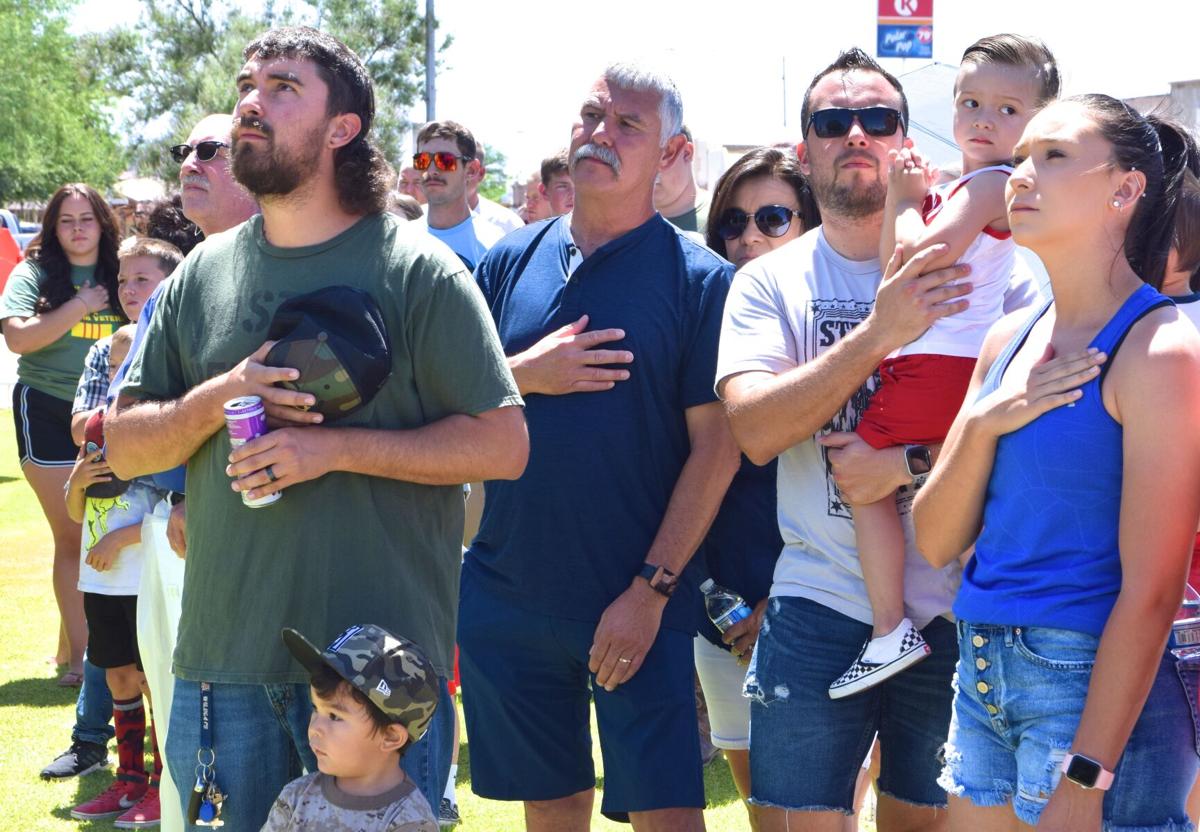 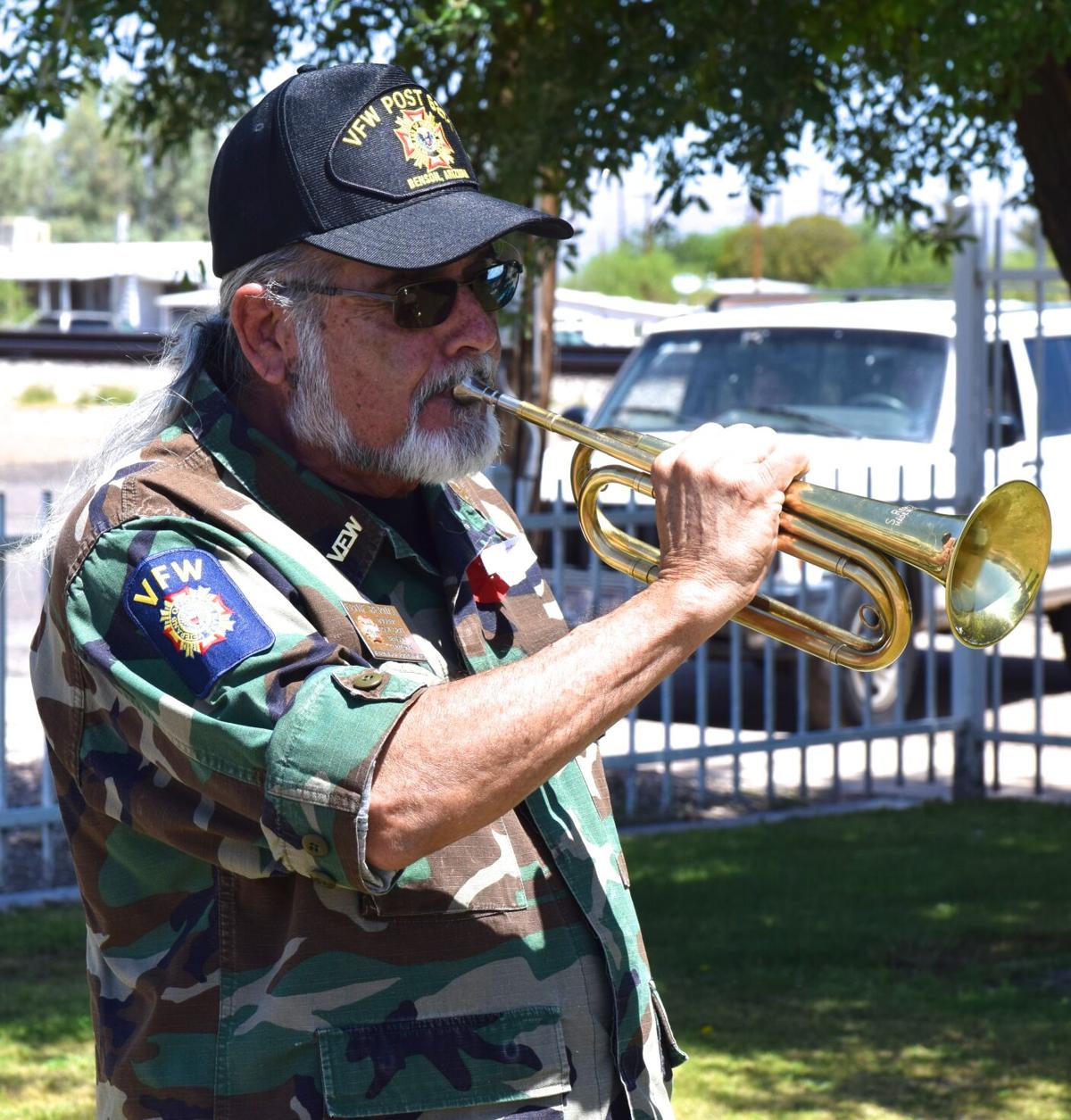 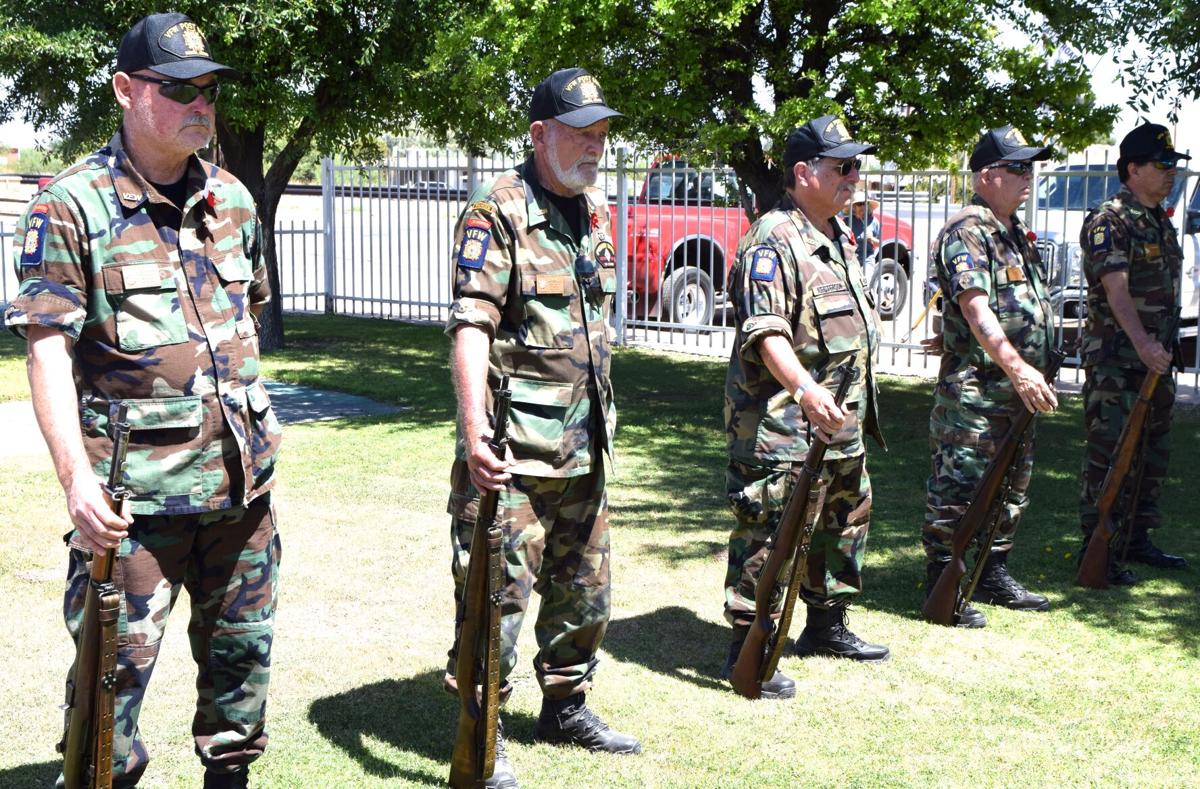 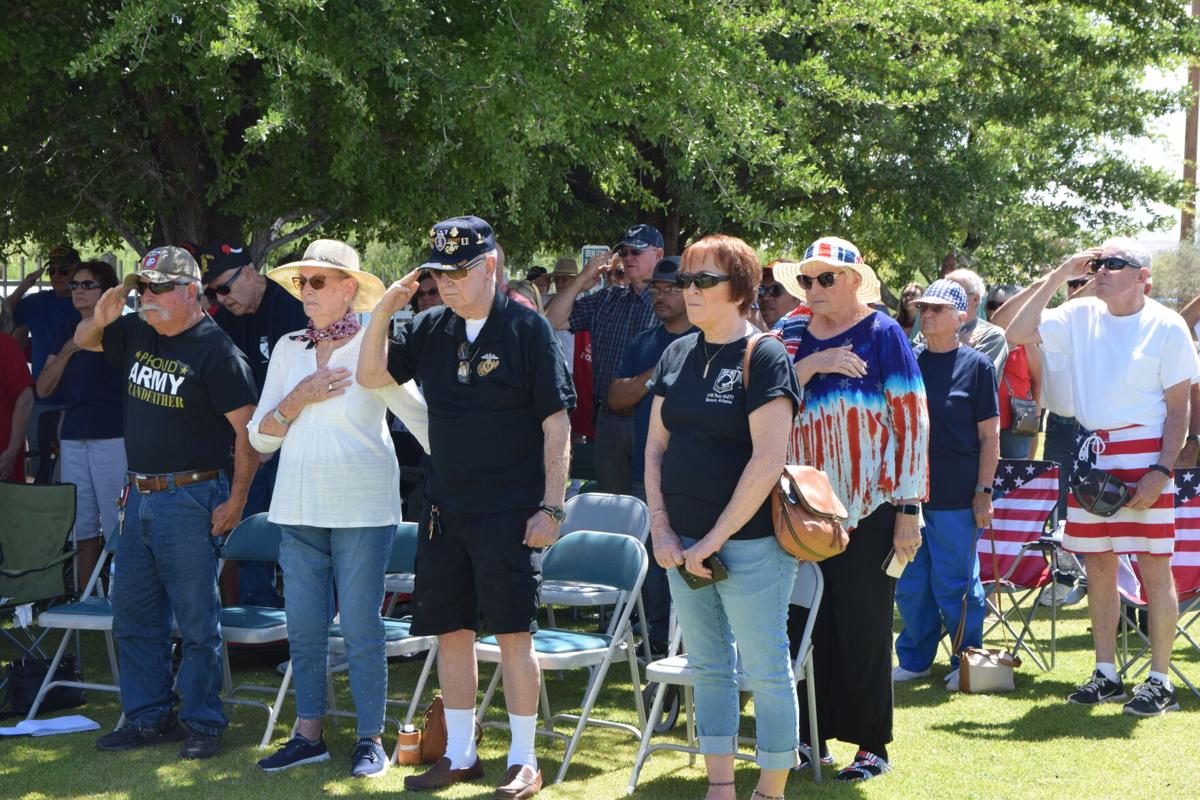 The crowd stands for the Pledge of Allegiance. 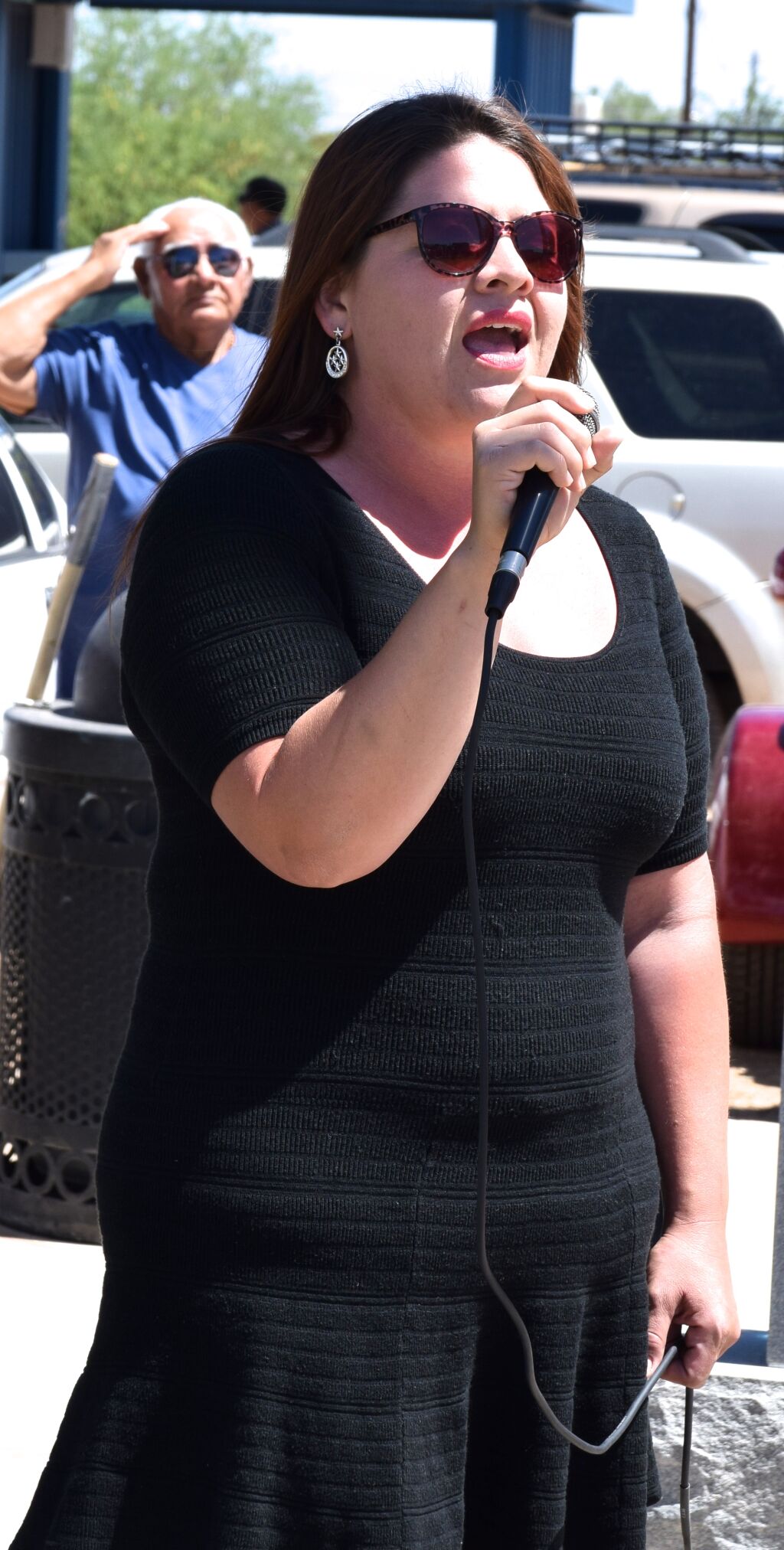 Navy Veteran James Jans and his wife of 57 years, Kathleen, have fun swapping stories about life as a Navy family at Monday's Memorial Day ceremony in Benson.

The crowd stands for the Pledge of Allegiance.

BENSON — In 1960, when he was 17 years old, Benson High School graduate James Jans remembers getting on a bus in front of the Horseshoe Cafe with big plans of joining the Navy.

“I was rejected three times because of my weight,” he said. “I only weighed 103 pounds and the cutoff weight was 111.”

But Jans persisted, and eventually hit the Navy’s required 111-pound weight. He served on a submarine during the Vietnam War, and after 21 years of service retired as a lieutenant.

James and his wife of 57 years, Kathleen Jans, were among those who attended Monday’s Memorial Day ceremony at Veterans Memorial Park in Benson.

“Our brother-in-law was killed in Vietnam, so Veterans Day is very important to us as we remember him and all the veterans that were killed while protecting our country,” said Kathleen. “We’re here today to honor all of them.”

From a proclamation read by Mayor Joe Konrad to a poem read by American Legion Auxiliary Pastor Audrey Palma, the message of remembering fallen comrades resonated throughout the ceremony.

“Memorial Day is our most solemn day of remembrance,” Konrad read from the proclamation. “Today we honor the men and women who made the supreme sacrifice and acknowledge and protect the ideals they died for, so their sacrifice shall not be in vain.”

Palma spoke of the significance of poppies and read the poem “In Flanders Fields” written during World War I by Lt. Col. John McCrae.

“Poppies became a symbol of sacrifice,” she said. “The American Legion has adopted the poppy as a remembrance of the men and women who have died for their country.”

Warren Johnson, a member of the Benson honor guard, said he lost a lot of friends in Vietnam.

“I’m here to remember them, and all the men and women who have died in service to our country,” he said.

“It’s important to remember all those who have died,” he said. “Memorial Day serves as a solemn reminder of lives lost in battles throughout our country’s history.”

Rikki Agelo, a visitor from Phoenix, said she makes a point of attending Memorial Day commemorations every year.

“I was both impressed and deeply moved by this ceremony,” she said. “It was a lovely remembrance with wonderful community support.

“I can tell by the number of people that are here and the way they responded to the ceremony that they support our armed services. I wasn’t sure what to expect when I arrived, but I thought this was a very nice ceremony.”

Drafted into the U.S. Army when he was 25 years old, Wayne Coons spent 2½ years in Vietnam.

“I got out in October 1970,” he said. “While in Vietnam, I was an ammunition’s specialist. I’m lucky to be here. A lot of my buddies never came back.”

Following the ceremony, the crowd was invited to a luncheon reception at the VFW.