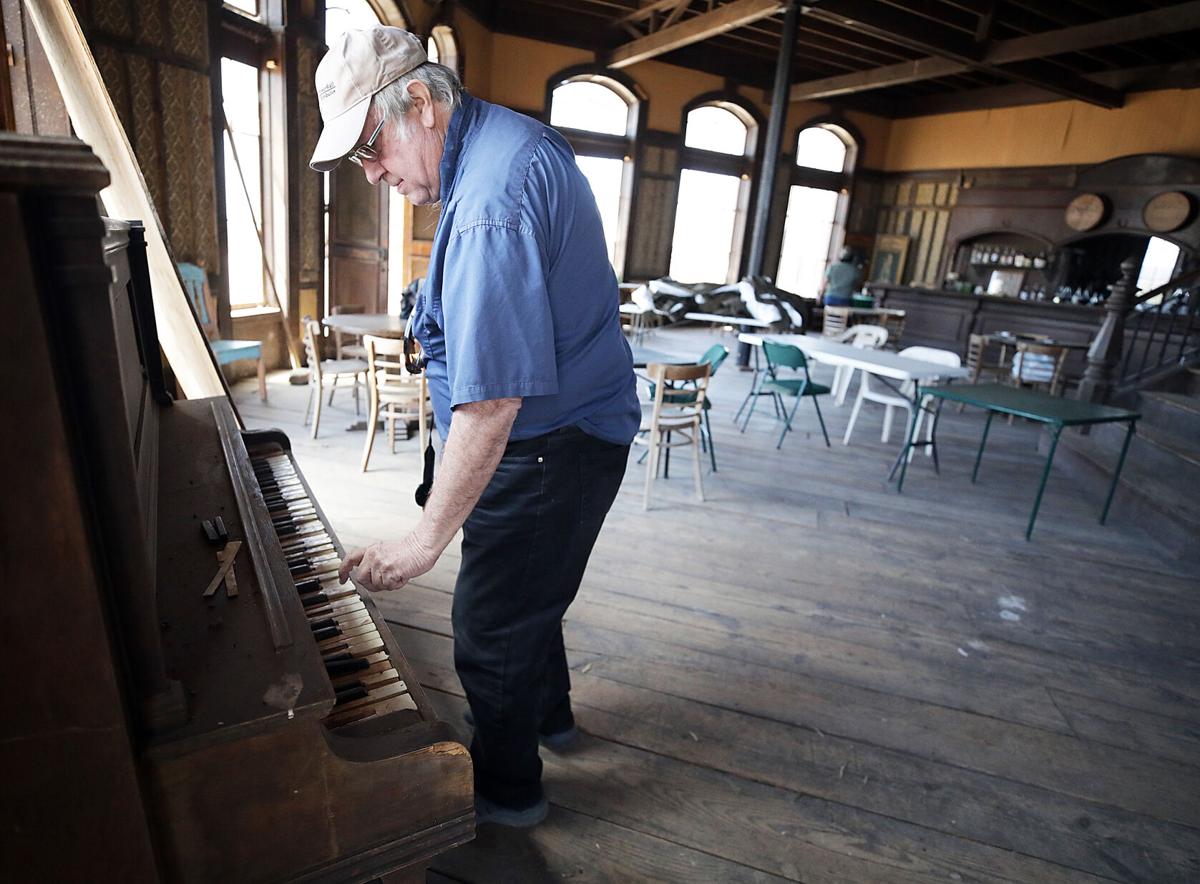 Bob Nilson of the Benson Visitor Center checks out a saloon that was made for 'The Quick and the Dead' last week as he toured the Mescal Movie Set. 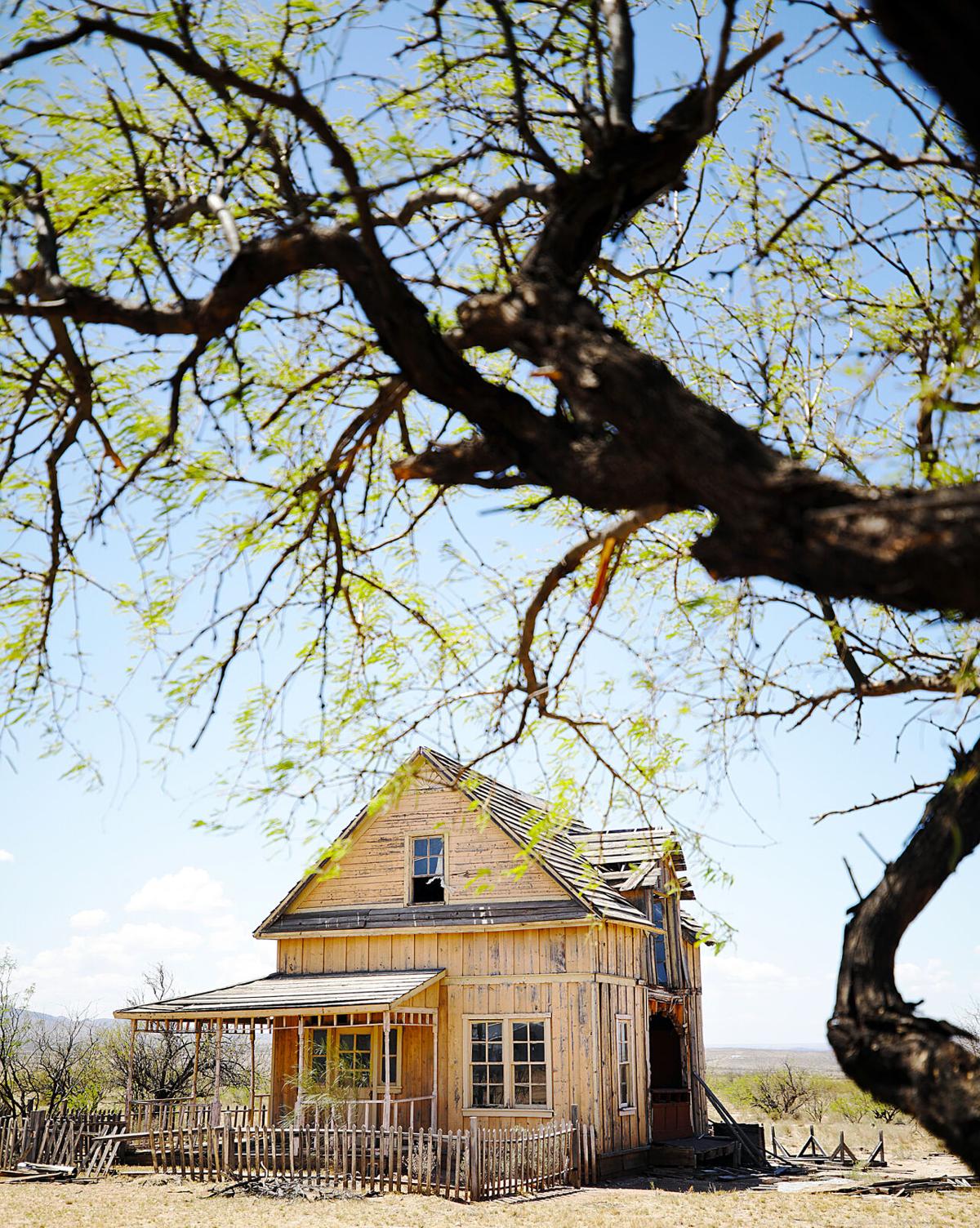 Wyatt Earp’s house, as depicted in the 1993 movie 'Tombstone,' still stands on the Mescal Movie Set. 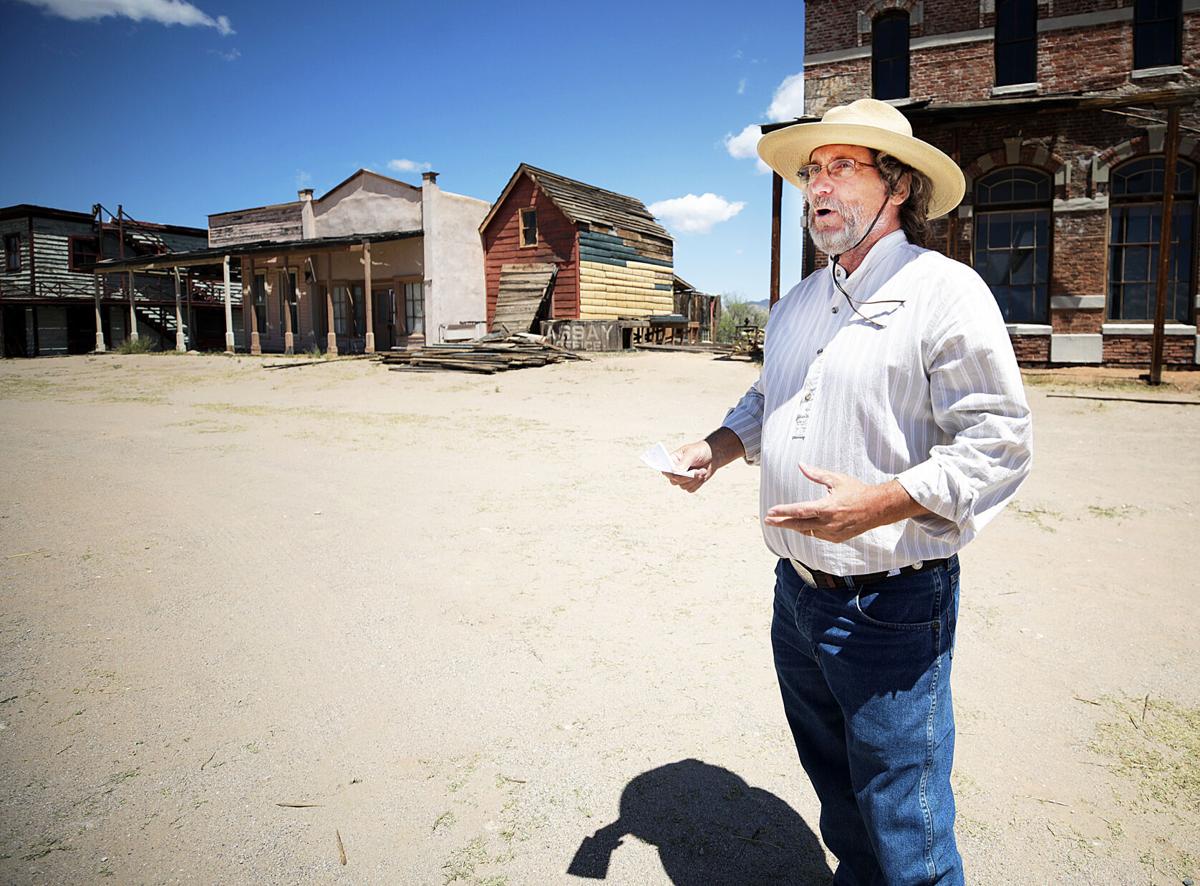 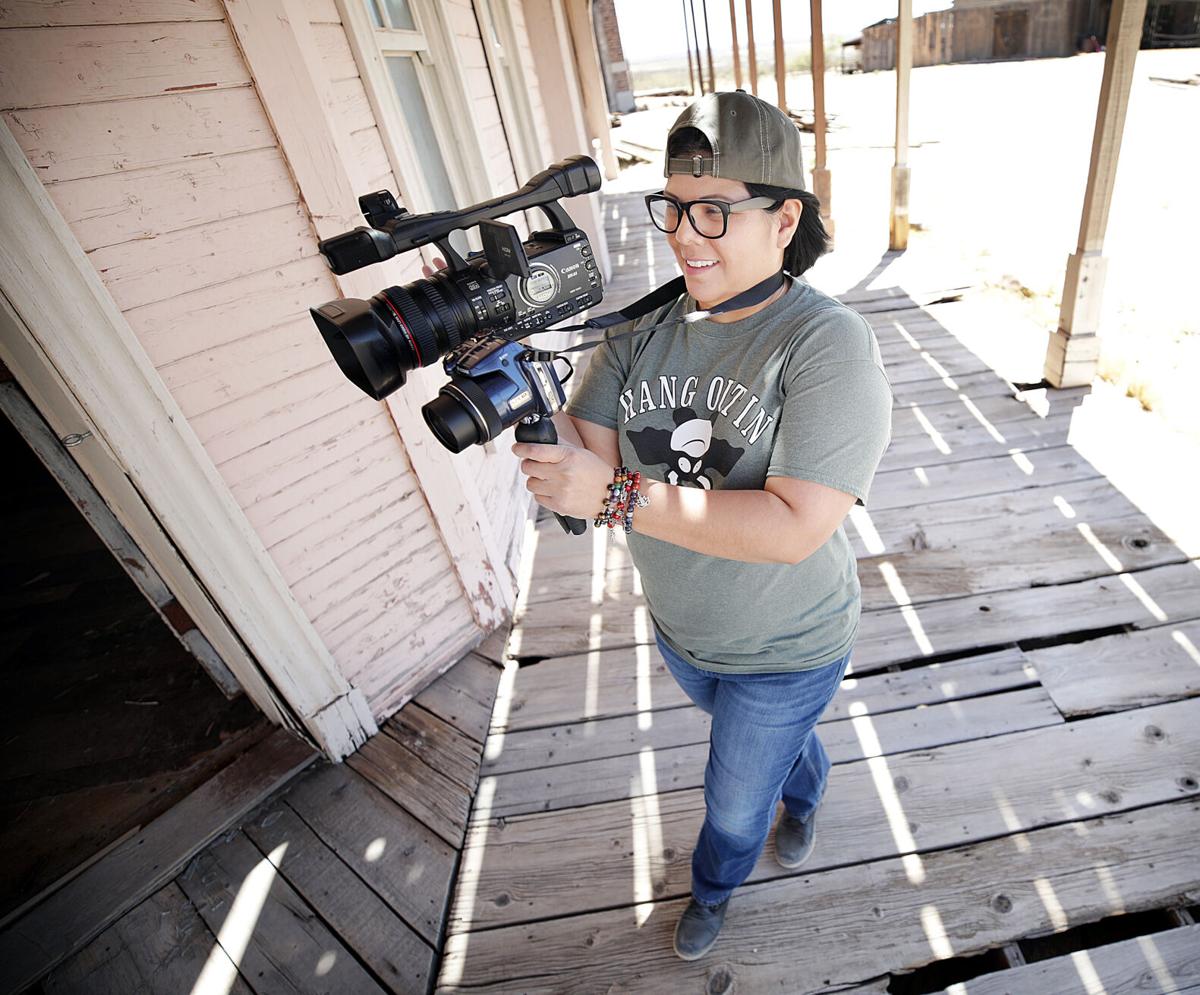 Benson Visitors Center employee Kathy Lara begins to put together a video as she peruses the movie set grounds last week in Mescal. 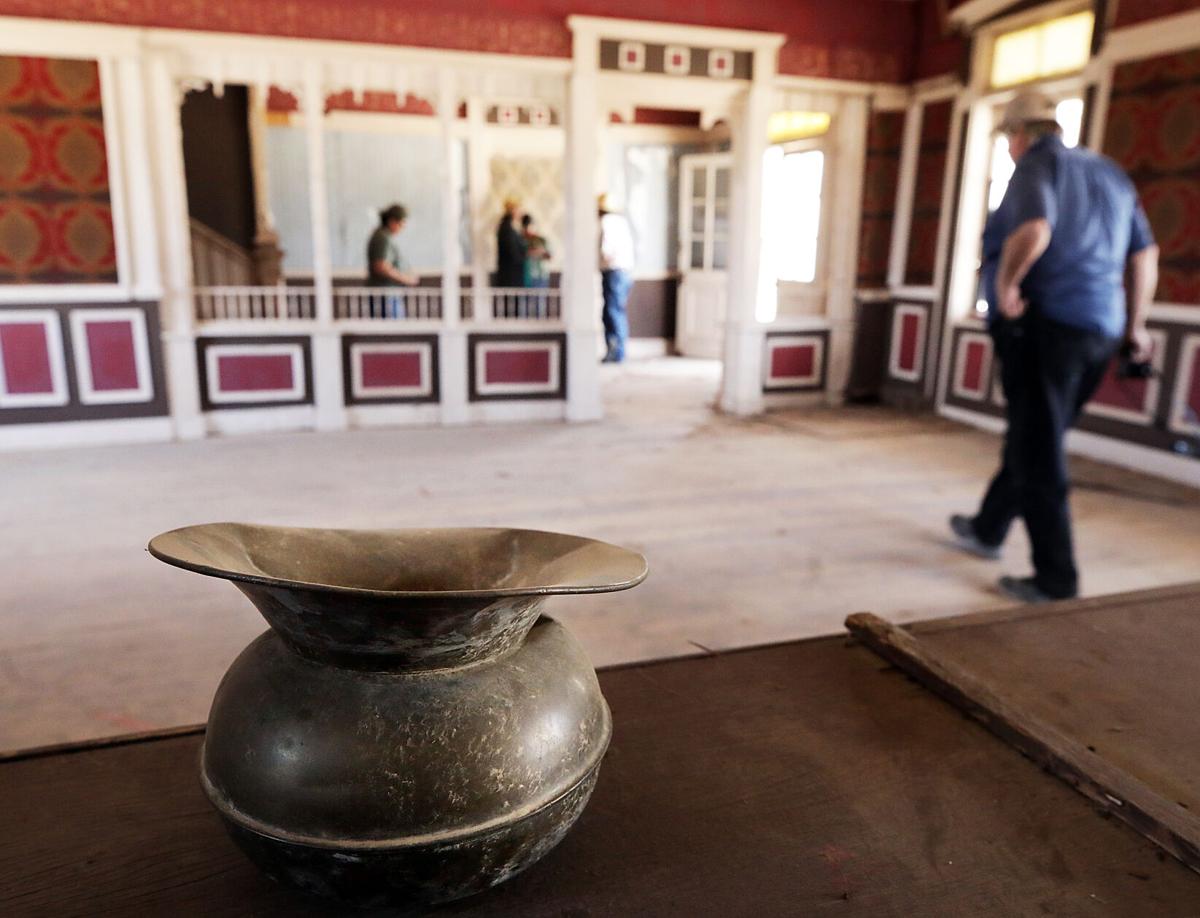 Several buildings are in need of major refurbishing on the old Western movie set in Mescal. 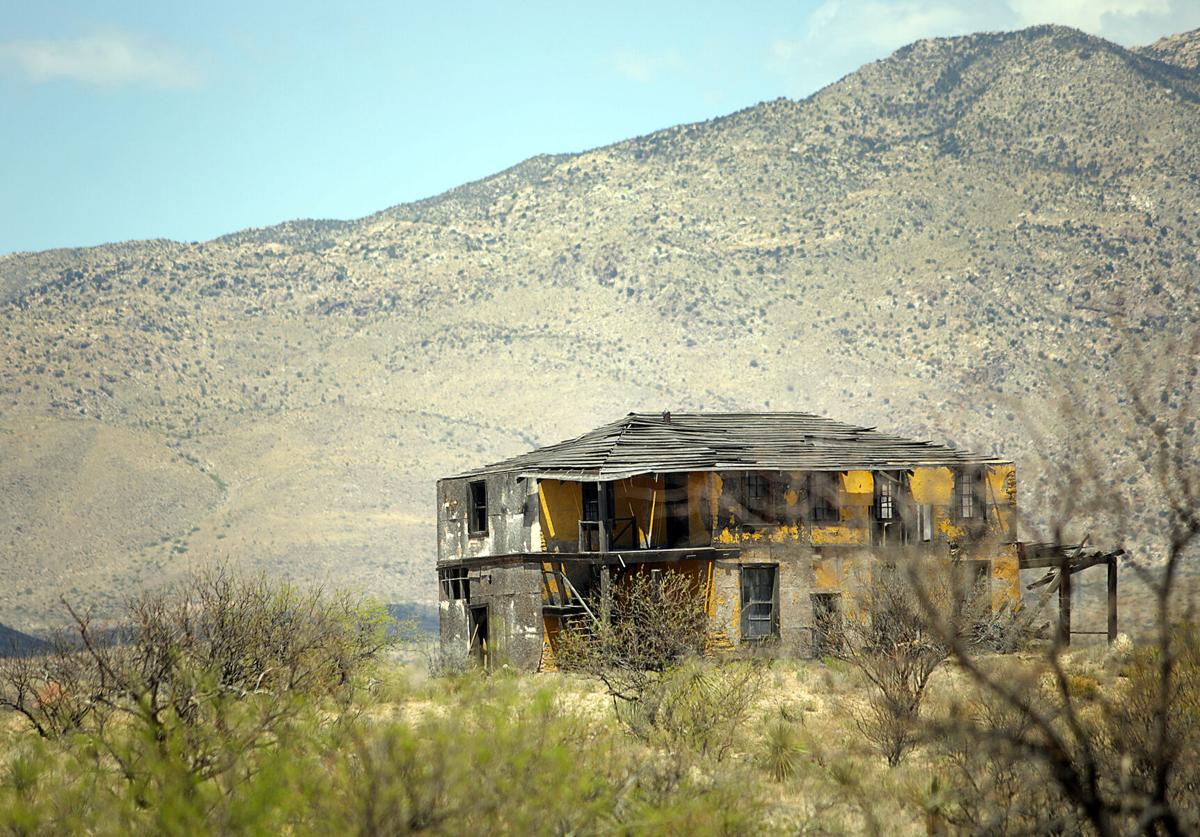 A building built for a television movie starring Danny Glover called 'Buffalo Soldiers' looms on the plains at the Mescal Movie Set. 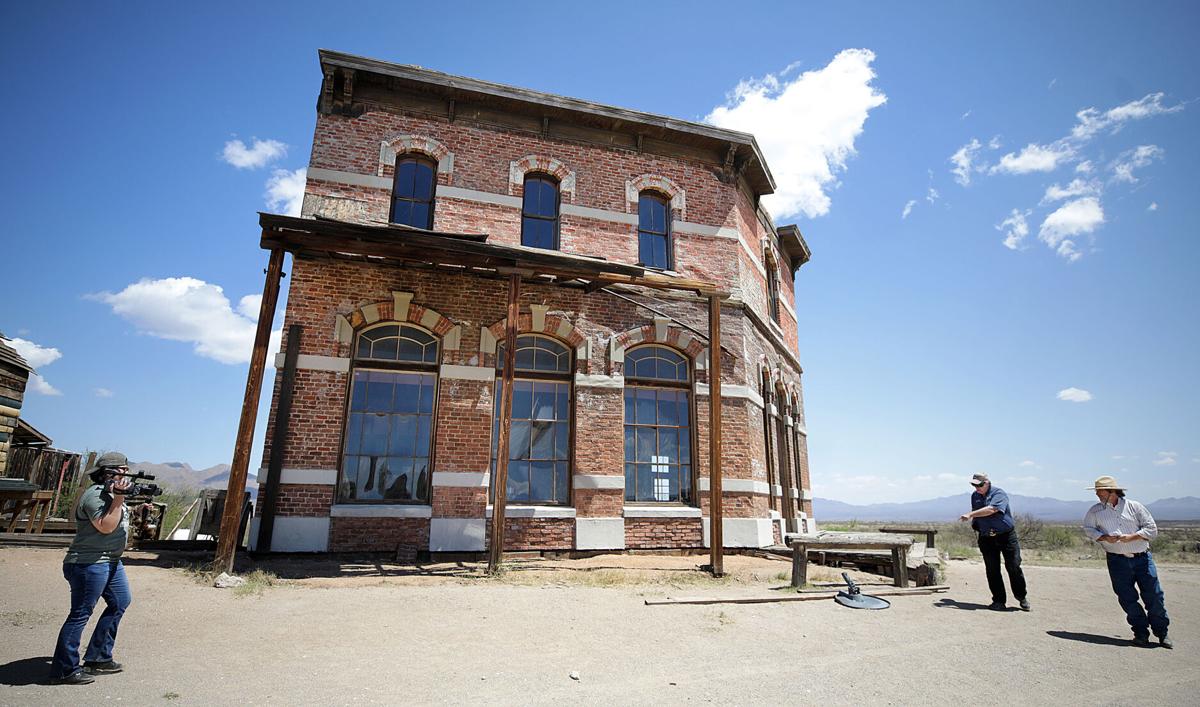 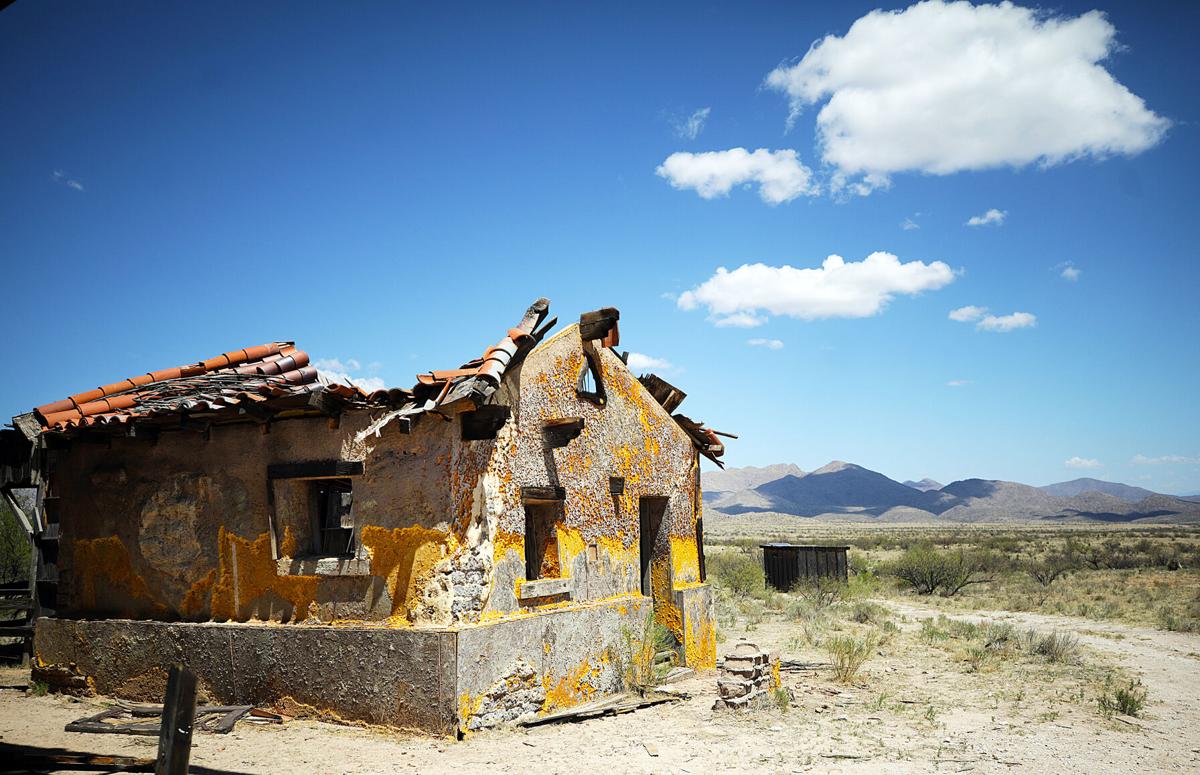 A movie set building is showing serious signs of aging.

Bob Nilson of the Benson Visitor Center checks out a saloon that was made for 'The Quick and the Dead' last week as he toured the Mescal Movie Set.

Wyatt Earp’s house, as depicted in the 1993 movie 'Tombstone,' still stands on the Mescal Movie Set.

Benson Visitors Center employee Kathy Lara begins to put together a video as she peruses the movie set grounds last week in Mescal.

Several buildings are in need of major refurbishing on the old Western movie set in Mescal.

A building built for a television movie starring Danny Glover called 'Buffalo Soldiers' looms on the plains at the Mescal Movie Set.

A movie set building is showing serious signs of aging.

BENSON — Not far off Interstate 10 in Mescal, the outline of an old film location can be seen in the distance.

Built between 1968 and 1970, the Mescal Movie Set served as a backlot for about 84 productions.

“Monte Walsh,” starring Lee Marvin and Jack Palance, was the first movie filmed at the location in 1970.

Today, the set’s Old West buildings are dilapidated and in dire need of repair. The town’s main street is lined with weathered buildings, leaning porches and piles of rotted wood, giving it more of a ghost town feel than a film site.

But efforts are underway to breathe life back into the old buildings, with a goal of attracting filmmakers and production companies to this once-bustling location.

The Kartchner family — of Kartchner Caverns — acquired the Mescal Movie Set in February and plan to rebuild.

Mark Sankey, who worked for Old Tucson Studios at one time, has been hired as the Mescal Movie Set marketing director.

“The word is out, and we’re already getting contacted by film production crews,” Sankey noted while giving a tour of the town’s buildings. “I think if we had waited much longer to start this reconstruction project, it would have been too late.”

Plans are to rebuild with a goal of preserving as many of the original buildings as possible.

“Bob made very famous films at both locations,” Dempster said. “Sometime in the mid-80s, he sold the two operations to Diamond Ventures, under one company.

“He always felt that the Mescal Movie Set was the jewel of the two properties when it came to filmmaking.”

While Dempster agrees the property is in serious disrepair, he believes it’s well worth rebuilding.

“Many famous movie stars made films there, and it’s an incredible place for its film history. I know Bob Shelton would be thrilled about the prospect of bringing the film set back to life,” Dempster said.

“Along with filming, our goal is to open the property up to the public for tours, corporate events, weddings and any number of activities.

“Unlike Old Tucson, which was an amusement park and film studio, the Mescal set was strictly used as an alternative location for movies,” Sankey said. “First and foremost, it’s a film set and there are no plans to bring in rides and make it an amusement park.”

Sankey’s tour of the property included sites featured in “Tombstone,” where he pointed to the OK Corral gunfight location, a building that was the Oriental Saloon, the billiard hall, pharaoh table and Wyatt Earp’s house.

“This building was Fly’s Photography in the movie ‘Tombstone,’ ” he said. “Here’s where the famous OK Corral shootout took place. I don’t know if you remember, but in the movie, Ike Clanton ran into that building while Doc Holliday was shooting at the window.”

Sankey also pointed out the spot where the Earps came around a corner and faced the McLaurys and Clantons just as the shootout started.

“One of the members of the McLaury gang died here, and where you see that pile of crumbled adobe, that’s where the movie’s OK Corral was. We plan to rebuild all of this and bring it back to how it looked while filming was going on here.”

Pointing to a tall building at the edge of the property, Sankey said the structure served as a barracks for the 1979 “Buffalo Soldiers” movie.

“The remake, starring Danny Glover, was also filmed there, only in 1997,” he said. “We would love to salvage that building, but it has really deteriorated through the years and may have to be demolished.”

Other buildings of importance include a hotel where Frank Sinatra shot a movie, as well as a supply store where Clint Eastwood was in a shootout during filming of “The Outlaw Josey Wales.”

A tall brick structure that Sankey said was built by Sharon Stone for “The Quick and the Dead” was another highlight.

Sankey, who grew up watching Westerns, said it’s thrilling to walk where some of the most famous scenes in Western movie history have been filmed.

“When it comes to Western movies, we have some great historic buildings here,” he said. “I’m glad the Kartchners want to restore the set, but it’s going to take a lot of money and effort. We’re looking for volunteers with the skills to help with different projects for this. Our goal is to bring filmmaking back to Cochise County.”

Bob Nilson of the Benson Visitor Center said the economic potential of reopening the movie set would be tremendous for Benson and Cochise County.

“We have people coming into the Visitor Center every week asking about seeing the set, but it’s been closed for several years now,” he said. “There’s a definite interest in seeing where these movies have been filmed. Once it’s up and running again, I believe the Mescal Movie Set will revive filmmaking in our area and provide a badly needed economic boost.”

The Mescal Movie Set is going through a major reconstruction and repair project with plans of bringing filmmaking back to Cochise County.

Organizers are requesting assistance with the project. Those interested in volunteering are asked to go to Facebook.com/mescalmovieset for information. In about two weeks, a GoFundMe account will be available for the revitalization project.