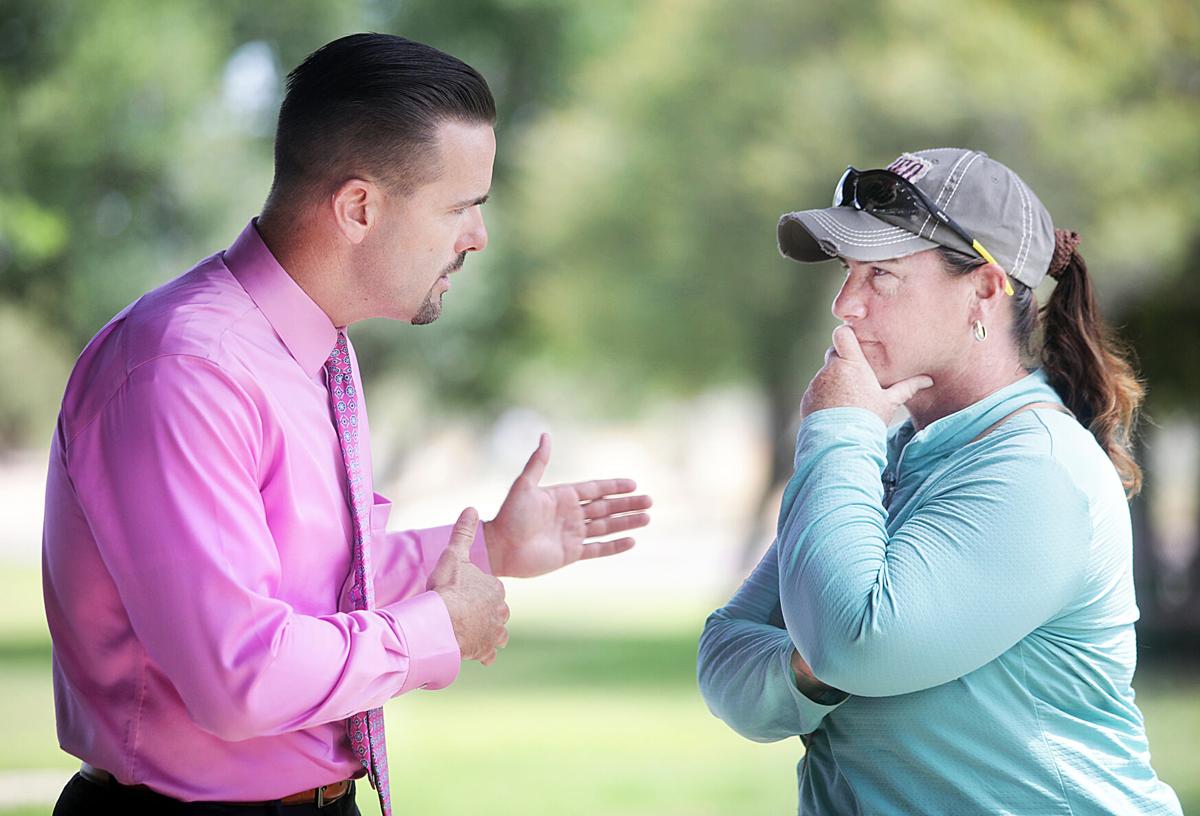 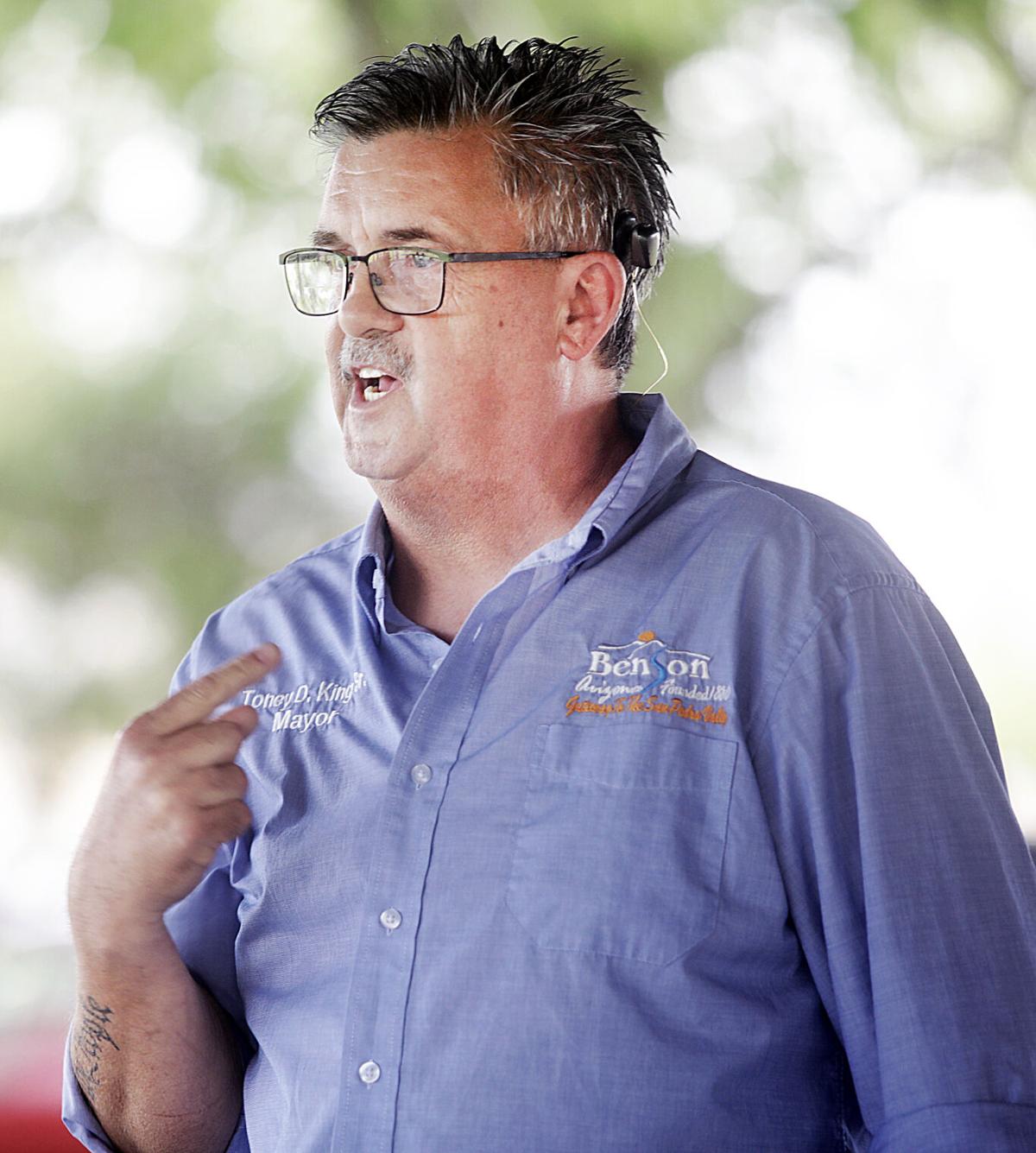 A passionate Toney King rails against the idea of changing the Cochise County logo during Saturday’s candidate forum in Benson. 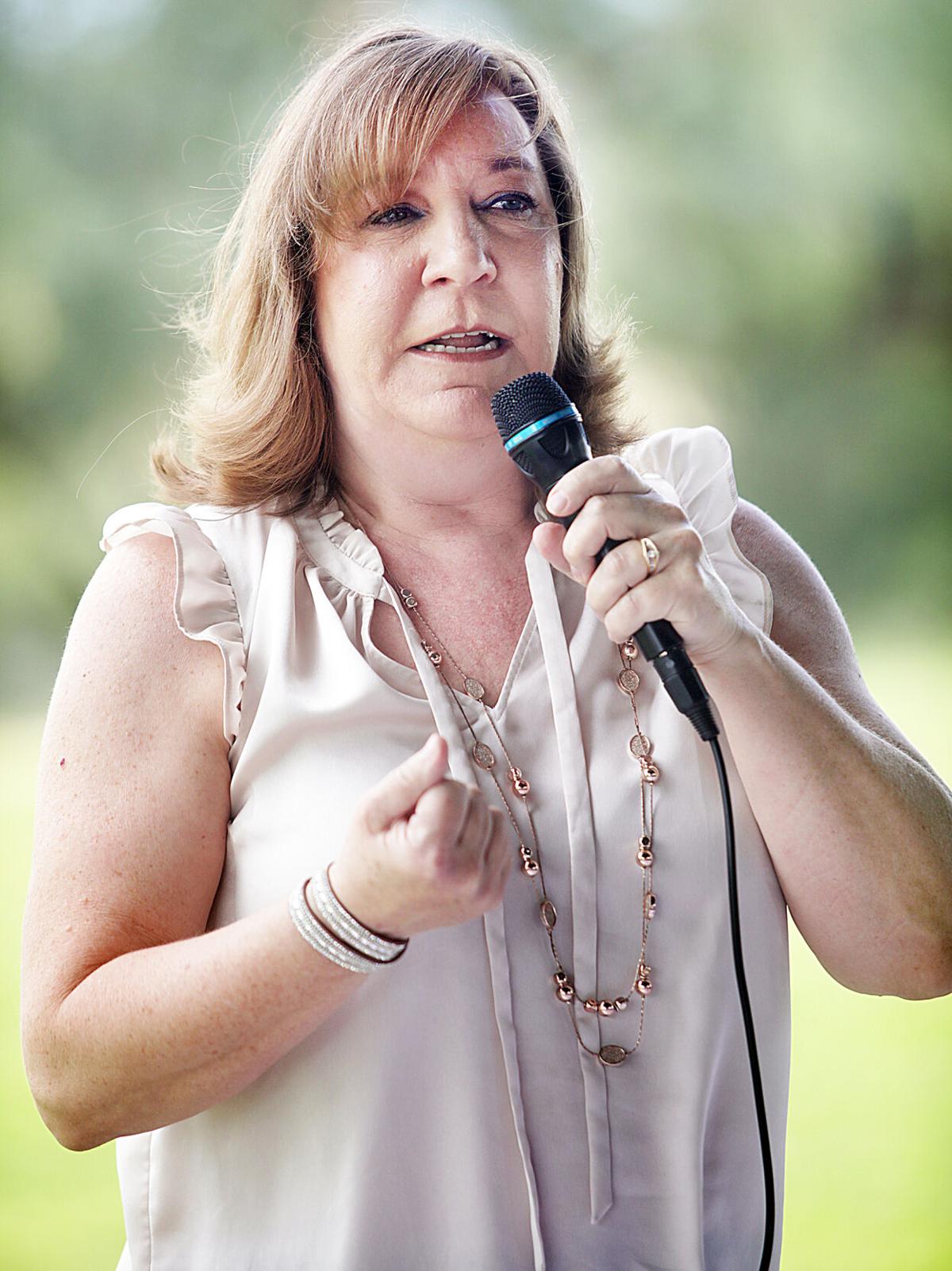 Supervisor for District 3 candidate Heather Floyd speaks to the crowd at last weekend's forum in Benson. 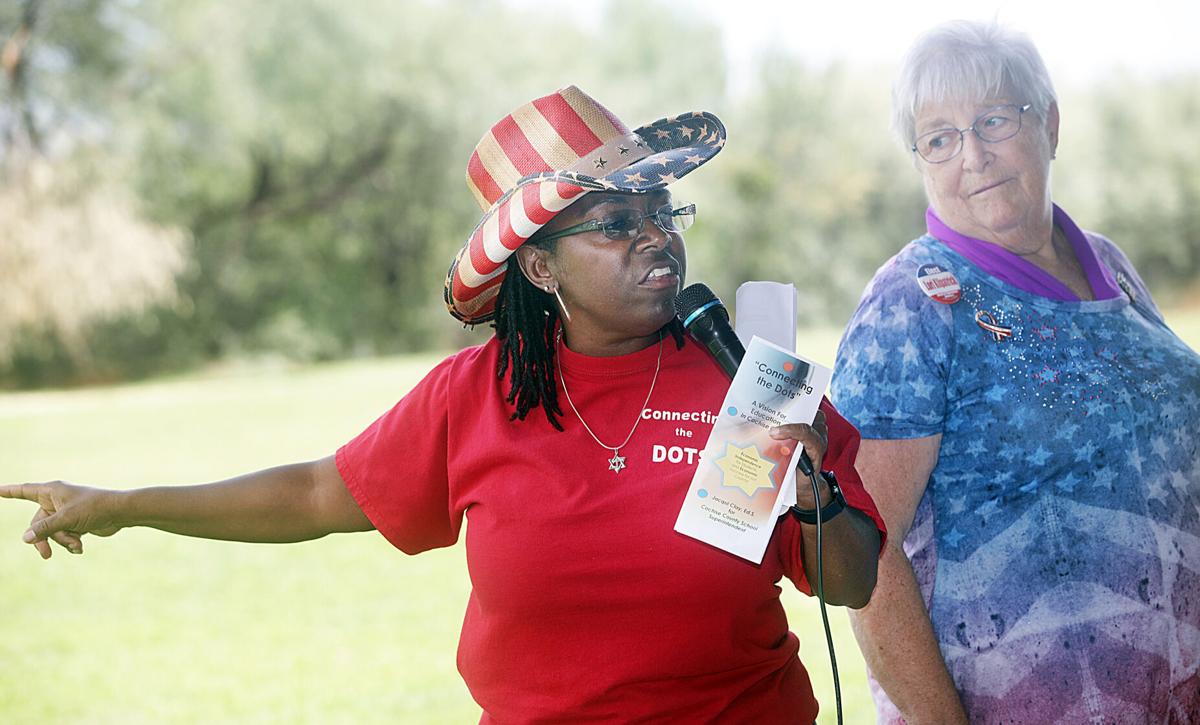 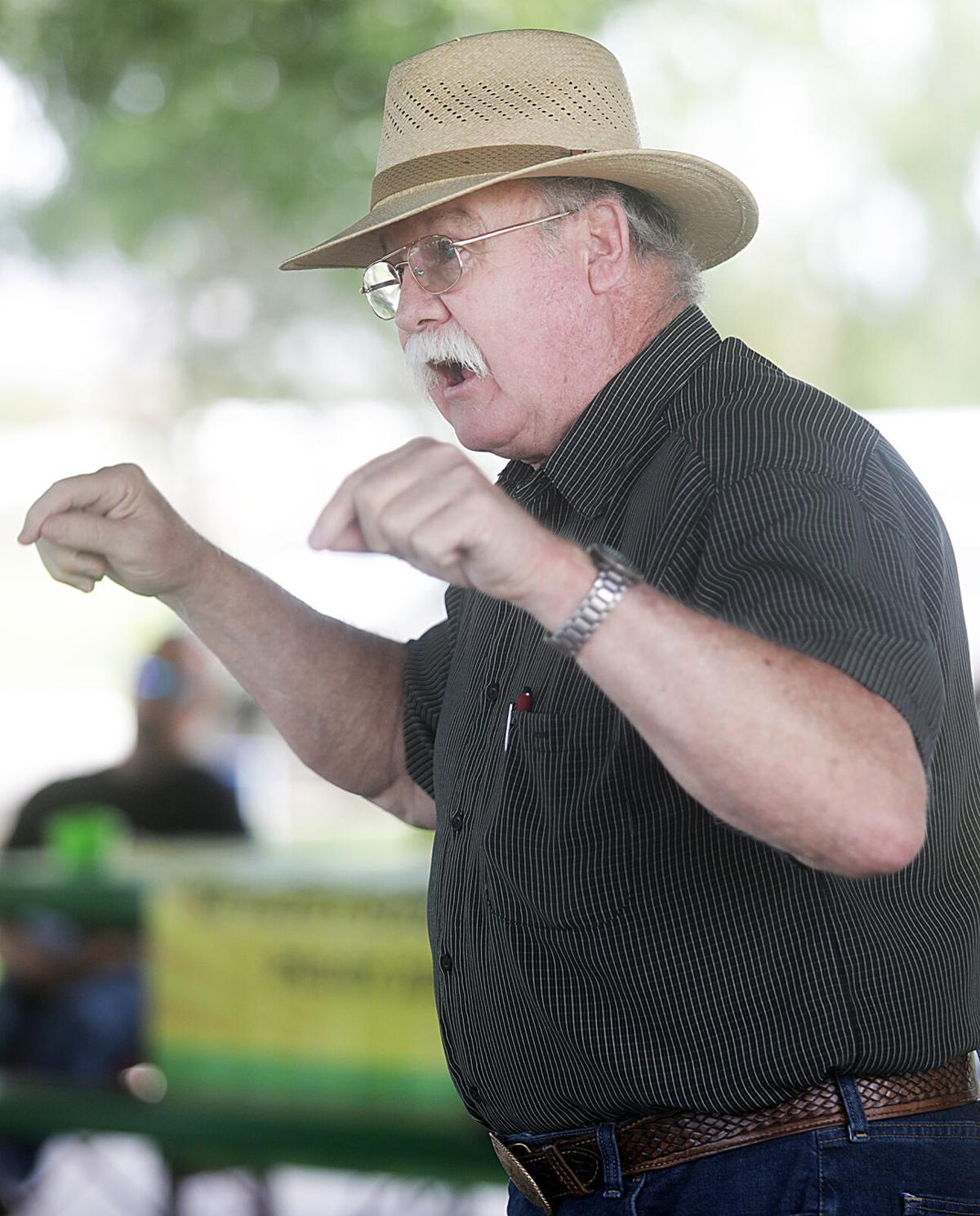 Sierra Vistan Kent Cooksley has a lot to say regarding the state of public education in Cochise County at Saturday’s candidate forum held in Benson. 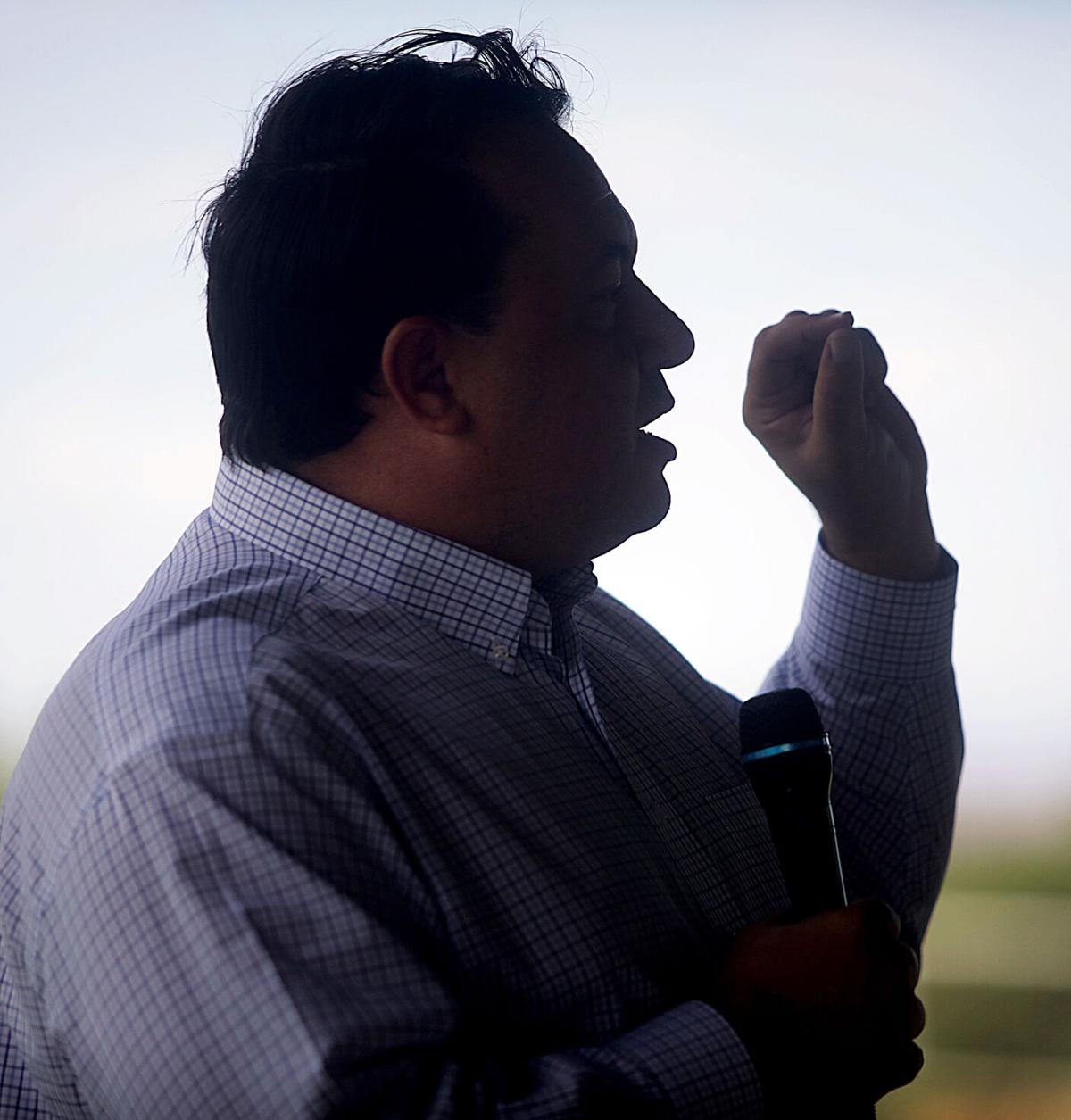 The silhouette of District 2 candidate Brandon Martin is seen while he speaks to Saturday’s candidate forum crowd in Benson. 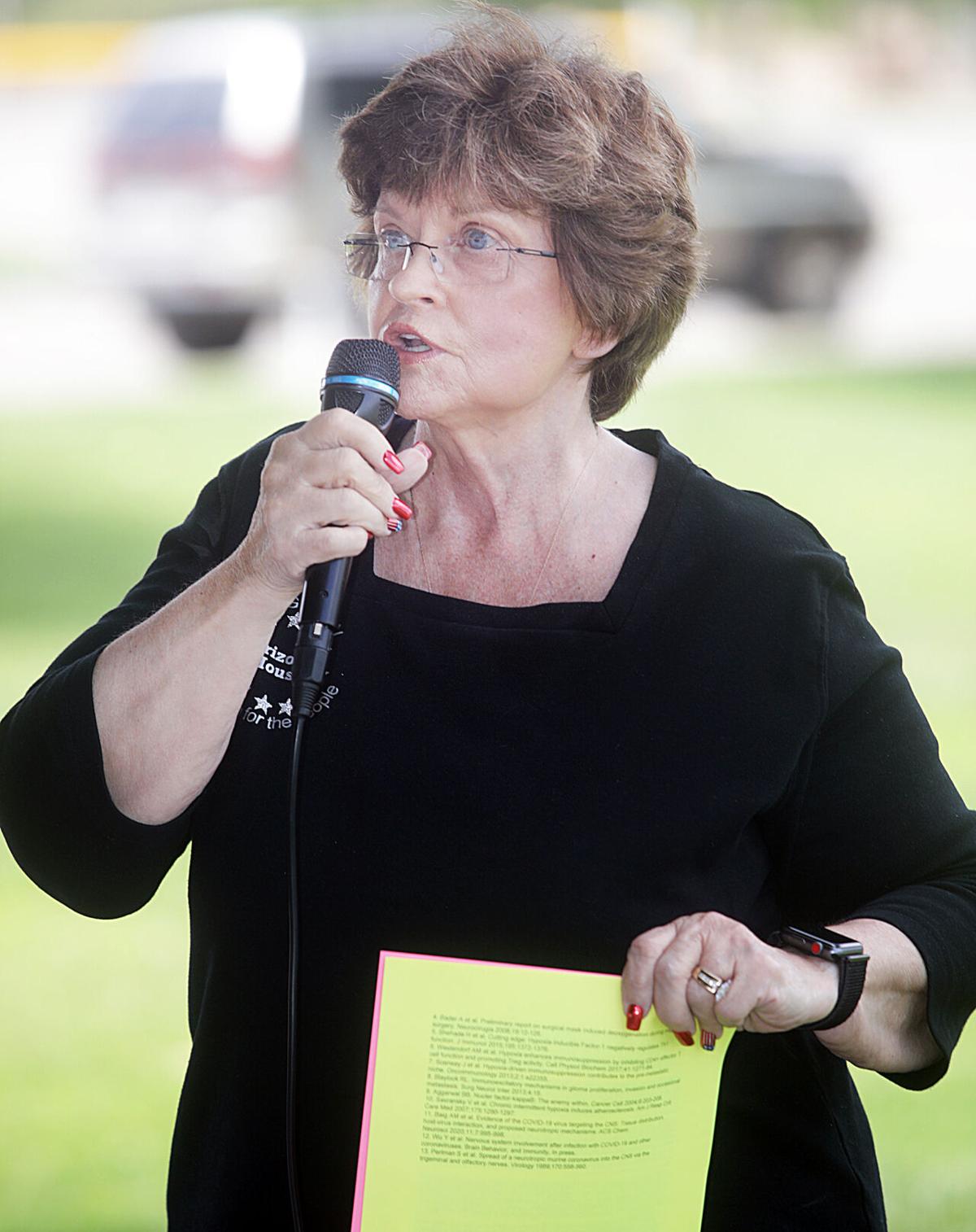 A passionate Toney King rails against the idea of changing the Cochise County logo during Saturday’s candidate forum in Benson.

Supervisor for District 3 candidate Heather Floyd speaks to the crowd at last weekend's forum in Benson.

Sierra Vistan Kent Cooksley has a lot to say regarding the state of public education in Cochise County at Saturday’s candidate forum held in Benson.

The silhouette of District 2 candidate Brandon Martin is seen while he speaks to Saturday’s candidate forum crowd in Benson.

BENSON — COVID-19 impacts, the Cochise County logo controversy, the need for economic growth and protecting Second Amendment rights were just some of the hot topics that filled the afternoon Saturday during a candidates’ forum at Lions Park in Benson.

Organized by St. David resident Katie Miller, the event drew 17 candidates and about 45 attendees who were there to learn candidates’ positions on different issues before voting in the primary on Aug. 4.

“Our elected officials, especially in Congress, must respect the Constitution of the United States,” said Congressional District 2 candidate Joseph Morgan, who delivered an address that touched on the need for less government control and his objection to being ordered to wear face masks.

“Our liberties are not up for debate. I respect your right to protect yourself by wearing a mask, but do not tell someone else they have to put something on...I am here to represent you and the constitution of the United States,” he said.

Candidates were given 10 minutes to speak, or could opt to finish early for a question and answer session with the audience.

Another CD2 candidate, Brandon Martin, spoke of how his top three platform items are to secure the border, support President Trump’s economy, and protect basic freedoms and liberties, which he said are coming under attack.

“I want to defend the Second Amendment for you...I will never infringe on your right to bear arms,” Martin said to a round of applause.

Cochise County Superintendent of Schools Jacqui Clay spoke about the frustrations that COVID has created for schools across the state and county when it comes to a list of ever-changing directives from the governor’s office.

“The biggest problem we have is that we’re given directives, but not the money or clarifications to carry them out. They continuously change.”

Clay said she is in constant communication with the governor and other state officials regarding how schools are expected to start classes in the 2020-2021 school year.

She also spoke of the importance of a solid educational foundation in building economic independence for both students and the area.

“Education is the foundation of what we are, and if we don’t give our kids motivation, direction and purpose, then they’re going to leave the county and go somewhere else,” Clay said.

Miller organizes the candidate forum every election. While Miller is the St. David and Benson area Tea Party organizer, she invites all candidates, regardless of party affiliation to the event.

“Katie Miller always does an excellent job of organizing the forum,” said Lori Kilpatrick, a Republican candidate who is running for Cochise County Supervisor District 2.

“I liked seeing the community participation and the local, state and federal candidates who spoke,” she said. “The forum gives people in rural communities an opportunity to meet candidates, hear their position on different topics, ask questions and make an informed vote.”

Like other candidates, Kilpatrick spoke of the need for economic development in Cochise County, an 18.5 percent downturn in tourism since 2016, and how the county’s population is stagnant, unlike the rest of the state.

“Other parts of Arizona are growing, but the growth rate in Cochise County is down and our children are leaving the area because they can’t afford to live here,” she said. “We are losing 245 jobs on Fort Huachuca, and when you couple that with COVID impacts, it translates to far less money for budgets.”

Kilpatrick said her goal for Cochise County is to find the kinds of jobs that improve community growth while supporting local heritage and culture.

“I can’t believe our county officials decided to change the logos with absolutely no public input. That logo is part of our history.” King said. “I want to know how you feel about this and how it ever got this far.”

Judd, the current District 3 Supervisor responded by saying that she is still fighting the logo change and noted that it started as a marketing strategy, or rebranding for the county to help improve tourism.

Floyd said the complete lack of transparency and failure to solicit public input prior to releasing the new marketing logos added to public backlash for changing the logo that Cochise County residents hold dear.

“Our county failed to include community input in the process, which was a mistake,” said Floyd, a county resident since 1986 and former 19-year employee of Arizona G&T Cooperatives.

The forum ran from 10 a.m. to 2 p.m. Candidates were invited to set up tables with information, and election signs filled the pavilion area where the speakers and attendees gathered.

“I received positive feedback from the candidates, which was great to hear,” Miller said. “I organize these because I believe it’s important to get involved in voting and be educated about who you’re voting for. I do this every election cycle and am always thanked by the candidates and community for holding the forum.”

The following candidates participated in a candidates’ forum in Benson