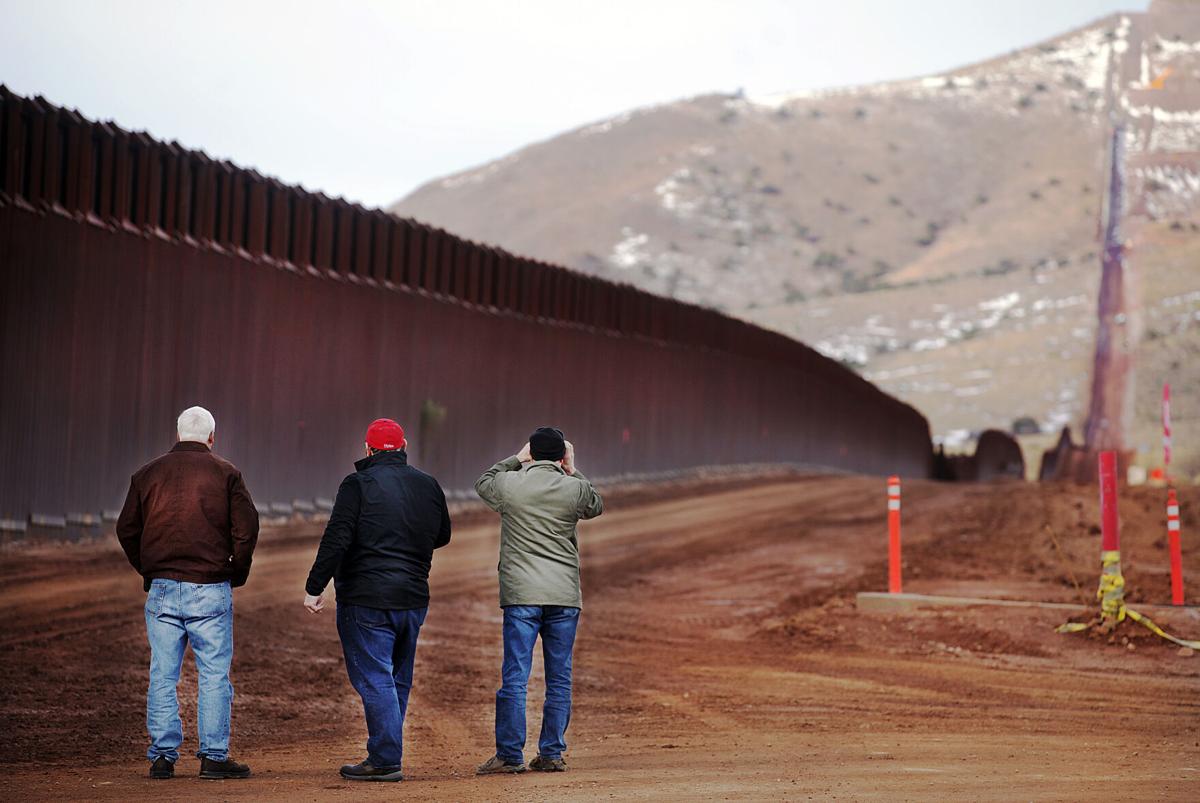 Out-of-state politicians view the southern border fence Friday as they receive a tour of the area where human smuggling is proliferating in and around the Sierra Vista area. 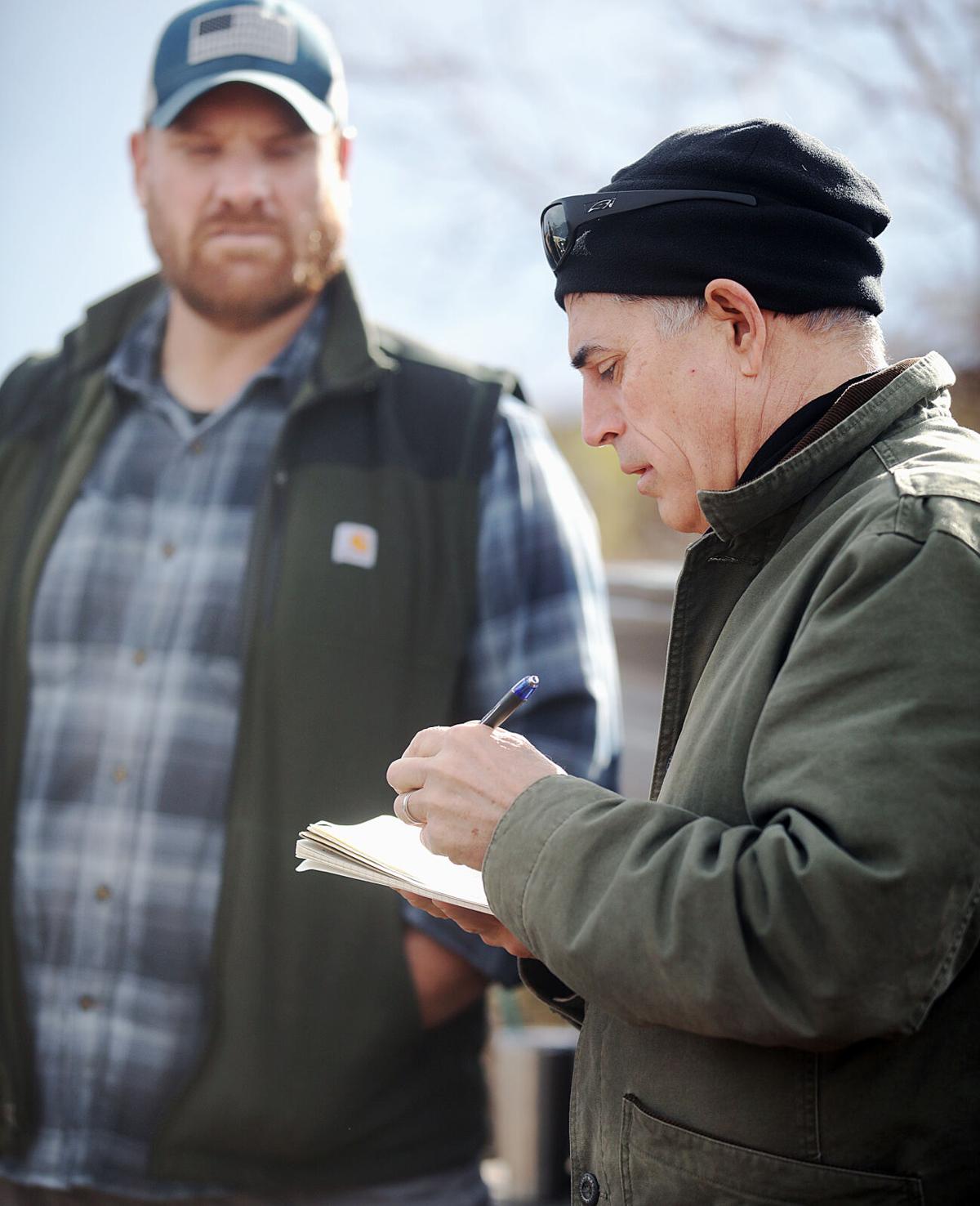 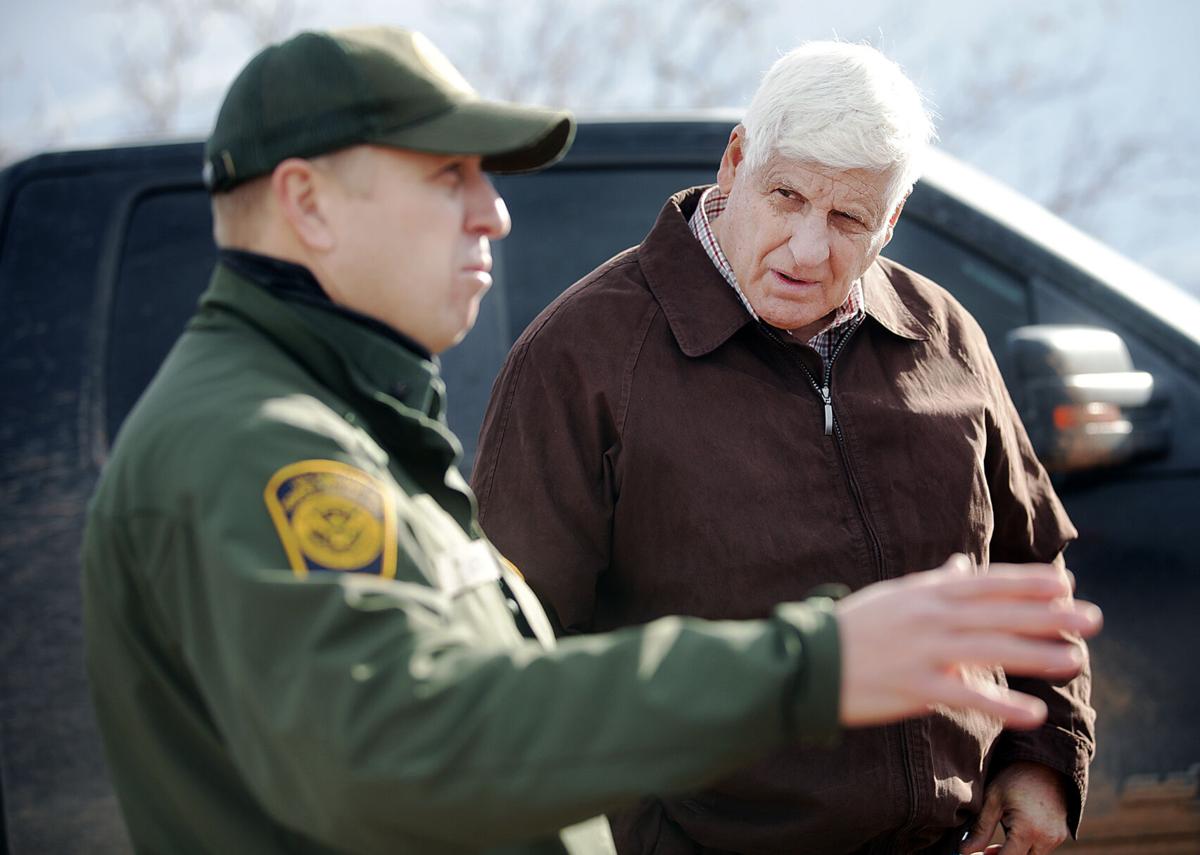 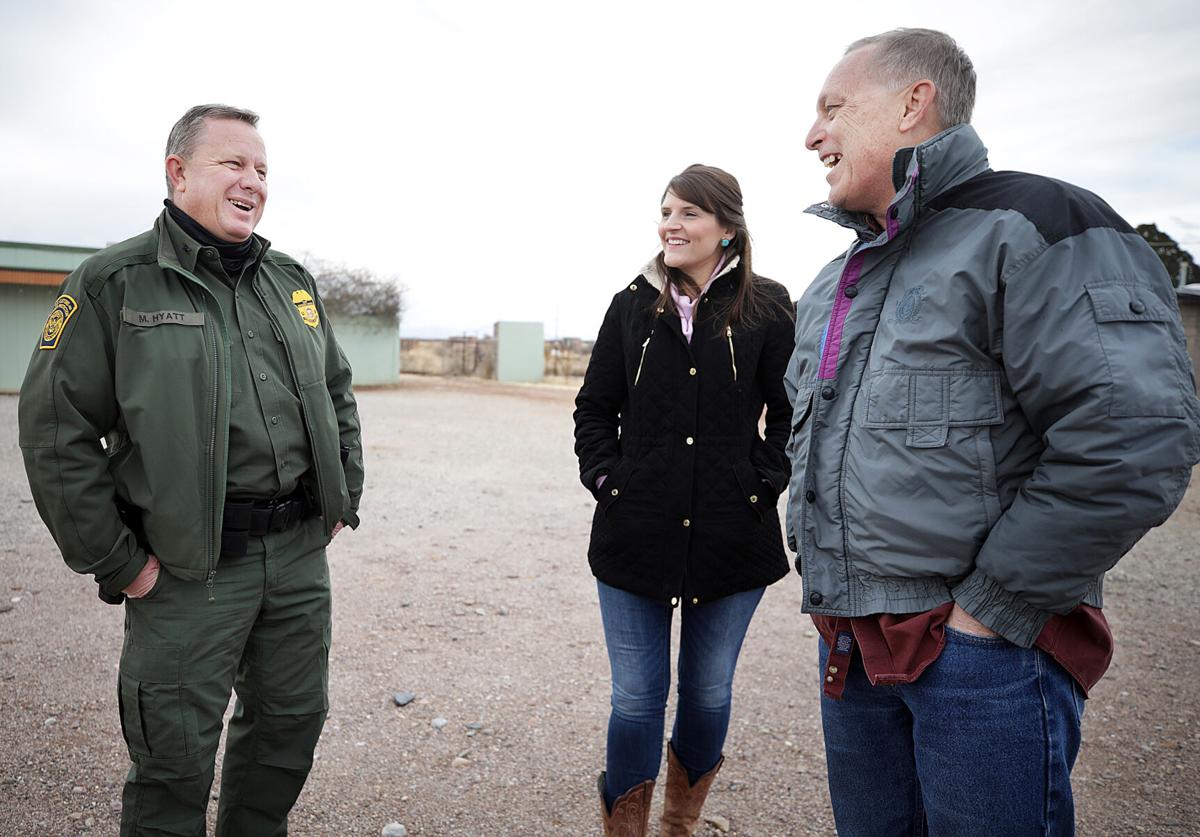 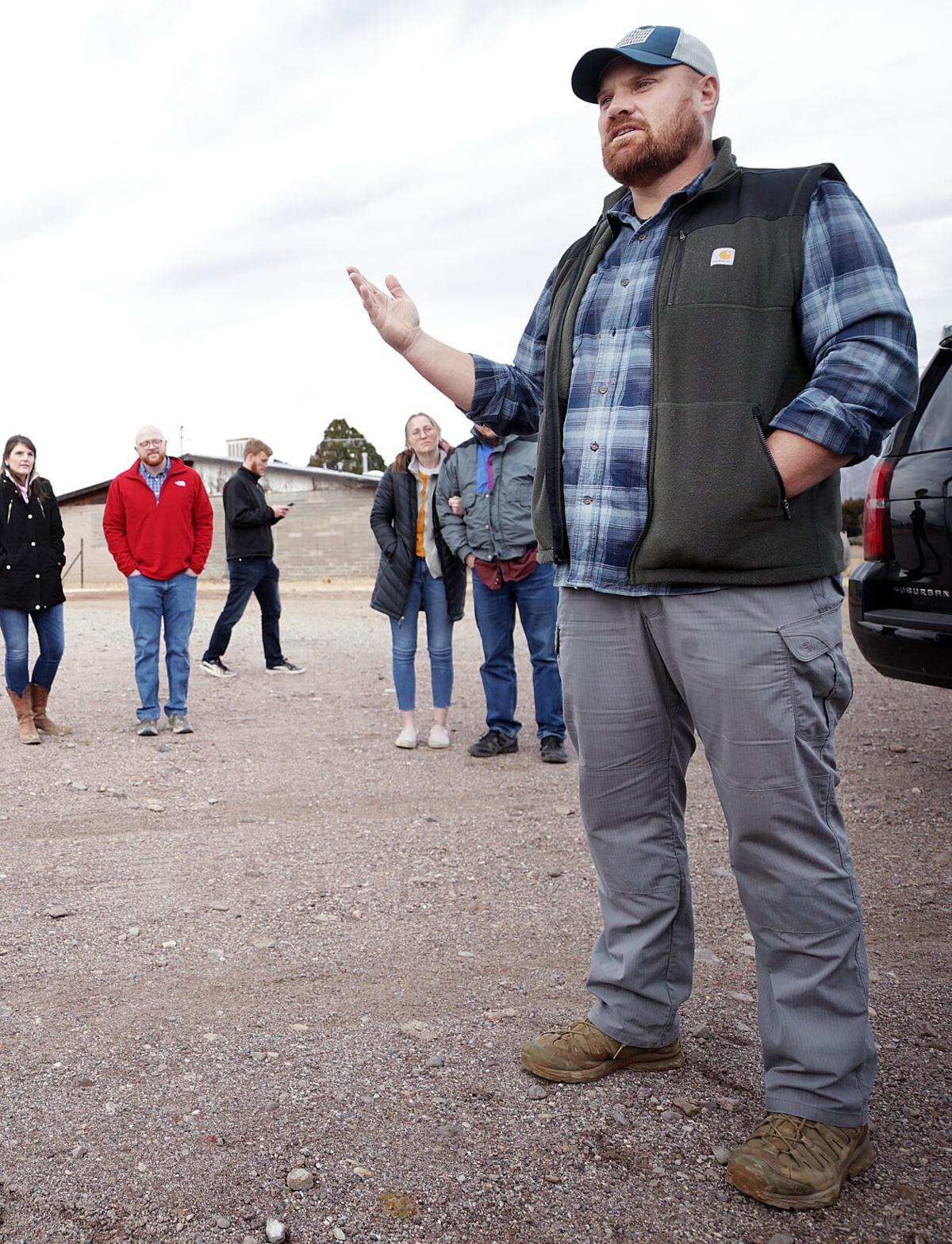 Out-of-state politicians view the southern border fence Friday as they receive a tour of the area where human smuggling is proliferating in and around the Sierra Vista area.

COCHISE COUNTY — The number of undocumented individuals crossing into Cochise and its neighboring counties has skyrocketed since March, law enforcement officials say, with some months seeing five times as many people coming into the area from Mexico.

The increase in illegal crossings is followed by a spike in human smuggling across the area, as sheriff’s deputies, local police and Border Patrol agents attempt to capture the coyotes — people who smuggles immigrants across the U.S.–Mexico border — who are intent on spiriting their human cargo onto Interstate 10 so they can head north.

Friday morning a group of legislators from Arizona and other states gathered in front of the Sierra Vista Justice Court building for a briefing from Cochise County Sheriff Mark Dannels and Cochise County Attorney Brian McIntyre on how dire the situation has become.

“About every other day there is some kind of smuggling pursuit by local law enforcement or Border Patrol and we have to weigh the community risk versus the apprehension risk,” Dannels told the lawmakers. “It’s tough, it really is.”

“We saw 2,500 (illegal crossings) just last month,” Williams said. “Since March of last year we’ve seen a drastic number of illegal aliens coming across, where we had seen a couple of hundred a month (grow) to a couple of thousand a month. That’s in Cochise County and a couple of counties over.”

Williams wonders if the advent of the coronavirus in March sparked the mass exodus of undocumented persons into Arizona.

“Do they feel we have better medical over here?” Williams said. “The Border Patrol has also been saying that a lot of them believe our borders are now open. This has been going on right when COVID-19 hit. You can pinpoint it to March of last year when we just started seeing the numbers drastically increasing.”

McIntyre highlighted two recent events in which coyotes carrying several undocumented people in their vehicles attempting to race onto I-10 ended up in fatal and near-fatal crashes.

The fatal wreck occurred in the Bisbee traffic circle in early January after authorities tried to stop the driver of a rented Ford pickup who had eight undocumented people in his vehicle. The driver, William Brown of Mesa, was driving at speeds often exceeding 100 mph on State Route 80, police reports show. Investigators said Brown had retrieved his human cargo in Douglas and was heading toward Bisbee.

Brown was being followed by Bisbee police and other law enforcement officers when he failed to maneuver the sharp turn to get onto the traffic circle, police said. His truck flipped over and at least two of his passengers were ejected from the truck and killed at the scene, police said. A third person was taken to a Tucson hospital and the others were treated at Copper Queen Community Hospital in Bisbee.

On Tuesday night, a 16-year-old boy carrying several undocumented people in his truck tried to turn onto I-10 near Benson driving at what McIntyre called “Andretti speed,” and crashed into another motorist. The other driver and his passenger were injured, as were the undocumented people riding with the teenager, McIntyre said.

Brown is facing two counts of first degree murder; the 16-year-old will be tried as an adult, McIntyre said.

The county attorney said about one-fourth of his roughly $4 million budget is used to deal with border-related crime.

Michael Hyatt, the agent in charge at the Brian A. Terry Border Patrol Station near Bisbee, said that human smuggling involves more than just people walking across the border into the United States.

“Inside that human smuggling is a lot of child exploitation, sex trafficking and indentured servitude,” Hyatt said. “A lot of these people can’t pay their debt (to the coyote) and they have to work to pay it off. Some of them never do.”

Before Williams and Hyatt led the legislators to the border where construction on a section of wall has stopped, he drove them through Palominas Road, a rural corridor dotted with ranches that connects with State Route 92. Williams explained that Palominas, Hereford and Moson roads are a favored route for coyotes to race through with their smuggled humans on the way to I-10.

After the drive, the group slid into a parking lot in front of the Morning Star Cafe on SR 92.

Williams explained that just across the street at the Palominas Elementary School, there is a “load off” point where many coyotes pick up illegals who have crossed the border and make it to SR 92 undetected.

“From this point here on Highway 92 we’re only about three miles from the border and this is one of the biggest smuggling corridors that’s happening right now, right through the San Pedro River Valley,” Williams said.