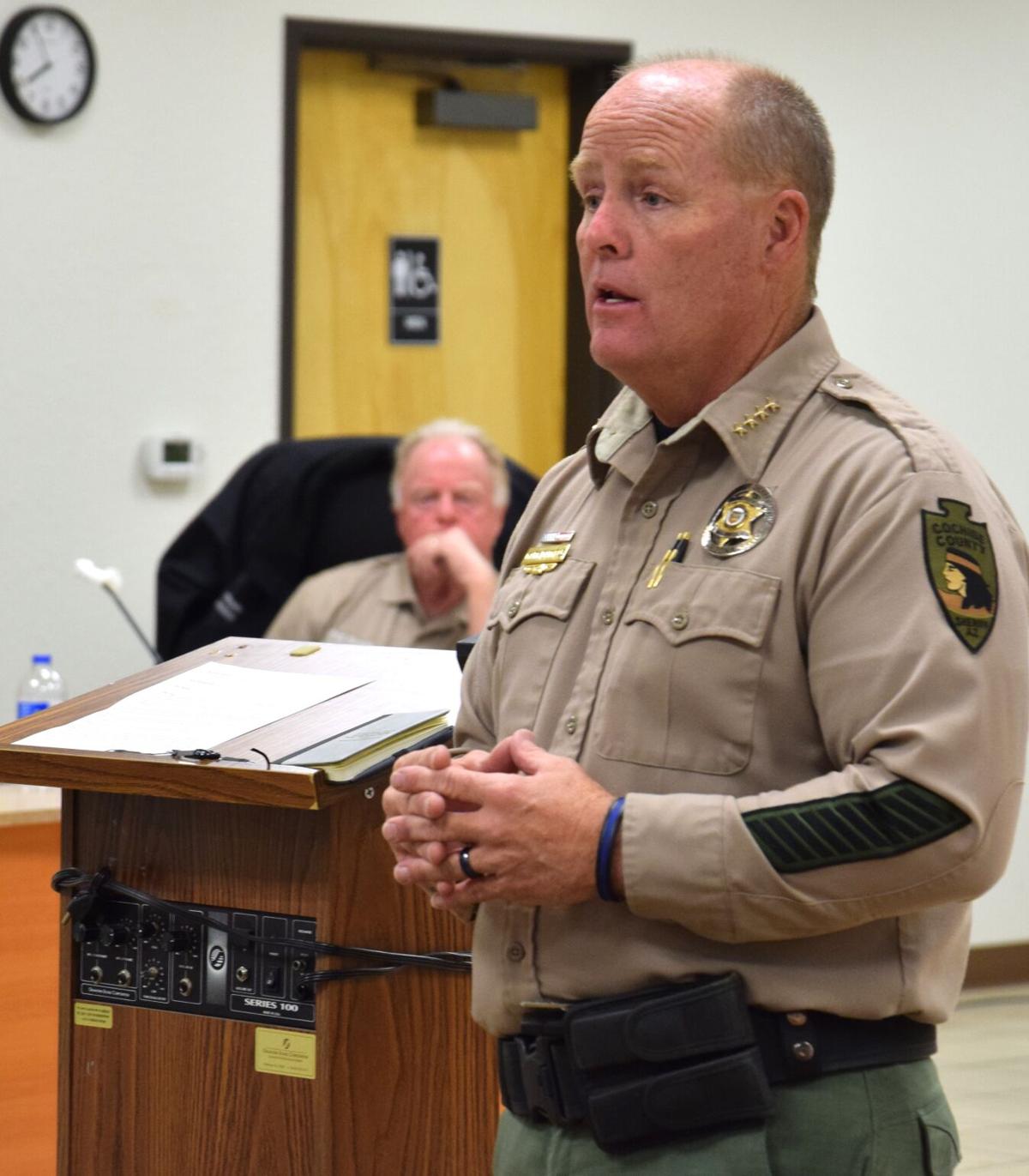 Cochise County Sheriff Mark Dannels addressed a large crowd at the Benson City Council meeting Monday evening, where he spoke about the influx of undocumented migrants crossing into the country and new immigration policies. 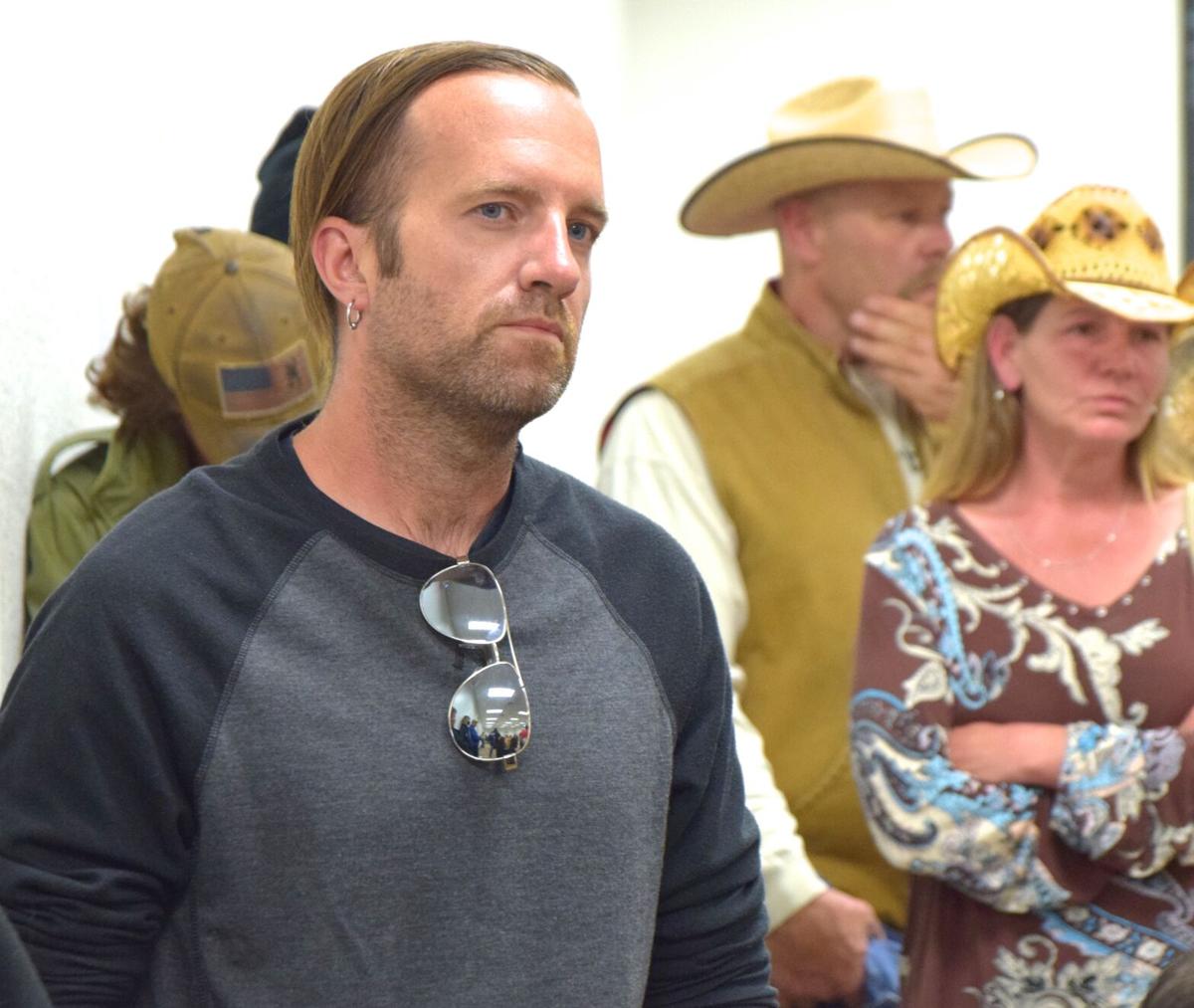 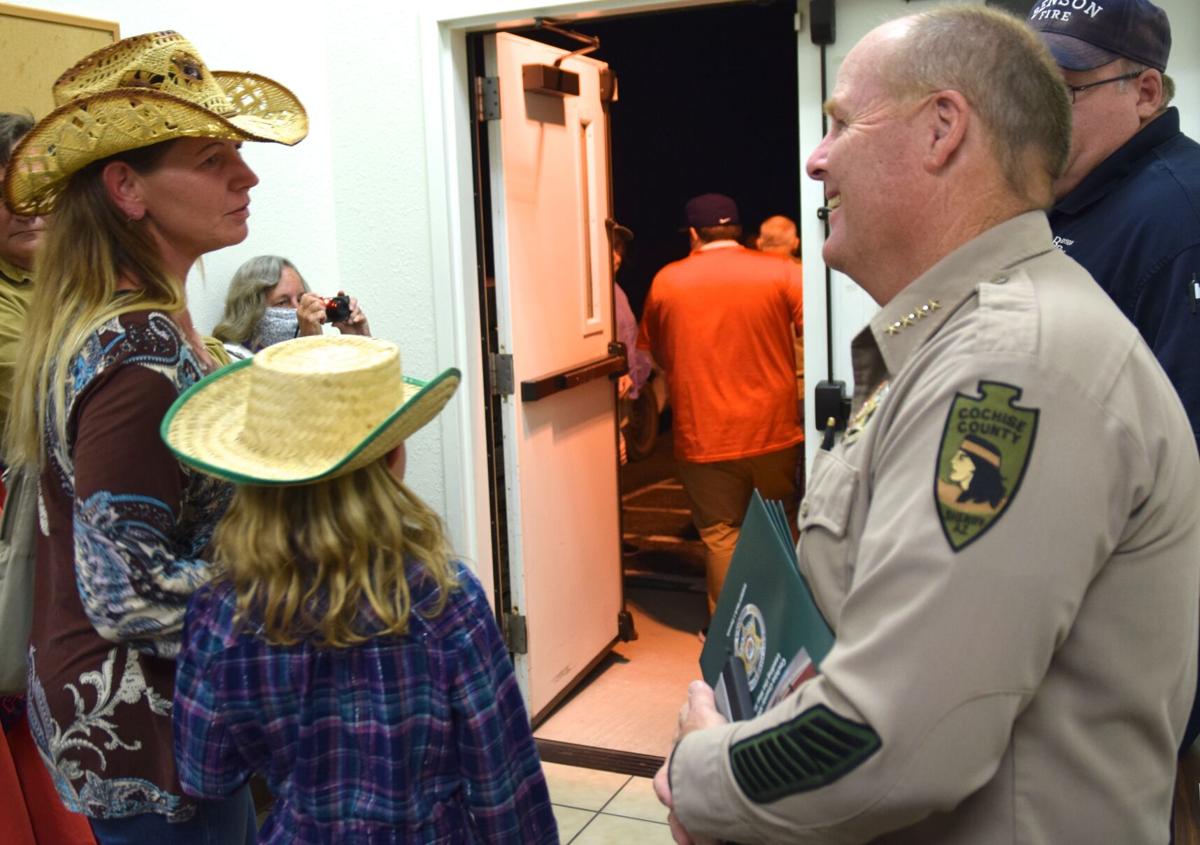 Cochise County Sheriff Mark Dannels addressed a large crowd at the Benson City Council meeting Monday evening, where he spoke about the influx of undocumented migrants crossing into the country and new immigration policies.

Dannels provided statistics about the influx of undocumented immigrants on the southern border, to include a surge in the number of unaccompanied children pouring into the country, as well as increases in human and drug trafficking. Describing the situation as a “border crisis,” Dannels expressed serious concerns about potential impacts the current immigration situation will have on already strained border communities.

The immigration discussion started with Benson Mayor Joe Konrad, who read a letter drafted by Willcox City Manager Caleb Blaschke. The letter, which bears the signatures of Cochise County mayors Konrad, David Smith of Bisbee, Donald Huish of Douglas, Rick Mueller of Sierra Vista and Michael Laws of Willcox, is being sent to representatives at the federal level, Konrad said.

With concerns about the number of undocumented immigrants overwhelming border communities, the letter urges the federal government to establish policies and funding to transport undocumented immigrants to predetermined locations where there are resources in place to support them. It also questions why the government chose to enact an immigration policy with no local input, “thereby placing a detrimental burden on small, rural communities in Cochise County” where such resources are not available.

Konrad is urging residents to reach out to elected officials with concerns about the border situation and the health and safety impacts that come with releasing undocumented immigrants into communities, especially during a global pandemic.

Dannels opened his immigration discussion by providing statistics from the first nine months of 2019, a time when human and drug trafficking were a huge problem along the border. During that time, 3,500 children were exploited by drug cartels in the Yuma sector alone, he said. Children were being used by the cartel as they came across the border with adults.

“These kids were taken by the U.S. government and protected,” Dannels said. “That’s not being put out there, but they were protected.”

Also, during that time, 16,000 violent criminals were detected on the border. Over 1,000 gang members representing 20 countries breached the Southwest border, and there were 822 assaults on federal agents.

Once tougher border security was in place, those numbers started improving in late 2019 through 2020.

However, under the new administration, Dannels said the southwestern borders have gone from “a manageable calm” to “unmanageable chaos and crisis.”

As president of the Arizona Sheriffs Association, Dannels said he and Arizona’s border sheriffs are pushing for policies from Washington, D.C. to “discourage rather than incentivize undocumented immigration.”

Dannels said when it comes to securing the border, sheriffs are focused on three primary objectives:

Public safety, with concerns on the violence associated with drug trafficking that impacts both sides of the border;

National security, the need to secure the border to protect the country from foreign terrorists;

Human rights, lack of border security serves as an incentive for undocumented immigration, which leads to migrant deaths.

Politics, Dannels said, have gotten in the way of “thoughtful discourse” when it comes to these three objectives. Arizona’s border sheriffs are not interested in politics.

“We need solutions, not politics.”

With a record number of undocumented people swarming the border, the Tucson sector, which includes Cochise County, is the second busiest region on the Southwest border, Dannels said. The Rio Grande sector in Texas is the busiest region.

“When President Biden came into office, the first thing he did was declare the southwestern border a non-emergency. By doing that, he not only stopped the physical barrier (the border wall), but he also stopped the technology, lighting and resources on the Southwest border.”

Places where drug cartels were forced to climb mountains to come across the border are now walking paths that are wide enough to drive cars through, Dannels said.

“I was on the Biden transition team for the National Sheriffs Association, and we talked about what is working, the collective efforts, the collaboration, the technology and how we were doing good things.”

That optimism was short-lived.

Since that meeting, Cochise County has lost three checkpoints as well as an aerostat.

In Cochise County there is a virtual system of 1,000 cameras that extend all the way to the California state line and into New Mexico, monitoring 14 different paths, Dannels said. From 2017 to current time, the county has had a 100 percent conviction rate on drug smugglers in Cochise County because of the cameras.

The sophisticated camera system is placed along known migrant routes across the border and is capable of detecting illegal activity.

“It’s a great system because we’re able to see in real time what is going on in Cochise County,” Dannels said.

“We went for 20 months in Cochise County with no drug smuggling because of our camera system that was working,” Dannels said. “Last year at this time we ran between three and four hundred photos a month. We watch our cameras 24-7.”

Dannels said when the political rhetoric kicked up in August, the cameras detected 1,200 images of illegal entries. In December the number jumped to 2,500 illegal entries, along with 500 pounds of illicit drugs that were seized.

“We’re hitting record numbers again, like we saw in 2019,” Dannels said. “So, we’ve been blended into the surge.

“Just in the past few months, drug trafficking in Cochise County has been climbing.”

The challenges on the border are further complicated by the COVID-19 pandemic, Dannels said.

“Undocumented immigrants are not being tested when they cross into the country, creating health concerns for border communities.”

Describing the immigration crisis as a federal leadership issue that needs to be addressed, Dannels is urging residents to reach out to their representatives and be heard.

“As members of border law enforcement, we are concerned by the lack of engagement by the current administration,” Dannels said in an article that he co-wrote with Chief Mark D. Napier of the Cochise County Sheriff’s Office. “Politics only serve to exacerbate the conditions we face. We need more resources directed to border sheriffs. An investment here benefits public safety on a national level.”

About 80 people filled the council chambers Monday to hear what Dannels had to say about the border situation in Cochise County.