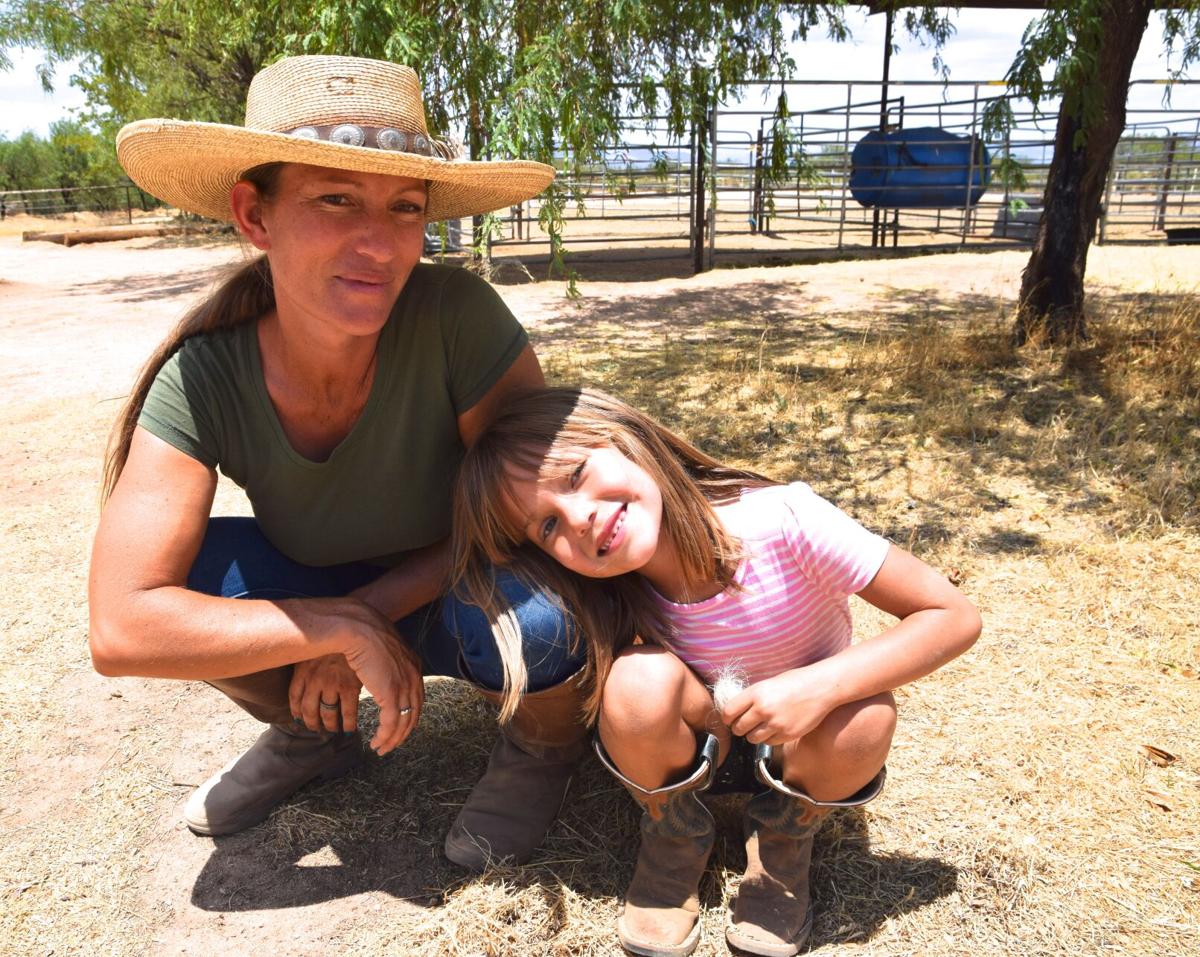 J-6 Equestrian Center head horse trainer Samantha Jepson and her 6-year-old daughter Mina take time out of their busy schedule after giving a tour of the boarding stable last Thursday. 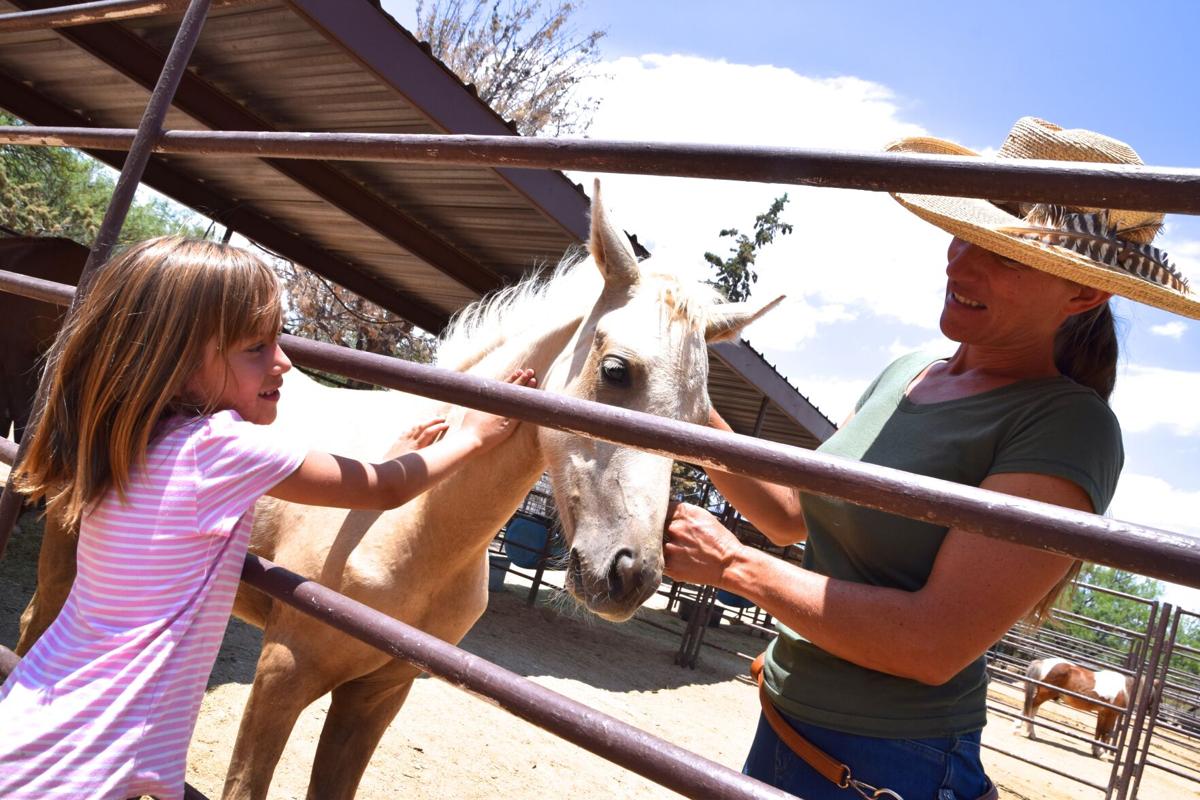 Mina Jepson, 6, and her mother, Samantha, visit Luna, a friendly 3-month-old filly that lives on the J-6 Equestrian Center property. 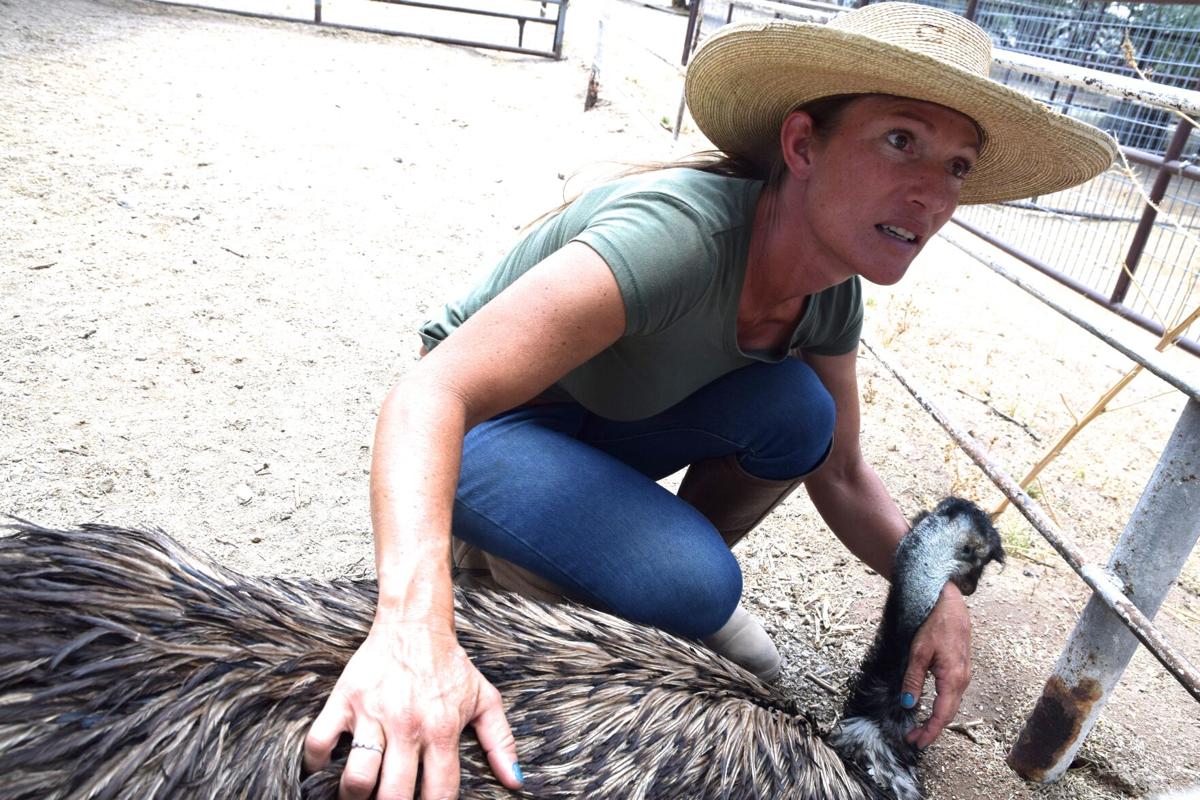 While giving a tour of J-6 Equestrian Center, Samantha Jepson pauses to talk about Shallie the emu, one of the boarding stable's only non-equine residents. 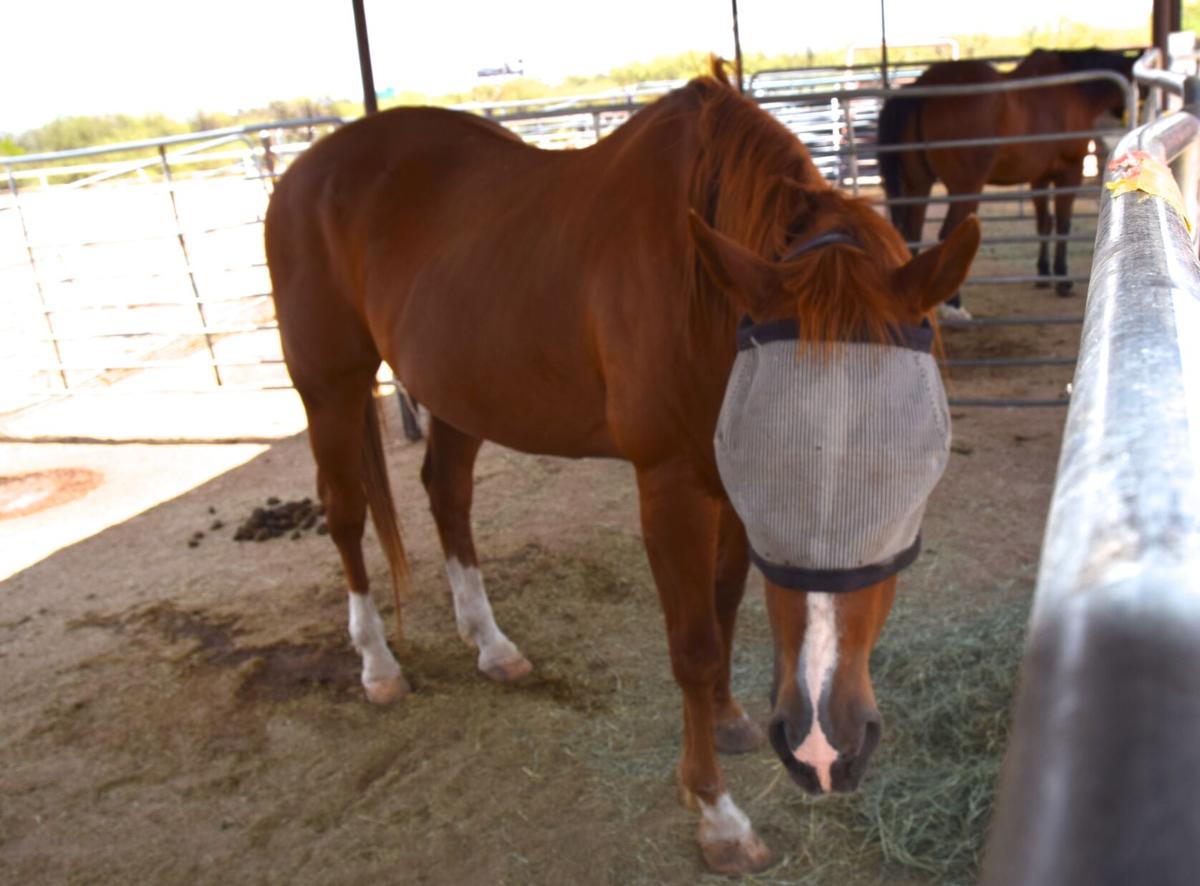 New arrivals at the J-6 Equestrian Center are kept in this quarantine area for one week before they're moved to the general equine population.

J-6 Equestrian Center head horse trainer Samantha Jepson and her 6-year-old daughter Mina take time out of their busy schedule after giving a tour of the boarding stable last Thursday.

Mina Jepson, 6, and her mother, Samantha, visit Luna, a friendly 3-month-old filly that lives on the J-6 Equestrian Center property.

While giving a tour of J-6 Equestrian Center, Samantha Jepson pauses to talk about Shallie the emu, one of the boarding stable's only non-equine residents.

New arrivals at the J-6 Equestrian Center are kept in this quarantine area for one week before they're moved to the general equine population.

BENSON — When the Walnut Fire threatened properties near Dragoon last week, members of the equestrian community offered to house evacuated horses and other livestock if relocations were needed.

J-6 Equestrian Center, located off Interstate 10 in Benson’s J-6/Mescal area, was quick to welcome displaced animals for those who were faced with evacuation.

The equestrian center owner, Katherine Lowry, is known for her willingness to open the boarding facility to livestock when wildfires are a concern. Fortunately, Walnut Fire stopped posing a threat to properties in the area, so it was not necessary for J-6 to accommodate temporary residents.

“Offering our facility during evacuations is important to us for two reasons,” Lowry said. “First, we want to return the favor to a community that has supported us in times of fire. Two years ago, we had to move more than 40 horses from our property when a wildfire was getting close to us.”

Lowry said she chose to move animals from the boarding stable while in pre-evacuation mode because of the large number of animals that needed to be relocated.

“By moving quickly, it brings peace of mind to owners and allows them to focus on their own households, should they be required to evacuate,” she said. “When you’re moving horses or any livestock, it’s best to start as early as possible to allow enough time for a well-organized relocation.”

Secondly, Lowry said fire season is always a tense time for horse and livestock owners. She advises having a wildfire emergency response plan in place to help the evacuation process go as smoothly as possible.

“Have a plan and begin to enact that plan as early as possible when threatened by a fire,” she said. “First and foremost, make sure your animals know how to load and that you have access to a trailer.”

For livestock owners who do not have trailers, Lowry said there are a number of “amazing individuals” in communities who offer their time and trailer space to help relocate horses and other livestock.

“Know where you want to take your animals and get them moved before an approaching fire gets too close,” Lowry said. “It’s best to have this arranged ahead of time.”

County fairgrounds also house animals in need of a temporary place to stay.

“Give the facility all pertinent contact and veterinary information,” Jepson said. “For animals on medication, have a week’s supply of medication with instructions in a ‘to go’ bag and if possible try to bring hay for your animals.”

Currently there are about 35 horses housed at J-6, with room for 25 more, Jepson said while giving a tour of the facility.

“If there’s a fire emergency, we could feasibly make room for even more,” she added. “In cases of evacuation, we have several temporary panels that are very easy to set up that we can use. We also have round pens, pasture areas and an arena. This is a large property with plenty of space to accommodate more animals if necessary.”

While J-6 is willing to accept all livestock, Jepson said the facility is best equipped to house large livestock such as horses and cattle.

“The small stock is actually harder for us because our panels have large gaps that are better suited for large animals,” she added. “But if necessary, we can make accommodations for small stock like goats and sheep.”

Evacuated animals that arrive at J-6 will be housed in a special quarantine area that is used for new horses before they’re moved into the general population. Horses are typically quarantined for one week.

“Because we’re a boarding facility, we’re designed to handle a high volume of animals,” Jepson said. “One of the nice things about large boarding stables like this is there’s always hay on hand.”

When horses were moved from J-6 during the fire two years ago, some were taken to private homes that did not have an adequate supply of hay to accommodate an overload of short-term residents. In those cases, J-6 provided hay for the relocated evacuees, Jepson said.

“So when you come to a large boarding stable, you know that they’re going to have a couple semis of hay on the property,” she said. “There’s plenty of food available for all the animals. By using large boarding facilities, you’re not going to have to worry about evacuating your dogs, cats, chickens and horses and then racing out to get hay from the feedstore to feed them.”

Jepson said that J-6 requests $10 a day per horse to cover stall cleaning and the cost of hay.

“If we have evacuees who can’t afford the cost, then we ask for donations from people who can afford to help the other people out. We’ve also set up a GoFundMe for fire evacuees.”

If owners come with their own hay, or are willing to clean their own stalls, Jepson said the cost is adjusted accordingly.

“When we evacuated out of this facility two years ago, horses were dispersed all over the area,” Jepson said. “About half of our horses went to a boarding stable in Tucson, a third went to Willcox and the rest went to private properties.”

When livestock evacuations are imminent, Lowry and Jepson are quick to praise communities for their support and response.

“Evacuations are obviously a very stressful time for the people who have to relocate,” Lowry said. “Knowing there are resources available to help and volunteers that are willing to assist with relocations is reassuring. It’s all about people and communities coming together.”

Fire season in Arizona typically runs from May through mid-July. Authorities are battling multiple fires throughout the state, with experts predicting the 2021 fire season as possibly one of the worst in a decade.