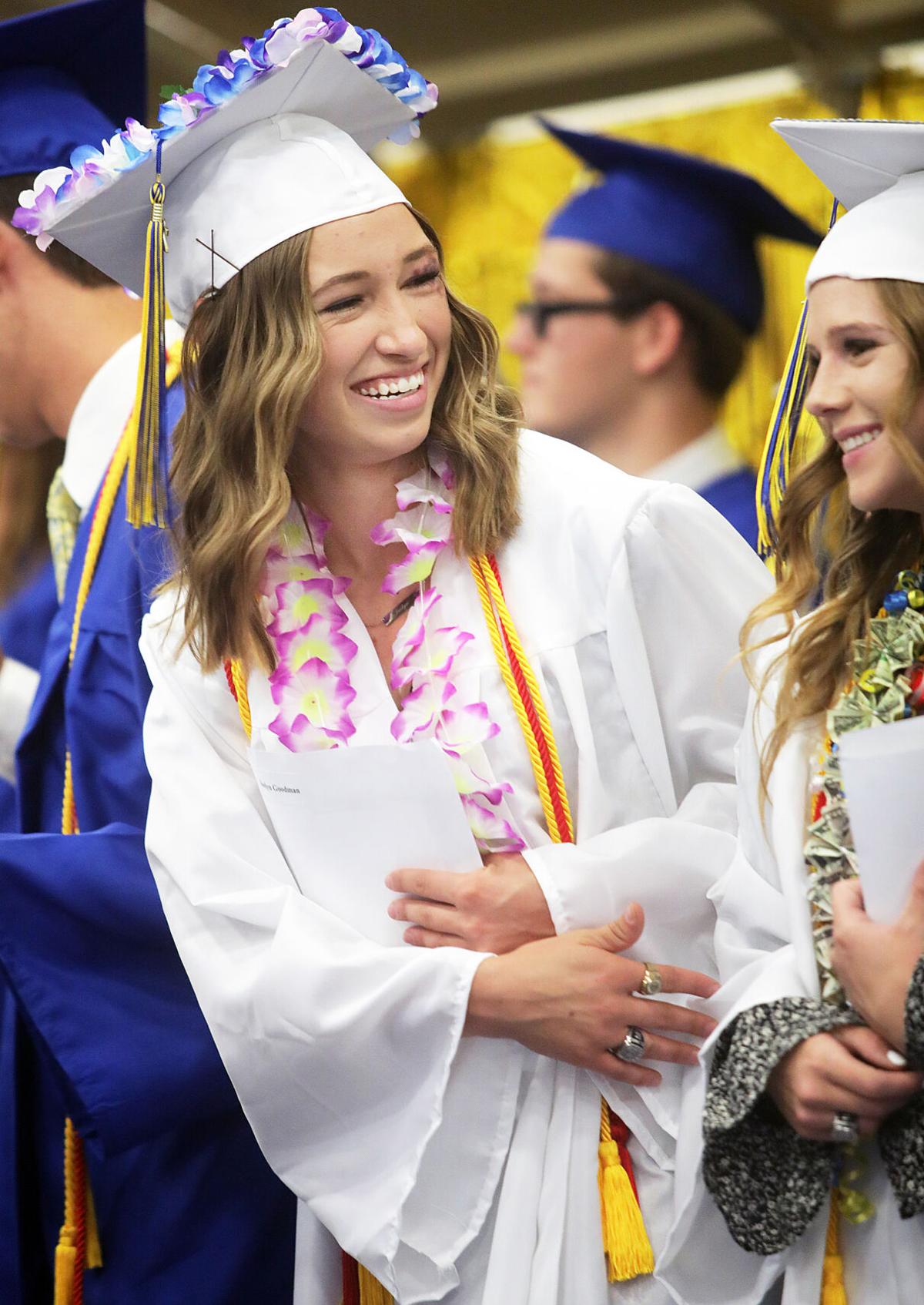 St. David seniors Jaelyn Goodman, left, and Brylee Murry are all smiles after receiving their diplomas. 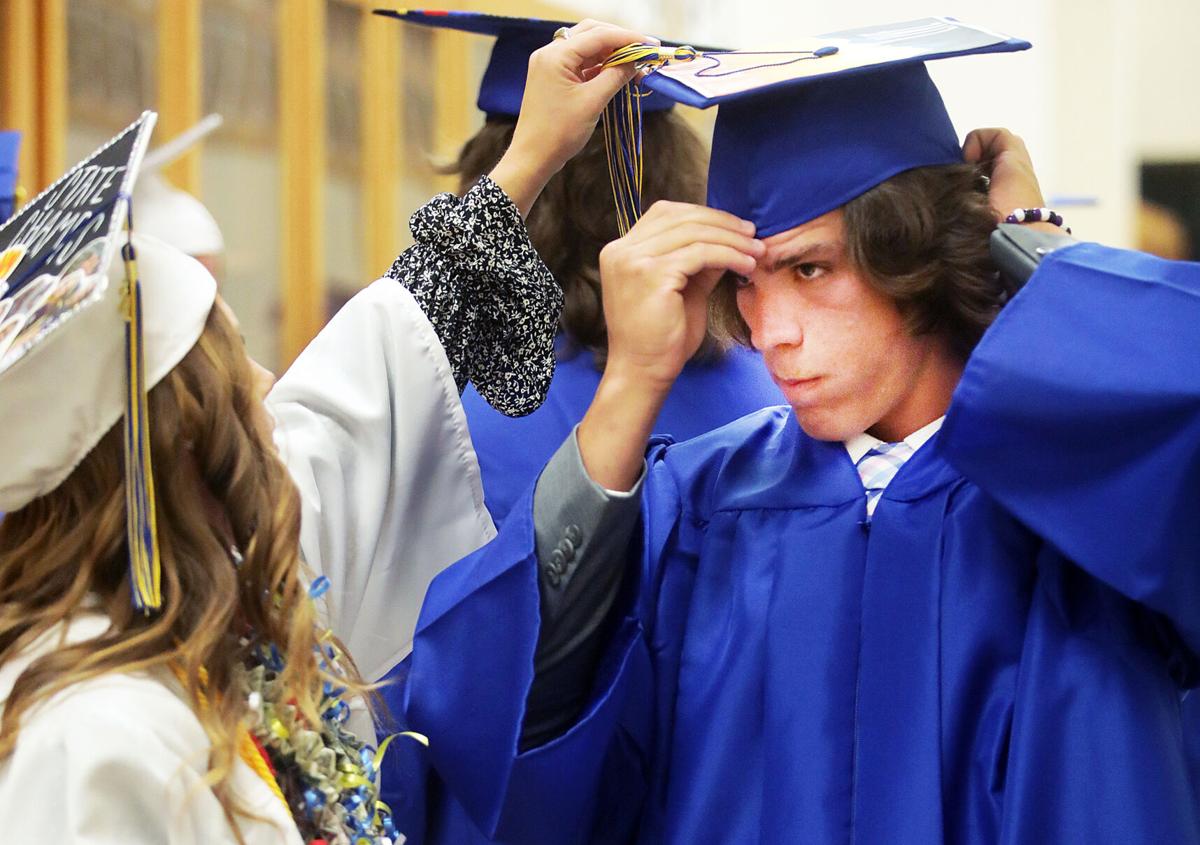 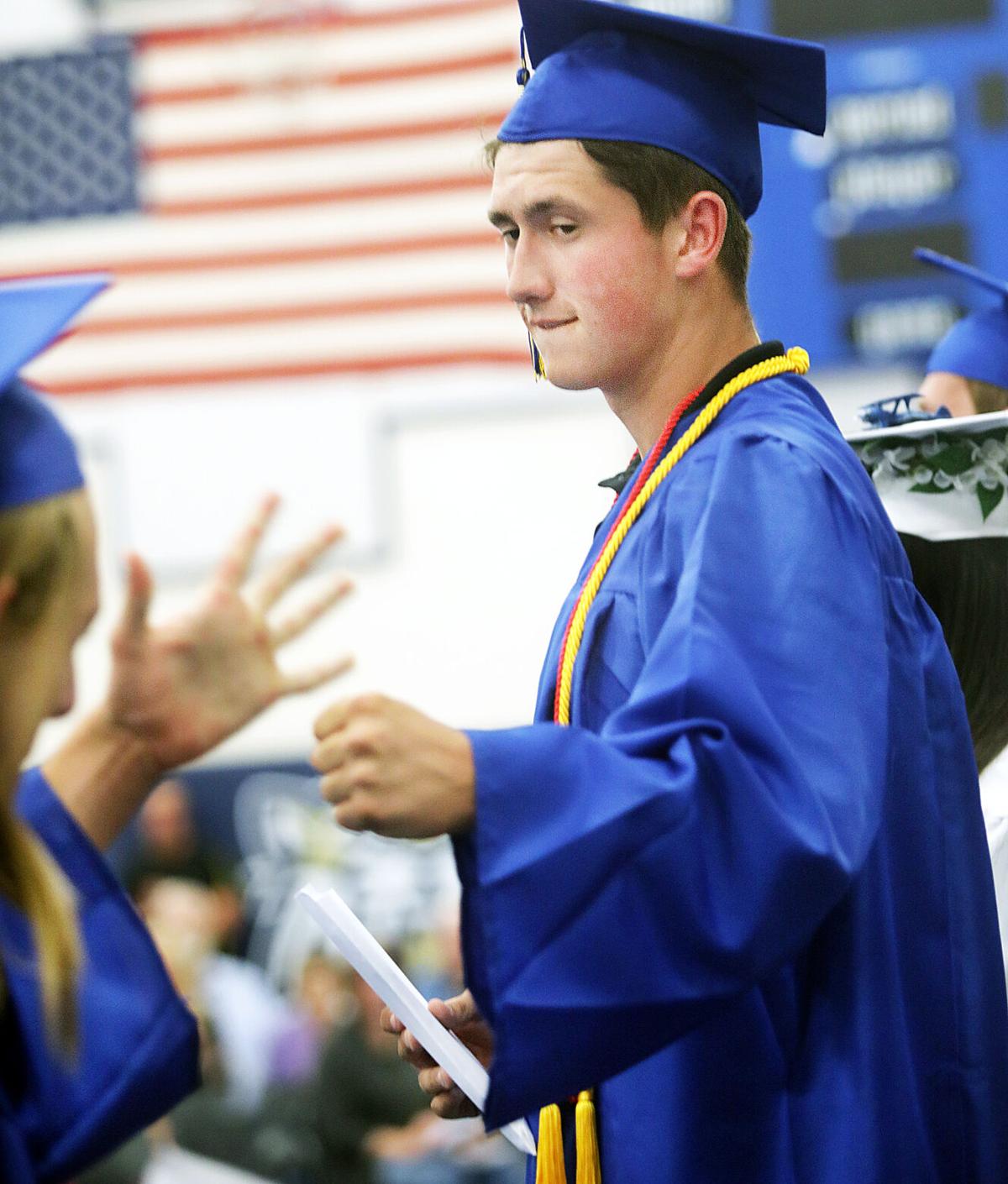 St. David graduate Kason Jacquez congratulates a classmate after getting his diploma. 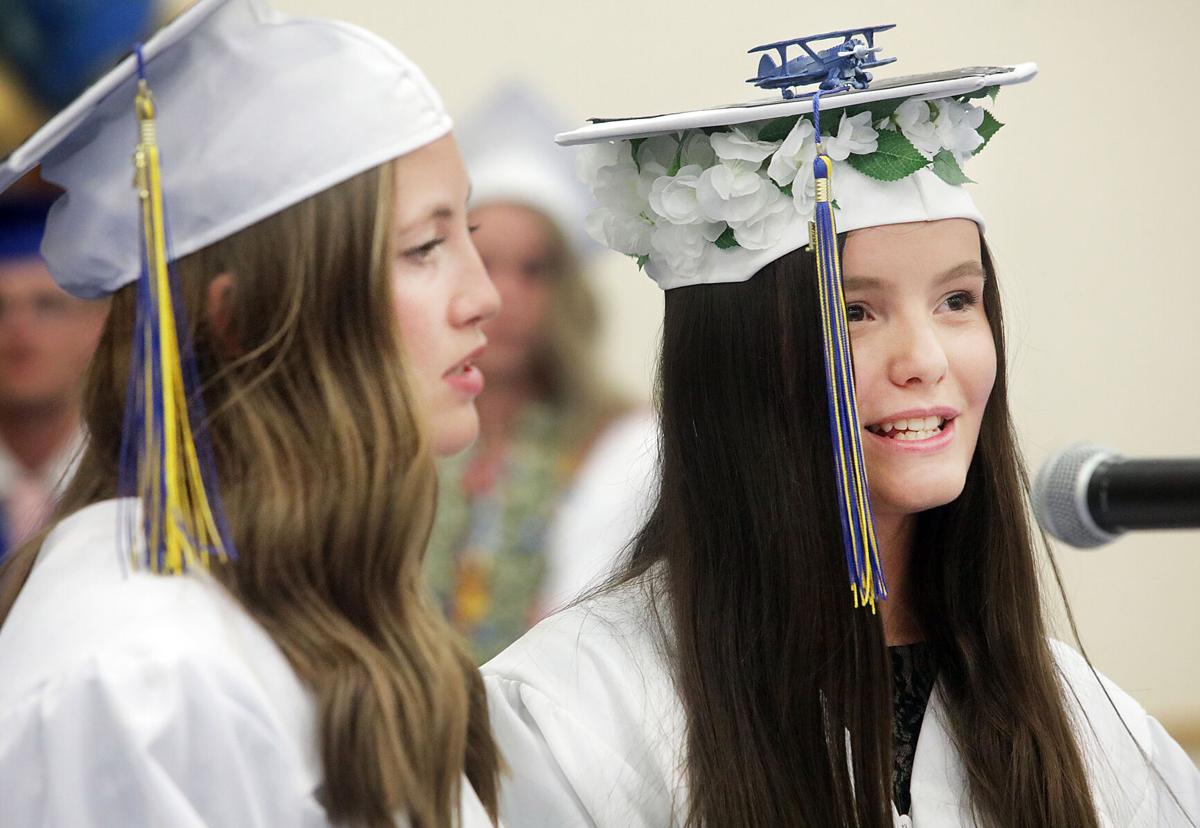 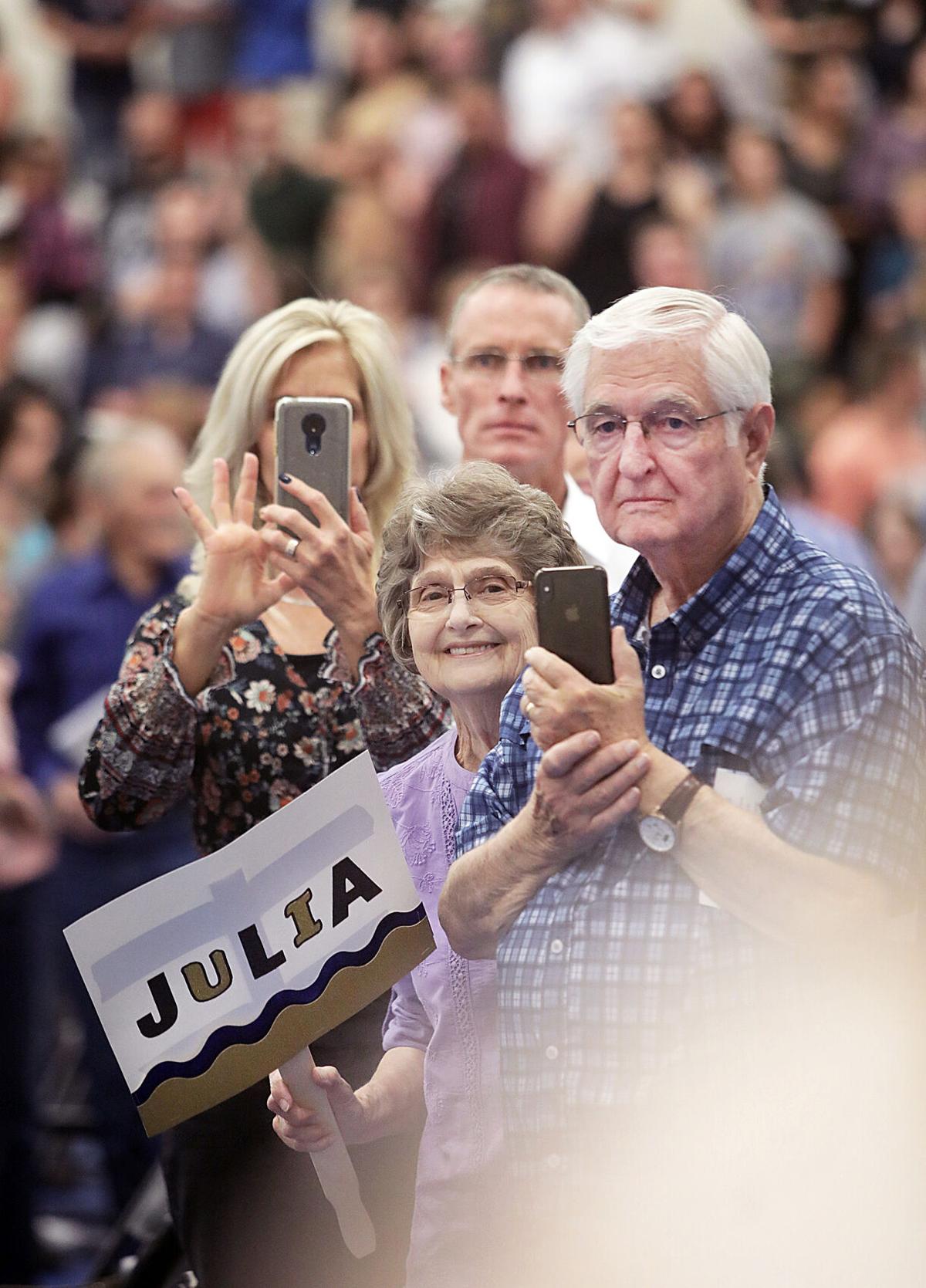 The St. David gymnasium was packed with family and friends as they cheered on their graduates.

St. David seniors Jaelyn Goodman, left, and Brylee Murry are all smiles after receiving their diplomas.

St. David graduate Kason Jacquez congratulates a classmate after getting his diploma.

The St. David gymnasium was packed with family and friends as they cheered on their graduates.

ST. DAVID — When St. David High School valedictorian Julia Dahl addressed her 2021 graduating class, she touched on some of the tough challenges brought by COVID.

Dahl also spoke of how the class rose to those challenges and experienced successes while learning the importance of resilience.

“I think I speak for the whole class when I say that this was not the senior year I envisioned,” she said. “The pandemic has been hard for everyone, some more than others.”

Dahl congratulated her classmates for a year of accomplishments, despite the struggles of adapting to what she described as” a rapidly changing world.”

“I am honored to graduate with the St. David class of 2021,” she said in her closing remarks. “As we face our futures with courage, we will do truly amazing and wonderful things. Go and get ‘em Tigers!”

St. David High School graduated 34 students, of which 30 walked with their class Thursday evening before a packed gymnasium of cheering family and friends.

Five received highest distinction honors by graduating with a grade point average of 4.0 or above, while 13 students graduated with distinction, or in the 3.5 to 3.99 range. Seven students were in the superior category, with grade point averages between 3.0 to 3.49, said Barbie Grapp, the school’s academic counselor.

“This is an amazing class,” Grapp said. “These students worked hard and did well even with all the challenges of distance learning. I’m really proud of them.”

Salutatorian Claire Daley has been a proud St. David Tiger since preschool. In her speech she spoke of how she has attended school with some of her classmates since kindergarten.

“Tonight we will throw our caps in the air and say goodbye to our school,” she said. “Some of my fondest memories happened on this campus. I’ve had so many opportunities here that I would not have had at any other school,” Daley said while reflecting back on close friends, encouraging teachers and memorable experiences.

In addition to academic achievements, Weisling pointed to an athletically talented group of students.

With the girls in white caps and gowns and the guys in blue, the graduates accepted their diplomas as school board member Katie Miller read how the graduates planned to prepare for the next chapter of their lives. Several are enrolled in college, a few enlisted in the military, some are serving missions with their church, while others will be entering into the workforce.

Jane McWhorter, a 1978 St. David High School graduate and proud grandmother of 2021 graduate Shealyn Hatch, spoke of how proud she is.

“Shealyn was born profoundly deaf, but has been enrolled in mainstream classes throughout school,” she said of her granddaughter, who graduated with distinction and as a National Honor Society member.

“She has done an amazing job in school and I’m so proud of her.”

Robby, who graduated with distinction, plans to serve a two-year mission for his church and will pursue a career in physical therapy upon his return.

“I’m a 1996 graduate and Emerson graduated in 1994,” Wendy Gooding said. “I am so happy for all the graduates here tonight. The strong heritage in St. David is something to be proud of.”