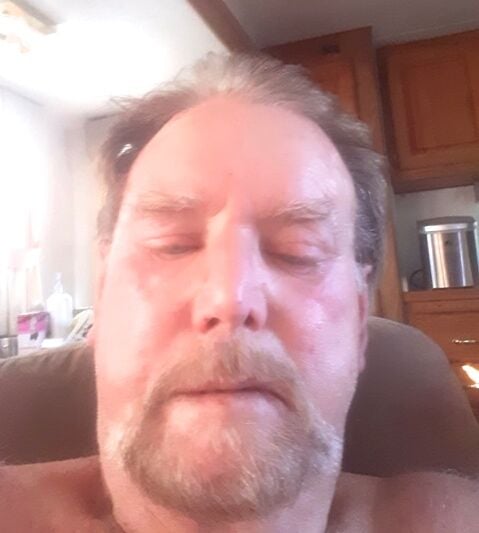 Mescal resident Cary Golden's face is severely swollen following a bee attack at his Mescal home Sunday morning when he received thousands of bee stings. He was taken by helicopter to a Tucson hospital. 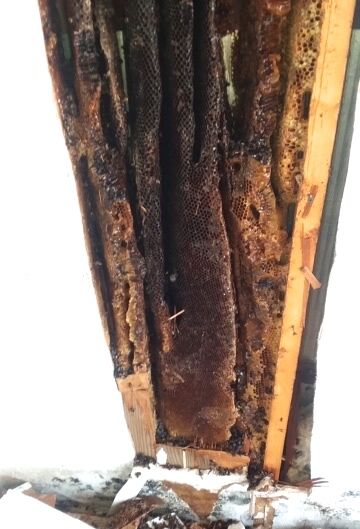 This beehive extended from the floor to ceiling inside the wall of a shed  in Mescal and weighed more than 100 pounds, according to bee expert Pat Harrold, who killed around 200,000 bees that were living in the shed's walls.

Mescal resident Cary Golden's face is severely swollen following a bee attack at his Mescal home Sunday morning when he received thousands of bee stings. He was taken by helicopter to a Tucson hospital.

This beehive extended from the floor to ceiling inside the wall of a shed  in Mescal and weighed more than 100 pounds, according to bee expert Pat Harrold, who killed around 200,000 bees that were living in the shed's walls.

BENSON — Cary Golden, a 69-year-old Mescal resident, says he owes his life to the quick response of Mescal-J6 emergency responders after being attacked by thousands of killer bees.

While out working in an old shed on his property Sunday morning, bees that had been living within the shed’s walls came swarming out of the bottom of the structure and within seconds, thousands of them covered Golden’s face and body with stings.

“I ran into my house and called 911,” Golden said. “Almost immediately, I could tell my throat was swelling closed, my heart was palpitating and my left arm was completely numb. I couldn’t get any air at all. It was like someone was holding a plastic bag over my face,” he told the Herald/Review on Tuesday.

Golden said the 911 operator had him stay on the phone with her until the Mescal-J6 emergency responders arrived. They were on site within two minutes after he placed the call and started treating him.

“They put me on oxygen and started an IV,” Golden said. “They gave me an antidote for the bee stings and I was transported by Benson ambulance to a medical helicopter at the Mescal fire station. Within nine minutes from the time I called 911, I was being loaded into a helicopter and was on my way to University Medical Center in Tucson.”

When he arrived at the hospital emergency room, Golden said four medical personnel started pulling the stingers out of his body with tweezers. They worked on him for two hours.

“I’ve never been in pain like this in my life. I felt like my whole body was covered with burning gasoline. The doctor and medical staff were amazing. I could tell by watching how frantically they were working on me that I was in serious condition. It was very frightening,” he said.

After he was stable, the emergency room doctor told Golden that it was a miracle he survived the attack.

“I got stung all over my face — they stung my eyelids, my lips, inside my ears and nose — my entire face was swollen,” he said.

Golden’s son, who lives in Phoenix, called Pat Harrold, a bee expert out of Pomerene, to go to his father’s property and destroy the bees.

With 50 years experience in the commercial bee business, Harrold said there were thousands of bees behind sheetrock in the shed.

“That hive of bees went from the shed ceiling to the floor, with at least 200,000 bees living in that space,” he said. “The honeycomb weighed at least 100 pounds.”

The beehive, he said, had been there for several years, quietly growing larger, unnoticed.

“When he (Golden) started working on the shed’s wall, it disturbed the bees and they came roaring out of there,” Harrold said. “These are Africanized killer bees. I bet it took five seconds or less for them to completely cover his body.”

“I have one message for everyone out there,” he said. “When you see bees moving in and out of a structure, do not ignore it. Contact somebody that knows what they’re doing and have them removed. These killer bees are evil cross-breds and very dangerous.”

Harrold said he has seen hundreds of bee incidents like this one through the years.

“This man is lucky, lucky, lucky to be alive,” he said. “Based on the number of bees that attacked him, he should have died in the helicopter.”

As for Golden, he credits his survival to the emergency responders.

“I can’t say enough about the Mescal-J6 Fire District and Benson Ambulance,” he said. “The ER doctor said my stars were lined up perfectly, and it just wasn’t my time.”