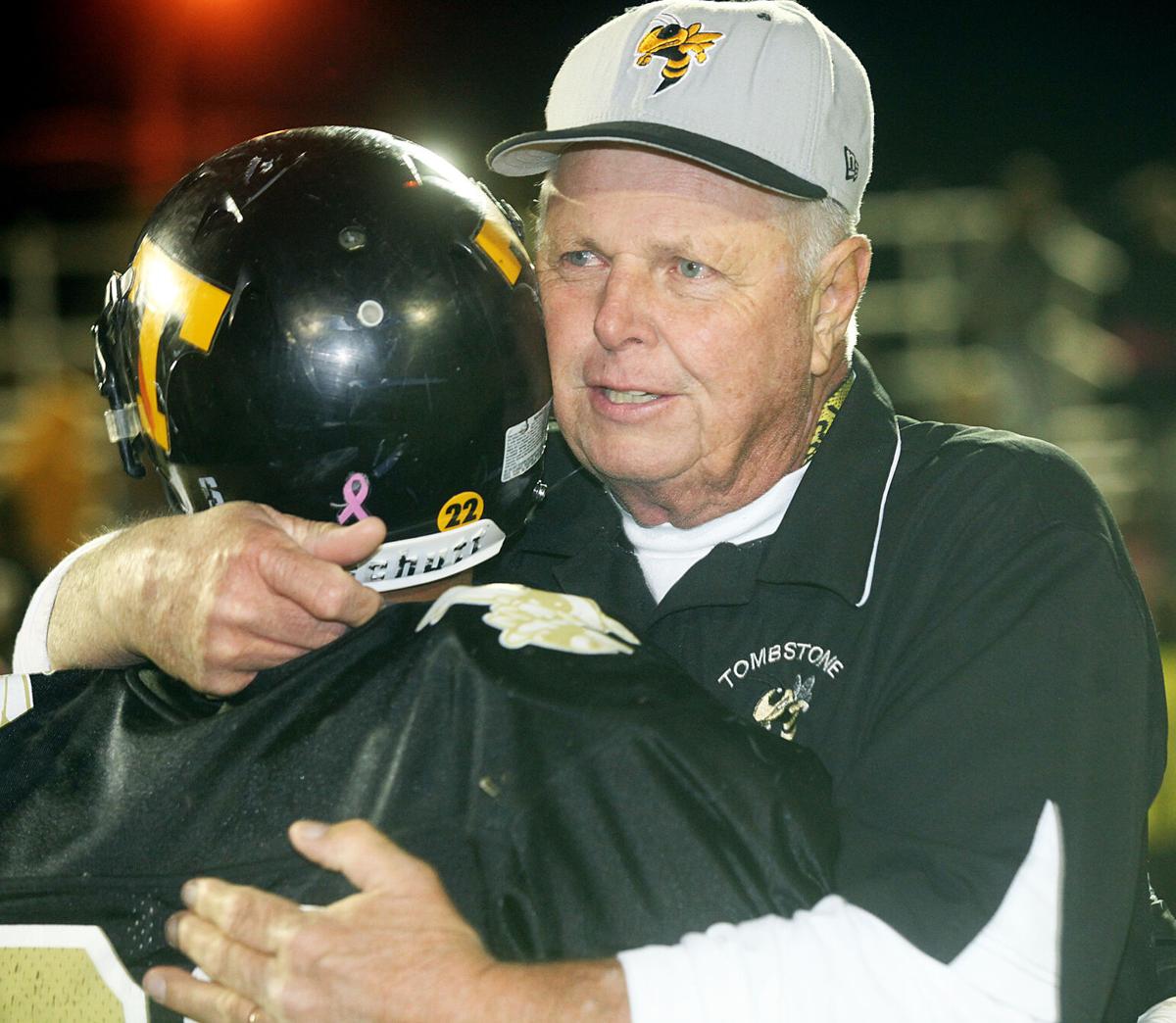 Tombstone High School football coach Mike Hayhurst had a special relationship with his players. Hayhurst says farewell to one of his players after the final game of the season. He retired after the game in 2011. 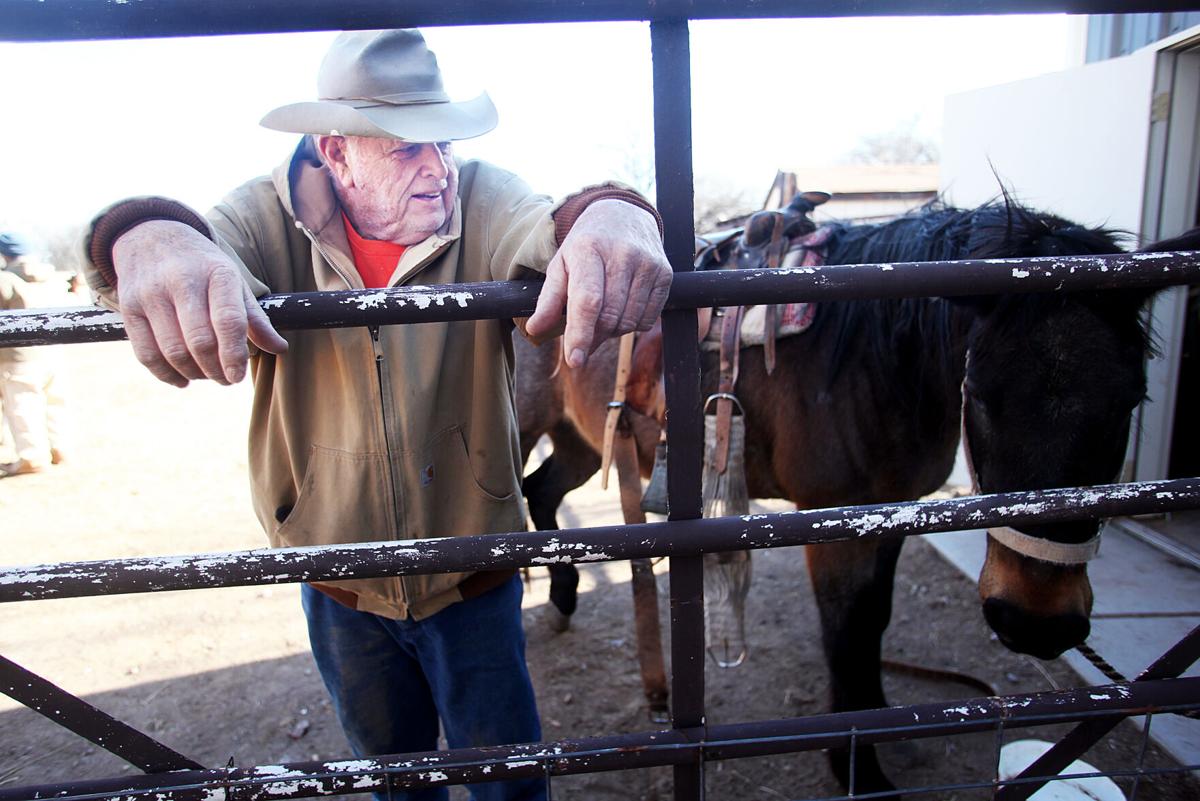 Mike Hayhurst lived on his Whetstone ranch for many years. 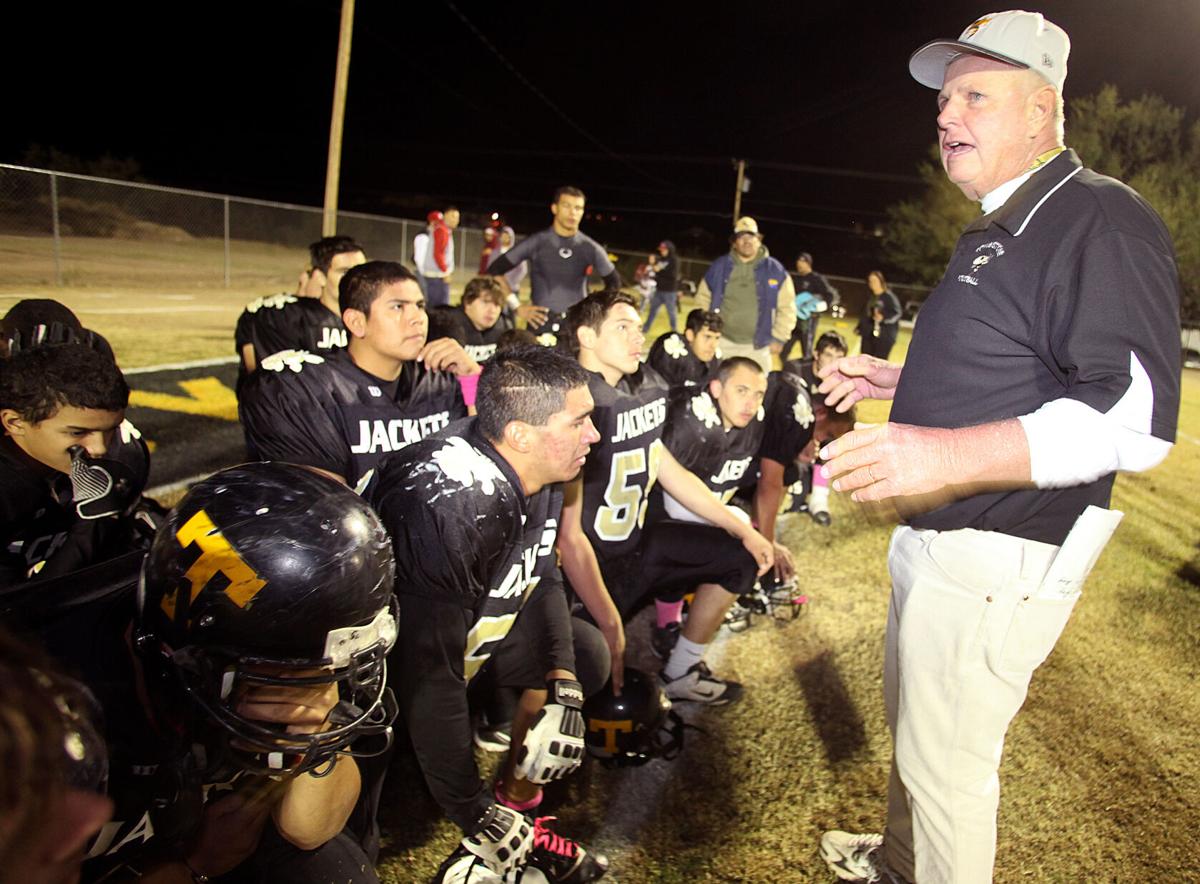 After the final game of the 2011 season, coach Mike Hayhurst had one last talk with his squad. 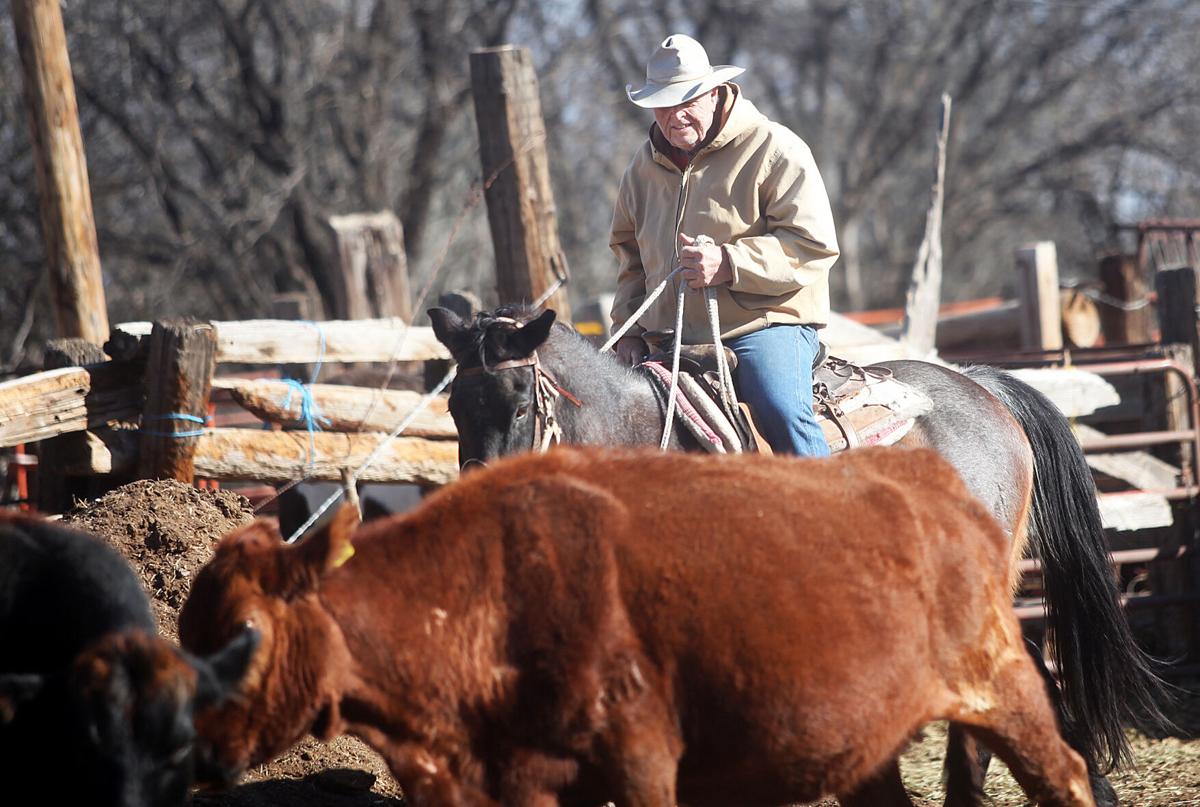 Rancher Mike Hayhurst on his Whetstone property in 2019. 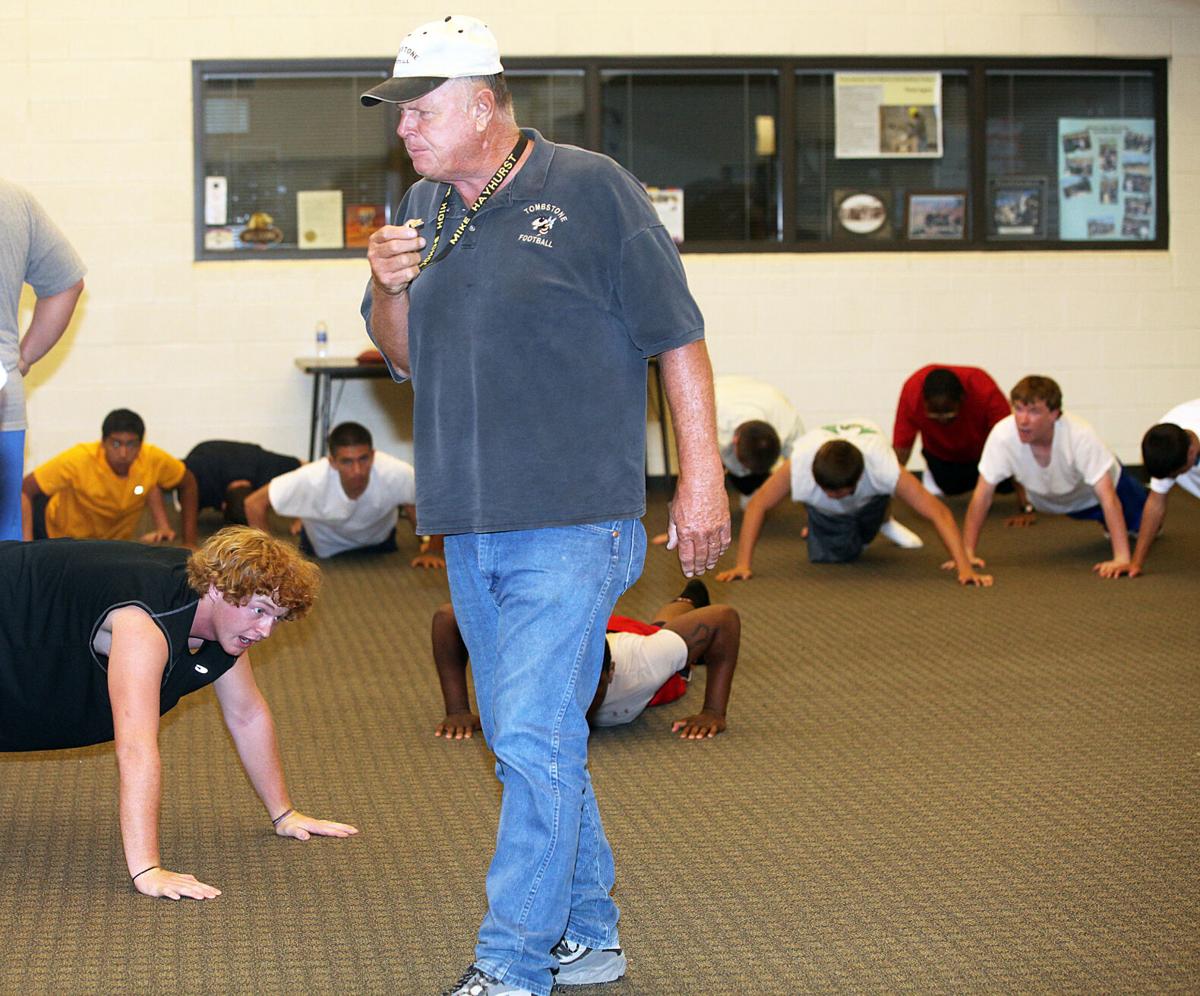 Tombstone High School head football coach Mike Hayhurst trains his players inside prior to the 2010 season. 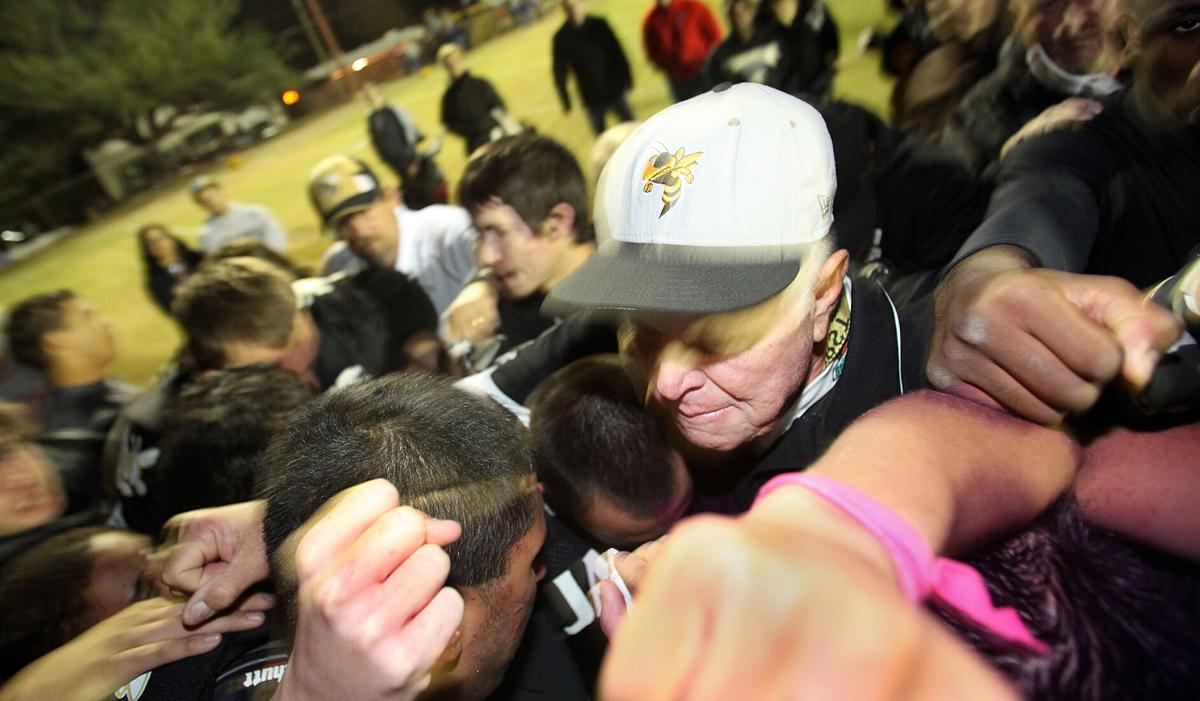 Players bid their coach a fond farewell in 2011.

Tombstone High School football coach Mike Hayhurst had a special relationship with his players. Hayhurst says farewell to one of his players after the final game of the season. He retired after the game in 2011.

Mike Hayhurst lived on his Whetstone ranch for many years.

After the final game of the 2011 season, coach Mike Hayhurst had one last talk with his squad.

Rancher Mike Hayhurst on his Whetstone property in 2019.

Tombstone High School head football coach Mike Hayhurst trains his players inside prior to the 2010 season.

Players bid their coach a fond farewell in 2011.

Jeannie Hayhurst, Mike’s wife of 53 years, said her husband was diagnosed with cancer in October.

With a career that spanned 52 years, Hayhurst coached at Benson, Marana, Casa Grande, Buena and Tombstone high schools, touching hundreds of lives along the way.

Hayhurst also owned and operated a small cattle ranch, served on the Upper San Pedro Partnership, and was a member of the Hereford Natural Resource Conservation District, an organization that promotes environmentally responsible practices.

“I am a product of Coach Hayhurst, as are countless other former players that he influenced in his coaching career,” said Joe Thomas, who is head football coach at Buena High School. “He was far more than a coach. He was a mentor, teacher, father-figure and leader.”

Thomas is a 2002 Tombstone High School graduate who played football under Hayhurst all four years at THS.

“When I came in as a freshman in 1998, it was also Mike’s first year coaching for THS,” Thomas recalled. “During his years there, he became the face of Tombstone’s football program. He was not only a highly respected coach, but instilled life skills in his players. He wanted all of us to be good people, and demonstrated that through his coaching style. I owe my coaching career to Mike Hayhurst.”

After high school graduation, Thomas attended Pima Community College, then Northern Arizona University. He returned to the area from NAU and was hired as Hayhurst’s assistant football coach for five years.

“Mike wanted me to get experience as a head coach, so after five years as his assistant, he resigned in 2011 and recommended me for the coaching position. I coached for Tombstone for three years, then applied for the head coach position at Buena,” said Thomas. “If he had not given me that opportunity at THS, I would not have been hired as Buena’s head coach. He set me up for my coaching position there, and I’ll never forget that.”

After Thomas left Tombstone for Buena in 2015, Hayhurst returned to THS as the school’s head coach through 2018.

“I will be stepping in as head football coach for the 2021 season,” said Bonilla, who worked as an assistant coach at Buena under Thomas during the 2020-21 school year.

“When the opening at Tombstone came up, Joe Thomas encouraged me to apply for the position. So, I applied and was hired. They actually brought me on to work as a paraprofessional a few months ago, and I was able to meet the football players and establish our spring football plan. I’m looking forward to starting the 2021 season.”

Bonilla said he will always remember Hayhurst as a father figure and as someone who advocates for kids.

“He is irreplaceable, an inspiration,” Bonilla said of his former coach. “I played for Coach Hayhurst all four years of high school. My older brother, Michael Bonilla, also attended Tombstone High School and played football there from 2006 to 2009. All of us loved Coach Hayhurst. I can’t say enough about him. He always guided us in the right direction.”

“After a 50-year career of working with kids, there are people from all over the state who were impacted by Mike,” TUSD Superintendent Robert Devere said. “While I attended different conferences, there were people who would seek me out to tell me a Mike Hayhurst story. Those stories were about Mike as a person, as a coach, a teacher, a mentor, rancher and as someone who really cared about kids.”

Devere also mentioned how Hayhurst enjoyed sharing his passion for ranching with his students by introducing them to his own Brookline Ranch. Hayhurst purchased the small cow-calf operation, located on the Babocomari River between Whetstone and Tombstone, in 1988.

“Even while out working his cattle, it was not unusual for Mike to have one or two of his football players on the ranch with him where they learned about horses, cattle, branding and a whole number of things. The kids learned a lot from Mike, far more than football. He also taught high school science classes for the district for a few years. He was a strong science teacher.”

Hayhurst served on the TUSD school board, with some terms as board president.

“Because state law prohibits employees from serving as board members, Mike continued to coach football as a volunteer,” Devere said. “Serving on the school board was so important to him that he coached for a number of years without being paid.”

After the new high school was completed in 2006, the football team continued to use the old school’s field for a few years, Devere said.

“Sometime around 2008, Mike decided it was time for the new school to have a football field. The school district couldn’t afford to do the work, so Mike rounded up football players and other volunteers and transformed a rough stretch of dirt into what is now our football field,” Devere said. “He brought in his own equipment, prepared the area and he and the football players installed a sprinkler system. They also laid down the sod as a community-wide event with Mike and his football players leading the way.”

“I was teaching a PE weight-lifting class on the day they brought the sod in,” he said. “I saw the work that went into that effort, and feel wholeheartedly that the football field at Tombstone High School should have been named after Coach Hayhurst years ago. And now — with his recent passing — that football field should be named after this legendary Southern Arizona high school football coach.”

Much more than a coachLucinda Earven, a local equine veterinarian, has served on the Hereford Natural Resource Conservation District with Hayhurst since 2011.

“We both shared water concerns, and it was through the NRCD that I got to know Mike Hayhurst,” Earven said. “At that time, he was also a member of the Upper San Pedro Partnership.”

Through her role as a veterinarian and experience on the NRCD, Earven said she has seen firsthand how Hayhurst has worked at being environmentally responsible when it comes to his ranching operation.

“Like a lot of Southeastern Arizona ranchers, Mike was always very concerned about protecting the region’s natural resources through responsible grazing practices and protecting the San Pedro River.”

“I love animals, taking care of orphaned babies and watching them grow up,” she said. “Brookline Ranch was a wonderful experience for our children and grandchildren. They learned to appreciate the outdoors and enjoyed riding and caring for animals.”

Mike and Jeannie have three grown children: Patrick, Teri and Jana. Following in his father’s footsteps, Patrick is a high school football coach in California.

“I played football under my dad at Marana High School from 1984 to 1988,” he said. “I’ve been a wrestling and football coach for about 33 years.

“Several of my father’s former high school football players have had careers as coaches and others have remained friends with him through the years. Some of them include Fred Comaduran, Mitch Hoops, Gary Mauldin, Joe Thomas and Danny Batten, to name a few. It’s my hope that through these friendships, my dad’s legacy in coaching will continue on.”