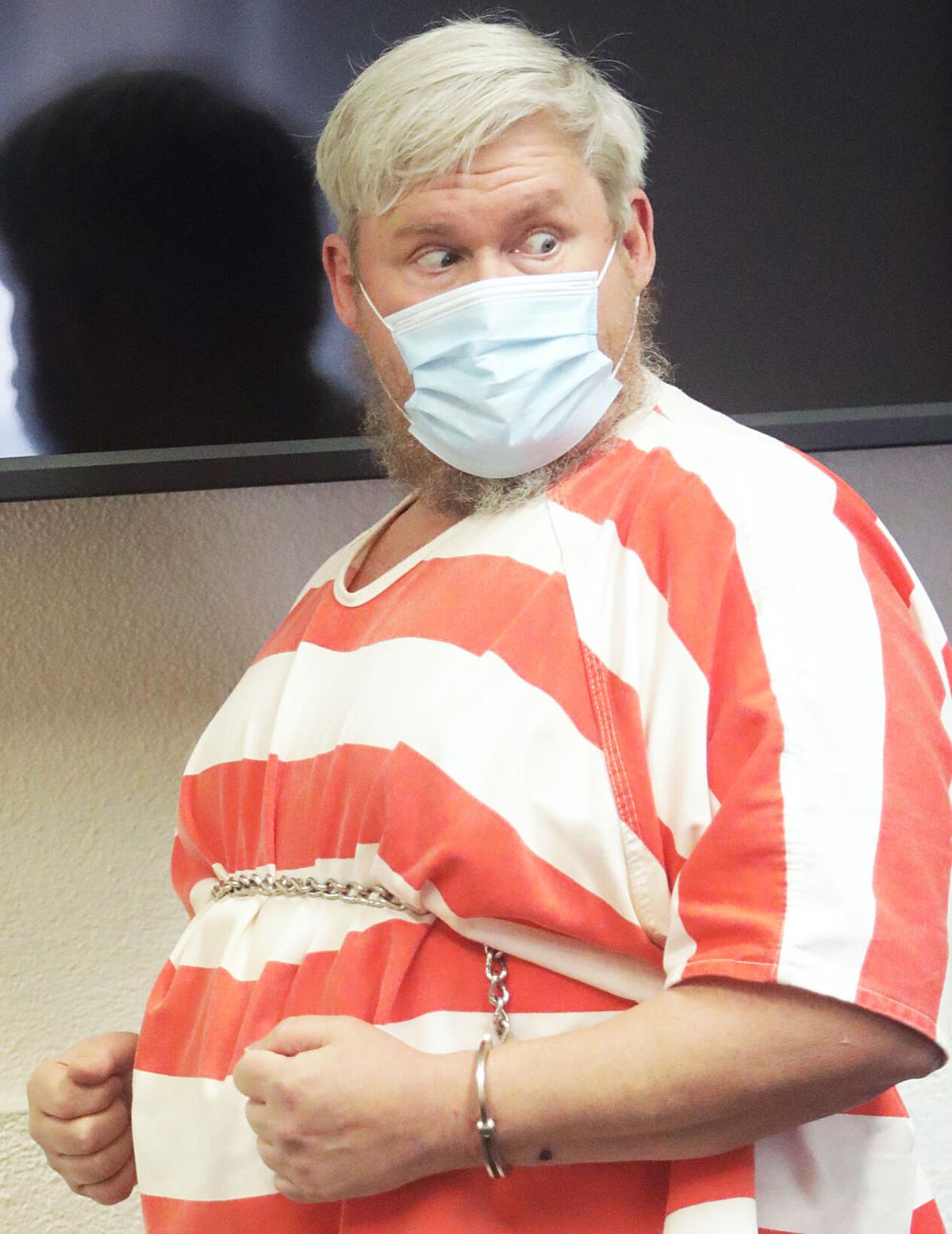 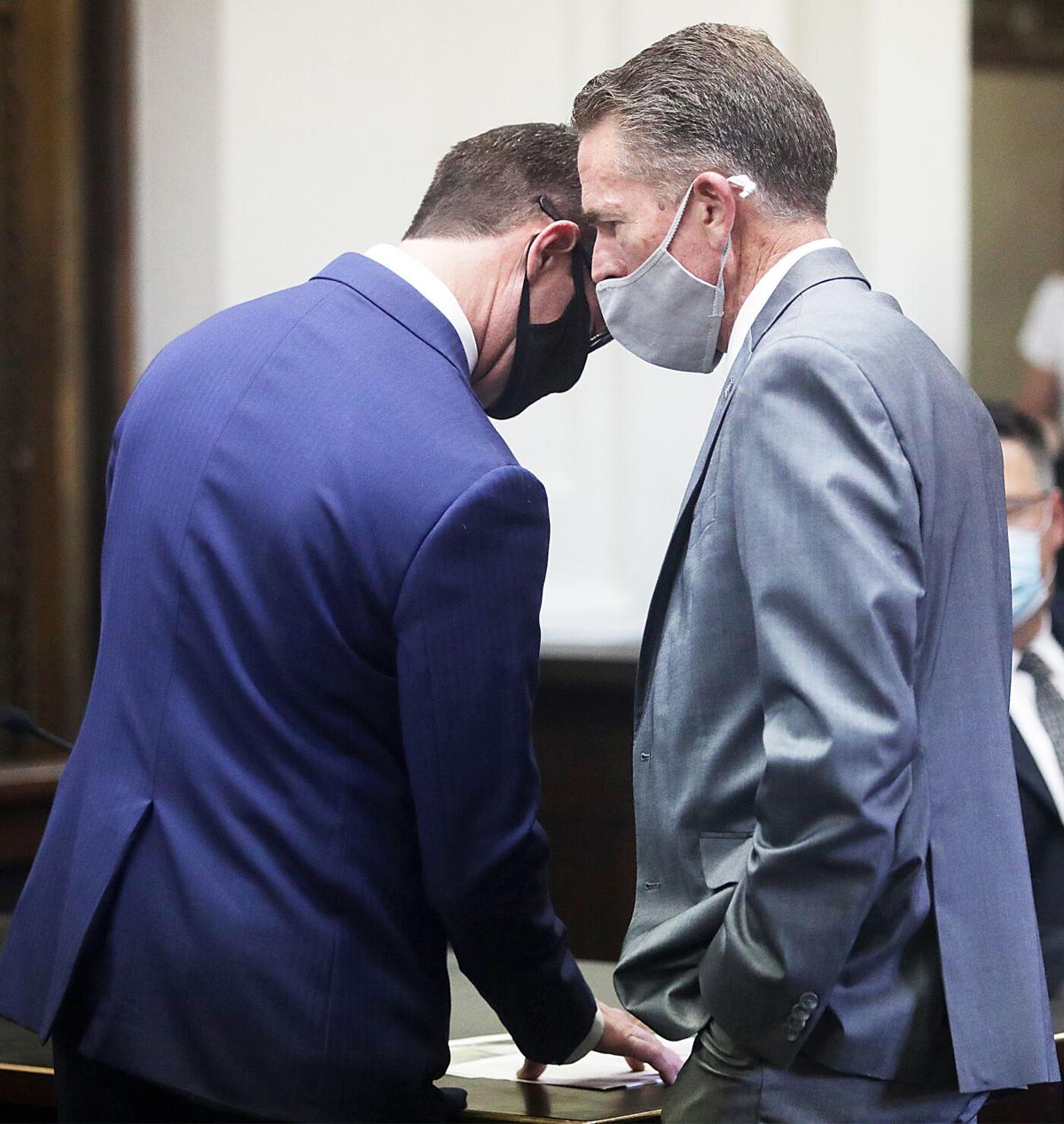 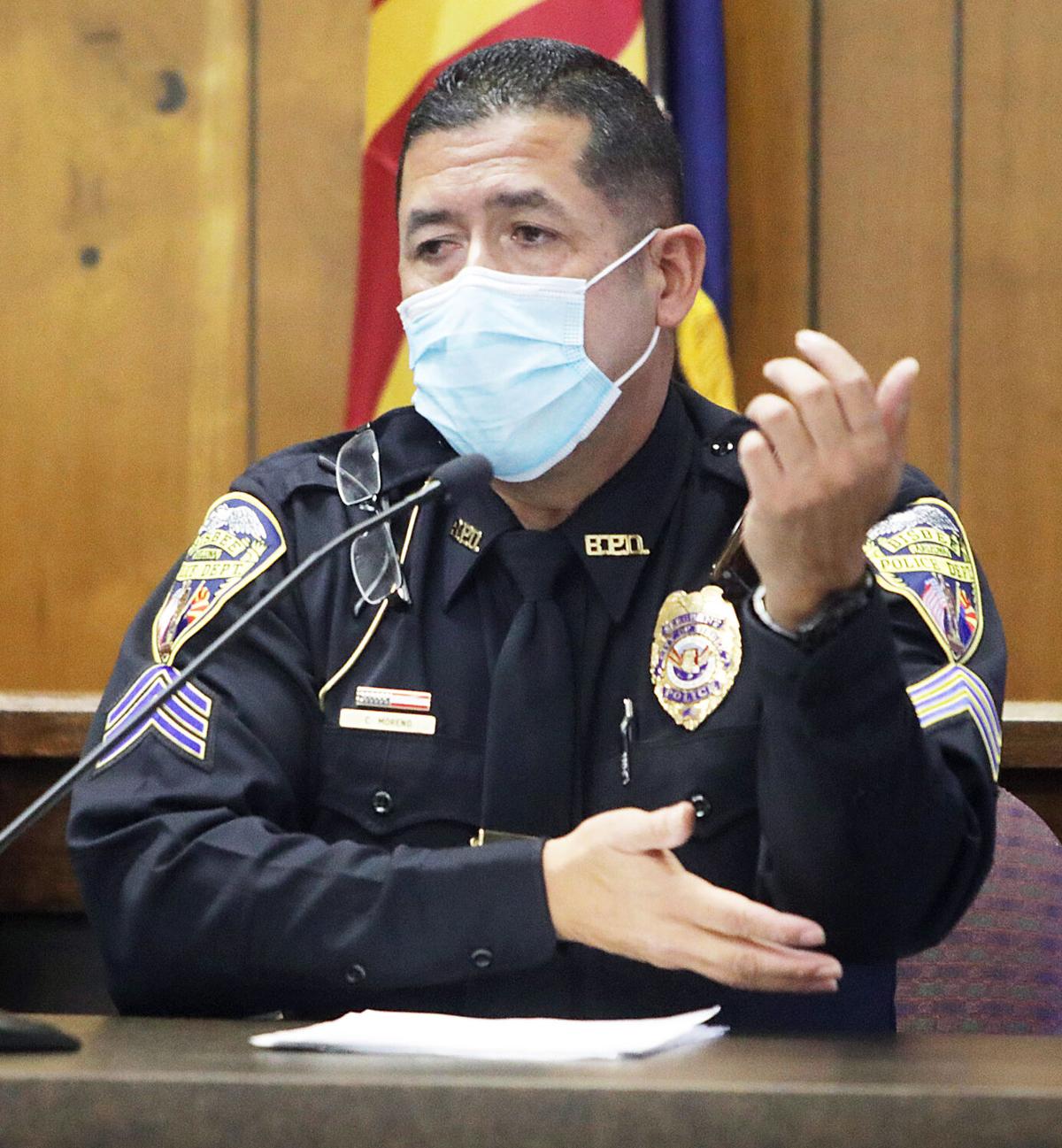 Bisbee Police Department Sgt. Carlos Moreno describes the police report from one of the sexual assaults attributed to John Daly during a bail hearing Thursday. 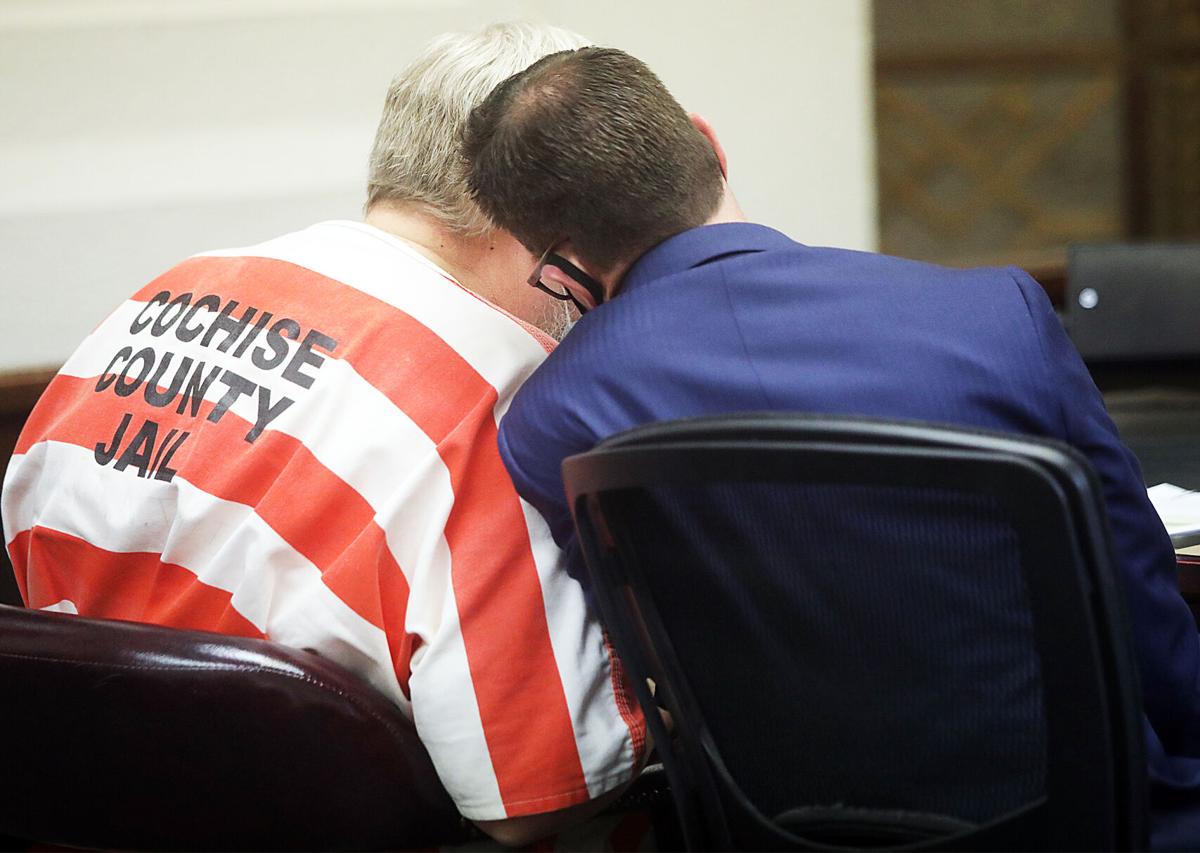 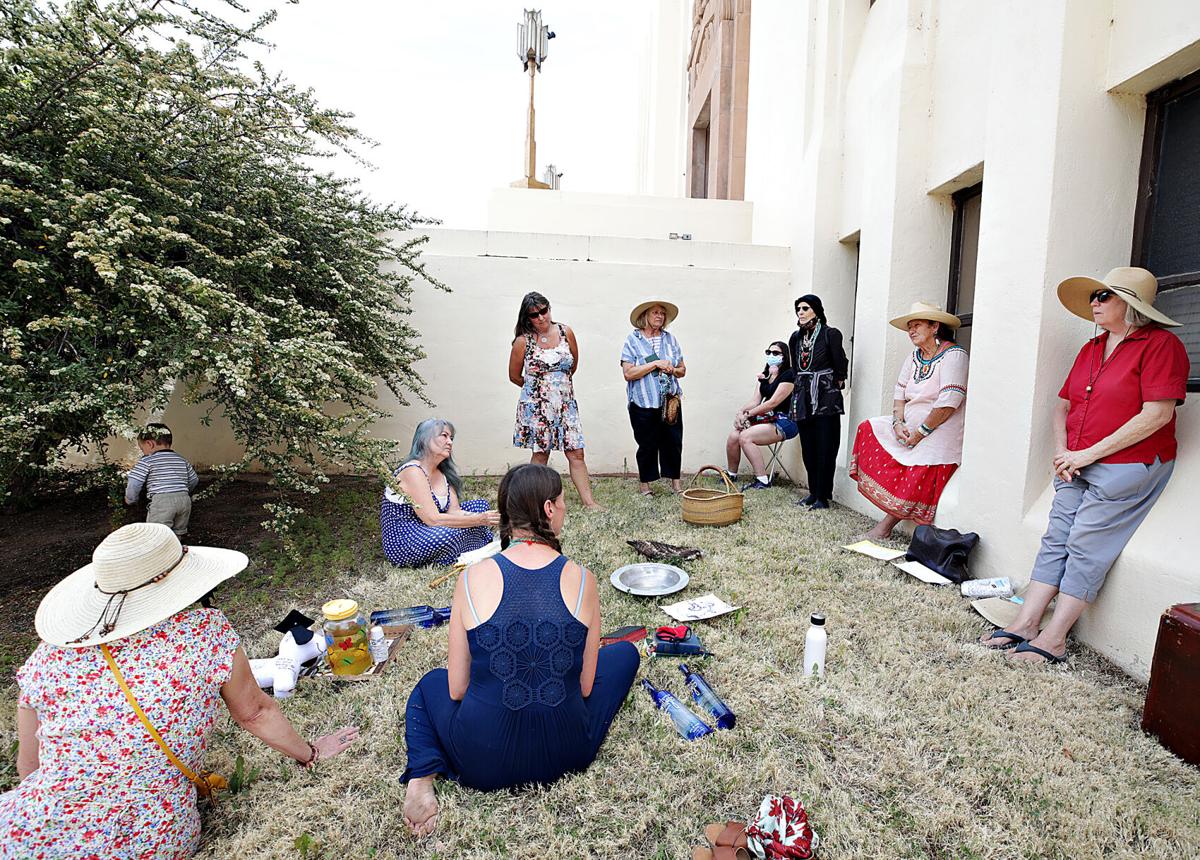 Several women waited outside the courthouse in support of the victims of accused serial rapist John Daly Thursday afternoon in Bisbee.

Bisbee Police Department Sgt. Carlos Moreno describes the police report from one of the sexual assaults attributed to John Daly during a bail hearing Thursday.

Several women waited outside the courthouse in support of the victims of accused serial rapist John Daly Thursday afternoon in Bisbee.

The morning authorities arrested suspected serial rapist John Daly III at his Hereford residence they had to use force after they said he attempted to reach for a gun, an investigator said at a court hearing Thursday.

Daly, a former Border Patrol agent with 20 years of service, was zapped with a taser, but when that had no effect on his hulking frame, “they had to ‘bean bag’ him,” said Mesa Police Detective Derek Samuel at Daly’s bail eligibility hearing.

A bean bag round is a type of baton round, fired from a shotgun, and used for less lethal apprehension of suspects, firearms websites show.

Last week investigators said they believe the 57-year-old former Border Patrol supervisor is responsible for at least four of eight rapes that occurred between 1999 and 2001 in Mesa, Gilbert, Chandler and Bisbee, At the time, the suspect was unknown and was given the moniker “East Valley Rapist.”

Daly’s DNA in the form of saliva left on a cup at his victim’s apartment in Bisbee in October 2001 matched saliva left on other cups at the homes of other victims, it was revealed in court Thursday.

Before the bail eligibility hearing Thursday afternoon, Daly was indicted by a Cochise County Grand Jury on charges of aggravated assault, kidnapping, threatening or intimidating and burglary.

He is being held at the Cochise County Jail and is expected to be arraigned on May 24, said Cochise County Attorney Brian McIntyre. While the majority of the cases he’s accused of are in Maricopa County, its not clear when Daly will be transported there.

Perhaps the strongest factor affecting Dickerson’s decision was the wrenching statement made by Daly’s Bisbee victim. The woman, whose name is not being published because she is a victim of violence, told Dickerson that for the 20 years her attack went unsolved she prayed daily for other women who had suffered what she had been through.

At one point before she gave her statement, she had to be taken from the courtroom because she began crying and shaking. She almost collapsed on the way out and had to be held up by two other women.

Mesa Police, the lead agency in the investigation, released basic information on the three cases Daly faces charges on that occurred in Gilbert and Mesa. In each instance, the victim was blindfolded and raped. Additionally, the suspect in all three incidents entered the victim’s house via an open window or door, and all three attacks occurred in the early morning hours.

The Bisbee case, now linked to Daly, includes the same patterns as well as the beating and strangulation of the victim, the report shows.

Daly’s name as a suspect in the rapes did not surface until February, but investigators have not divulged how they zeroed in on him. Once Daly became a suspect, investigators obtained his DNA sample and it matched DNA left behind in the three cases he faces charges on.

Additionally, with Daly identified as the possible suspect, investigators were able to determine that in each of the rapes that occurred over those years Daly lived in the vicinity of each of the victims.

Based on information from U.S. Customs and Border Protection, Daly started with the Border Patrol in November 1999 and retired as a supervisory agent in December 2019 from the Douglas Border Patrol station.

The Bisbee rape case is the only known incident in Cochise County thus far.

Mesa Police investigators are asking anyone who has information about Daly, or who may have been victimized by him, to call 480-644-2211.