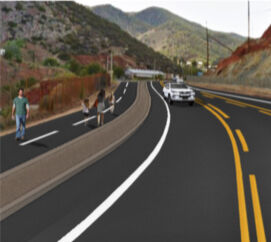 A rendition shows the multiuse path and the redesigned highway. 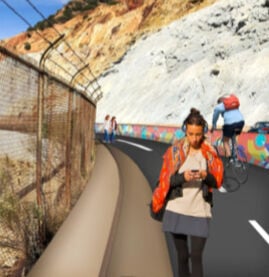 A rendition of what Bisbee's mutiuse path could look like.

A rendition shows the multiuse path and the redesigned highway.

A rendition of what Bisbee's mutiuse path could look like.

BISBEE — Two important decisions were made during the July 8 special meeting of the Bisbee mayor and City Council — the first, to seek a community development planner; the second, to move forward to the design phase on the multiuse path around the Lavender Pit which has received substantial support from residents.

The two are interconnected as the person hired as planner will help when possible with the project for the multiuse pathway around the pit.

The plan is have the new staff member help with the city’s ongoing affordable housing program, develop funds for a new city hall, handle planning activities, act as the liaison to the Planning and Zoning Commission and Design Review Board, and in general, shoulder some of the burden placed on the building inspector, city manager and other staff.

The new position will have an annual salary range of $40,560 to $59,280 plus health and retirement benefits. It requires a bachelor’s degree in public or business administration, urban planning and five years of experience in economic and community development, or an equivalent combination of education and experience. Other requirements are knowledge of city government, Housing and Urban Development and other federal funding programs, grant writing and interacting with clients, residents and staff and more.

Though City Manager Steve Pauken said there a number of priorities for the planner and the main focus would not be on the pathway, Mayor Ken Budge pointed out there was an urgency to getting the pathway underway, though funding for the project has yet to be found.

Many residents took the death of well known Bisbee cyclist and author Sergio Lalli last month to heart and wanted the dangerous condition for pedestrians and cyclists traveling on State Route 80 around the Lavender pit to be dealt with as quickly as possible to prevent any more deaths.

The completed feasibility study by KimleyHorn Associates was presented to the council by project manager Brent Crowther and offered two options for the pathway, which will run from Erie Street in Lowell to the Queen Mine Tour and Main Street into Old Bisbee. Both options would create a safe pathway for pedestrians and cyclists by reducing four lanes of traffic going east and west to two lanes each direction and a center turn lane. This would allow adequate room for a barrier to be installed to separate the two–way pathway from traffic. It would also slow traffic to 35 miles per hour, making SR 80 safer for drivers.

Crowther said 72 percent of residents responding to public surveys were in favor of a protected pathway.

The difference between the options is that Plan A stopped the pathway at the mine tour while Plan B continued the pathway down Main Street into Old Bisbee and would require either expanding the SR 80 bridge or adding an additional box culvert to accommodate the new pathway and traffic barrier.

The biggest difference is cost. In 2021 project estimates, Plan A would cost about $2.3 million and Plan B almost $5 million. However, Crowther pointed out, Plan B could be done is two phases, which would spread out the cost and allow time to seek additional funding. The first phase would take the pathway from Erie Street to the Queen Mine Tour at a cost of a bit more than $2 million. The second phase would add the pathway from the Queen Mine Tour into Old Bisbee down Main Street (which would remain a two-way street) with the bridge work costing an additional $2.7 million.

However, there are issues with traffic entering and leaving Old Bisbee with the new lane configurations and changing Naco Road from a one-way street to a two-way street as Crowther suggested.

Budge pointed out the city would lose several treasured parking spaces along both sides of Naco Road. Also, entering SR 80 from Naco Road creates sight problems, and the same is true with people entering from the Main Street access point, which would no longer have a merge lane with downhill eastbound traffic.

Crowther said the access points would be as safe as possible as they would be perpendicular to the highway.

Budge suggested working those details out in the design plan phase, the next step on the pathway project.

However, for 83 residents, sooner was better than later to get the ball rolling. Resident Donna Pulling submitted a signed petition to Arizona Department of Transportation to move forward with the project for safety’s sake and not wait for grant cycles and future funding assistance.

The petitioners also asked for the highway to be re-striped from the Mule Pass Tunnel into Bisbee and that new LED lights be installed in the tunnel for better visibility. Last year, well-known Bisbee resident Vincente Abril was struck by a car and killed while cycling through the tunnel.

They also suggested urging the Department of Public Safety to more frequently patrol the area to slow traffic and prevent more deaths and vehicle accidents.

Resident Corinna Eastman said she was struck by a vehicle while cycling to work in Old Bisbee at night, which threw her life into chaos. She agreed the project should move forward with Plan B as soon as possible.

“There’s not enough room to walk along the sidewalks,” she added. “I’ve done that, too. I don’t understand why people complain of having to slow down to save a few seconds.”

Councilwoman Leslie Johns spoke to those against the pathway: “I want people to know we understand your reservations and the loss of lanes around the pit. Your concerns have been heard.”

For Councilwoman Anna Cline, concerns of hampered travel by first responders were at the forefront of her mind, though she likes the pathway idea. She related childhood memories of riding bikes up the hill into Old Bisbee.

“The deaths are tragic, but I don’t know if this is the answer,” Cline added.

Councilwoman Joni Giacomino addressed concerns that the money spent on the pathway could be better used.

“There could be more people using it if it was safer,” she said. “I’d bike to Old Bisbee. It’s a good additive to connect the city and it gives people more options for mobility.”

Budge, Giacomino, Johns and Councilman Frank Davis voted to move forward with Plan B for the multiuse pathway. Cline voted against it.

Grant funding will be sought for the design phase.