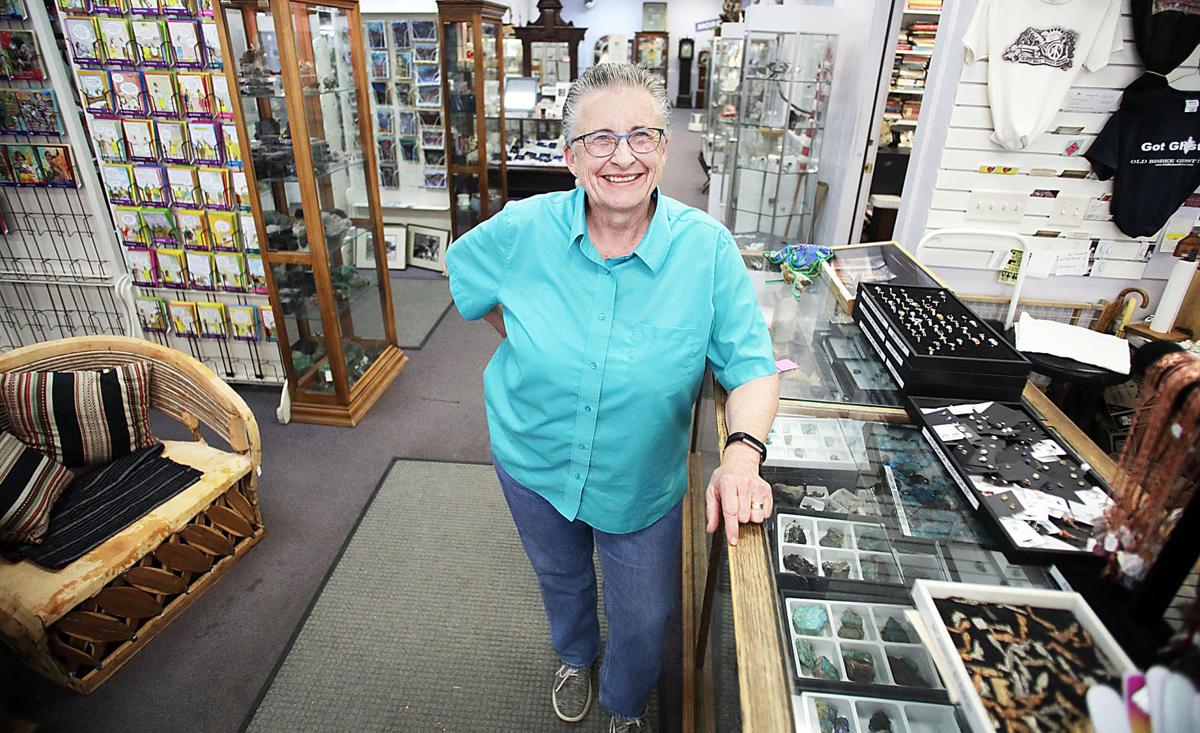 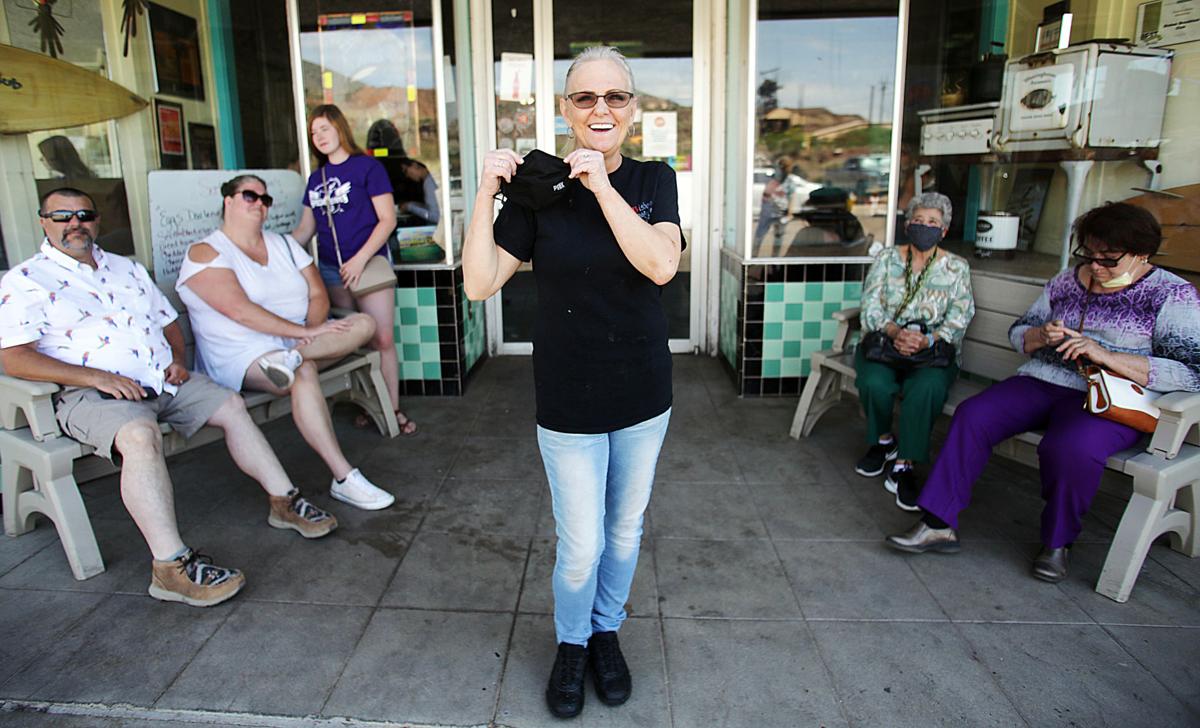 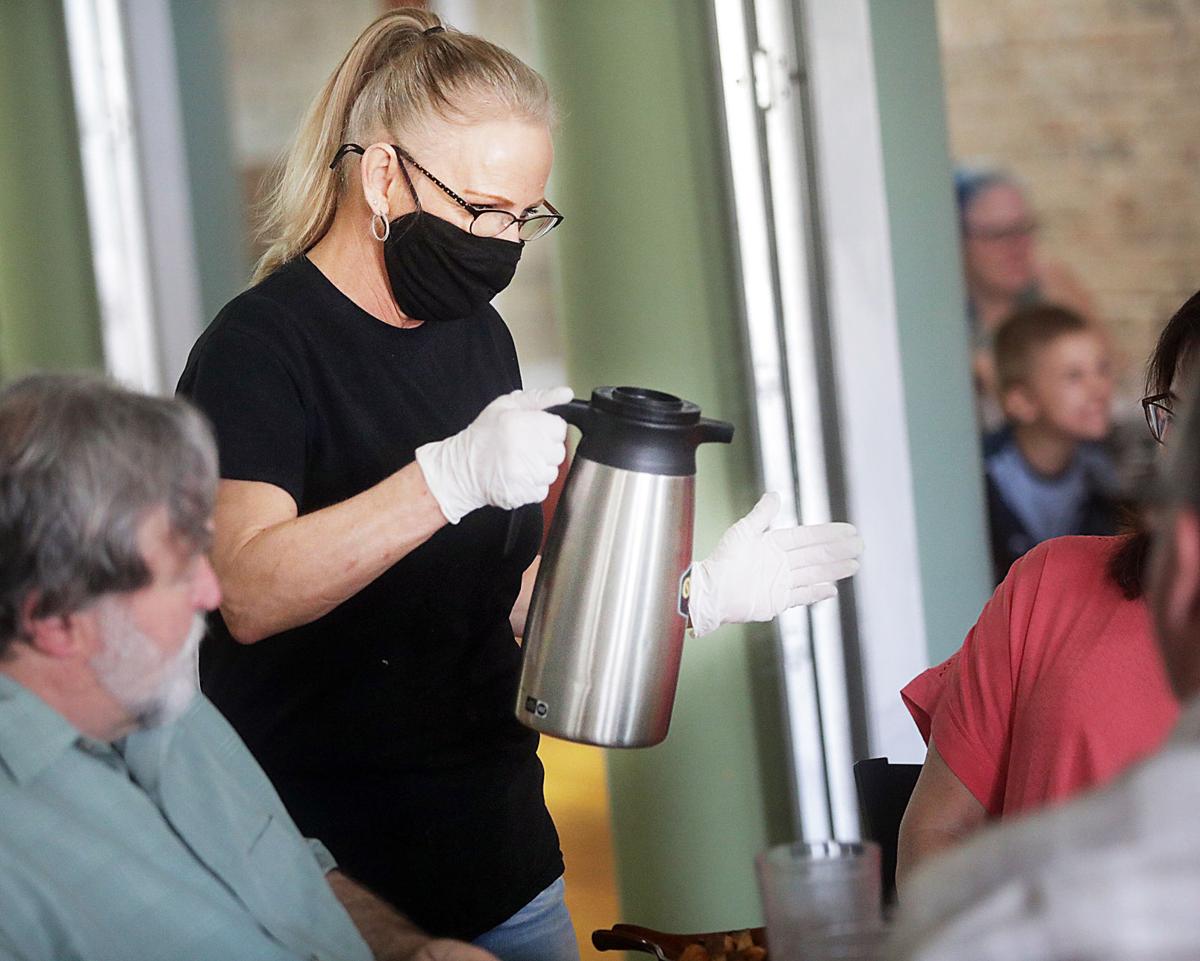 Manager Mitzi Vantine works last weekend at the Bisbee Breakfast Club. The eatery reopened on May 11.

Manager Mitzi Vantine works last weekend at the Bisbee Breakfast Club. The eatery reopened on May 11.

BISBEE — Many Bisbee businesses and restaurants have reopened for customers, many with new setups or adaptations, after Gov. Doug Ducey gave the go-ahead last month.

Most are following the guidelines for the wearing of masks and gloves by employees, social distancing, limiting the number of people to enter and frequent sanitation practices.

Bisbee Breakfast Club manager Mitzie Satterfield was happy to fling open the doors and welcome back the locals and visitors, even with the restrictions. The clinking of silverware on plates and the low murmurs of friendly conversations brought a semblance of things returning to normal, including the line of customers waiting to get in.

People were seated with plenty of distance between tables and were served by bustling staff in masks and gloves. Staff also washes their hands every 30 minutes and changes their gloves frequently. And, BBC now uses one-time menus.

The restaurant was closed for a month, said Satterfield. During that time, rather than layoff staff, they were put to work painting and deep cleaning the building. Then, BBC was open for take out for a few weeks until the reopening on May 11.

The popular BBC now boasts seven more locations, two in Phoenix and five in Tucson, and two of them opened for takeout during the state-wide closure, Satterfield added.

“It was kind of scary to open,” she said. “So many rules to follow. We sanitize every time a customer leaves the table. We take the staff’s temperatures as they come in. We are committed to continuing to maintain a safe, healthy environment for both our staff and guests. People seem more and more comfortable getting out again.”

Vintage Redbone manager Lucy St. John was busy sewing masks in the popular shop on Subway St. She decided to go with the appointment only option for opening, but things were pretty quiet.

“The rug fell out from beneath us,” said St. John. “We were just about to begin our tourist season when we had to close.”

St. John was able to acquire a small business loan through the Paycheck Protection Program, which helped, as did the online shopping website which features a lot of the merchandise for sale as well as her handmade retro skirts. So far, Redbone has managed to pay rent.

She explained many people have the misconception that Bisbee retailers and artists are rich because they have a store. “But, no, we’re not rich. This left a lot of small retailers hanging.”

St. John said, “Right now, we don’t want big crowds. We want to keep our numbers down. We’re hanging in there for now. We hope all the Bisbee retailers can hang in there.”

Now that restrictions were being relaxed a bit more, she was hopeful for a return to normal and looked forward to seeing the locals and visitors once again.

A big problem for Bisbee merchants and restaurants was the time of the closure of business. It came mid-March just as the spring tourist season was beginning. The early season is what helped carry most businesses through the dry summer months was lost and there is concern for small businesses which may not be able to reopen.

Kathy Sowden, co-owner of Kinders Keepers on Main St., said February was off to a good start helping to make up for a lackluster January before having to close the doors on Mar. 20. She sells a good bit on Ebay and that has helped keep the shop afloat, though she is having to use savings, something she would rather not do.

“I worry some businesses may not reopen,” she remarked. “When you’re closed two and a half months out of four, it makes it hard. A lot of us are retired.”

The shop is open by appointment, as is Gimme Shelter, the non-profit store of Friends of the Bisbee Animal Shelter. People can call and make an appointment if they see something of interest in the shop windows or an online post.

“We have a lot of merchandise to move for the shelter,” she noted.

Proceeds from Gimme Shelter are donated by Friends to the Bisbee Animal Shelter which needs the influx of funds to care for the animals.

Since the close of business, she has been focused on cleaning and sorting normally done during the slow summer weeks.

Though other Old Bisbee shops have reopened to the public with social distancing and employees wearing masks, she is not ready to allow street traffic in just yet. She keeps an eye on the number of cases reported by the state as many customers are from the higher impact areas like Tucson and Phoenix.

“I want to see them decline before I open,” Sowden said. “People say it’s just the flu, but it’s not. It reminds of the AIDS epidemic and we still don’t have a cure for it.

According to the state, as of Tuesday morning, June 2, there were 89 cases reported in Cochise County, of which 52 cases have been released from isolation. Two people have died. Statewide, there are a total of 21,250 identified cases in Arizona with 941 deaths. The state had 1,127 new reported cases and 24 deaths on Monday.

As recently pointed out by Cochise Health and Social Services director Carrie Langley, the increase in cases is due to the recent testing blitzes in the county and the state. Chiricahua Community Health Centers tested people in Sierra Vista and Douglas a few weeks ago, and just last week offered testing to Bisbee, Benson and Willcox. The latter testing results will be back sometime this week.

For those wanting to eat once again at their favorite restaurants and shop their favorite stores, it is best to check with the businesses to get the new days and hours of operation and restrictions which may be in effect.

Editor's note: A previous version of this story incorrectly identified Bisbee Breakfast Club manager Mitzie Satterfield as the owner of the restaurant.

My Declaration of Emergency is still in place. City buildings will remain closed to the public and Commission meetings will return in June, using remote technology.

The mask vs. no mask argument is unwinnable by either side and perhaps we should remember that this virus wave will end, and friendships fractured over this polarizing argument may not mend. We are all in this together and we still have personal choices and in reality, only answer to ourselves. Hopefully, all of us will do a better job of respecting each other’s personal decisions by taking the hygiene steps you feel appropriate and removing yourself from being around those that you feel don’t.

Business owners do have the right to require masks be worn in their place of business and although I cannot mandate, I do strongly recommend the continued use of masks in public settings.

Please treat yourself accordingly if out and about or do the smart thing and continue to stay at home if possible. Remember, no one can make you sick, you are responsible for yourself. Due to the governor’s orders, opening (or not) is a difficult personal business decision and hopefully will be respected as such.