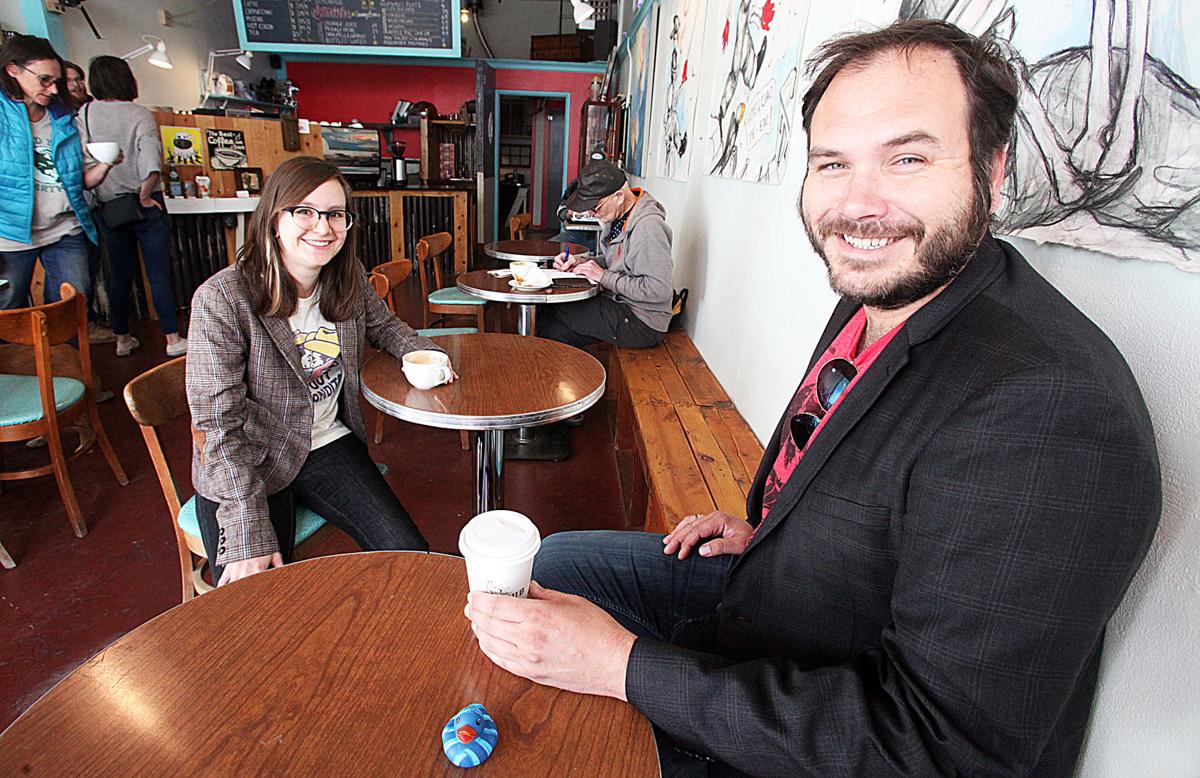 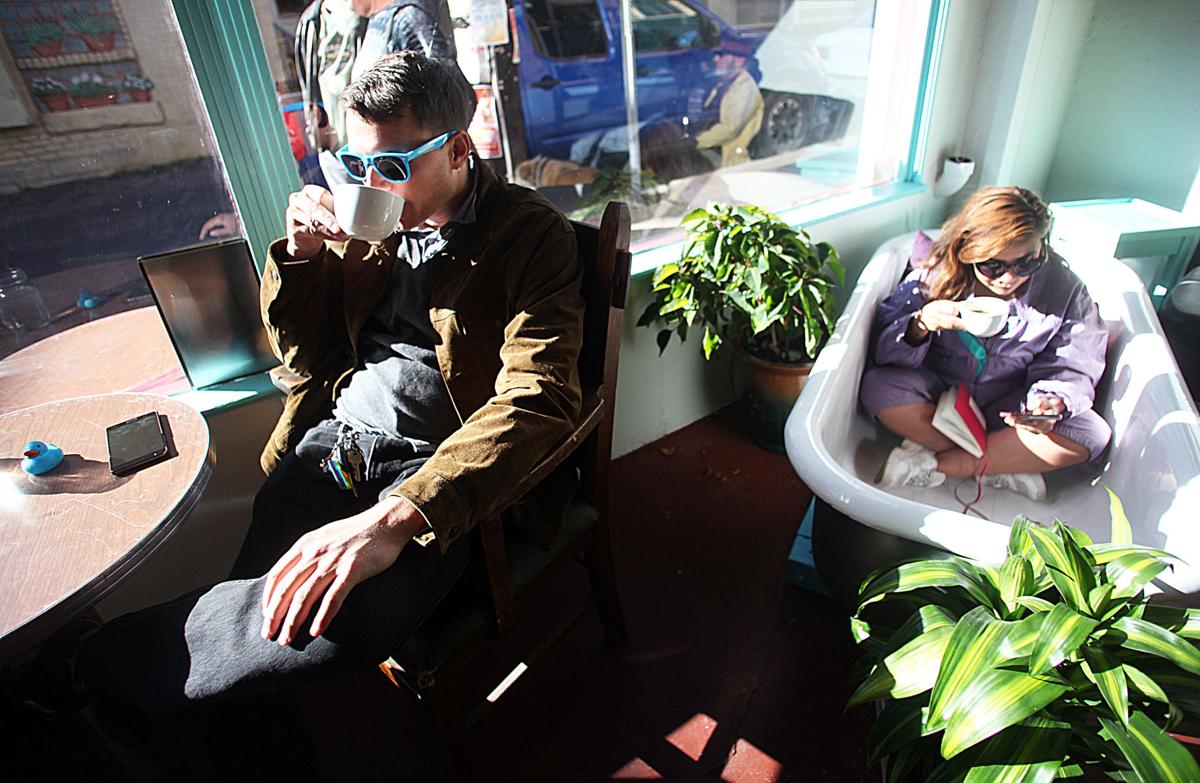 Kyle O’Brien and Karla Atencio, who are visiting from San Diego, California, enjoy a hot beverage from the Bathtub Coffee House recently. 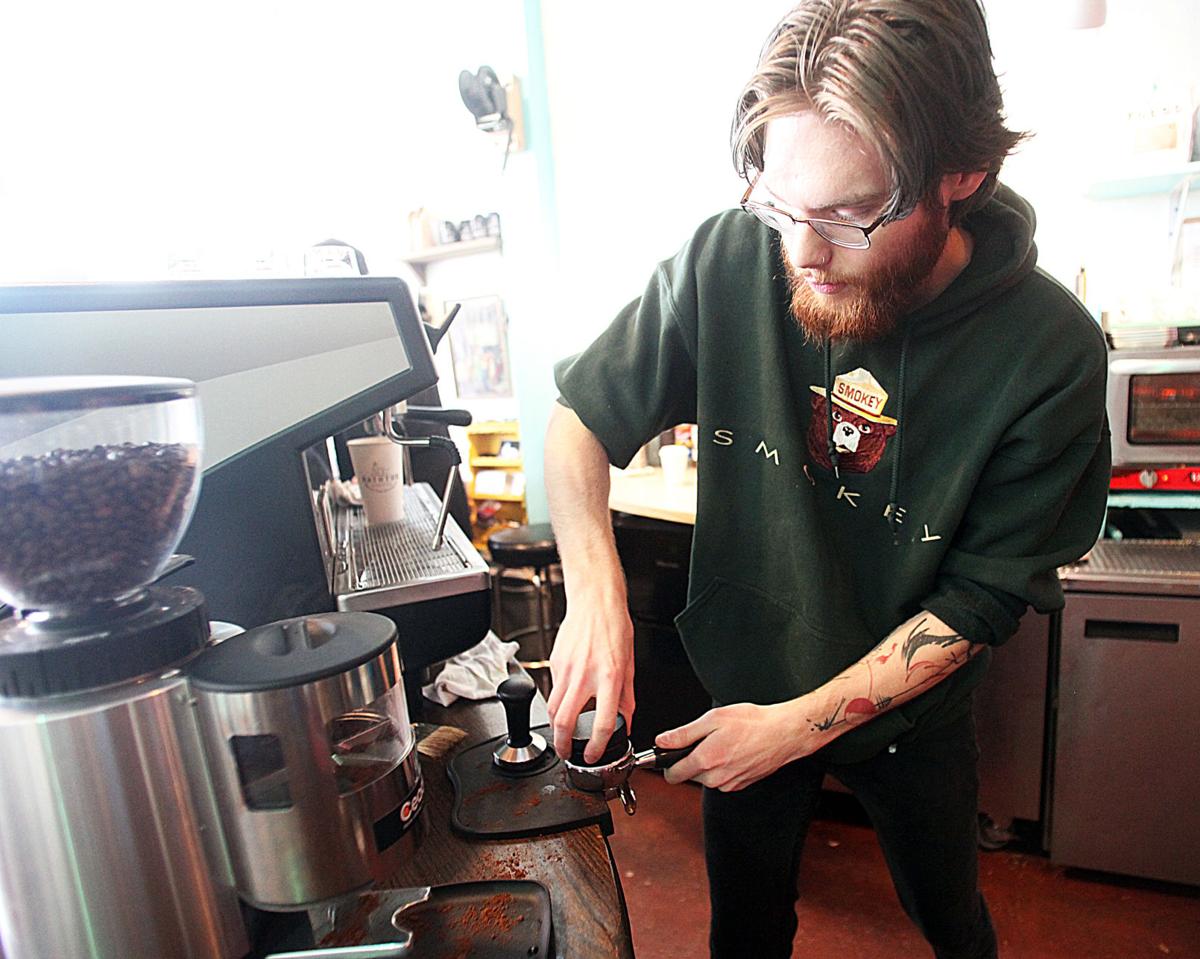 Kyle O’Brien and Karla Atencio, who are visiting from San Diego, California, enjoy a hot beverage from the Bathtub Coffee House recently.

BISBEE — Old Bisbee has a new coffee house and owners Diandra Ryan and Morgan Oxley could not be happier as they watch their newfound customers coming and going, reading and chatting, and their reactions to the bathtub sitting near the front window.

The bathtub is one of the first things noticed when entering.

Oxley explained the original idea was to design the interior as a takeoff on Bisbee’s past. He went to the library, grabbed an armful of history books to read. On his way back, he saw a discarded bathtub.

“People do strange things with bathtubs in Bisbee. You see bathtubs as planters,” he said. “So, I thought, ‘Why not bring it back to the shop.’ ”

Customers get in it daily and it provides an opportunity for selfies.

The other thing noticed are the dogs lazing around on the floor. The Bathtub Coffee House is dog-friendly and it seems people who like to take their dogs on morning walks also want to grab a coffee and gab with a neighbor.

The shop opened for business initially on Oct. 5, but the couple shut the doors and revamped the interior. On Oct. 12, they reopened and things have brewing along ever since.

Their creation is quite impressive for an endeavor which took place in just 45 days from signing the lease to opening the door.

Oxley was visiting with a friend at the Black Sheep Imports and noticed the former coffee house next door to it had closed. He was thinking about moving to Bisbee, but did not want to live in a town with just one coffee house. A light bulb came on.

A quick call to the owner and a signature on the dotted line started them on an adventure in coffee.

“We didn’t know anything about coffee. We just thought the idea of a coffee house sounded interesting,” said Oxley.

They were thankful the previous owner left the bar and the sinks, but in looking over their new digs, they knew some renovations were necessary. Painting was the easy part. It was getting the 200-volt line for their expresso machine and the plumbing ready that proved to be big projects.

Refrigerators also proved to be a challenge as two used ones conked out. They bought a new one in Tucson, but the delivery driver did not want to take the truck down the narrow street. He was unable to reach them by phone to get an alternate delivery location and decided to go back to Tucson.

By the time Oxley and Ryan were able to reach him, he was almost in Tucson. They asked him to meet them in Tombstone and they would haul it back. He agreed. Now, they just had to find somebody with a truck. By happenstance, a local who overheard them talking volunteered his truck.

Tables and chairs were bought from the American Legion hall just down the street. Ryan noted the Legionnaires also let them have a door they liked.

“It made everything so easy. That’s the kind of people who live here,” said an amazed Oxley. “They are very supportive.”

Being a coffee house, they knew they had to serve great coffee, so they posted a notice in an online forum asking for a brewmaster who was willing to move to Bisbee. Andy Hoffbauer was the only respondent and he is now the shop’s manager. He selected specialty coffees from local Old Bisbee Roasters and Press Coffee Roasters, an award-winning company out of Chandler.

Poe Dismuke and Sam Wolcott, of Sam-Poe Galleries, provided artwork for the walls.

With all the renovations completed, the new refrigerator in place, a coffee expert handling purchases, the next step was the menu for coffees and food. They knew they wanted to keep it simple, but also cover a range of possible requests from customers.

Prices are fair for Old Bisbee. Oxley said he wanted to offer lunches in the $10 range and he met that goal.

The atmosphere is friendly and comfy, like a big home kitchen; well worth a trip to check it out.