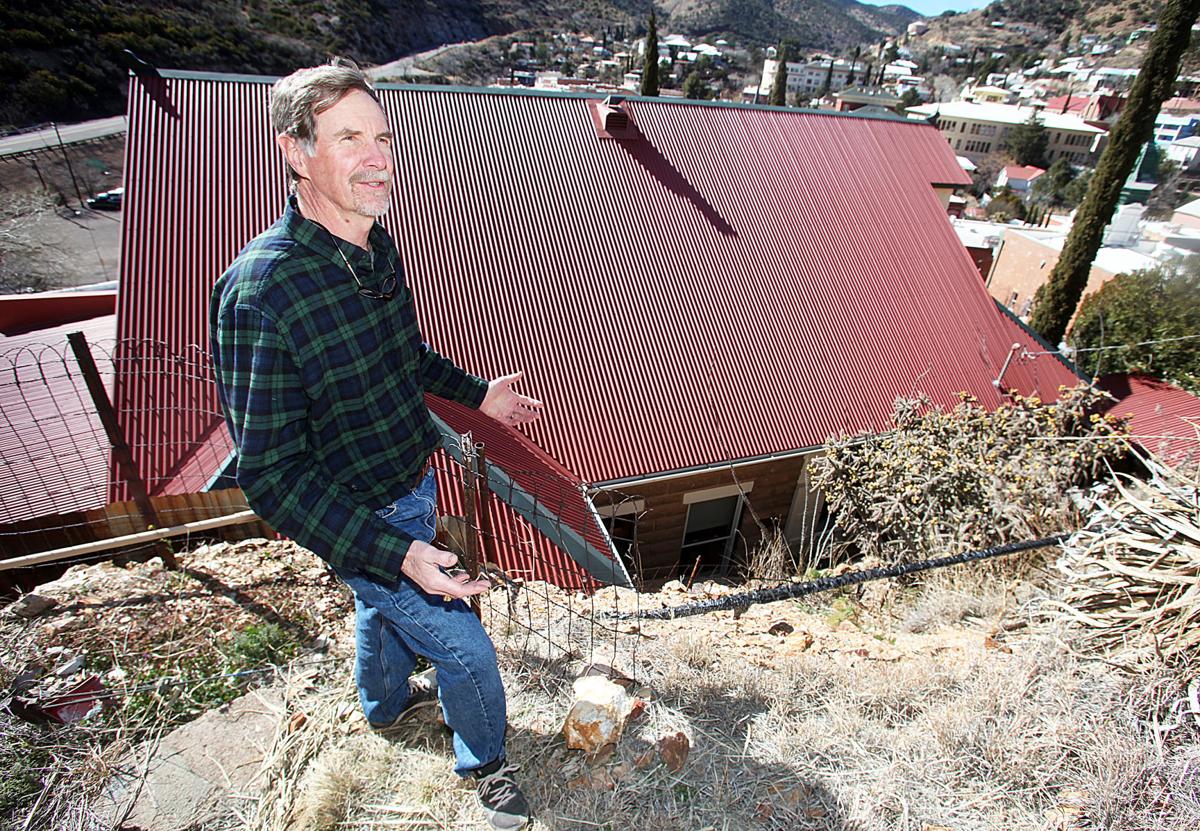 Bisbee homeowner Ken Budge stands in a lot above his home displaying a retaining wall which is deteriorating while threatening his house. Budge says documents show the wall is city property and it is responsible for repairs. 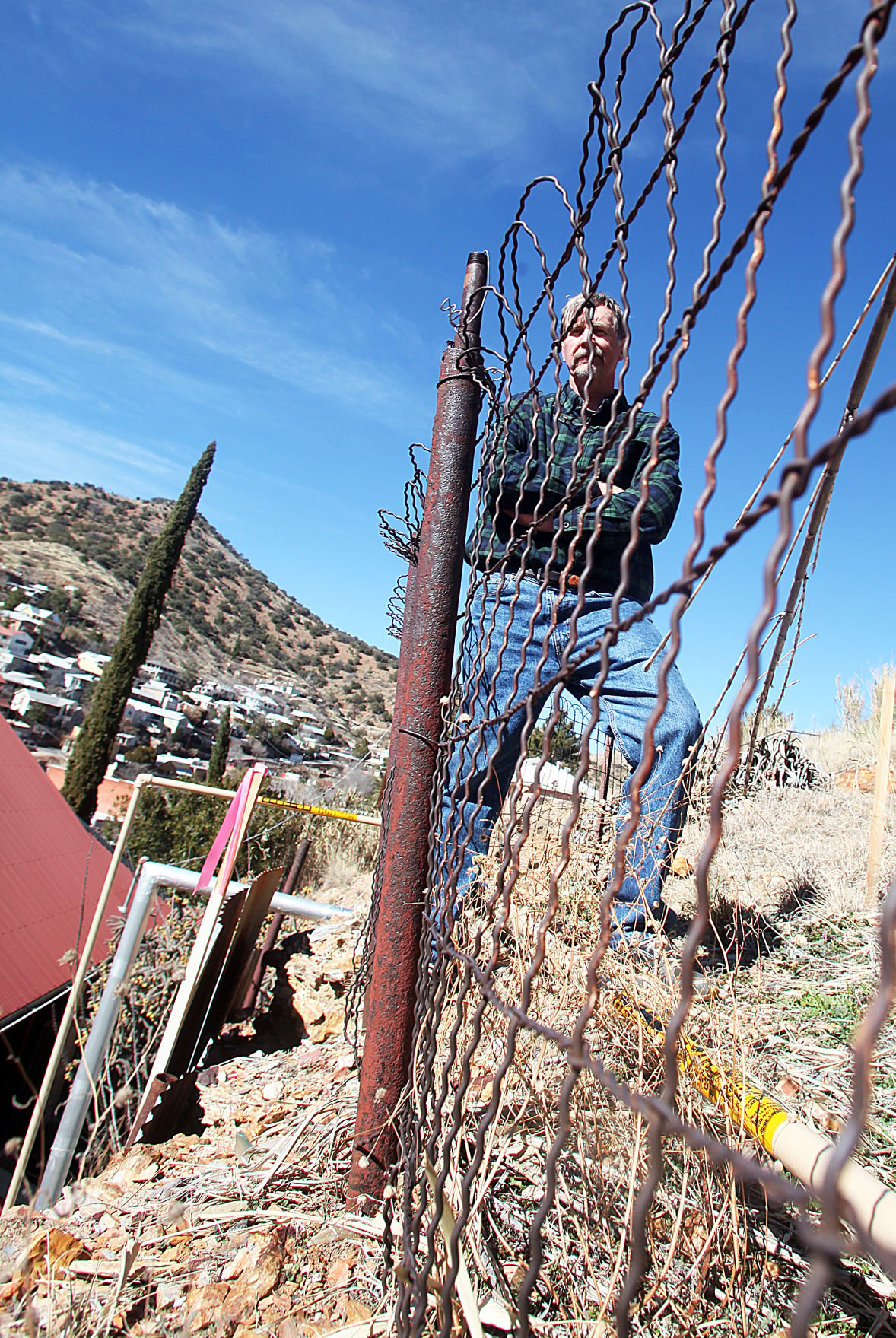 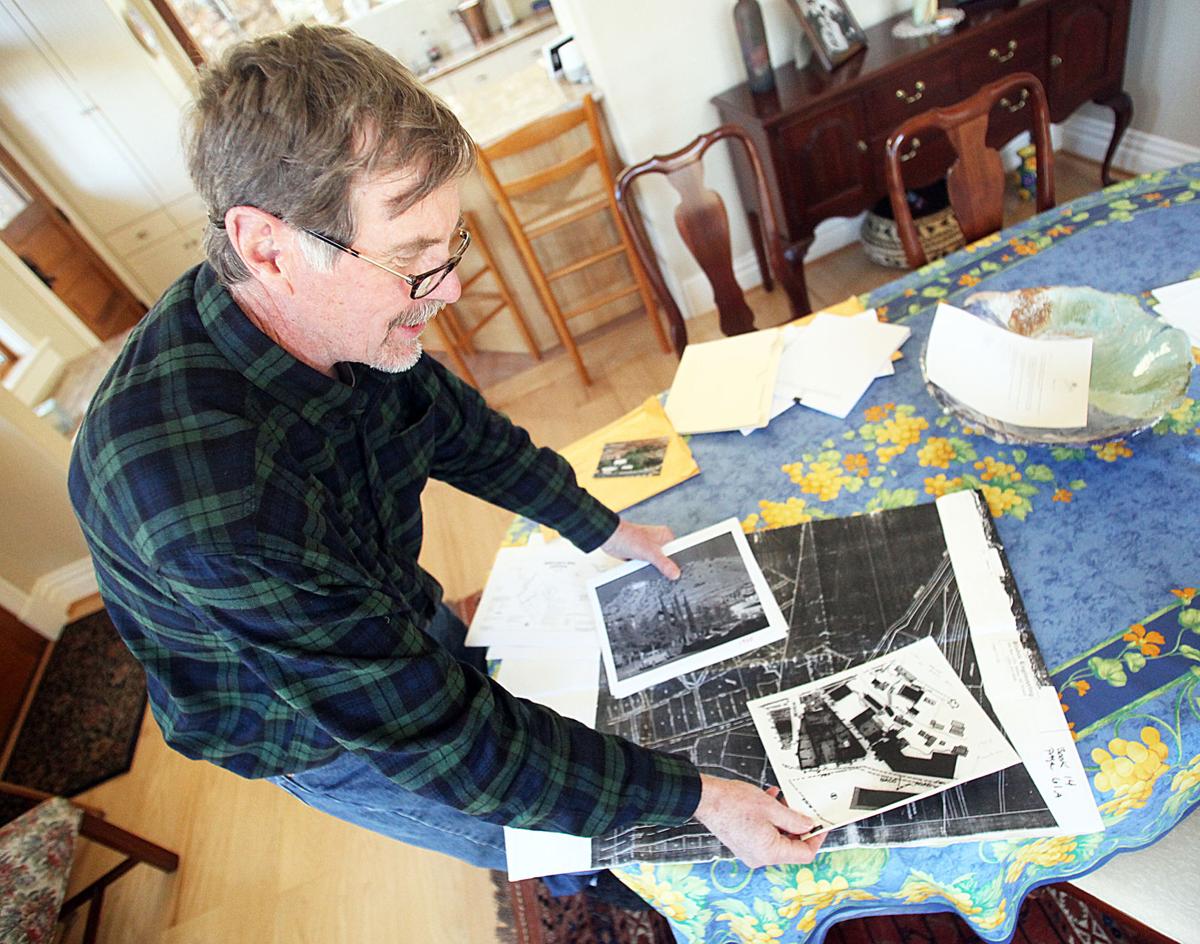 Ken Budge looks over a portion of an old Bisbee townsite map and photos which show city owned boundaries. 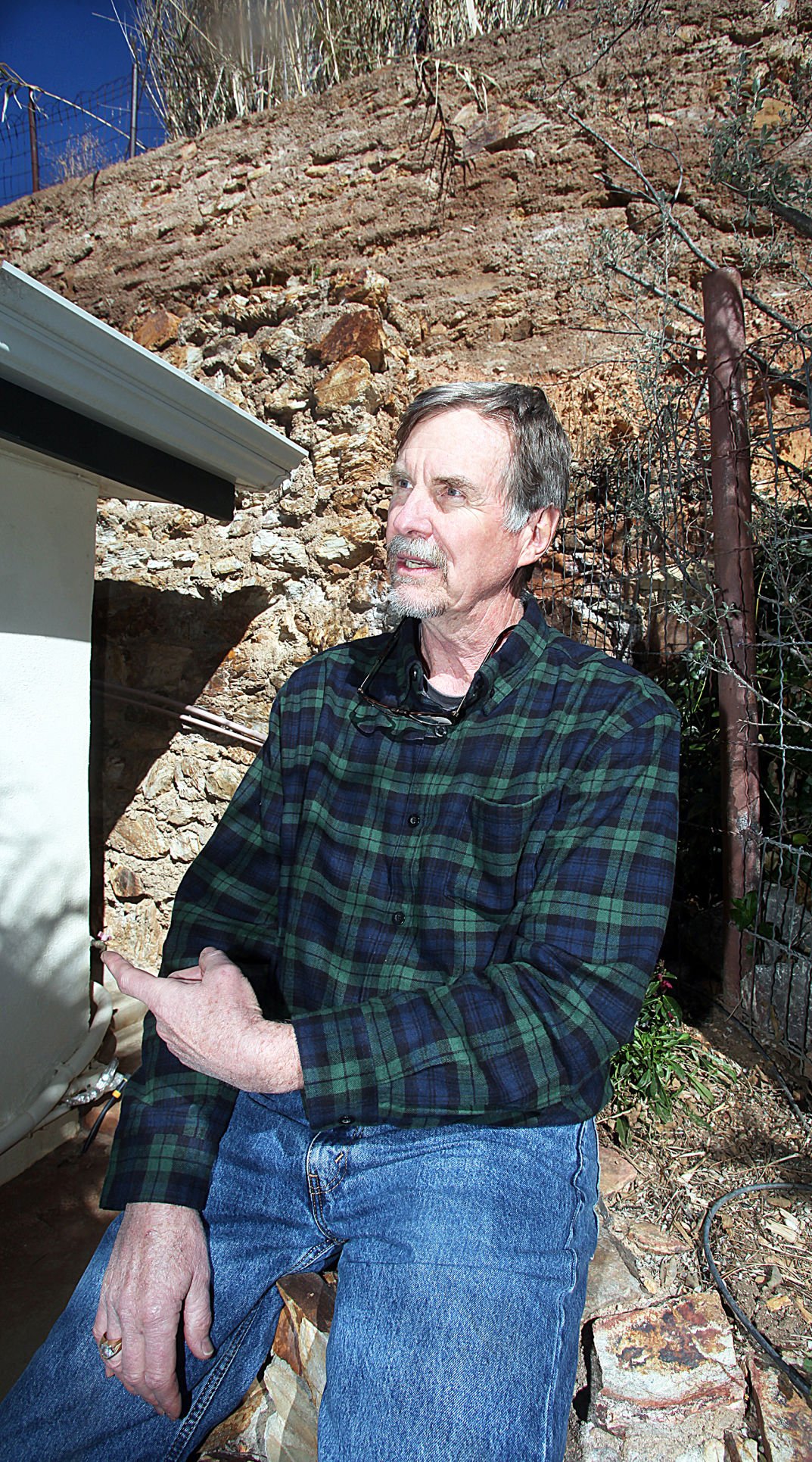 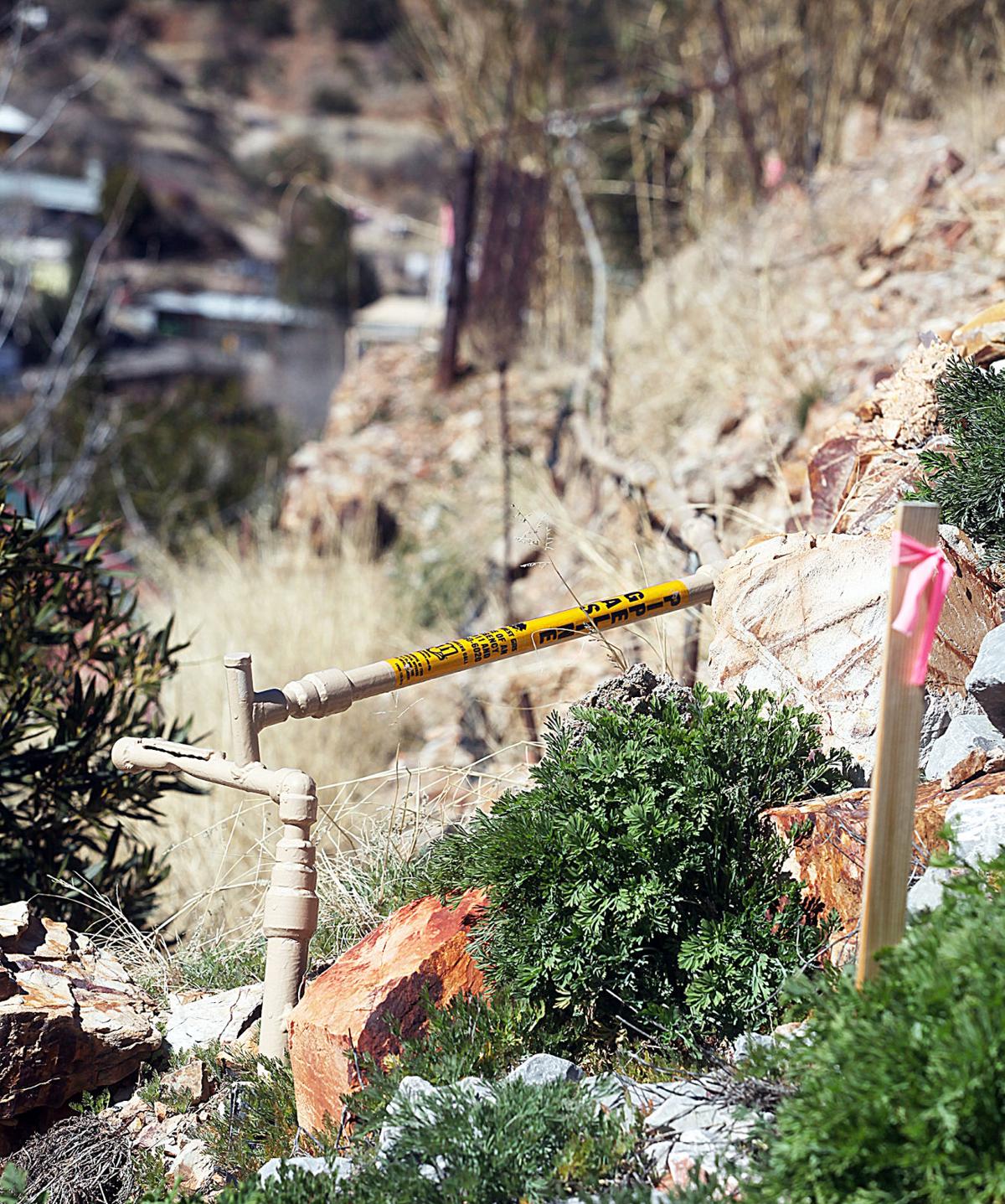 Bisbee homeowner Ken Budge stands in a lot above his home displaying a retaining wall which is deteriorating while threatening his house. Budge says documents show the wall is city property and it is responsible for repairs.

Ken Budge looks over a portion of an old Bisbee townsite map and photos which show city owned boundaries.

BISBEE — A Bisbee woman who is disabled was allowed to move back into her home last week, though with stipulations, after it was deemed uninhabitable by the city due to the collapse of a retaining wall close to the foundation on Nov. 29.

Christianne Bovee now has 60 days to provide a structural engineer report stating her 100-year-old home is on a firm foundation and has no connection to the failed retaining wall which was not on her property, or, if stabilization is needed, she has to turn in engineered design plans.

The wall failed the day after Thanksgiving from heavy rains and collapsed onto vehicles below in a parking area. Since Bovee’s home sits close to the wall, the city prohibited her from living there due to safety concerns.

Joe Ward, city building inspector, explained since there was insufficient support to hold back the earth, the unstable dirt presented a danger. In a Nov. 30 letter, he issued a corrective order requiring her to permanently stabilize the ground and foundation supporting the house. In addition, since the wall adjacent to the south edge of her property failed, she was to hire a “registered design professional” to examine and determine the foundation is “capable of supporting all nominal loads and resisting all load effects.”

The letter gave her 30 days to get the needed construction documents approved and a building permit issued. She was given 90 days to complete the repairs, though an extension could be granted if there were extenuating circumstances.

According to the letter, failure to comply with the notice would cost her initially $50 to $100 for the first offense, $100 to $250 for the second and $500 to $750 for the third. “Each day the unlawful condition exists is deemed a new and separate offense,” he wrote.

Bovee tried to work with the city and noted she did not own the wall property. She hired civil engineer Lynn Kartchner, who has done soil structure assessments in the city for years, to assess her foundation and he indicated it would be safe for her to return home.

Ward sent a second letter on Feb. 4 which stated, “The city is willing to accept Mr. Kartchner’s letter regarding the stability of your home with two conditions.” Those conditions are submission of plans to rebuild the wall no later than 8 a.m. on Feb. 10 and have the replacement wall ready for final inspection by June 15, all at her expense.

According to MacKinnon, the collapse of the wall occurred in the afternoon on Nov. 29 and startled Bovee to the extent she went to a neighbor’s home.

The Bisbee Police and Fire Departments responded to the 911 call. No one went into Bovee’s home to see if the collapse of the wall had weakened the structure or the foundation of her home. No one attempted to speak with her prior to posting condemnation notices on both doors, he said.

He told the board members, “It was done with no real basis to determine what the situation was with the building. Imminent danger is a situation which could cause serious injury or death at any time. There were other options that could have been used other than posting that notice.”

MacKinnon said Bovee went to talk with Public Works Director Jesus Haro, who is in charge of the city’s infrastructure. Haro allegedly told her she had to rebuild the retaining wall even though it was not on her property. As a “rule of thumb,” it was her responsibility because she lived above the wall.

“Her house sits above the wall and is set back from the wall,” MacKinnon added.

He further argued, the land could well be owned by the city or the residents who lived below, but on a parcel map acquired from the county, it appeared to be a no-man’s land. There is also a county stamp on the plat map stating: “Undesignated areas within the townsite are lands held in trust by the City of Bisbee” which the city mayor and council accepted over 100 years ago.

In the days after the collapse, local contractor Jon Sky was hired to help stabilize the earth, though it was a temporary fix. Crews tried to push the soil back uphill, then placed heavy plastic sheeting over the ground. As a last step to help hold the dirt, the broken concrete from the fallen wall was placed over the plastic.

However, Sky confirmed he was not a certified, licensed professional, nor an engineer when asked by the board. He did tell them he was experienced with Old Bisbee’s varied geology due to his work. In addition, he pointed out the foundation sat about five feet from the retaining wall.

Kartchner told the board members Bovee’s home was probably resting and secured to bedrock, as many Old Bisbee homes are, and he felt it was safe for her to return. He also said he had a license to assess if a structure is stable or not and he believed her home’s foundation was not reliant on the retaining wall for support.

MacKinnon noted Bovee was disabled and has suffered because she had to relocate. He suggested the city had “a responsibility to make reasonable accommodations” for her disability, but did not.

Bovee, who has lived in the house for 45 years, explained her health issues which tended to make her a homebody and being out of that familiar setting was difficult for her over the past two and a half months. The stress affected her health and she was prescribed a higher dose of medication to deal with it, she said. On top of those stresses, her security cameras have detected intruders on her property. She said she was told by a police officer that the longer her home sits vacant, the more likely the chance for break-ins.

“I am hurt that nobody responded or really explained the statutes or even acknowledged who owns the property,” Bovee emphasized.

Her brother Steve also questioned why no one got in touch with her or him as he left his name and number with the authorities the day the wall collapsed.

Residents Bill Bailey and Ken Budge also spoke up on her behalf and asked the board to allow her to return home.

“You can’t put someone out of their house for two and a half months without any contact from the city,” Budge said. “Let’s move forward and let her back in her house.”

Haro was given the opportunity to rebut Bovee’s account of their discussion. “I did my best to give her help. I did not say she had to rebuild the wall. The direction we’ve been given is that whoever’s land is above a wall is responsible for it.”

Hopper, an architect, went on to say he stood by the decision of Ward to deny occupancy. “We have not heard how the property owner will stabilize the area of her property by the wall. As far as I’m concerned, whose property it is on is totally irrelevant to the situation at hand. The ground and foundation supporting this house must be permanently stabilized.

“There is no structural analysis of it other than Kartchner looked at it and said it’s going to be okay. We have to get serious about this situation. I want to see some definite solutions on how the ground and foundation supporting this house will be permanently stabilized. One that will last through the years.”

Conklin remarked, “I’m torn on making a decision. There’s no finalization of whose land it is. And, I do trust Kartchner. I have a hard time believing this house is going to collapse.”

After a brief executive session, a motion was made to allow Bovee to move back into her home, though she had 60 days to hire an engineer to provide a study of the foundation and the soil near the wall and design a permanent fix.

In an interview, MacKinnon said, “We’ll try to make it work. We’re happy they made the decision to let her go home.”

For now, she faces no fines in regard to Ward’s Nov. 30 letter, he added.