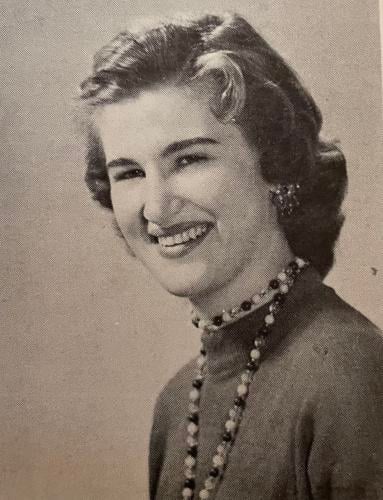 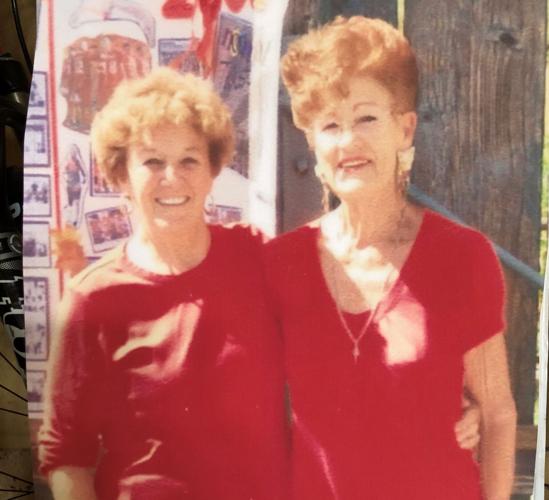 The lifelong friendship between Charlene 'Snoody' Borowiec, left, and Audrey 'Luche' Giacomino were diehard supporters for Bisbee's students and nonprofits. Borowiec passed away in December, Giacomino on May 2. 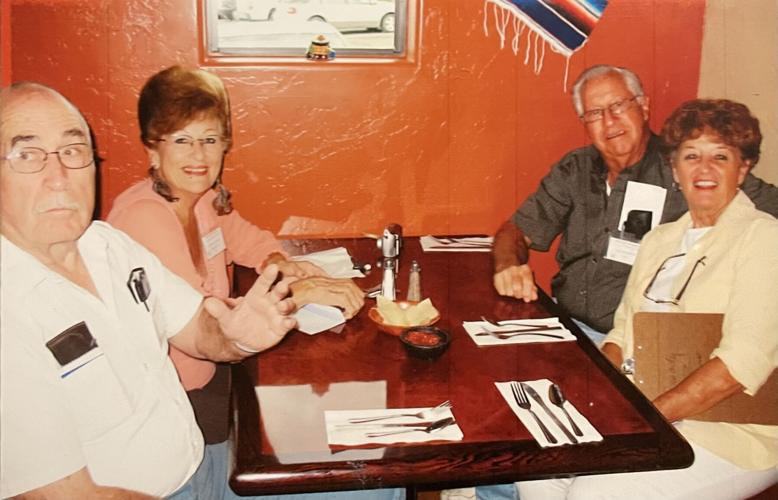 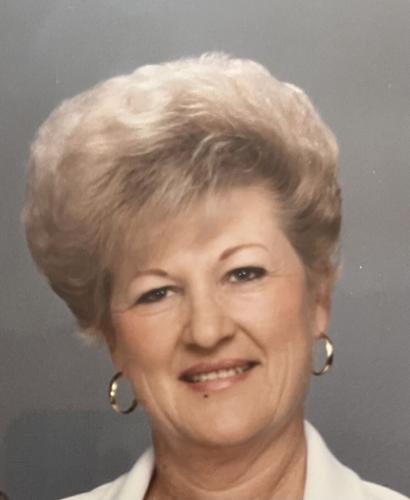 Audrey 'Luche' Giacomino, 84, passed away unexpectedly on May 2.

The lifelong friendship between Charlene 'Snoody' Borowiec, left, and Audrey 'Luche' Giacomino were diehard supporters for Bisbee's students and nonprofits. Borowiec passed away in December, Giacomino on May 2.

Audrey 'Luche' Giacomino, 84, passed away unexpectedly on May 2.

BISBEE — The mile high city lost another of its grand dames on May 2 with the unexpected death of Audrey “Luche” Giacomino, 84, who was active in the lives of students, a friend to nonprofits and Bisbee’s favorite baker of delectable delights.

She was born in Yorktown, Texas, to Gustav “Gus” and Laura Lee Audilett, who moved to Bisbee during the 1930s Dust Bowl.

“She became a proud citizen of Bisbee, a town she loved dearly until her parting day,” noted her daughter, Joni Giacomino.

She attended Bisbee schools where she met her husband of 66 years, Charles Giacomino.

She also met two of her lifelong friends, the late Charlene “Snoody” Borowiec, who died in December, and Carol Loy. Luche and Borowiec played basketball and baseball as the team traveled the state with coach Ray Parker.

Loy was “devastated” by the news of Luche’s death.

“Our history reached back to Greenway, through high school and then grew to a deep friendship when I moved back to Bisbee. Our connection grew stronger as we played, laughed, planned and worked together for Bisbee High School and for Bisbee.

“We had so many good times, from collecting record amounts of money at sporting events, planning alumni reunions, parties and dinners, and building the trophy cases. We worked on Kiwanis projects, like the track meet and the Kiwanis Club’s Mother’s Day Pancake breakfast, and Top Ten celebrations.

“Luche was a force to be reckoned with, a leader and a sight to behold when she was commandeering the BHS kitchen for making pancakes. A great cook, it was easier for her to do it herself than to show others how to do it ‘her way, aka the right way.’ It always turned out great.

“A constant advocate for Bisbee, she spent copious amounts of time and energy researching and fighting for the causes she believed would benefit her beloved town. When we served on the school board together we teamed up to educate groups, clubs, individuals and manned a booth at the farmers market to help pass the BUSD bond. We supported the Joint Technology Education classes that led our students directly to jobs.

“We did a lot more reminiscing the last few months when she would stop by on the way to locking the cemetery gates. I will miss her, her wit, her insights and her friendship. She truly did it ‘her way.’ ”

In 1955, Luche married the love of her life, Charles Giacomino, after a high school romance. They had a son, Charlie, in 1957 who passed away in 2010. Five years later, she gave birth to Joni.

“It brought her great joy,” she said.

Mayor Ken Budge announced her passing at the May 3 City Council meeting and gave her kudos for helping in his first term as a City Council member. He held a moment of silence to remember Luche.

City Manager Steve Pauken said she was his boss when he was hired for the first time in 2005 and he quickly found out she was a person he could count on. He explained how she stepped in when he suggested a hot dog barbecue for city employees and brought 30 pounds of ribs already cooked and, of course, her signature sheet cakes.

“It would be hard to find anybody who has touched more lives than Luche,” he added.

“No one else can ever fill her shoes,” she added.

Luche was one to never sit on her hands if someone needed help or something needed doing. Many of Bisbee’s nonprofits and school organizations were made richer by her delicious baked goods.

In fact, during the days of the annual cake auction benefitting the Little Red School House, which later became the Cochise County Association for the Handicapped, her sweet treats provoked bidding wars and brought in beaucoup cash. In a CCAH auction in 2012, she brought in $1,595 for her Grandma Giacomino’s fresh apple cake. Yes, her goodies were that good.

Joni said, “She exposed her children to the love of nature and animals welcoming turtles, snakes, alligators, baby javelinas and burrowing owls into the fold. Her house was known as the Giacomino Zoo to the kids in the neighborhood.”

Luche’s house was always a welcome point for the kids in the neighborhood as she offered food and even left a box of oranges on the front porch for them. She hosted many Halloween parties as well as sleepovers, Joni recalled.

Local politics attracted her attention and she ran and won a seat on the Bisbee Unified School District board and later a seat on the council representing Ward 2.

Joni said, “She was always there for the people of her ward and especially for the kids of Bisbee. She was instrumental in raising funds to get the Skate Park completed in Warren. She was liaison to the Youth Council, Parks and Recreation and the Evergreen Cemetery. Evergreen Cemetery was also near and dear to her heart and she worked hard to see that it had upkeep. She was the gatekeeper up until her passing.”

She was a lifelong supporter of Bisbee High School athletics and took tickets at games and cooked for special events. This lifelong commitment to community service and the importance of it was passed on to her children, said Joni.

Then there was her love of the Bisbee firefighters who received many a cake, pots of beans and jars of salsa to show her appreciation. At Thanksgiving and Christmas she donated food and toy drives.

“It was very fitting that they responded to the call and the family deeply appreciates that and would like to extend a heartfelt thank you to the crew that responded, especially to Justin Cline,” said Joni. “The care they provided was top notch, but most importantly it was compassionate and caring. Luche always thought that the Bisbee firefighters were the best firefighters in the world.”

Lisa Holland, daughter of Borowiec, saw Luche as her second mother just as Joni saw Borowiec as hers.

“I’m heartbroken,” Holland said. “She and my mother grew up together and our families lived over the hill from one another in Warren. Luche often watched my brother and me when we were little. Luche, Charles, my mom, and my dad were lifelong friends. Luche and Charles’ son, Charlie, was one of my brother’s best friends growing up and their daughter Joni was one of mine, and still is. To say our families were close and that we have shared life would be an understatement.

“I have so many fond memories of Luche and the whole Giacomino family that it would be difficult for me to list them all, but as I sit here and grieve Luche’s passing what reminds me most of her are the following things: great home cooked food any time of the day or night, gathering and canning peaches in the summer, Grandma Cookies and those amazing cakes ... music from the ‘50s, especially ‘The Stroll’ by The Diamonds, her fiery red hair, piercing eyes, fearless spirit, a generosity that knew no bounds and a willingness to volunteer to help others. Her unflinching ability to tell you the truth whether you wanted to hear it or not.

“Luche was one of my greatest supporters when I was a principal in Bisbee and remained a devoted mother figure and confident until the end. I can never thank her enough for that. In my mind’s eye, I will always see her standing by the Warren Ballpark gate taking tickets to the games, or cooking up something wonderful in her kitchen, or walking up the stairs at our family home on the end of Black Knob just to visit and have coffee.

“It is so difficult to lose loved ones, to lose family, and so it is for me in losing Luche. I am forever grateful for her care, love, and support. I will miss her more than I can express.”

In lieu of cards and flowers the family suggests “pay it forward with an act of kindness, volunteer, participate in community service, donate to the Bisbee firefighters, keep the cemetery clean or better yet go bake a cake for someone.”

A memorial for Luche has not been planned.