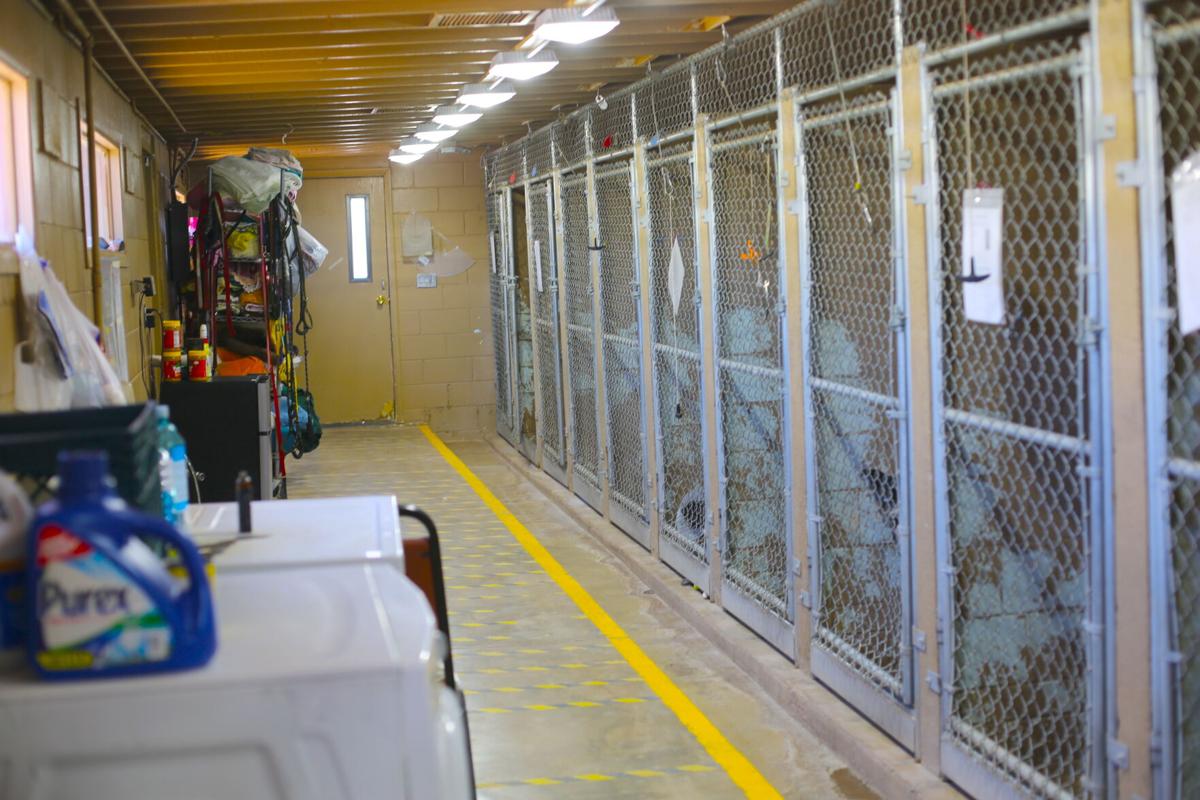 Bisbee Animal Shelter is operating out of "a small, cramped space," says one shelter worker. The old paint is peeling from the walls being washed everyday to keep the space clean and sanitary for the dogs that reside in the kennels. 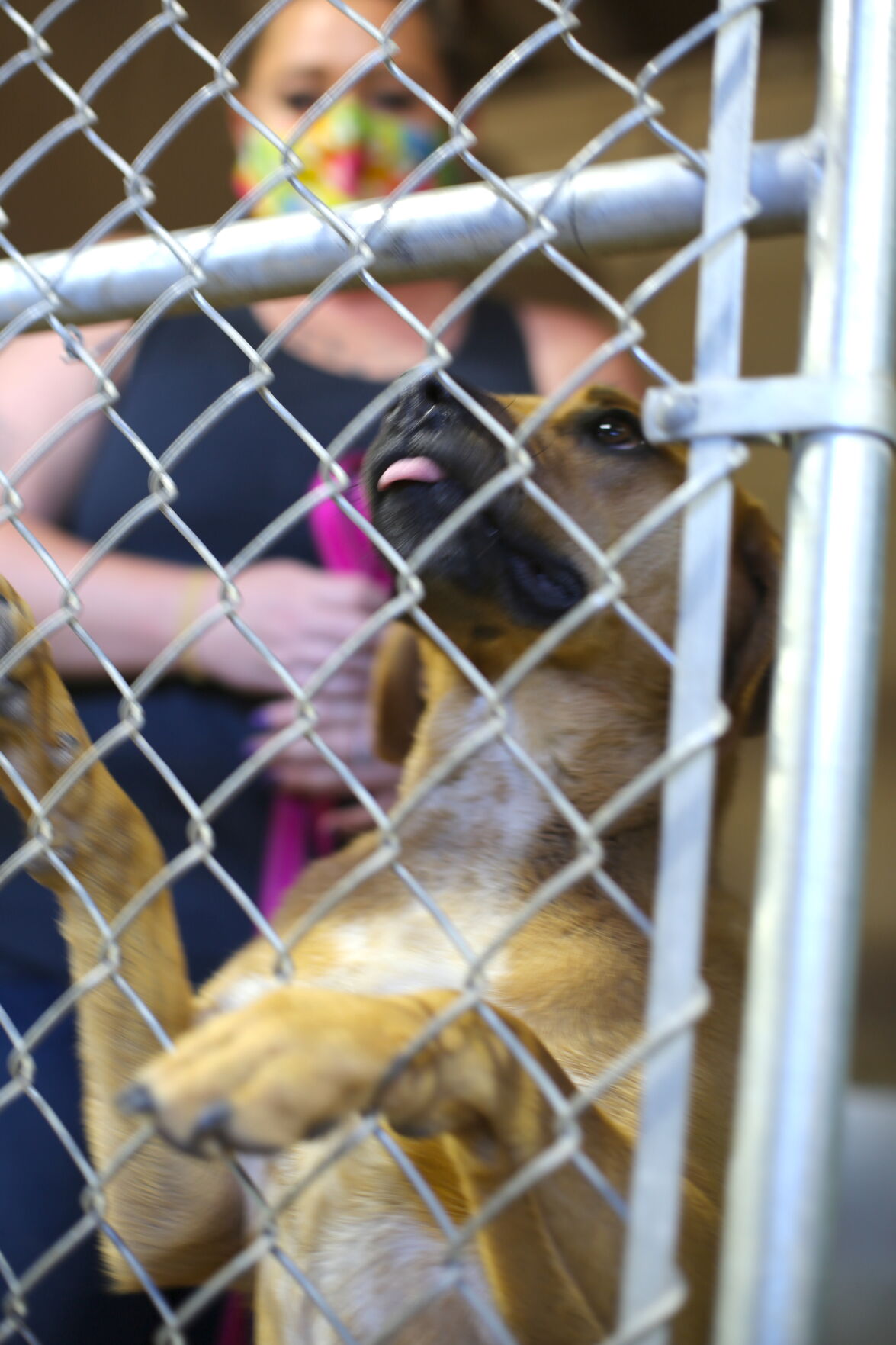 Bisbee Animal Shelter worker Jamie Schaffer helps a new dog get adjusted to a kennel on Thursday morning. Cochise County is considering entering an agreement with the Human Society of Southern Arizona to run an animal shelter in the former county building on Tovreaville Road. 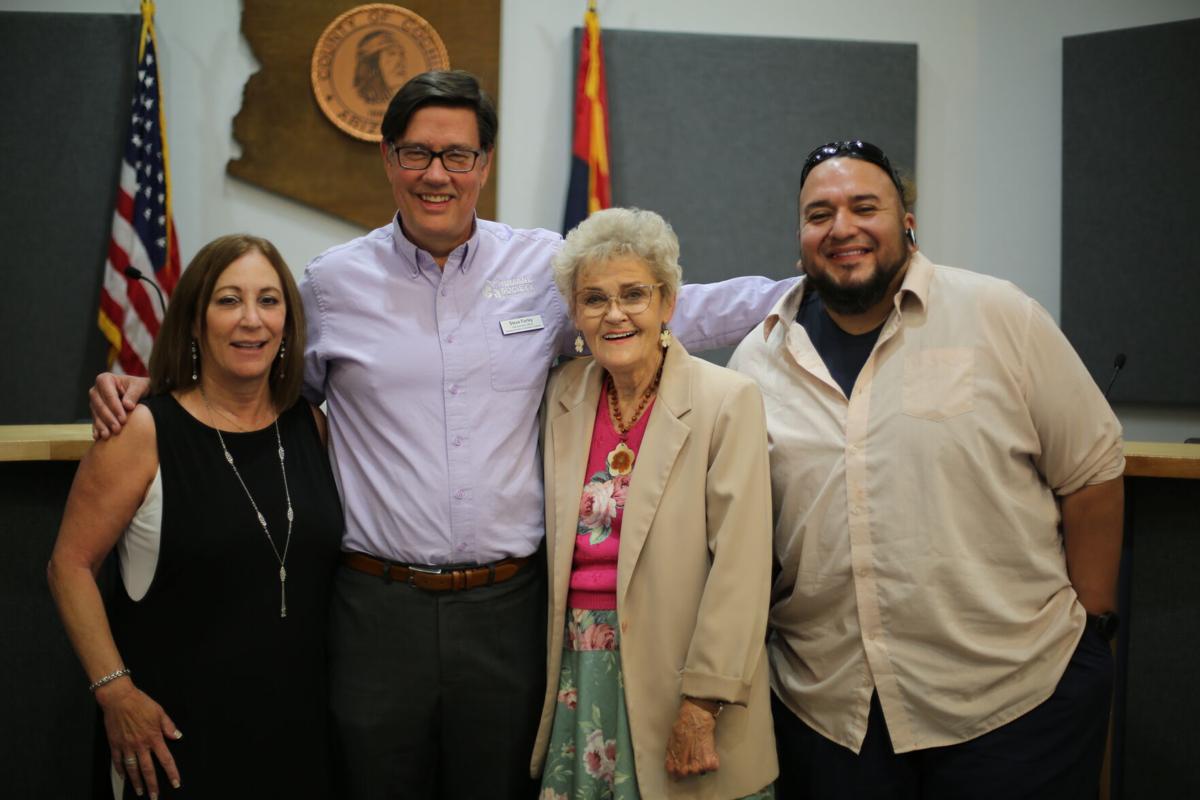 Bisbee Animal Shelter is operating out of "a small, cramped space," says one shelter worker. The old paint is peeling from the walls being washed everyday to keep the space clean and sanitary for the dogs that reside in the kennels.

Bisbee Animal Shelter worker Jamie Schaffer helps a new dog get adjusted to a kennel on Thursday morning. Cochise County is considering entering an agreement with the Human Society of Southern Arizona to run an animal shelter in the former county building on Tovreaville Road.

BISBEE — Cochise County may enter an agreement with the Humane Society of Southern Arizona to run a shelter in a former county building on Tovreaville Road in Bisbee.

During a work session Tuesday, Supervisors Ann English, Peggy Judd and Tom Crosby heard a presentation from HSSA CEO Steve Farley outlining the proposed $2 million project to remodel the old juvenile detention center into a state of the art veterinary clinic and animal shelter with 20 dog kennels and 30 cat kennels.

According to Sharon Gillman, associate county administrator, HHSA staff came from the Tucson headquarters and toured the existing Douglas Animal Shelter, the Bisbee Animal Shelter and the exterior of the proposed building.

Most recently, the city of Bisbee used the building for a city hall following the fire that destroyed its previous location on Arizona Street. However, there were issues with the electrical wiring that would have cost the city an estimated $40,000 to $50,000 to repair, as well as problems with the roof. The city moved out of the building in December.

Now, it looks as though the building may see new life as a county shelter with HSSA running it.

Farley explained the Douglas animal shelter was in need of renovation due to its “20 tiny indoor kennels” for the annual intake of 1,400 animals. The sheer number of animals led to a euthanasia rate of 70 percent of cats and 30 percent of dogs.

The University of Arizona Veterinary school took over control of the Douglas shelter and told Farley work would begin soon to bring the shelter up to par and a veterinary technician program would be started at the UA South campus in Douglas. Cochise College may also look to the providing the certification classes.

In Bisbee, Friends of the Bisbee Animal Shelter runs the shelter through funding from the city and through donations, Farley said. But the shelter does not have enough kennels to serve the city and the county. Friends was supportive of the possible county partnership with HSSA.

“By expanding comprehensive animal services to southern Arizona beyond Tucson, HSSA saves hundreds of lives each year while living up to its name in every way,” said Farley. “Total capital costs of $2 million could be paid by federal government, Cochise County and local donors. Operational costs could be paid by contracts with Bisbee, Douglas, Cochise County, program revenues and local donors.”

He estimated 10,000 animals could be saved from euthanasia in the first five years due to the broader base of HSSA volunteers and donors.

He pointed out the next steps would be for the Supervisors to approve an HSSA intake contract for the fiscal 2021–22 year. HSSA would purchase a van, train Cochise volunteers for weekly transport of Douglas pets to HSSA-Tucson main shelter while federal and other funding for building the county shelter was gathered. They would solicit national funding partners, write new grants and ask the county community at large to donate to the cause. Then, HSSA would work with the UoA College of Veterinary Medicine and other partners to fix the Douglas shelter and reestablish the Douglas clinic.

Once the county shelter is up and running, animals from Douglas that have met their 72–hour stay deadline for people to pick up lost pets could be transferred to the county facility by volunteers or even to the HSSA Tucson regional shelter for adoption.

By having the HSSA involved it would provide a larger pool of families looking to adopt a pet, he added.

Funding may be obtained from the federal government and the Supervisors agreed to ask U.S. Rep. Ann Kirkpatrick and Sen. Mark Kelly for the widely supported community project.

According to Mary Moran, an active volunteer in moving forward with a county shelter, there are more than 8,000 signatures on a petition to build the shelter and an online petition has garnered over 5,700 more.

English stated, “It helps us to have such a well known organization behind us. I’m positive we can work something out.”

Judd noted, “This is a brilliant plan. It’s a dream becoming a reality.”

Crosby asked if the shelter could be modular in case not all of the funding became available to fulfill the needs of the planned project.

Farley said, “We’re not going to ask the county for $1 million. You will just pay for the services provided. We hope for a federal appropriation, but we do have a great donor base and volunteer program. This helps us push our mission forward and truly be the Humane Society of Southern Arizona, not just Tucson. This could be a model template for other rural areas of the country.”

In an interview after the work session, Gillman said Judd contacted Farley as they both had served in the state legislature. When she saw he was now the CEO of HSSA, she contacted him. Moran was a former volunteer at the Huschuca City animal shelter before it closed. She has been active in seeking public support of a county shelter. Moran set up the tour with the HSSA.

The funding the county is hoping to acquire is from the next federal budget and members are permitted to request line items for community projects, explained Gillman.

“When I got the letter and looked at the requirements, I immediately thought of the shelter,” Gillman said. “We have strong community support. And even if the federal funding does not come through, the HSSA has a philanthropic reach that could help raise the money. This is the most positive development in a long time.”