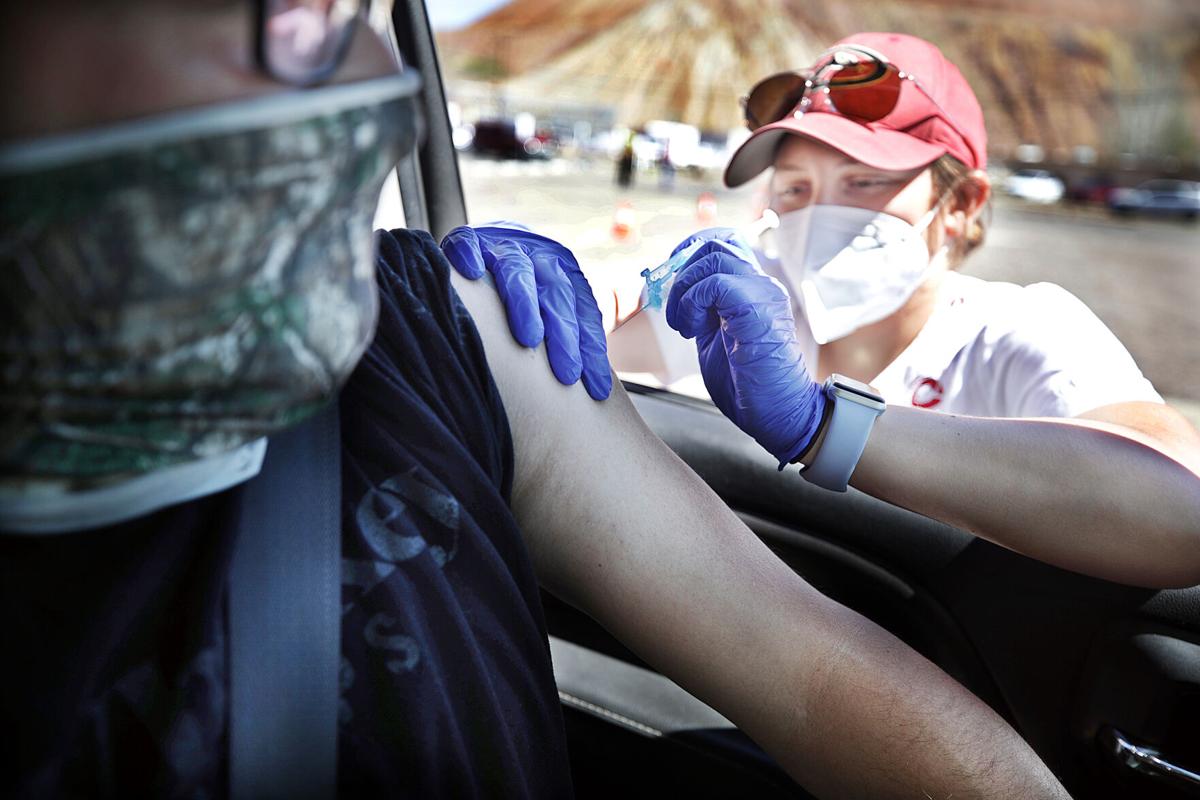 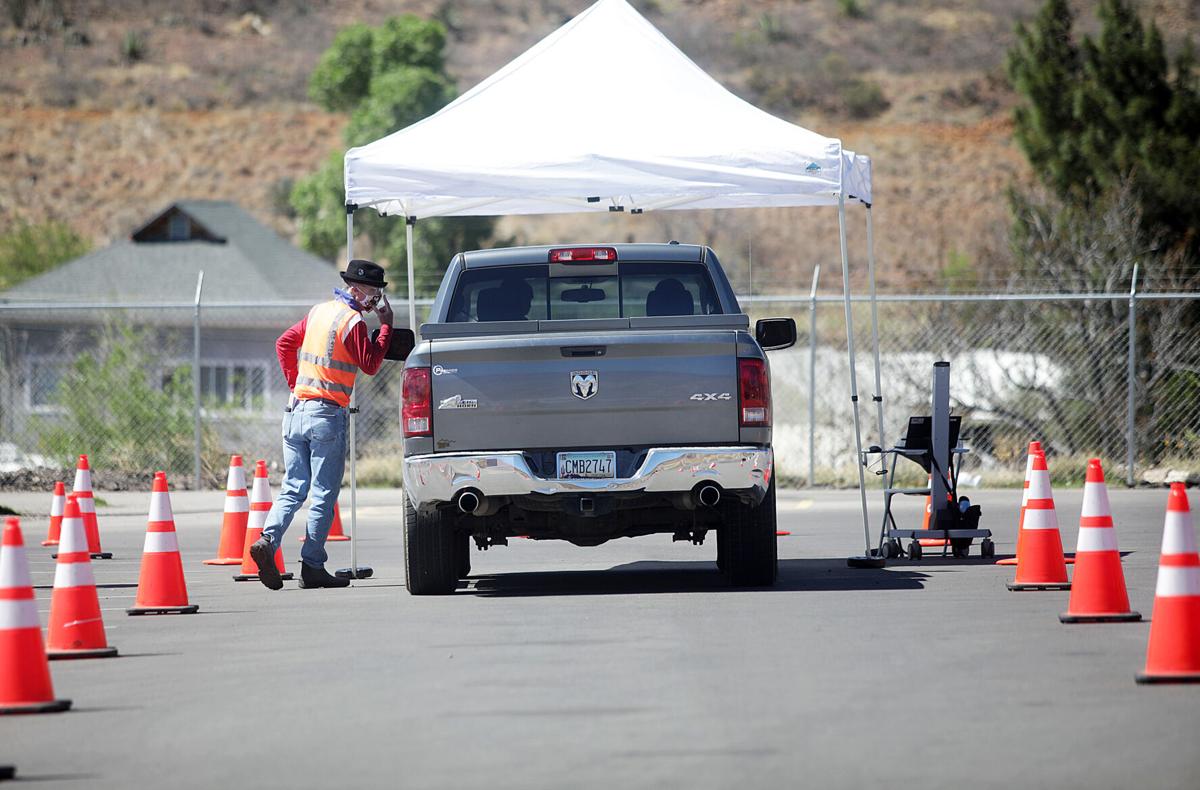 A driver waits for a vaccine shot Thursday morning. 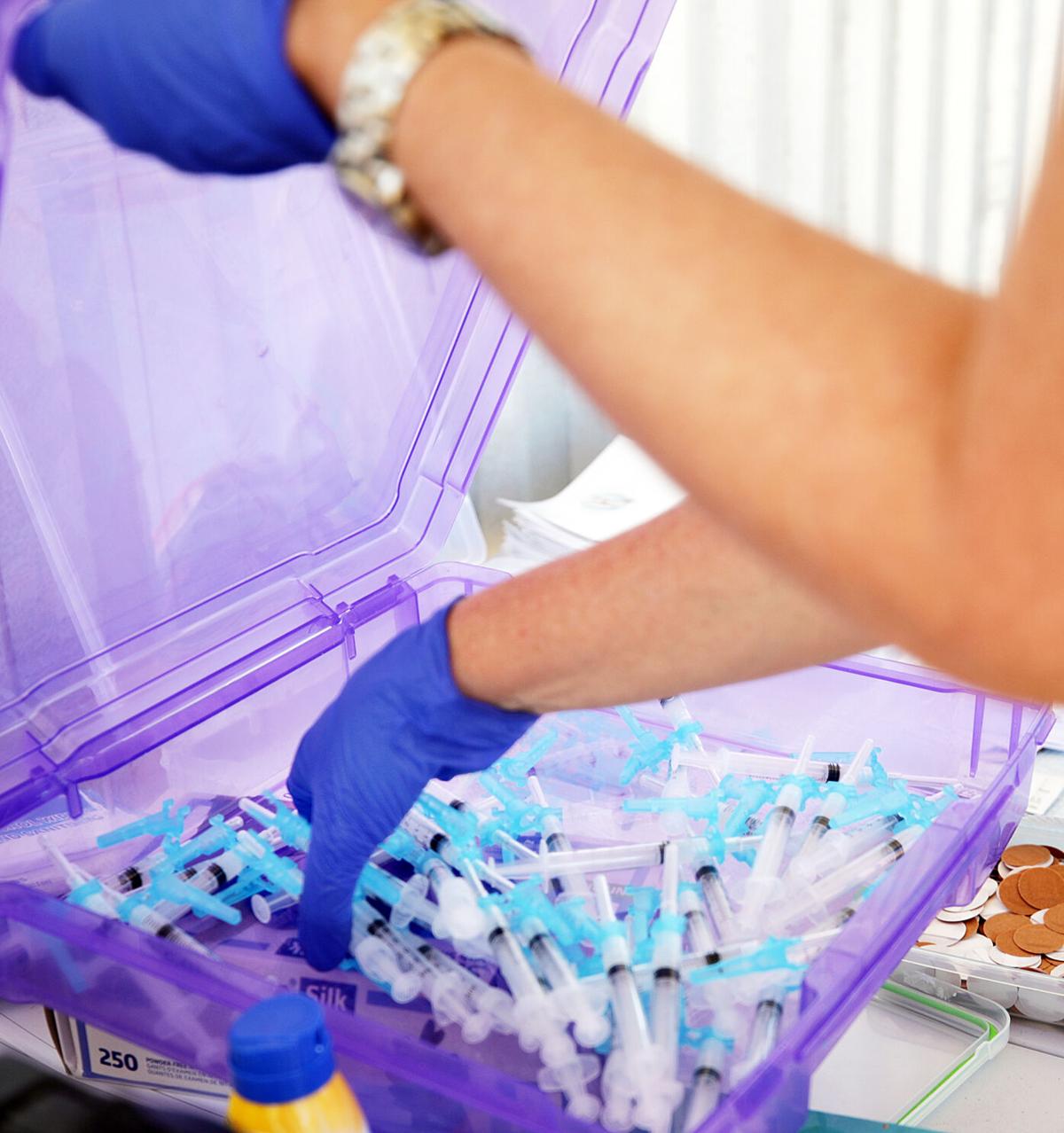 A fresh batch of syringes are being made ready for Thursday’s COVID-19 clinic in Bisbee.

The Copper Queen Community Hospital Rural Health Clinic provided vaccinations Thursday, with the Moderna vaccine in the morning and the Johnson & Johnson Janssen vaccine in the afternoon.

A driver waits for a vaccine shot Thursday morning.

A fresh batch of syringes are being made ready for Thursday’s COVID-19 clinic in Bisbee.

The Copper Queen Community Hospital Rural Health Clinic provided vaccinations Thursday, with the Moderna vaccine in the morning and the Johnson & Johnson Janssen vaccine in the afternoon.

COCHISE COUNTY — Health officials are saying a “vaccine hesitancy” seems to have settled over the county with several appointments for inoculations left unmet and more than 2,000 open slots over the area still available for anyone who is interested in getting a COVID-19 shot.

Cochise Health and Social Services Director Alicia Thompson said that as of Wednesday morning there were 2,019 “open appointments” for vaccines in Cochise County.

There are so many open slots that Thompson said Cochise County may open up its vaccine events to residents from other areas, which was unheard of.

Recently, 100 people were turned away from a vaccination event at Buena High School in Sierra Vista because the individuals were from other counties, Thompson said. Additionally, there was an incident at the county health department in Bisbee during which two people got angry and threw chairs in the lobby after they were turned away for a shot because they were not from Cochise County.

“This is our first week to see such a large number of appointments not filled,” Thompson said. “I am not sure what is driving the slowdown. We know that we are nowhere near the percentage of our population that needs to be vaccinated to push the pandemic back. We are assuming it is vaccine hesitancy, but don’t really have any hard data for that belief.”

Mark Savage, chief of the Fry Fire District, said he has seen a “reduction in demand” for the vaccines across Cochise County.

“I’m not sure if it’s people who still want the vaccine and are having hurdles getting appointments or if we’re saturating the group of people who are interested in getting it,” he said.

This is alarming not only to Thompson, but also to Dr. Edward J. Miller, the chief medical officer and COVID-19 incident commander for Copper Queen Community Hospital and Rural Health Clinics.

Miller said “to date” only 31.3 percent of the county has been inoculated. He shared some of his theories on why he thinks that number is low. They run the gamut from difficulty in registering for the vaccine to fears about how quickly the vaccines were developed. Miller also said some people are wary of needles and are afraid of side effects produced by the vaccines.

Because of state requirements, there was also an issue with publishing the location of actual inoculation venues in the county, Miller said, until vaccines were actually in hand.

“Until very recently, we were not allowed to put a point of dispensing in the state registration portal until we had the vaccines in our own freezers and the state wanted vaccines in arms within seven days,” Miller said in an email. “This meant very short notice for vaccine events.”

Miller said there also are people who don’t believe the virus was real, or think the vaccine will cause a change in a person’s DNA. Some people also are fearful that getting inoculated includes getting a tracking device inserted into them. Miller said in order to achieve herd immunity, a little more than double the county population— 65 percent— should be vaccinated.

“We really need more adults than that because children under 16 will remain a reservoir for this disease,” Miller said. “ ... Immunity is achieved in only two ways: infection or injection. Vaccination is always safer than COVID-19 infection. There remains only one valid medical reason for not getting the vaccine— an anaphylactic reaction to your first COVID vaccine.

“Fortunately, that has been extremely rare and I am not aware of any deaths in the U.S. from it. If you don’t like the way life has been the past year, get vaccinated. This pandemic will not end until herd immunity is achieved.”

These are the open slots available in Cochise County and the type of vaccines being offered:

Savage said there are 700 open appointments for the Moderna vaccine to be filled at Buena High School Saturday as well.

Anyone interested in getting vaccinated is asked to register at podvaccine.azdhs.gov; or call 844-542-8201.