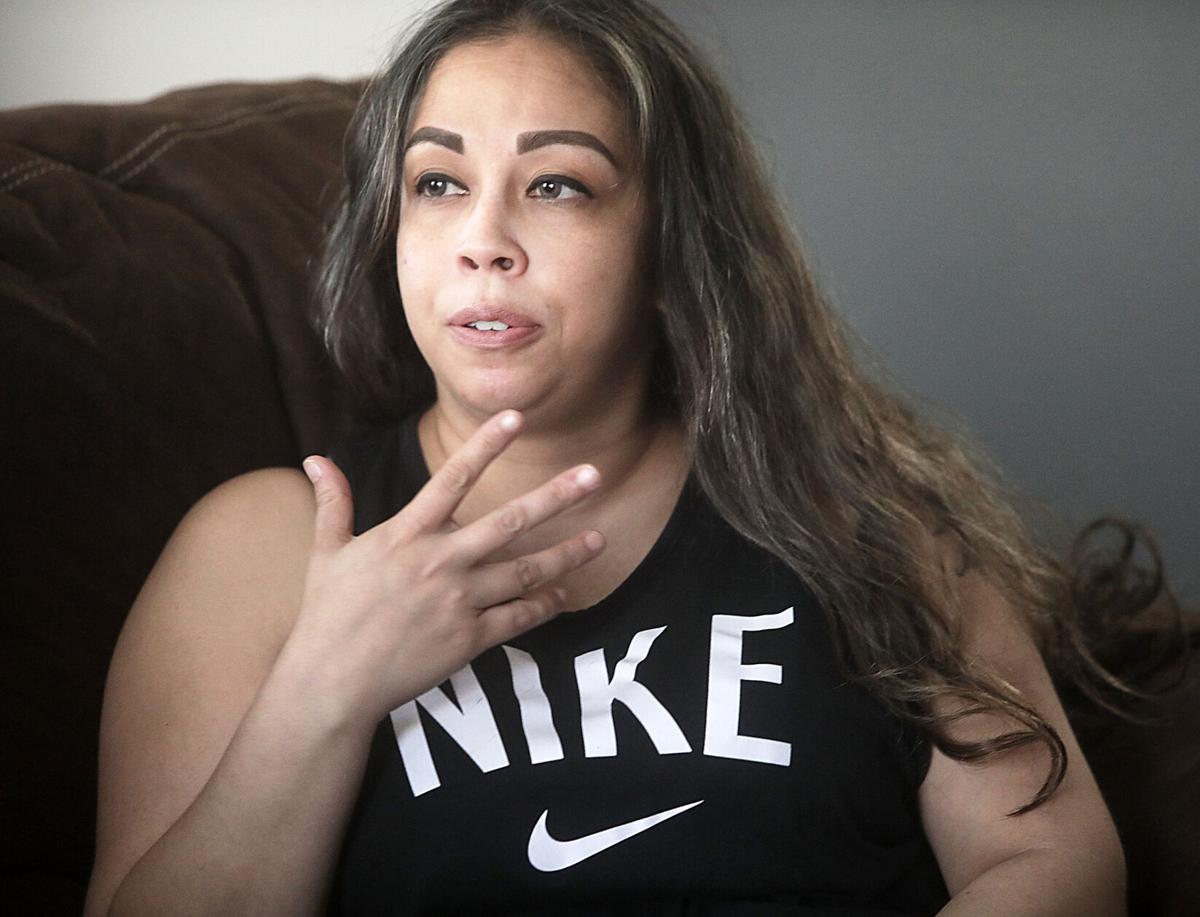 Mayra Munoz elaborates about a hit-and-run incident she was involved in along with her arrest by Bisbee police. 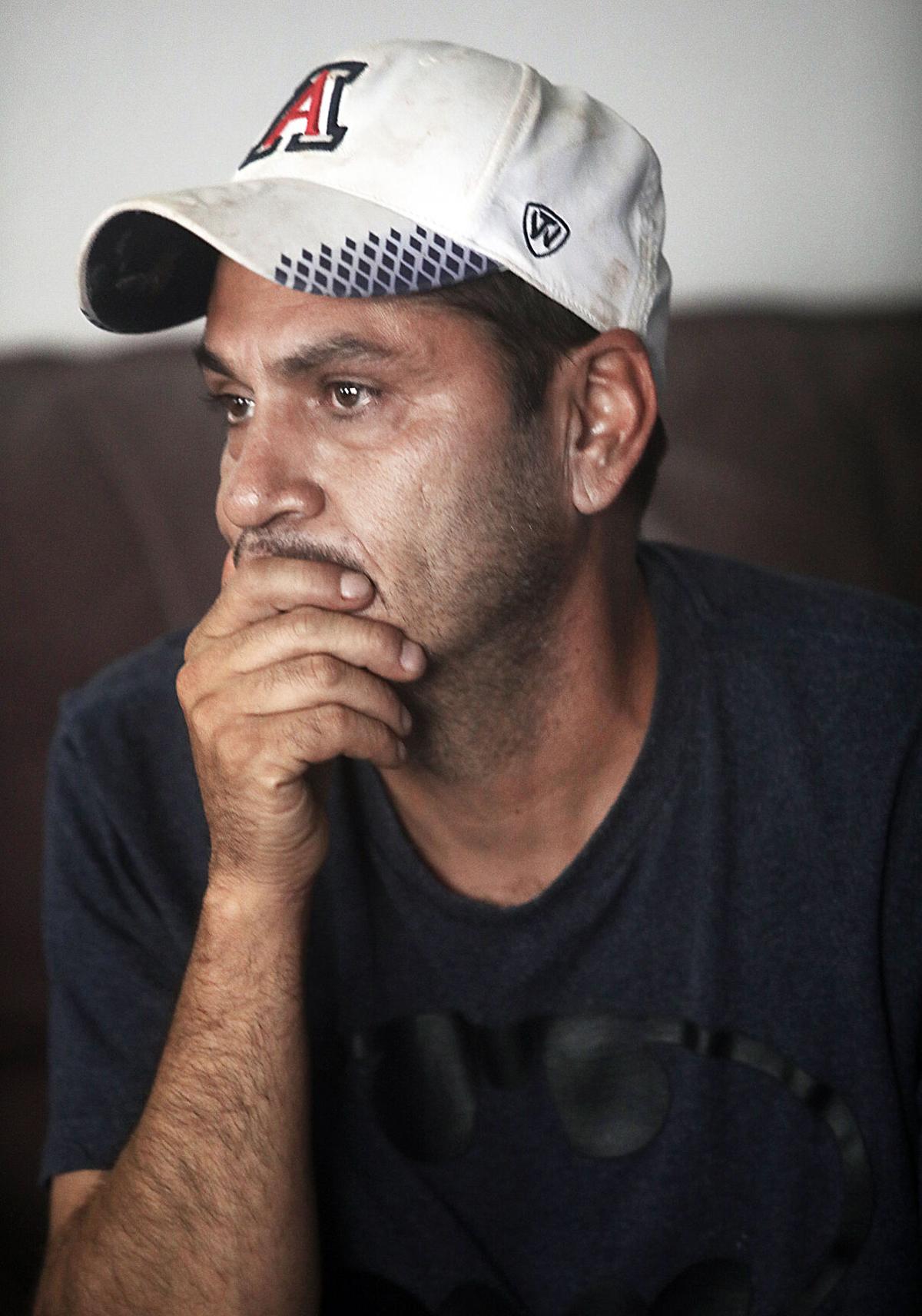 An emotional David Munoz listens while his wife Mayra talks about a traffic incident she was involved in recently.

Mayra Munoz elaborates about a hit-and-run incident she was involved in along with her arrest by Bisbee police.

An emotional David Munoz listens while his wife Mayra talks about a traffic incident she was involved in recently.

SIERRA VISTA — An employee with the Clerk of the Superior Court has been placed on administrative leave with pay after police said she was involved in a hit-and-run that injured a bicyclist.

The county employee, Mayra Munoz, has also been charged with kicking two Bisbee officers in the abdomen, a police report shows.

The case has been referred to the Cochise County Attorney’s Office and is under a felony review, police have said.

Wednesday afternoon, Tracey Romero, human resources director for the county’s judicial division, said Munoz is on paid administrative leave from her job as a court specialist in the Cochise County Clerk of the Superior Court’s Office at the courthouse.

“We are still reviewing things,” Romero said, but would not comment further.

Thursday afternoon, Munoz was summoned to the county’s offices in Sierra Vista and was given a notice of charges of misconduct in violation of the Judicial Merit System of the Superior Court of Arizona.

A letter signed by Clerk of the Court Amy Hunley informed Munoz that she could be fired from her job and has three days to respond to the charges lodged against her at work.

According to Sierra Vista Police, Munoz struck a bicyclist the morning of July 9 at Colonia de Salud and Highway 90, and drove away from the scene.

Munoz ended up being confronted by Bisbee Police because Sierra Vista authorities called ahead to alert them that a car fitting the description of Munoz’s 2016 Chevy had been involved in a hit-and-run crash and was traveling in their direction.

Munoz was heading east to her workplace at the courthouse when she was pulled over by two Bisbee officers on State Route 80, just west of the entrance to the Mule Pass Tunnel, Munoz said and records show.

Based on a her account as well as a report released by Bisbee Police on Thursday, the stop did not go smoothly.

The officers claim Munoz kicked them in the abdomen “numerous times.” Munoz said they tried to yank her out of the car by her wrists through the open window.

Before the scuffle erupted, officers said they asked Munoz to step outside the car and she refused. Munoz said she refused because she was scared and she had no idea why they had stopped her.

Before arriving in Bisbee that morning, Munoz, who lives in Sierra Vista, left her house and turned left onto Colonia De Salud. She reached Highway 90 and turned right in order to head east toward Bisbee.

Munoz said she looked in the mirror to see if any cars were behind her and she moved into the next lane. At that moment she was startled when something hit her driver’s side mirror, bending it inward against the car.

Munoz said she looked in the rearview mirror to see if anything hit her vehicle, but saw nothing. She opened the driver’s side window to straighten her driver’s side mirror and said she saw nothing on the road. She did notice a dent on the rear driver’s side door and called her husband as she continued driving.

“She asked me how the dent had gotten there and told me something had hit her mirror,” David Munoz told the Herald/Review. “I told her our daughter had used the car the night before and maybe something had happened.”

Munoz’s next call to her husband would be a more urgent one after she was stopped by Bisbee Police officers.

“I could hear police yelling at her in the background,” David Munoz said. “I told my wife to pass the phone to one of the officers so I could ask what was going on. The officer told me my wife had been involved in a hit-and-run accident in Sierra Vista.”

Sierra Vista Police spokesman Corp. Scott Borgstadt said Munoz struck a cyclist at the crosswalk at Avenida de Salud and Highway 90. Borgstadt said the cyclist was riding east on 90 and was crossing the crosswalk. When Munoz turned right to head east, she hit him.

“He was in the process of crossing,” Borgstadt said. “She is required by law to stop and make sure she didn’t hit something, especially a person or an animal.

“She didn’t do that, she kept going. She was cited for a misdemeanor, but because the bicyclist was injured, the case has been sent to the county attorney.”

Borgstadt said Bisbee Police were alerted because the cyclist was injured and the driver of the Chevy Impala had driven off.

One of the two officers who stopped Munoz walked toward her car with his “duty weapon at his side due to the nature of the call,” the report says. The policeman said he ordered the driver to roll down the rear window and when he saw it was a female alone in the car, he put his gun away.

At that point the officer ordered the driver to step out of the Chevy and she refused, the report says. He repeated the order and stated that the woman in the car was “getting frantic.”

Munoz told the Herald/Review and a Bisbee Police supervisor that she wanted to know what she had done wrong before getting out of her vehicle.

That’s when the stop turned physical.

The officer stated in the report that he “attempted to physically remove the female by grabbing her wrists as (another officer) tried to open the driver’s side door to assist.”

At her residence Thursday, holding back tears and shaking slightly, Munoz said the officers tried to pull her 4-foot-11-inch frame from the car through the open driver’s side window.

She said she broke free and fell back on the car seat and was fumbling for her cell phone so she could call her husband.

The Bisbee officers said Munoz grabbed her court identification and yelled that she works for “the (expletive) court.”

They also said that when they opened the driver’s side door, she started kicking them. One of the policemen pulled out his stun gun and pointed it at Munoz, the report shows.

The police supervisor at the scene later told Munoz that one of the officers had a shoe mark imprinted on his shirt in the chest area. Munoz said that’s because they were trying to drag her out of the Chevy by her feet.

Police said they realized Munoz was on her cell phone with her husband and that it seemed he was calming her. The officers told Munoz to put her husband on speaker phone and they told him she had been involved in a hit and run in Sierra Vista.

Munoz said she had no idea she had hit a bicyclist with her car that morning.

“I would have stopped if I had done that,” said Munoz, a mother of four children. “I had no idea.”

Munoz said she and her husband have since spoken to the bicyclist.

“I apologized to him, I told him I didn’t know I had hit him,” she said. “They told me he had a cracked pelvis. We’re very sorry this happened.”

As for what’s next, Munoz said she is waiting to see what happens with her job and whether the county attorney’s office files felony charges against her.

“I don’t have any kind of a criminal record,” Munoz said. “Whatever happens, I do want people to know how (Bisbee) police acted. It’s not OK. They should not be treating people that way.”