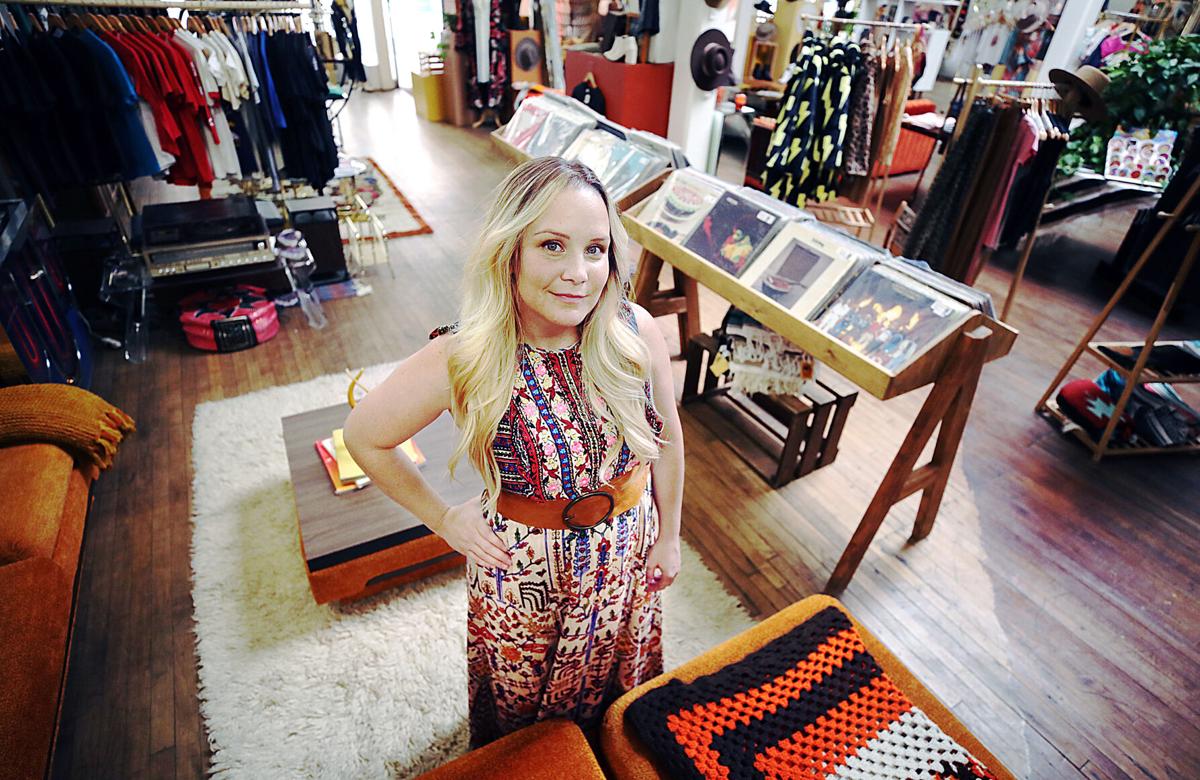 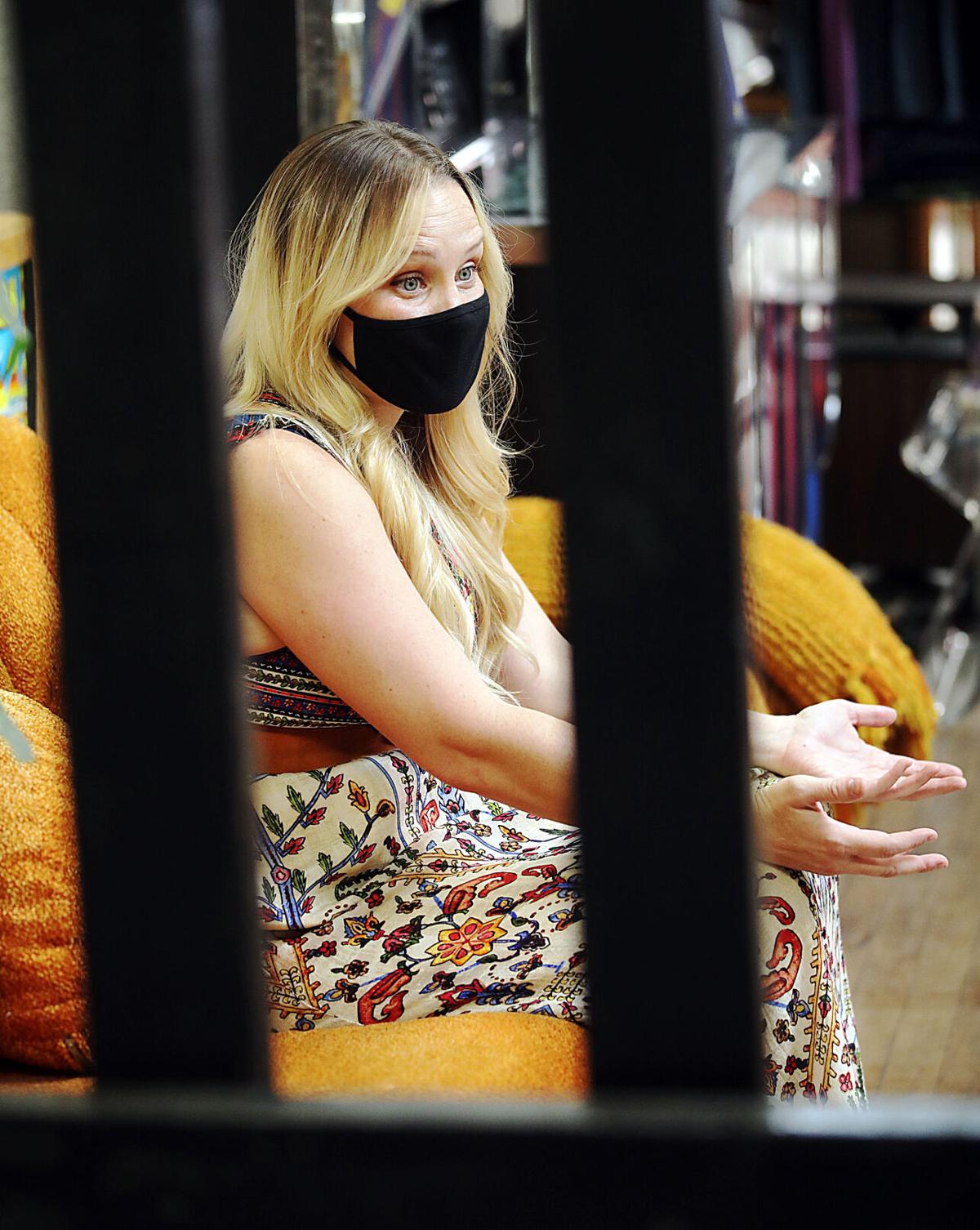 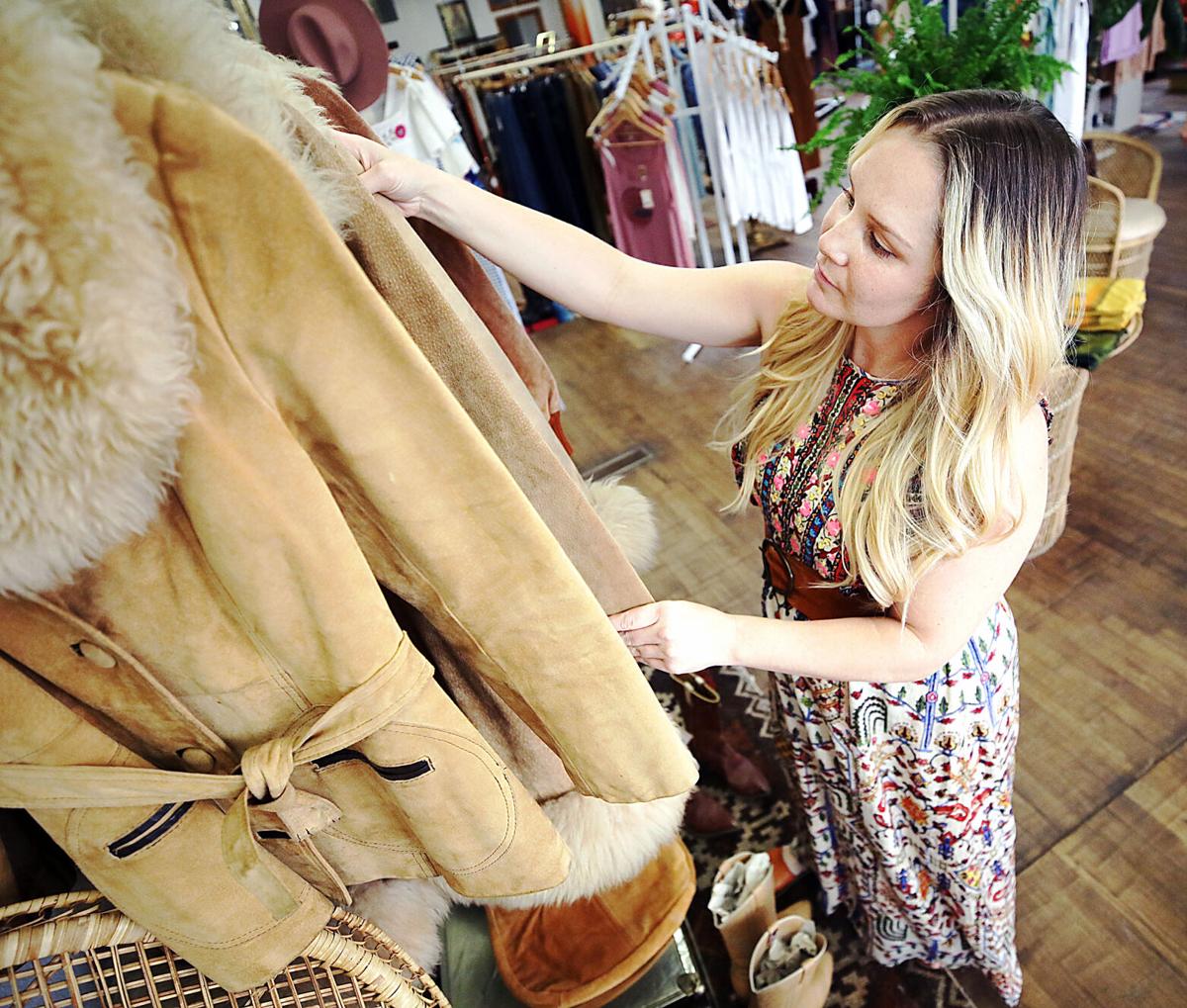 Claire Harlin straightens out some of the jackets in her store.

Claire Harlin straightens out some of the jackets in her store.

BISBEE — As soon as you walk in the door, you instantly realize this store is something special as its racks of vintage, ‘70s style fashions catch your eye and the tunes on the old-timey jukebox catch your ears.

This is not your typical 21st century store. Back in the ‘70s, it was a J.C. Penney store, one of the largest department stores on Main Street.

“This is so exciting. I’ve always loved this space,” said Classic Rock Couture founder, designer, seamstress and owner Claire Harlin, who opened the store over Labor Day weekend. “I said if I ever wanted a space of my own, it would be this store on Main Street.”

She has tried to keep the floor plan as similar to the old Penney’s store as possible. There’s a men’s section, women’s section, jewelry and perfume counter, boot section, furniture and general housewares section. The racks of ‘70s styles invite a trip down memory lane for the older folks and for those younger who find the retro trend enticing. Vintage posters and prints decorate the walls.

Thanks to a friend who told her about a couch for sale in Warren, she has a 1970s living room setting that was purchased at the old J.C. Penney store. The modernistic rust-colored couch, settee and coffee table provide the perfect hangout for husbands who wait for their wives to shop. They can listen to music from 50 years ago or peruse Harlin’s generous collection of LPs covering rock, western and other genres. As in days long gone, one can even listen to an album before it is bought.

“They can hear what the album sounds like before they buy it, or just listen to what we have playing,” she noted. “I just want them to have a good time. I feel I’ve done my job if people go to a different place while they’re here.”

The second floor is her shipping department, which has been busy since she offered her first design that garnered the attention of celebrities and people around the world. Singers Sean Lennon, Miley Cyrus, Elle King, lead vocalist of the Midland Band Mark Wystrach and actors Alicia Silverstone and Cobie Smulders, a former “Stumptown” star, are a few of her well-known customers.

“Cobie beat up people wearing my jacket in the series,” Harlin said. “And Mark held my jacket up during a concert, I was told.”

The design is of a vintage, well-fitted, fabric bomber jacket with a western-style yoke on the front and a multicolored sun ray design on the back. Though anyone who sees the jacket would think it is modeled after the Arizona State Flag, she said it is not.

“It was a design I had long before we moved here,” she said. “People call it the unofficial Arizona jacket. It has a very flattering fit. And it’s not just for young people. Anyone can wear this jacket.”

The style, which comes in numerous colors and sizes, has become very popular and is such a best seller there is a waiting list of three to four months for the jackets.

It was not an easy design, she explained. Getting a tight fit, but not too tight, was often a challenge. After six months she was ready to put the first jackets out in the market in a pre-sale to try to recover her costs for those long hours. She had no capital when she began and needed to bring in some income.

“It worked. They were quickly sold out and I had orders for more,” she said.

She pointed out she does not consider herself a fashion designer.

“I don’t think I’m cool enough to be a fashion designer. Even when I go to the trade shows I don’t feel like I’m in the industry. I’m always glad I can come back to Bisbee and do my thing here.”

She opened a site on Etsy that gave her more exposure and several thousand new customers over the years. She has made 16,270 sales on Etsy since 2013. The site continues to add to her customer base.

Now, with her Bisbee store open, she is enjoying the walk-in customers who have fun browsing through memorabilia of times past, like her rare, rock band T-shirt rack.

Many of the items offered are from things she herself collected over 20 years, finding inspiration in her mother’s ‘70s clothing and styles.

In addition to the new store, Harlin also has a 5-month-old daughter named Hazel, who she brings to work with her now and again, rotating off 18-month-old Winnie.

The girls’ father, Justin Luria, runs the Shady Dell and Dot’s Diner, both of which are doing well, Harlin said.

“The girls are so sweet,” she added. “As busy as we are, we always find time for them.”