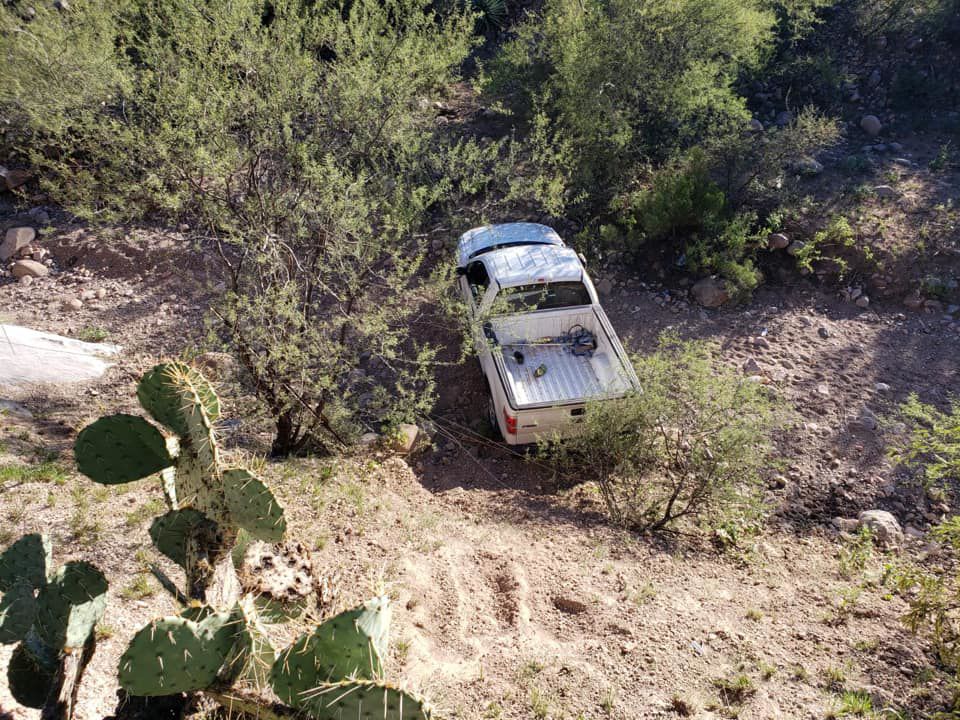 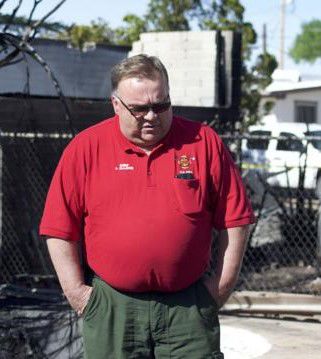 BISBEE — Former Huachuca City Fire Chief Jon Andrew Allmon was involved in a single-vehicle crash Tuesday afternoon as he headed east on Highway 90 to his sentencing hearing in Bisbee.

Allmon’s white pick-up truck slid off the road just west of where Highways 90 and 80 intersect. He careened 50 feet down into a ravine, Arizona Department of Public Safety officials said.

Department of Public Safety spokesman Bart Graves said witnesses heard a man honking his vehicle horn. They tried to help him out of the truck, Graves said.

“The vehicle was 200 feet from the road and about 50 feet down a ravine,” Graves said. Allmon had to be lifted from the vehicle, he said.

Graves said Allmon was flown to University Medical Center Tucson with unknown injuries. Highway 90 was closed for a period of time Tuesday night as crews extracted the truck, Cochise County said on its Facebook page.

Allmon was scheduled to appear before Cochise County Superior Court Judge James Conlogue at 3 p.m. Tuesday to be sentenced on two counts of theft. He pleaded guilty last December to stealing from the Huachuca Fire Club and from the town itself.

He was arrested in October 2017 following an investigation by the Sierra Vista Police Department. Allmon was later indicted by a county grand jury on nine felony counts involving theft and trafficking in stolen property. His crimes occurred between December 2016 and October 2017, the indictment shows.

In one instance, Allmon sold an extraction tool belonging to the town to the Naco Fire Department. Before that, he also sold three trailers, an extension ladder and a radio to private individuals, the indictment shows. He pleaded guilty to two thefts this past December.

This is the third time Allmon’s sentencing is delayed.

Allmon was supposed to be sentenced on Sept. 30, but the hearing was continued after he failed to show up with the $23,900 restitution check he owes the town. The initial sentencing date had been set for Sept. 23, but was continued for an unknown reason.

Last week, prosecutor Michael Powell told the Herald/Review that Allmon would face a longer prison term if he did not show up Tuesday with the restitution money. If he did bring the check, he would face between 12 and 21 months in prison. If he did not bring the money, he could go to prison for up to 45 months, or 3.75 years, Powell said.

At the courthouse, Conlogue asked about Allmon’s whereabouts at least twice, prompting Allmon’s attorney Xochitl Orozco to retreat into a jury room for several minutes. Prosecutor Jason Lindstrom, told the Herald/Review that Allmon had been in a crash after Orozco came back to the courtroom.

Orozco did not say publicly that her client had been in a wreck. She declined comment after the hearing. The only thing she would say in the courtroom is that Allmon’s “involuntary” absence was confirmed by the Arizona Department of Public Safety.

Conlogue told the attorneys that he wants a status report on Allmon’s condition by Oct. 18.

“Let’s be optimistic and reset the sentencing for Nov. 12,” the judge said.

In the meantime, the Department of Public Safety will be investigating “how the vehicle went off the road,” Graves said.