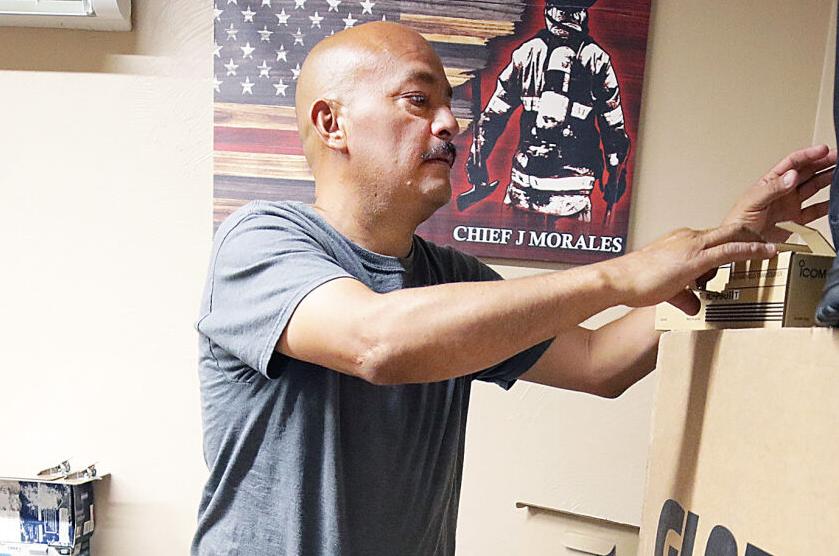 Naco Fire District Chief Jesse Morales inspects some of the new turnout gear and radios the agency received through a $57,000 grant. 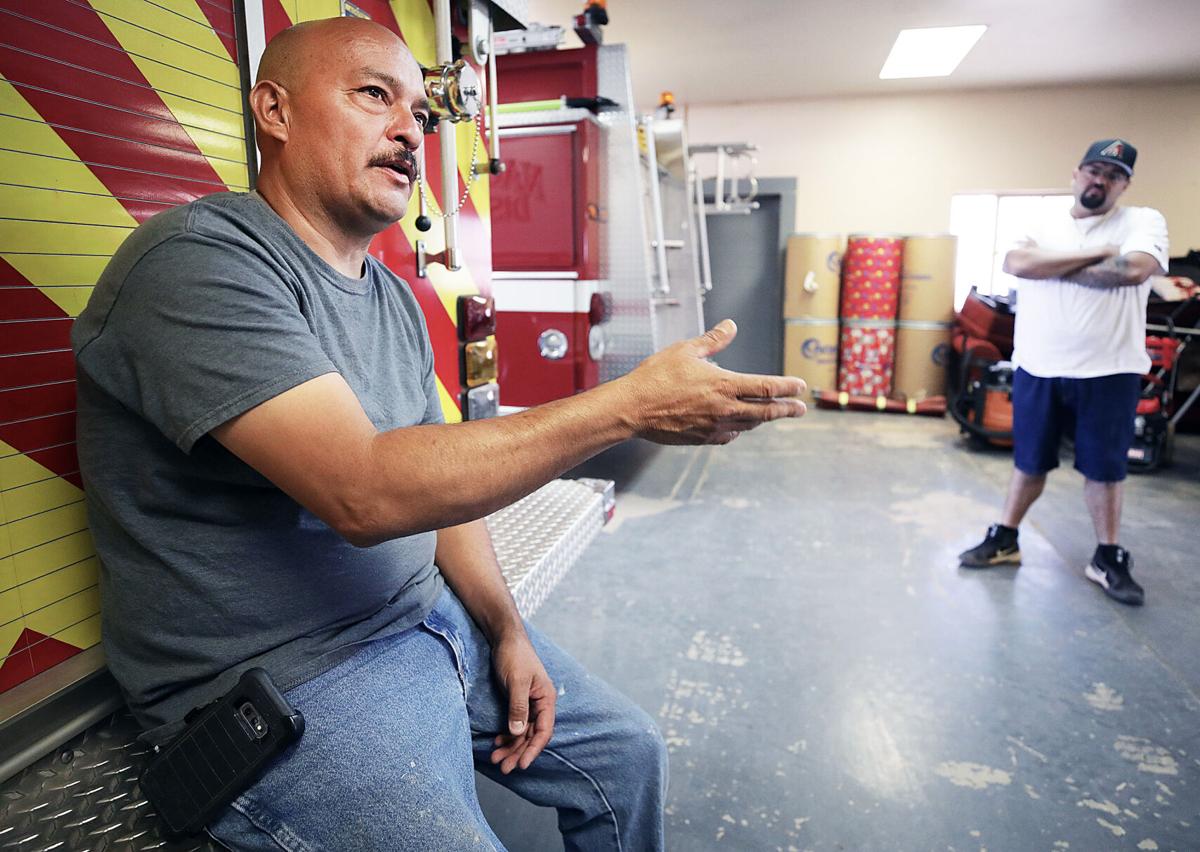 The Naco Fire District is donating some of their dated equipment to some departments in Sonora, Mexico. Naco  Chief Jesse Morales has ties to the Mexican firefighters. 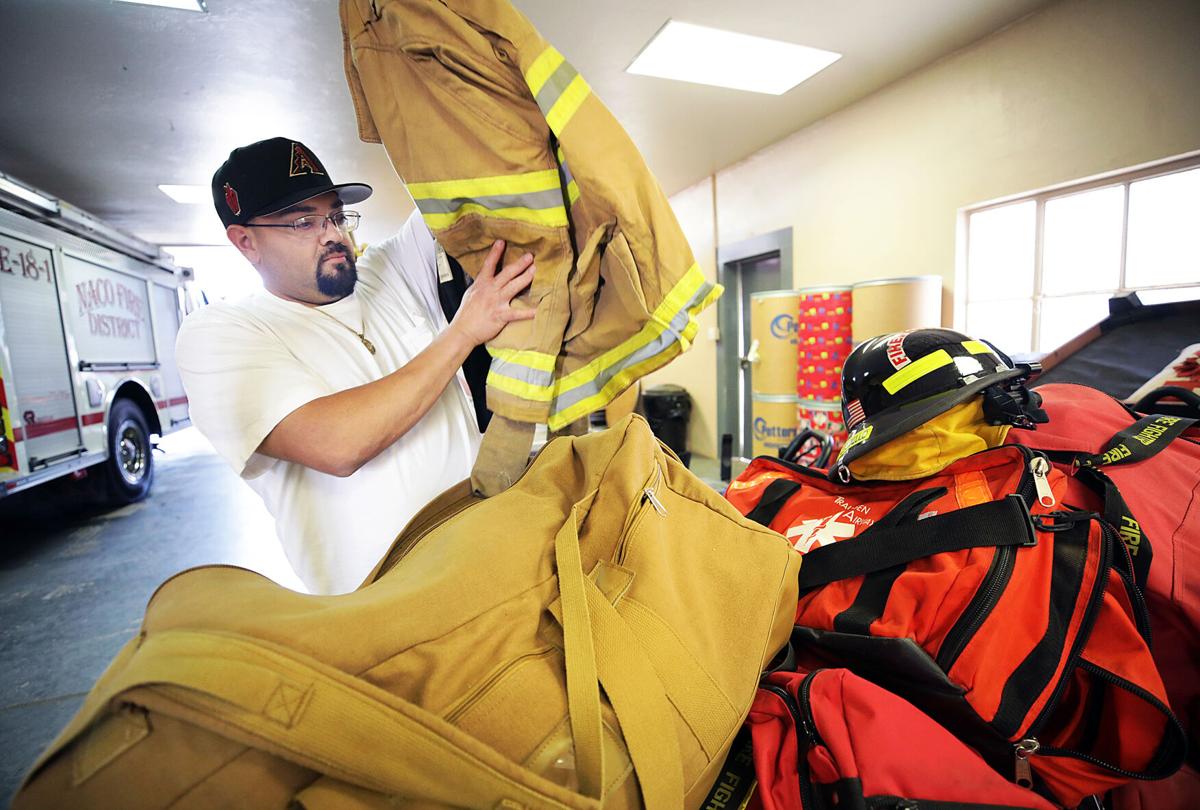 Naco Fire District volunteer firefighter Gustavo Campillo looks through some of the items the district will be donating to fledgling fire departments in Sonora. Campillo is also a member of the Bisbee Fire Department. 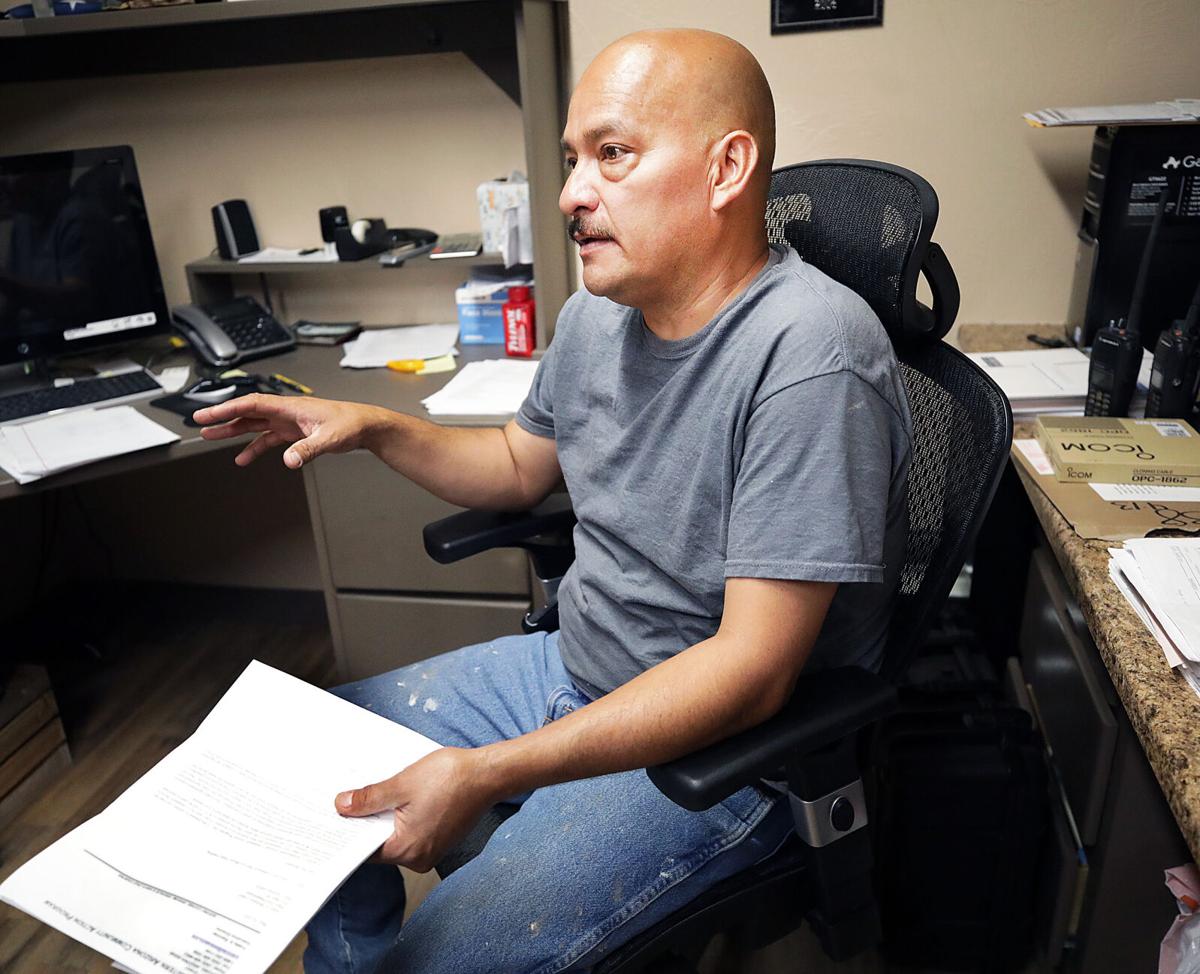 Naco Fire District Chief Jesse Morales inspects some of the new turnout gear and radios the agency received through a $57,000 grant.

The Naco Fire District is donating some of their dated equipment to some departments in Sonora, Mexico. Naco  Chief Jesse Morales has ties to the Mexican firefighters.

Naco Fire District volunteer firefighter Gustavo Campillo looks through some of the items the district will be donating to fledgling fire departments in Sonora. Campillo is also a member of the Bisbee Fire Department.

NACO — A $57,000 gift from a generous benefactor has allowed the volunteer fire department here to purchase new gear and radios that were long overdue.

The old turnout gear and hand-held radios no longer in use by the Naco Fire District are heading to smaller fledgling fire departments in the Sonora state in Mexico, said Naco Fire Chief Jesse Morales.

“We started seeing the need from the smaller departments in the southern part of Sonora state,” Morales said Friday. “I think what we’re going to do is start focusing on the smaller fire departments.”

Morales mentioned the towns of Montezuma, Huepac and Bacoachi in Sonora state. He said his family hails from Bacoachi and he’d like to see their fire department get on its feet. Morales, who is also fire chief for the Naco, Sonora, fire department, has helped garner equipment for that volunteer agency as well.

Giving used equipment to smaller fire and police departments in need in Sonora, Mexico, is an act that has long been in practice by the Naco Fire District and other agencies in the area. Bisbee police and fire, as well as the Fry Fire District and Sierra Vista Fire, have each donated gear and equipment — even police cars and an ambulance— to their Sonoran counterparts, Morales said.

Gustavo Campillo, a Bisbee firefighter and a Naco volunteer firefighter who is Morales’ younger brother, said the two Nacos and Bisbee are close-knit.

“We all help each other out,” Campillo said. “It’s good that we can all be on the same side of things.”

He said the gift of $57,137.60 given to the Naco Fire District for 12 new turnout gear suits and 14 new radios, came from the Southeastern Arizona Community Action Program in Safford.

The company’s gift to the Naco Fire District, Morales said, helped boost the department’s ISO rating because of the new equipment. ISO stands for International Organization for Standardization.

Morales’ father — also a volunteer firefighter for Naco Fire — and the weatherization supervisor at SEACAP, helped secure the money from the company after he and Morales discussed the Naco Fire department’s need for the new gear and radios.

The turnout gear being replaced is about a decade old, Morales said, and the radios are over 15 years old. Morales was thinking of applying for state and federal grants to get the money, but the grant process takes several months, he said.

The price tag for turnout gear has jumped since Naco Fire purchased the ones they have now. A turnout gear jacket and pants are about $800 apiece, while a pair of boots can cost up to $500. The cost of a new radio and charger runs about $1,350.

Naco Fire survives on a percentage of the property taxes collected by Cochise County, as well as a portion of the fire district assistance tax collected by the state, Morales said.

“We do fundraising and we try to get a little bit of money here and there for equipment,” Morales said.

Morales thought SEACAP’s offer would cover the purchase of a few turnout gear sets and a few radios, but instead the organization purchased everything they needed, and then some.

“At first we thought they were going to get six to eight sets of turnout gear. But they said they would buy them all,” Morales said. “We were looking to get 12 radios and they bought us 14.”

Ramirez said that because of COVID-19, SEACAP “was allocated additional funds in SFY21 (July 1, 2020 — June 30, 2021) to provided assistance to community organizations and/or agencies that provide their communities with services.”

“Two of SEACAP’s employees volunteer at the Naco Fire Department and I overheard them talking about their personal gear and communication equipment needing to be upgraded in order for them to meet the county codes to stay in operation,” Ramirez said in an email. “I immediately knew that this would be an excellent project to be funded with the money we received.

“This money is from the Community Service Block Grant CARES ACT Fund. Community Service Block Grant funds must be spent on projects that will benefit the entire community. What better than assisting a fire department meet the necessary county codes to be able to maintain their ability to continue to provide the much needed emergency services for the Naco community and surrounding areas? Our board of directors was completely behind the idea and supported it unanimously.”