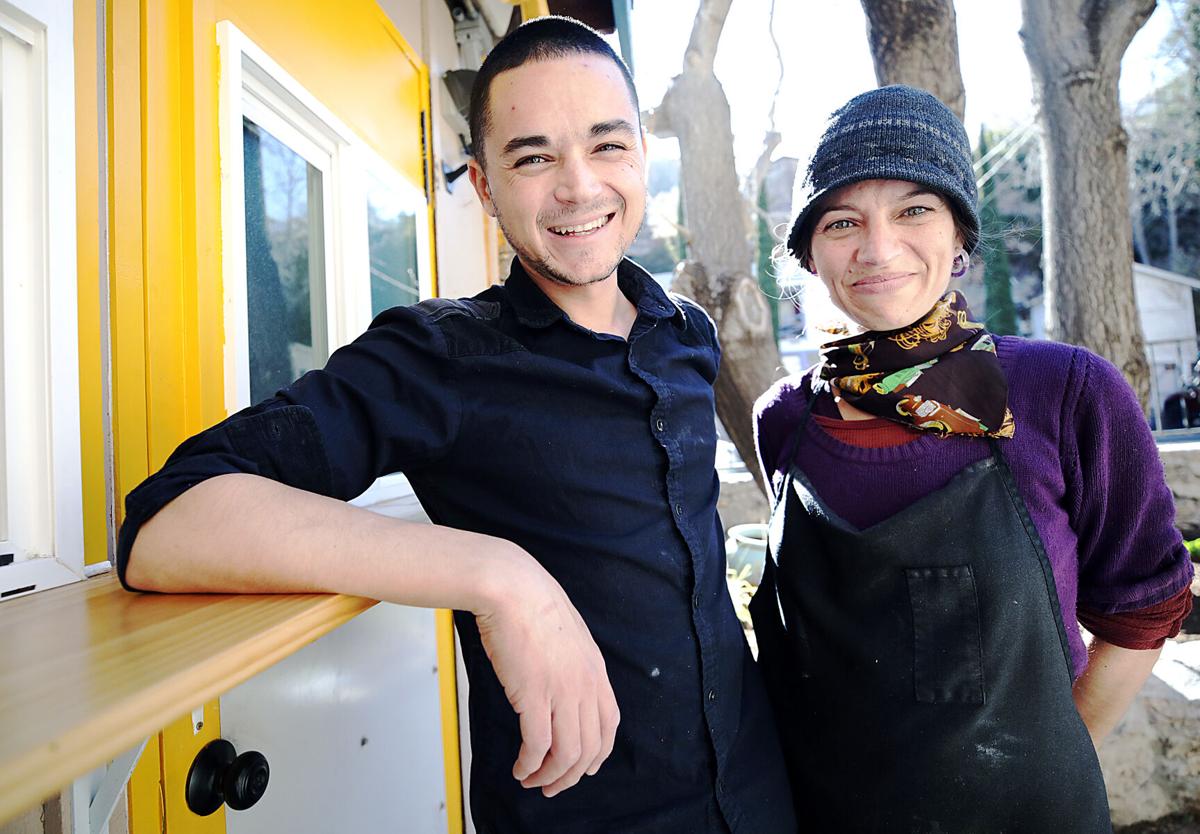 On the Vedge restaurant co-owners Mike Donahue and Katie Hartman have recently opened their sumptuous eatery located on Main Street in Old Bisbee. The restaurant has been open since Dec. 23. 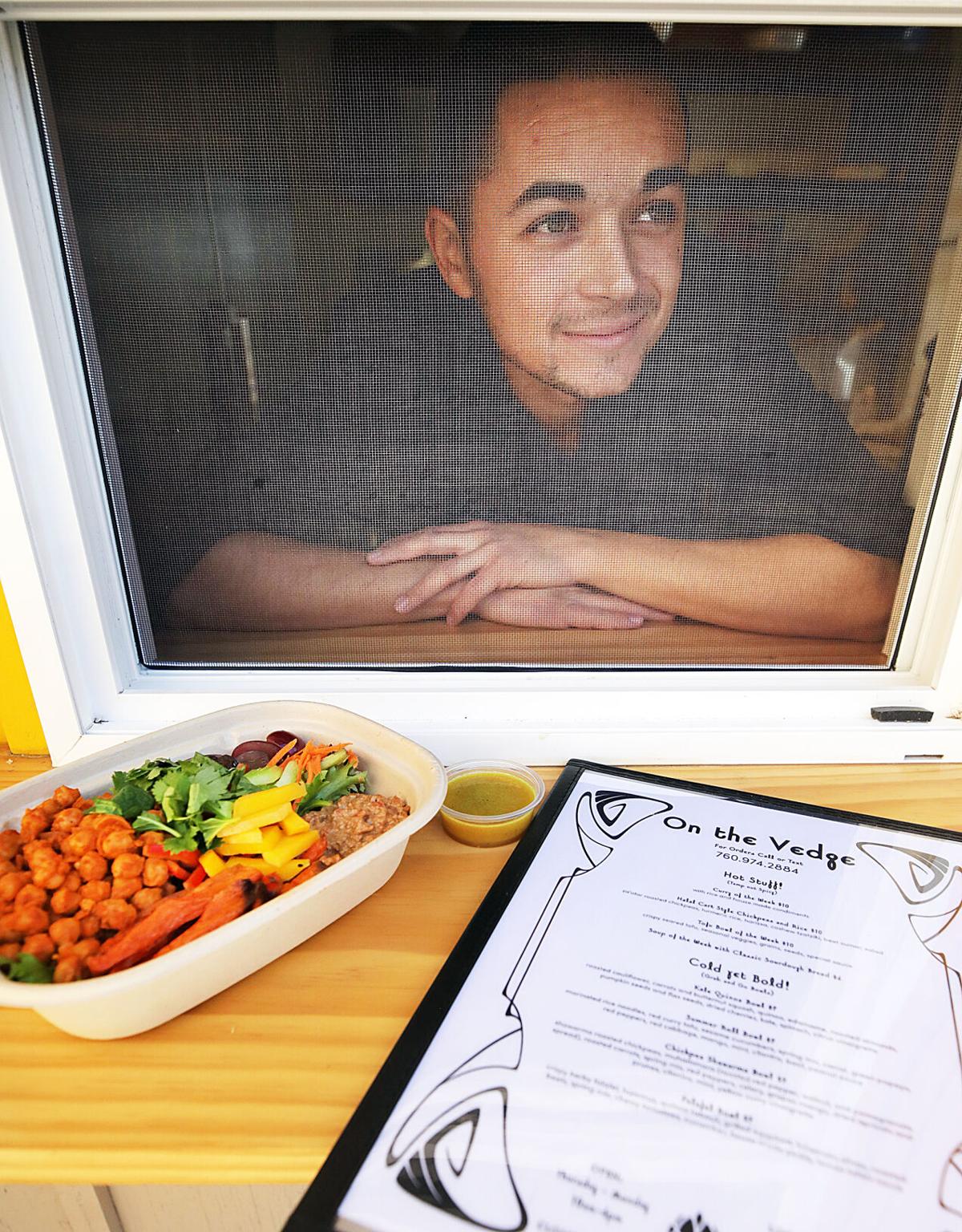 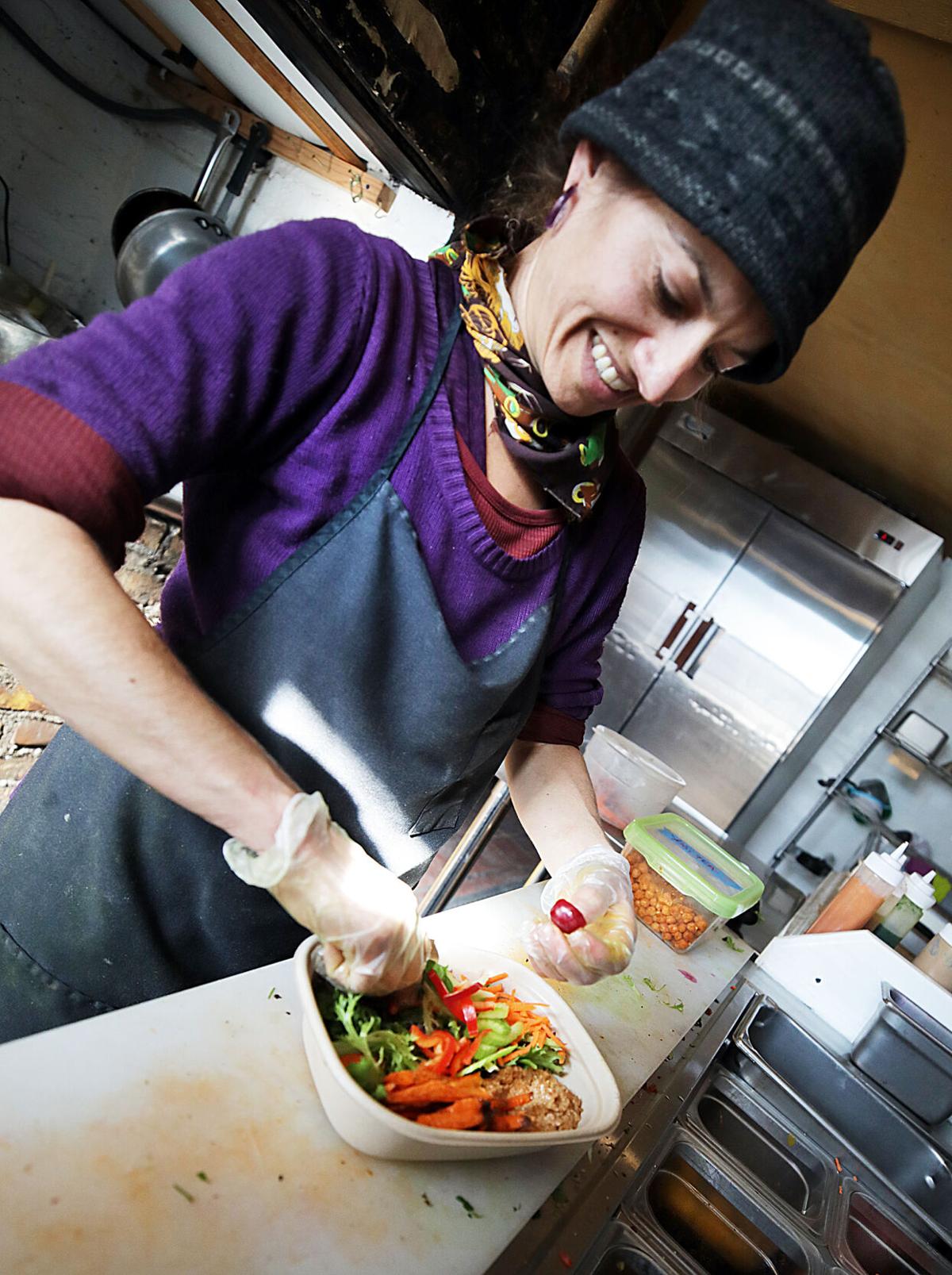 On the Vedge co-owner Katie Hartman prepares a chickpea shawarma dish in the new establishment’s kitchen.

On the Vedge restaurant co-owners Mike Donahue and Katie Hartman have recently opened their sumptuous eatery located on Main Street in Old Bisbee. The restaurant has been open since Dec. 23.

On the Vedge co-owner Katie Hartman prepares a chickpea shawarma dish in the new establishment’s kitchen.

BISBEE — On the Vedge restaurant opened Dec. 23 and already it is a townie favorite serving up non–GMO organic veggies, homemade breads, sauces and dressings in a tiny kitchen, even by Bisbee standards, by native Bisbeeite Mike Donahue and his new partner Katie Hartman.

“We’ve run out food twice already,” exclaimed an excited Donahue. “We’re not overly worried about building our business. We have good food, affordable prices and people keep coming back for more. The response has been amazing. We want to warm people’s stomachs and put smiles on their faces.”

On the Vedge, at the base of Castle Rock, serves Middle Eastern and Mediterranean cuisine made by Hartman, a pre–COVID–19 caterer. She brings a mass of knowledge of herbs and spices and adds her own pizazz, which provides unique flavors to the salads, sandwiches and wraps they offer.

Her curries change weekly and many people have come back to see just what she has up her sleeve, which apparently could be an endless repertoire of tasty pleasures by the look of her sophic smile.

“I have so many ideas,” she hinted.

As one who has traveled the country and the world providing vegan food at yoga retreats and festivals, she has brought tastes from all over to their restaurant.

Donahue calls it a “global menu.”

They met at the Bisbee Farmers Market. She was selling vegan cookies and he sold vegan food.

“We didn’t think twice about it,” he said. “We knew the building was available and we just did it on the fly. We couldn’t be more excited. We were both more than ready to do this.”

As a Bisbee native and as a man who has worked at various places around town in various jobs for years from bartending to shuttling people around for the Bisbee Tour Company, he knew lots of people who not only gave him their verbal support but customer support as well. Some of his old skateboard buddies come around a few times a week to get the now very popular Indian samosas, a curried potato pastry with cashew coconut chutney.

Another favorite during these cold days is a delectable little warming treat called chickpea shawarma — chickpeas rolled in a special recipe which includes a bit of hot chili pepper. Hartman serves it in a salad of the same name in a bowl of special salad greens and fruit with a delicious, warming cashew raita sauce and homemade vinaigrette.

Donahue knows the food is good because they do not find their food dumped in the trash cans.

He said, ”Usually, you’ll find a lot of food dumped in the trash at restaurants. Not here. If people can’t eat it all, they take it home with them.”

Trash is a consideration, so they serve their dishes in commercially compostable takeout boxes.

“Our packaging won’t last 100 years in a landfill. We’re trying to do our part to produce as little waste as possible,” he said. “We want our carbon footprint to be as small as possible.”

Donahue calls their offerings “comfort food” and wants everyone to know how good going vegan can be not just for health, but for those hard-to-please taste buds.

Hartman is a whiz with herbs and spices and comes up with new creations she enjoys sharing with her clientele.

Donahue said, “People have no imagination. They just think of every meal with meat. We show them how good vegan tastes. Our Mideastern cuisine with hummus and curry and fresh herbs and veggies gives people the opportunity to experience good vegan food.”

He says the menu will be adjusted seasonally as different fruits and vegetables ripen through the year.

They are planning to grow as many of their own herbs and veggies as they can and use local growers as much as possible even though Donahue knows that adds to the cost. He sees the need to help support locals as important to his business, but also to the city economy. There is a Bisbee man who is providing them with fresh mushrooms, as much as 20 pounds a week.

Garden beds are ready for spring planting and at the restaurant they already have some root crops growing.

Thanks to COVID–19, there is no indoor seating. Donahue and Hartman want to be responsible business owners, respect the guidelines and protect their customers.

People can pick up their orders at an outdoor window on the pleasant rock patio to eat on the few tables set about, or take to a hotel room or home and enjoy.

Looking for something new for lunch or dinner in Bisbee? Put On the Vedge on the list.