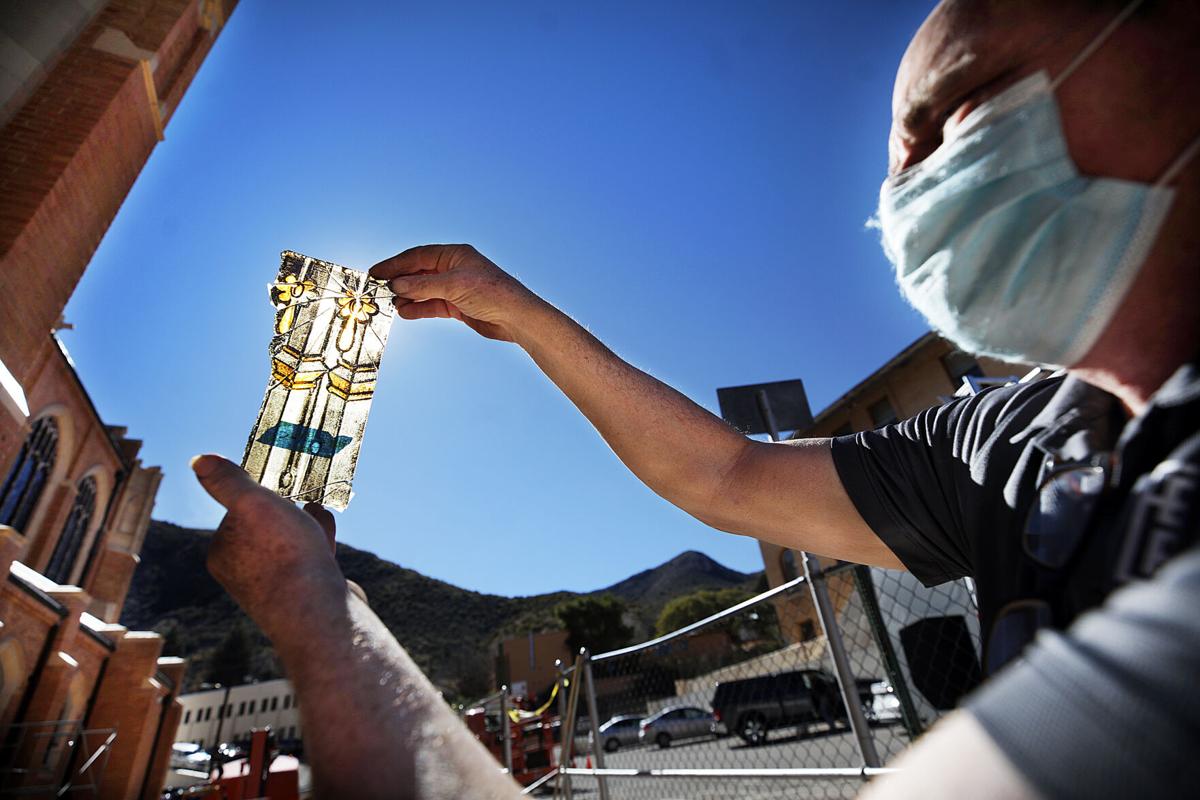 Emil Frei and Associates' Stephen Frei holds a small portion of stained glass to be duplicated as part of the restoration project at Bisbee's St. Patrick Church Thursday. 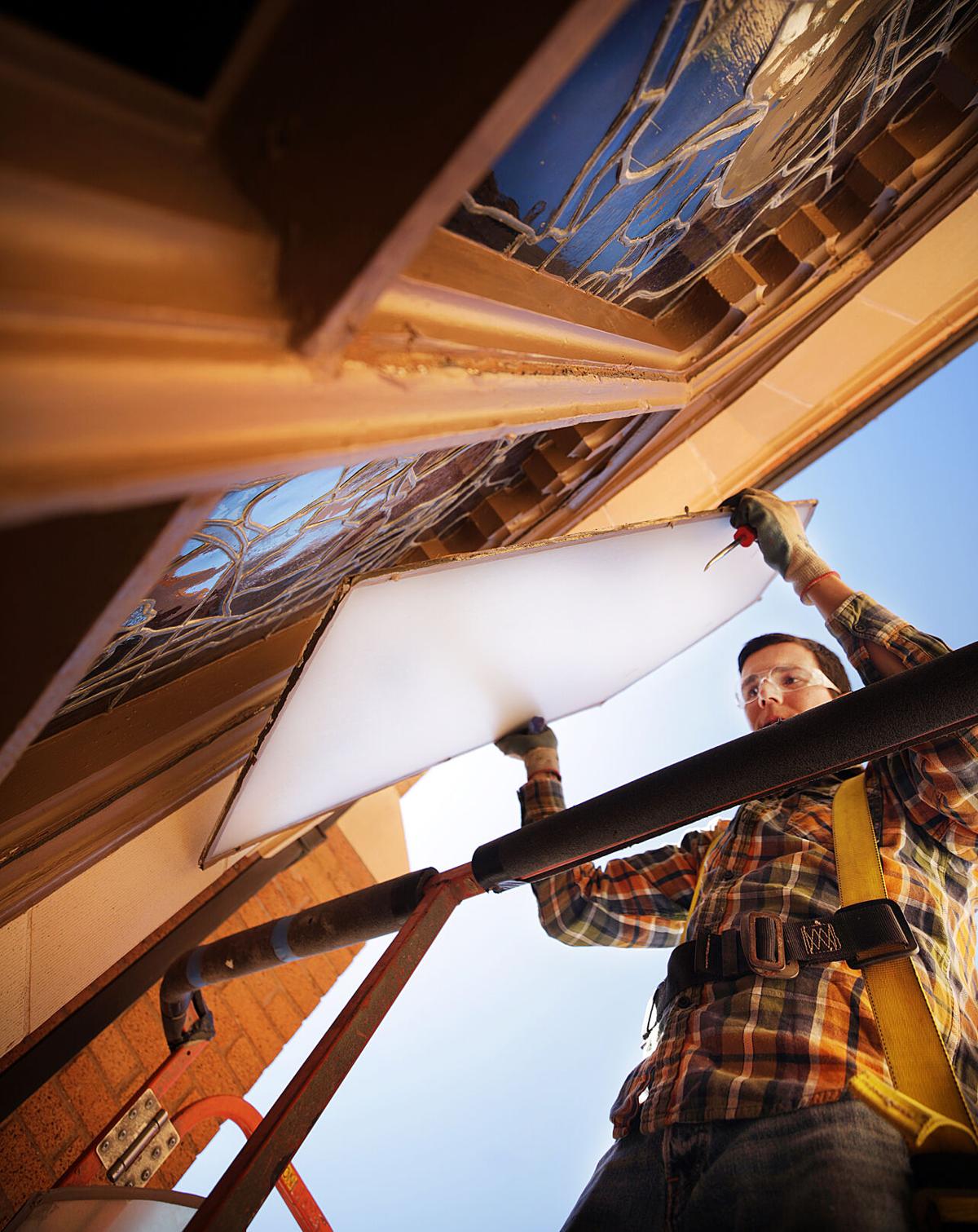 Gustavo Saavedra removes one of the old diffused panes from a stained glass window Thursday at St. Patrick in Bisbee. New tempered glass will be installed to replace the old panes. 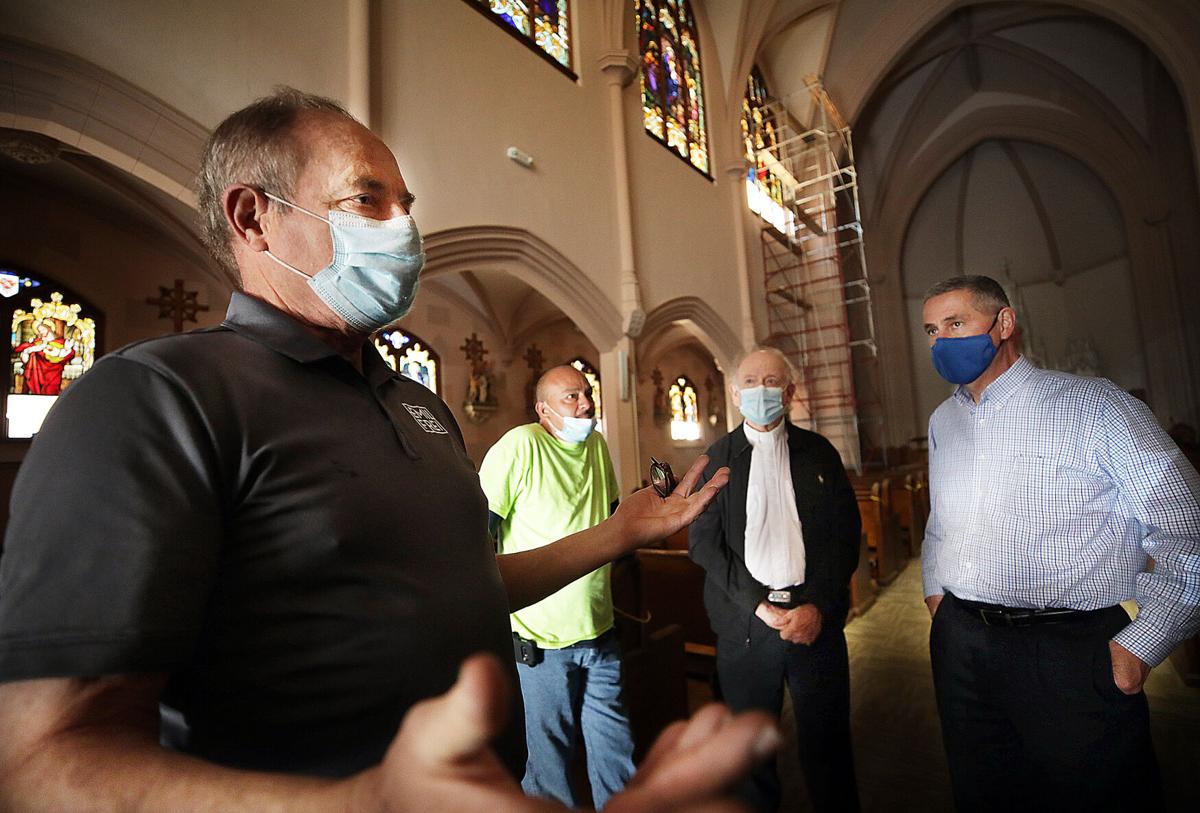 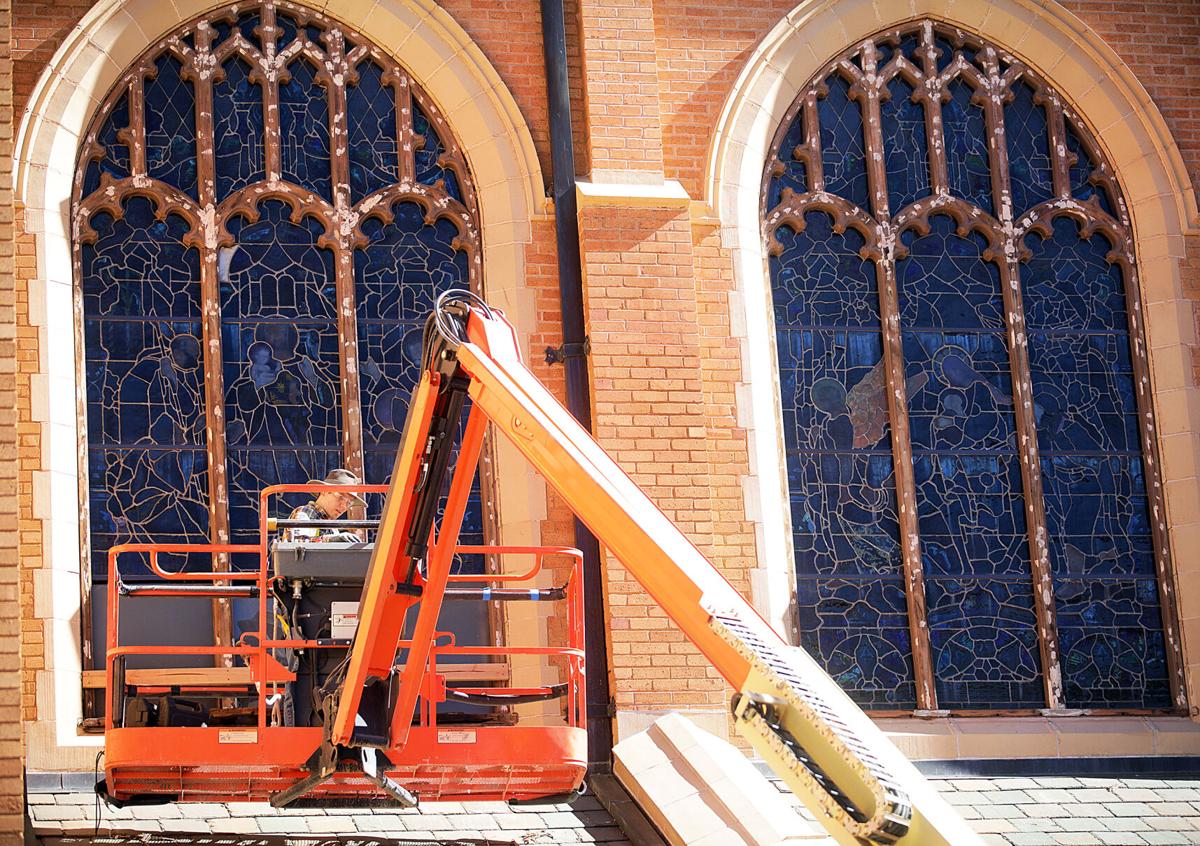 All of Bisbee’s St. Patrick Church’s windows are in the process of being cleaned and restored.

Emil Frei and Associates' Stephen Frei holds a small portion of stained glass to be duplicated as part of the restoration project at Bisbee's St. Patrick Church Thursday.

Gustavo Saavedra removes one of the old diffused panes from a stained glass window Thursday at St. Patrick in Bisbee. New tempered glass will be installed to replace the old panes.

All of Bisbee’s St. Patrick Church’s windows are in the process of being cleaned and restored.

BISBEE — The cleaning and restoration has begun on the glorious 106-year-old stained glass windows of St. Patrick Roman Catholic Church.

While two smaller windows at the church on Quality Hill were already worked on, a larger undertaking involving 11 windows started in mid-January and is expected to stretch into late March or early April, said Tony Underwood, the church’s pastoral administrator and deacon.

This is the first time that the windows — including two smaller ones — which depict the life of Christ from the moment of his birth to his crucifixion and ascension into heaven have been cleaned and restored. There are 30 windows in all, 2,377 square feet of stained glass.

The effort — titled The Window Restoration Project — will cost $500,000. The majority of that, $350,000, is for the cleaning and restoration of any cracks or shatters, and the remaining $150,000 is for structural work and painting of the windows.

According to a church newsletter detailing the project, “each section of glass will be thoroughly cleaned. Any broken or damaged sections will be sent back to the (Emil Frei & Associates) studio in St. Louis to be re-created. The stripping that holds the sections of glass together will be repaired. Old wood framing will be repaired or replaced as necessary.”

There are two shifts working on the windows daily, from 8 a.m to about 10 p.m., Underwood said. Part of the crew includes Jesse Morales, the fire chief of the Naco Volunteer Fire Department and the full-time chief of the Naco, Sonora, Fire Department. Morales and Francisco “Poncho” Encinas check the wood around the windows and contractor David Munsey will restore it, if needed. Once that’s done, Morales and Encinas will paint the wood so it matches the rest of the church’s exterior.

So far the church has collected about $410,000 through grants, pledges, fundraisers and mostly donations from the community and former St. Patrick students, said the Rev. Joe Saba, a retired Catholic priest and a Bisbee native who attended St. Patrick School as a child, as well as the church.

For Saba, seeing the windows at the church receive the much-needed attention is a godsend.

“As a child I can remember in grade school the sisters (who taught there) would point out at night all the different figures in the windows and what they meant,” he said. “We were probably more enamored with the glow of the windows.”

Underwood and Saba said the most impressive part of the painstaking endeavor — which church officials hope will be finished in the spring of 2022 — is that the work is being done by the descendants of Emil Frei, the Bavarian stained-glass artist who designed and installed the breathtaking windows in the church in 1915.

Thursday afternoon, Emil Frei’s great grandson, Stephen Frei, 67, walked around St. Patrick and spoke about the work in progress and his family’s involvement in the 15th century craft that Emil Frei embarked on when he started Emil Frei & Associates in this country in 1898.

The style of the windows at St. Patrick is known as Munich Pictorial Style. The latter was developed out of the Royal Bavarian Stained Glass Establishment in 1827 under Ludwig I of Bavaria.

“The style became very much loved because of its almost lifelike images of saints and apostles and Christ in metal and glass,” Stephen Frei said. “We don’t use anything organic, which is the reason that the priest who ordered these windows originally, if he were here today, would not be able to see any differences.”

That’s because none of the materials used on the windows are degradable, Frei said, ergo their resilience.

But they do need to be cleaned, and more importantly, Frei said, “make sure the structure is solid and secure from wind loads.”

The Frei family has designed and restored windows in about 7,000 churches. They are booked for the next four years.

In a telephone interview in 2019, Stephen Frei’s son, Aaron Frei, told the Herald/Review that the work would include replacing oil-based putty sealants on the windows with silicone. The sealants help keep water out, he said. Next, the windows would be examined to determine if there are any cracks. Then the diffusion glass — known as Lexan — that is covering the windows will be removed and replaced with quarter-inch tempered glass.

The final phase, according to Underwood, will begin in January and conclude in March or April, just like the current phase.

Recently, the public was invited to a drive-by event at the church to see the windows lit up at night after the diffusion glass was removed from some of the top windows, Saba said.

“It brought me to tears because it reminded me as a child what the windows really looked like,” he said.