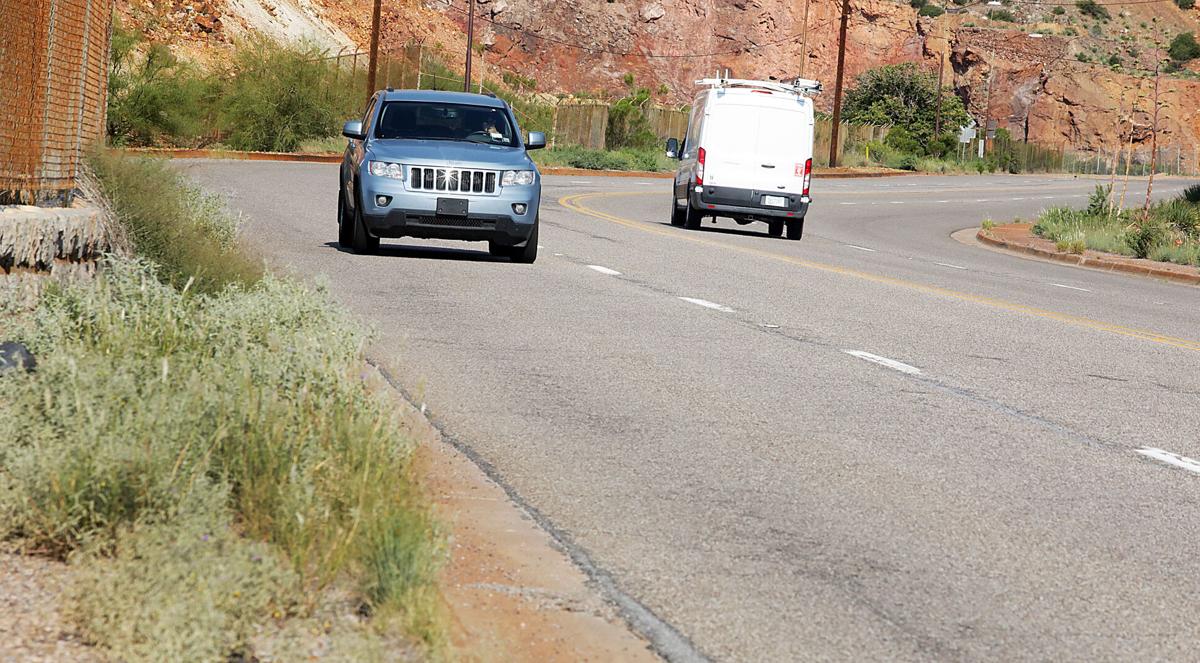 Bisbee is looking to construct multi use pathways along Highway 80 between Erie Street and Old Bisbee. 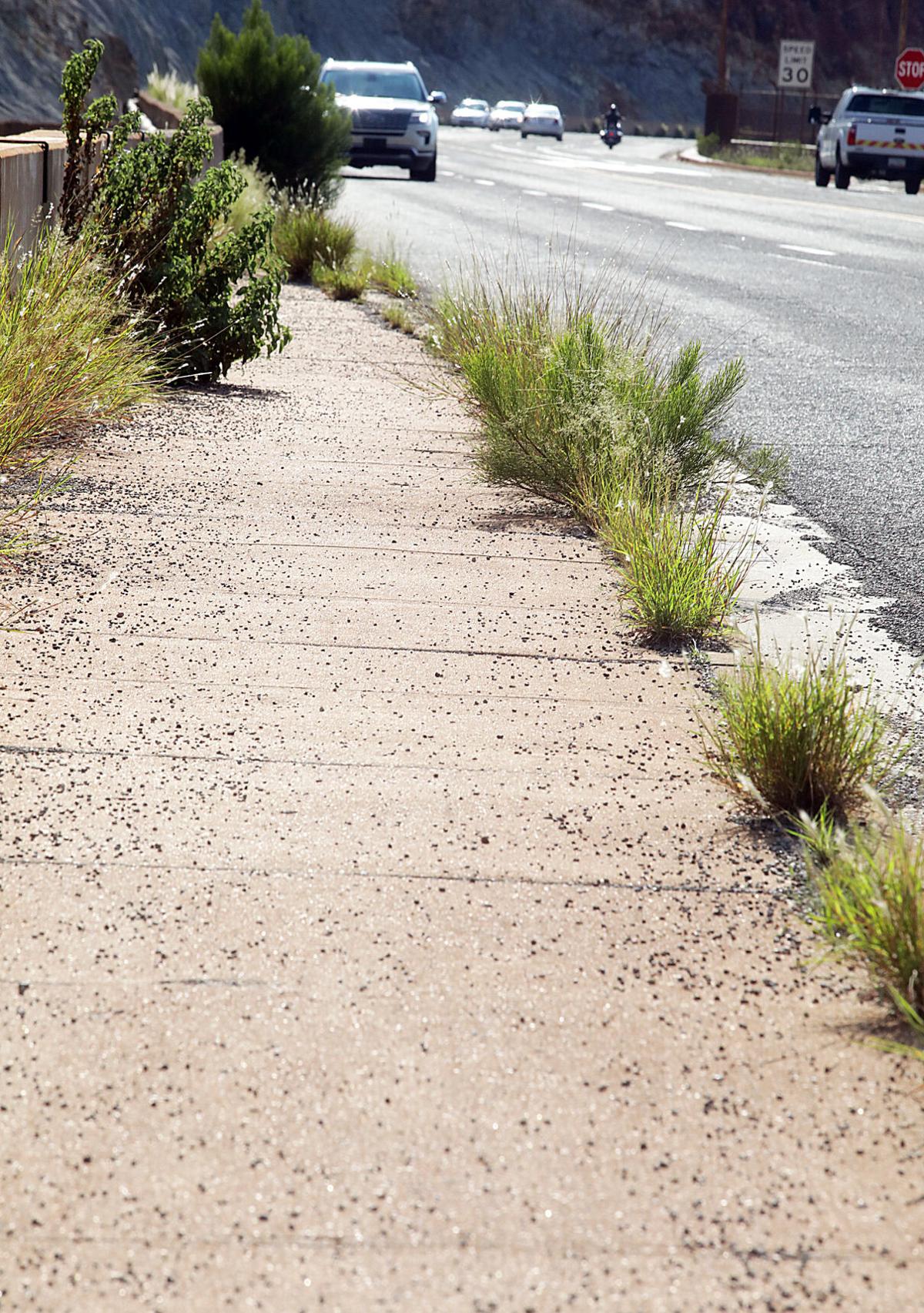 Highway 80 shows partial sidewalks on either side of the road near the Lavender Pit.

Bisbee is looking to construct multi use pathways along Highway 80 between Erie Street and Old Bisbee.

Highway 80 shows partial sidewalks on either side of the road near the Lavender Pit.

BISBEE — For many years, people have complained of the unsafe conditions of a walkway and roadway for pedestrians and cyclists along the Lavender Pit on state Route 80 running between Old Bisbee and Warren.

Now, thanks to a Bisbee resident, a solution may be forthcoming. Two years ago Meggen Connolley kickstarted the Bisbee Bikeways project to connect all the communities of Bisbee from the upper hills of the Mule Mountains to San Jose.

The Arizona Department of Transportation agreed to make room for a bikeway along state Route 92 and completed it last year.

At Tuesday’s meeting of the Mayor and City Council, a request for proposals was approved unanimously for a shared use pathway feasibility study to move the project forward, though with an added commitment to include Connolley and the proposed Sun Corridor Trail, a 1,400-mile walkable and bikeable scenic trail stretching from Las Vegas to Douglas.

Thanks to a U.S. Department of Agriculture grant, the feasibility study will be funded, City Manager Theresa Coleman said. In–kind work done by the city and other organizations will be accepted as the grant’s match.

In that the 1.25 mile project will run along the state highway through property owned by Freeport McMoRan Copper and Gold, Copper Queen Branch, possible changes to the highway will be accomplished by an consulting firm selected through the RFP process, she said.

The consulting firm will determine potential impacts on existing and new commercial and retail development, take into consideration tourism in the city, make recommendations on potential locations for the pathway, evaluate safety factors on possible lane closures with traffic counts, identify lighting and possible routes to move power lines underground and identify right of ways for acquisition, according to the RFP. Public support must be included and estimated cost must be determined.

Since Connolley spearheaded the project, Councilwoman Joni Giacomino wanted Bisbee Bikeways to be included in the project going forward.

Councilman Louis Pawlik agreed and said the Sun Corridor Trail organization should be included as collaborators as well.

Connolley stated in an email, “I’m excited that the updated RPF for a shared–use path around the Lavender Pit is going out for bid, and I look forward to the results of the feasibility study. This study will provide the groundwork for better walking and biking infrastructure around the Pit. I thank the Council for recognizing my unwavering commitment to this project by including Bisbee Bikeways as a coordinator in the study, which was detailed in the USDA grant. In addition, coordination with the Sun Corridor Trail will bring a regional and statewide perspective to the study. I look forward to hearing the needs and desires of the residents of Bisbee regarding a shared–use path around the Lavender Pit. For more information on the Bisbee Bikeways project visit http://www.bisbeebikeways.com.”

Paving to begin Sept. 8The much needed paving project from the Route 80 southern exit into Old Bisbee to the Route 80 northern exit to Tombstone Canyon will begin Sept. 8, according to Jesus Haro, Bisbee public works director. The work will include more extensive road repair from Naco Street off Route 80 to Brewery Gulch, which he thinks can be done by city staff.

He received approval on the $570,485 contract with KE&G Construction, which included thermoplastic traffic control overlays. Haro received three different proposals from KE&G with different options. Though the council approved the contract at the last meeting, it was not the one that included the thermoplastic overlays. He needed to correct his error.

Committee dissolvedSmith said the group had fulfilled its mission to create a guide. He also said the committee had convened only four times over the past three years due to lack of a quorum. The chairman of the committee told him “it was time to move on.”

The plan is on the city’s website and may be incorporated into some of the decisions made by other city commissions, boards, committees and the council.

Hansen and Smith offered their thanks in completing the task.

Ambulance fees approvedThe mayor and council approved the voluntary ambulance fee subscription that will be offered to residents and businesses to help cover out-of-pocket costs for emergency transport to the hospital.

Currently, there is about $486,000 in outstanding ambulance fee debt, some of which will never be recovered, said Coleman. People can be on the hook to pay the out-of-pocket costs and often can only manage $10 a month. She hopes the $45 subscription fee is affordable enough so those folks do not have to worry about making monthly payments.

With ambulance fees rising to $1,416 plus mileage, the subscription helps those on a low income, said Coleman.

The subscription does not cover inter-facility transfers.

Cline asked, “Will we lose more money in the long run?”

Coleman said the fees could be readjusted as the program progresses. The fee she recommended is the same as other cities of Bisbee’s size.

Giacomino and Cline voted in opposition to the subscription fees.

Approved the resignation of Albert Hopper from the Appeals Board for the Property Maintenance Code.

Approved the dissolution of the Community Sustainability Committee.

Adopted the final results of the Primary Election.