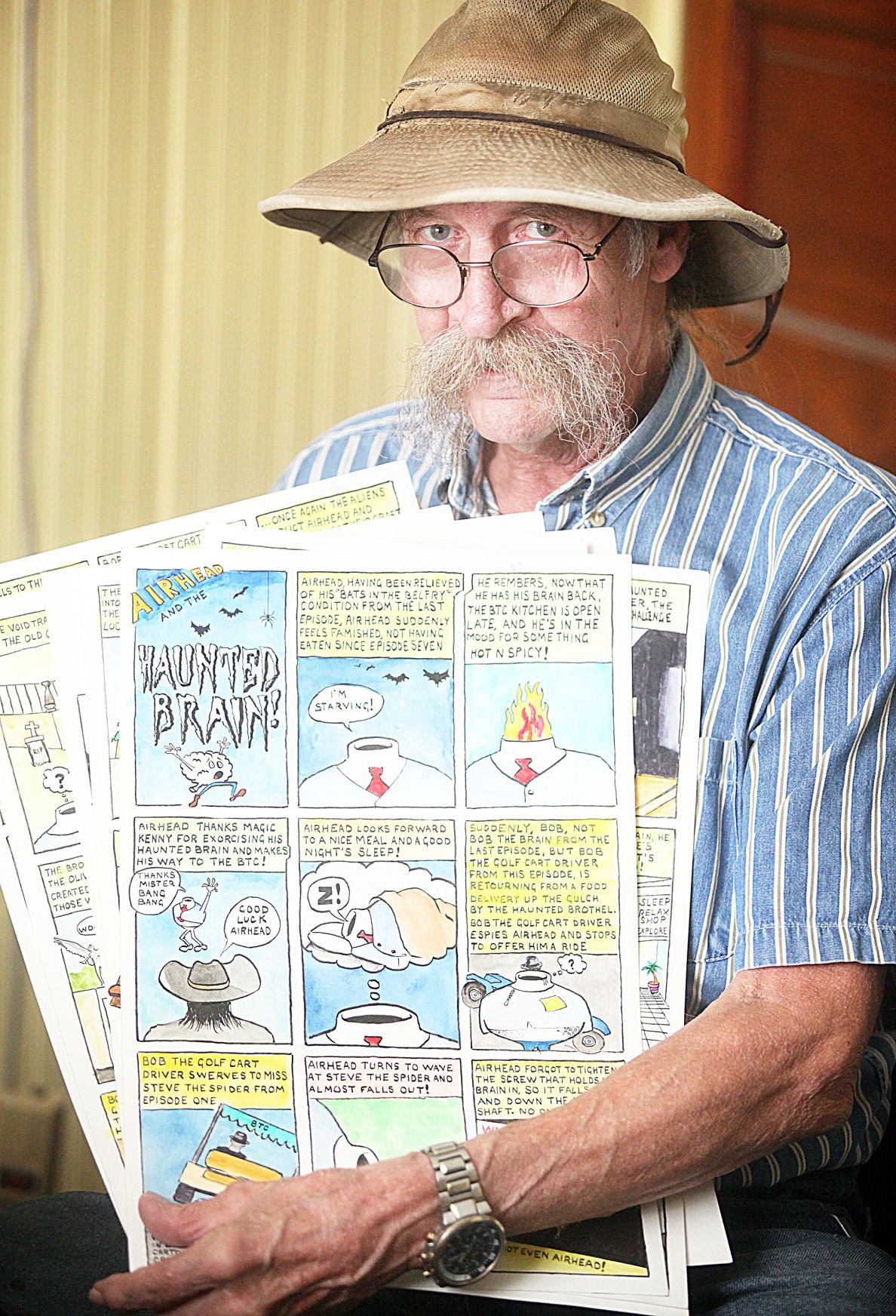 Bisbee artist Lance Von Prum displays some of the comics he has created recently. 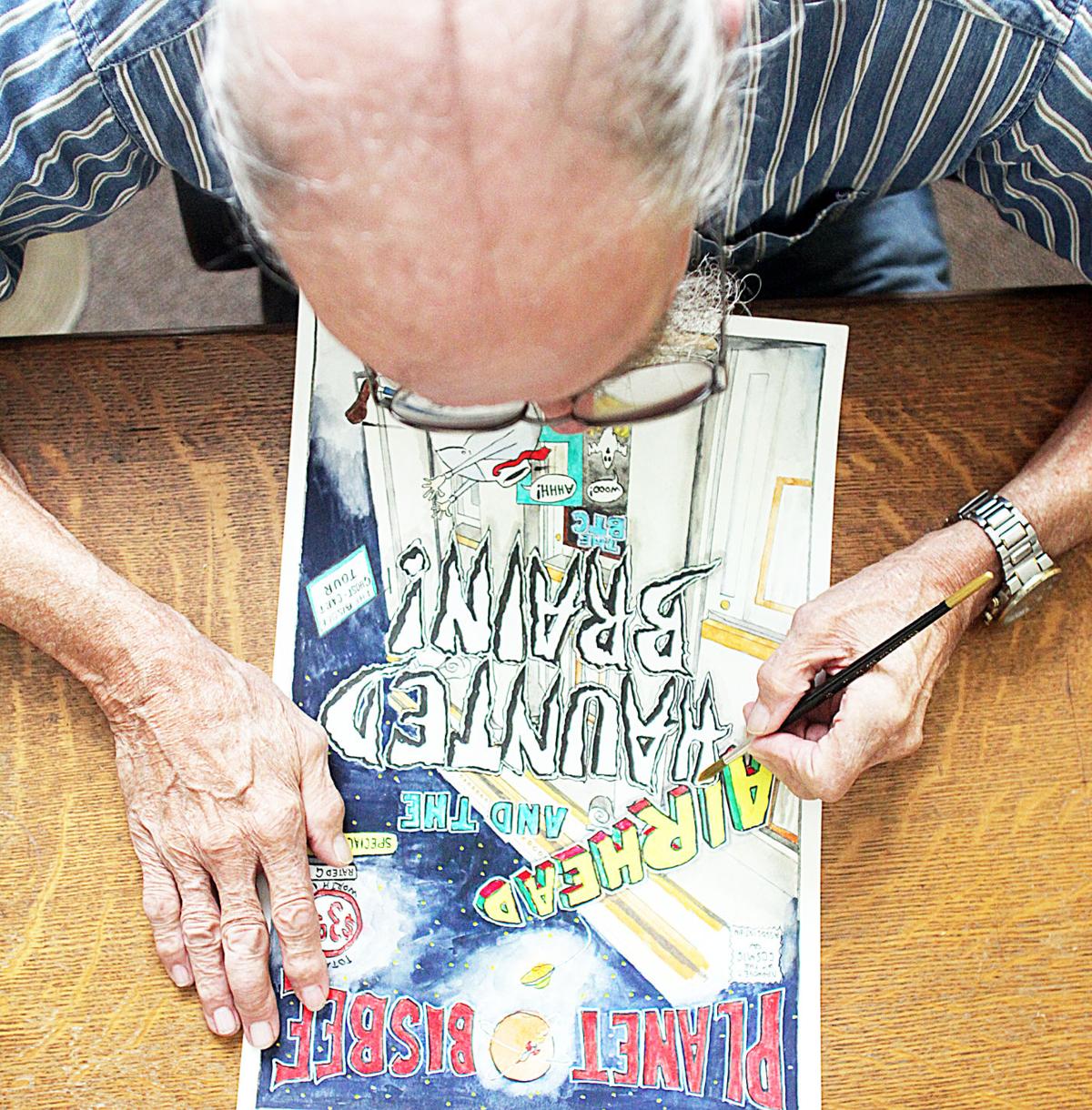 Lance Von Prum overlooks a comic he is working on. 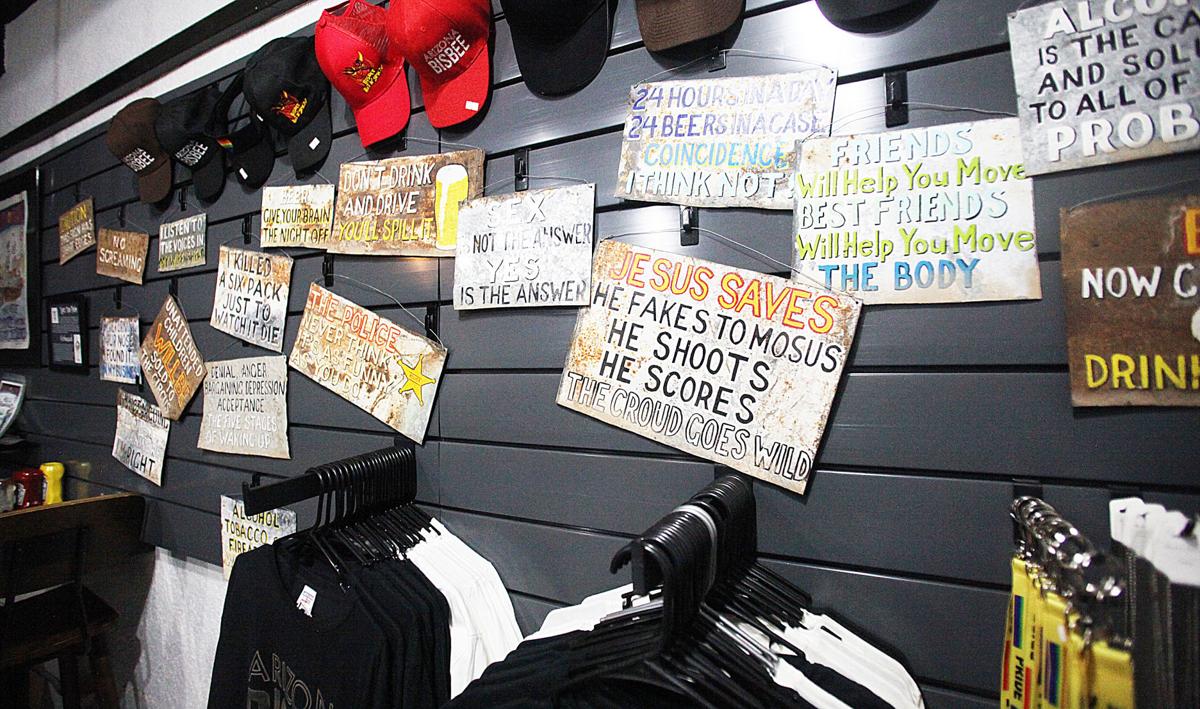 Planet Bisbee comic artist Lance Von Prum’s signs and other artwork is on display at the Bisbee Tour Company.

Bisbee artist Lance Von Prum displays some of the comics he has created recently.

Lance Von Prum overlooks a comic he is working on.

Planet Bisbee comic artist Lance Von Prum’s signs and other artwork is on display at the Bisbee Tour Company.

A non-assuming newcomer has thrown himself into Bisbee life through his artistic talents, which include writing, painting and the comic book “Planet Bisbee.”

Lance Von Prum, 71, started his art career at age five and even though he found himself in unpredictable situations through military service in Vietnam as a helicopter pilot, he has not stepped away from the creativity and sense of adventure he found growing up.

“I seem to have had more than my share of adventures, especially in my younger years,” he explained.

At age seven, he says he saw a UFO. When he was just 17, he got his pilot’s license. Somehow, he survived a 100-foot fall off a cliff in his Mini Cooper with just a few scratches.

In the U.S. Army, he was stationed in Iran before the Shah of Iran fell.

“I was sent from there to a base in Thailand that didn’t (officially) exist and I was ‘never there,’ but if I was there — I flew photo recon and radar mapping missions of the Ho Chi Minh Trail in Laos and Cambodia,” he said. “I crashed twice and we all survived.”

While serving, he also joined a sky diving club and has 60-some jumps under his belt. On one jump, his chute pull cord had not been secured and he had trouble reaching up for it, but finally got a hold of it and pulled. Again, he survived.

“I had an emergency chute, but I didn’t even think about pulling it,” he laughed.

He was also stationed at Fort Huachuca for a while in training and came to know Tombstone and Bisbee on the weekends.

One of his biggest claims to fame was building a car for the “Blade Runner” movie.

All that was before the age of 25.

He owned a car shop and built custom cars, limousines, a unicycle, a recumbent bike, which allows the rider to recline, then, possibly the first recumbent electric tricycle.

“I can design and build almost anything, given the tools, materials, and equipment,” he added.

He has also written books: “I Died, But I Got Better: By The Man Who Fell To Earth, or, How A Dozen Brushes With Death Transformed My Life,” “Tales of Heater, Texas: The Continuing Tales of the Tiny Town of Heater, In The Republic of Texas,” “Change Your Mind and Change Your Life: A simple guide to improve the quality of your life,” “Your Personal Guidebook To Quality Living: Understand Your World and Take Control of Your Life/A Notebook With All The Answers” and a series on building, selling and buying custom cars. All are available on Amazon.

He was born in Devil’s Lake, North Dakota. His family moved to Portland, Oregon then to Vancouver, Washington His travels brought him to Fredericksburg, Texas, but things there got too hectic as a tourist town, costs rising along with the number of day trippers.

In looking for places to live, he made a list. He remembered Bisbee from his Army days and decided that was where he was going to make his new home. He moved to the Queen Mine RV Park, where he spends time drafting his ideas on paper for the next comic and continuing his watercolor paintings.

In his year and a half in Bisbee, he has continued his career as a watercolor artist and has developed a comic character he first created as a student at the Art Center College of Design in Pasadena, into a comic book series called “Planet Bisbee.”

Air Head, the main character, ends up in the strangest of circumstances as he experiences life in Bisbee and beyond. Von Prum adds in local flavor in each comic by including Bisbee’s local establishments and people.

“I want to promote Bisbee every way I can,” he noted. “I want to do my part to bring people to town.”

He hopes as people buy his comics, they will be shared with friends so they will become interested in his new hometown.

The advertisements in his comic books are the result of door-to-door requests as he tries to cover costs for making them.

He said it takes three weeks to do an eight-page comic book. He prints 200 to 300 comics at the local Copper Queen Publishing Co. and each is placed in a plastic bag to protect them. They are sold at various locations around Old Bisbee.

He has seen people pick them up, but they don’t take them out of the plastic bags, so he plans to have a copy potential buyers can thumb through before buying.

Reed Booth, The Killer Bee Guy, commissioned him to do a comic on his bee business and Von Prum came up with a bee attack from outer space. Other businesses in Bisbee have also hired him to produce fun comics tailored to their niche.

“The ideas just come out of my head,” he continued. “When I start, I never know how it’s going to end.”

And, it seems he has plenty of ideas bouncing around in there for future plots.

“I love it here,” he emphasized. “Everyone is so friendly. I’ve made a lot of friends here.”

One day, a man approached him at a gas station, arms waving, calling a name. He then realized he was mistaken and did not know Von Prum.

“He introduced himself to me,” he beamed. “Where else do people do that? It surprises you how nice the people here are.”