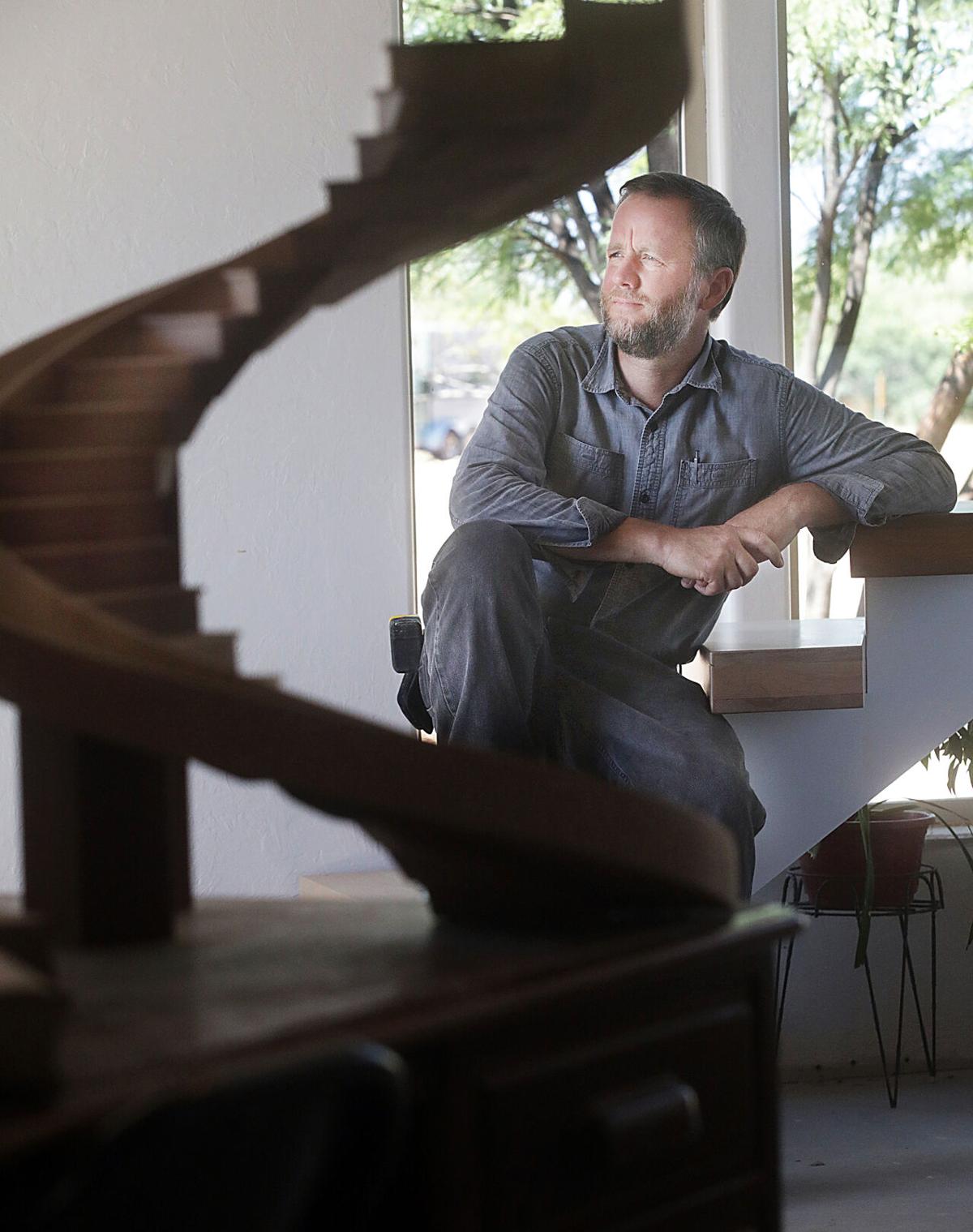 TopTread Stairways owner/operator Clyde Martin sits near a mach stairway for a client in his Sierra Vista showroom. 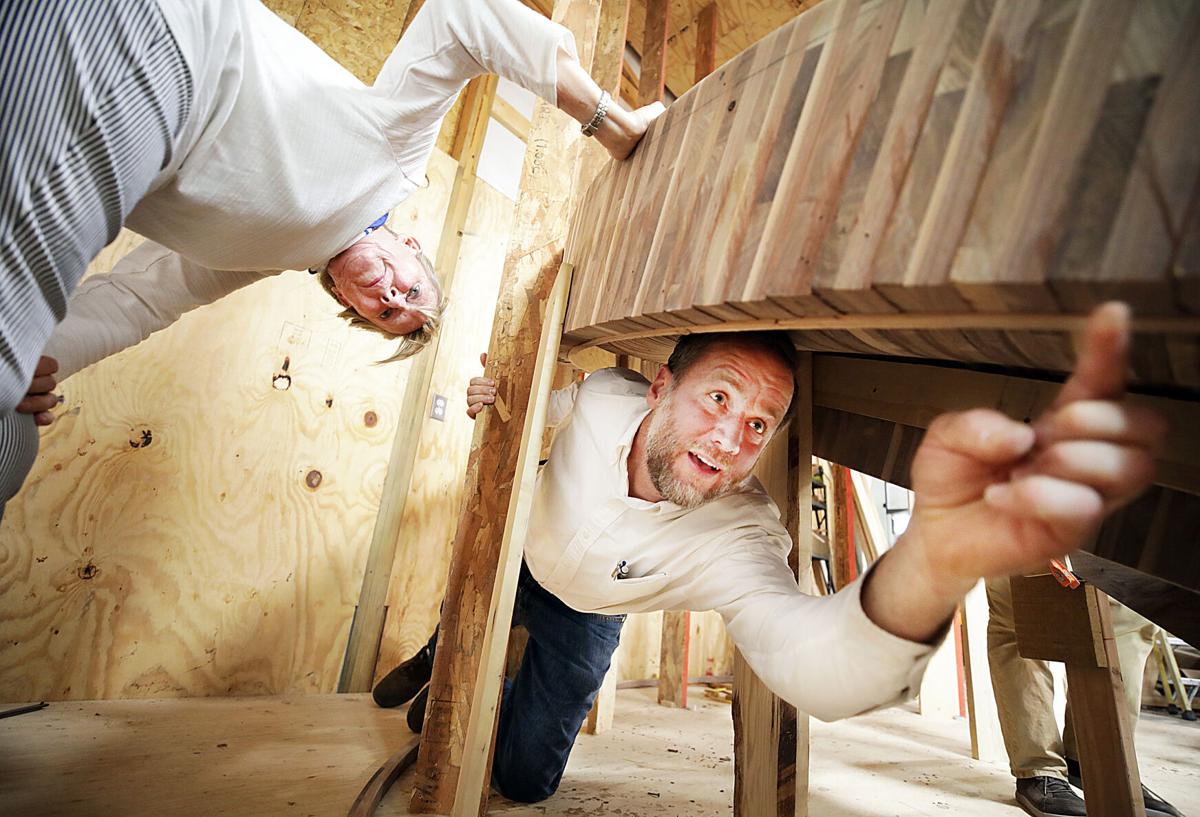 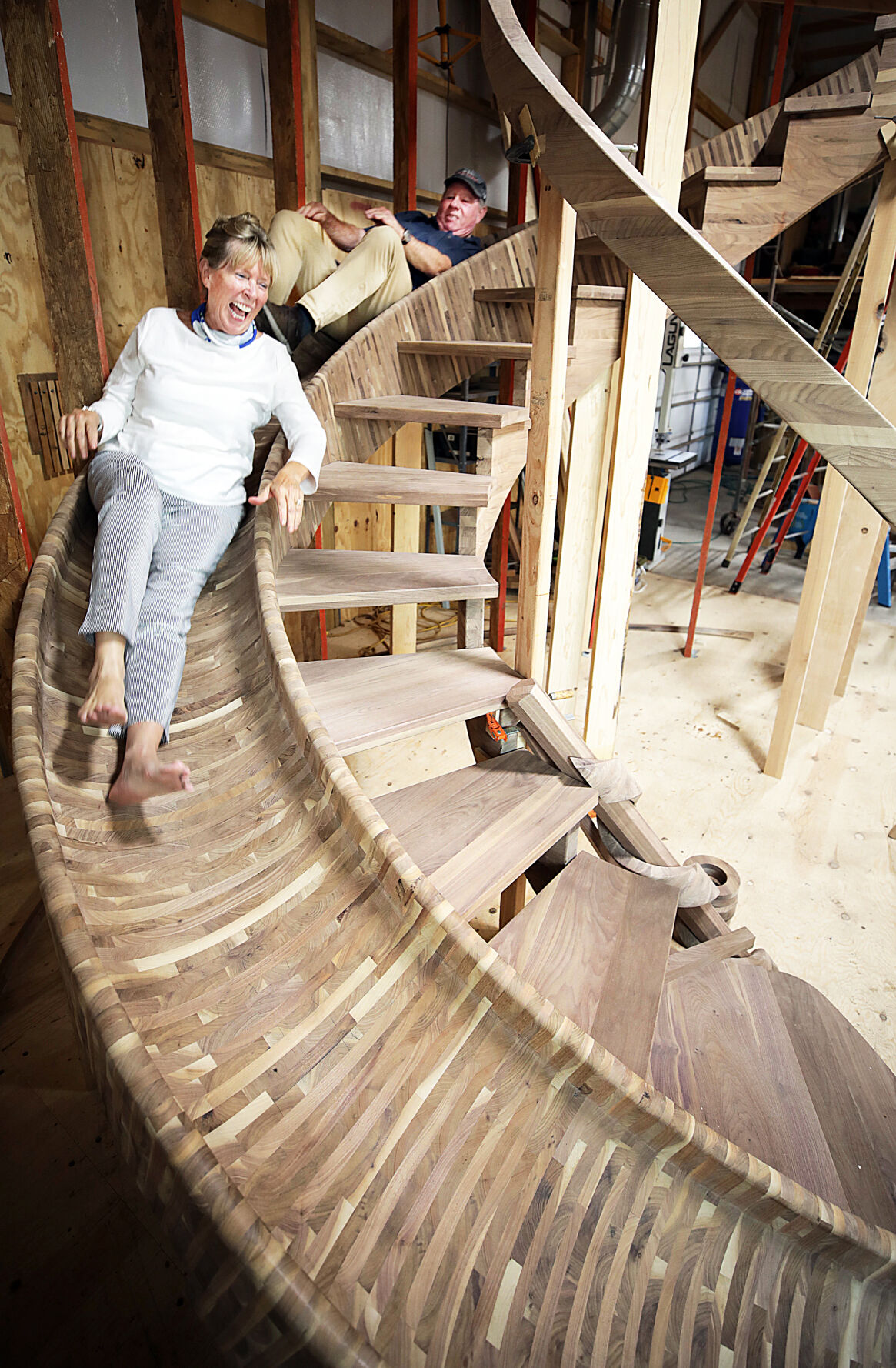 Marilyn and Mark O’Brien test drive the unique staircase/slide they had constructed while visiting Clyde Martin’s Hereford workshop. The Sacramento couple seem to like the results. 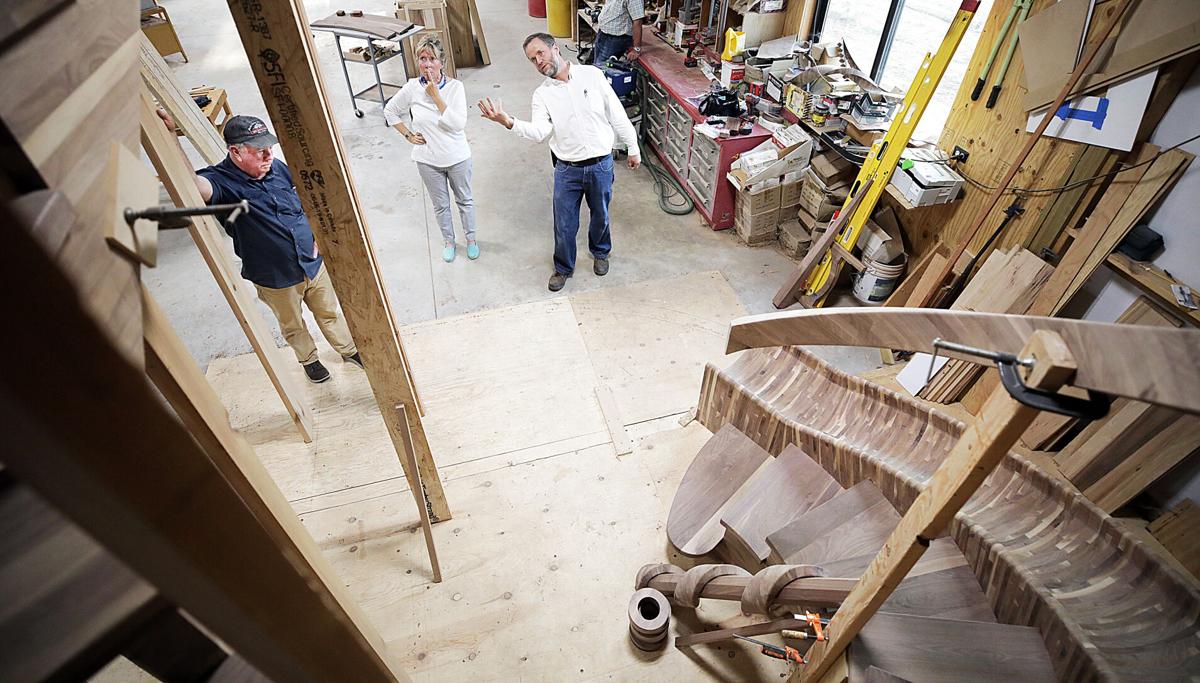 Customer Marilyn O’Brien listens as stair master builder Clyde Martin points out some possibilities to the stairway/slide he built. 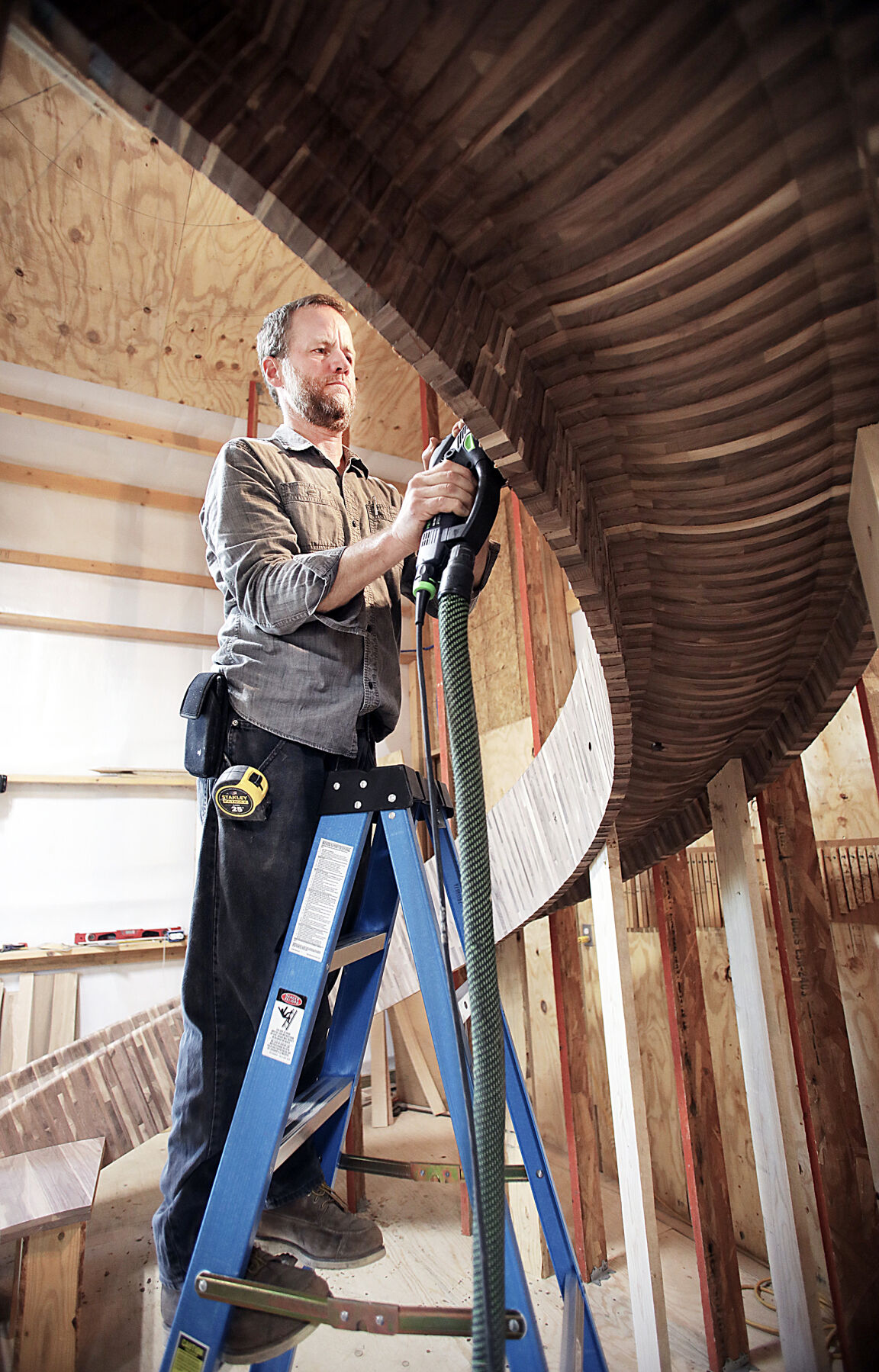 Clyde Martin finishes a slide which will also include a staircase for a California customer’s home. 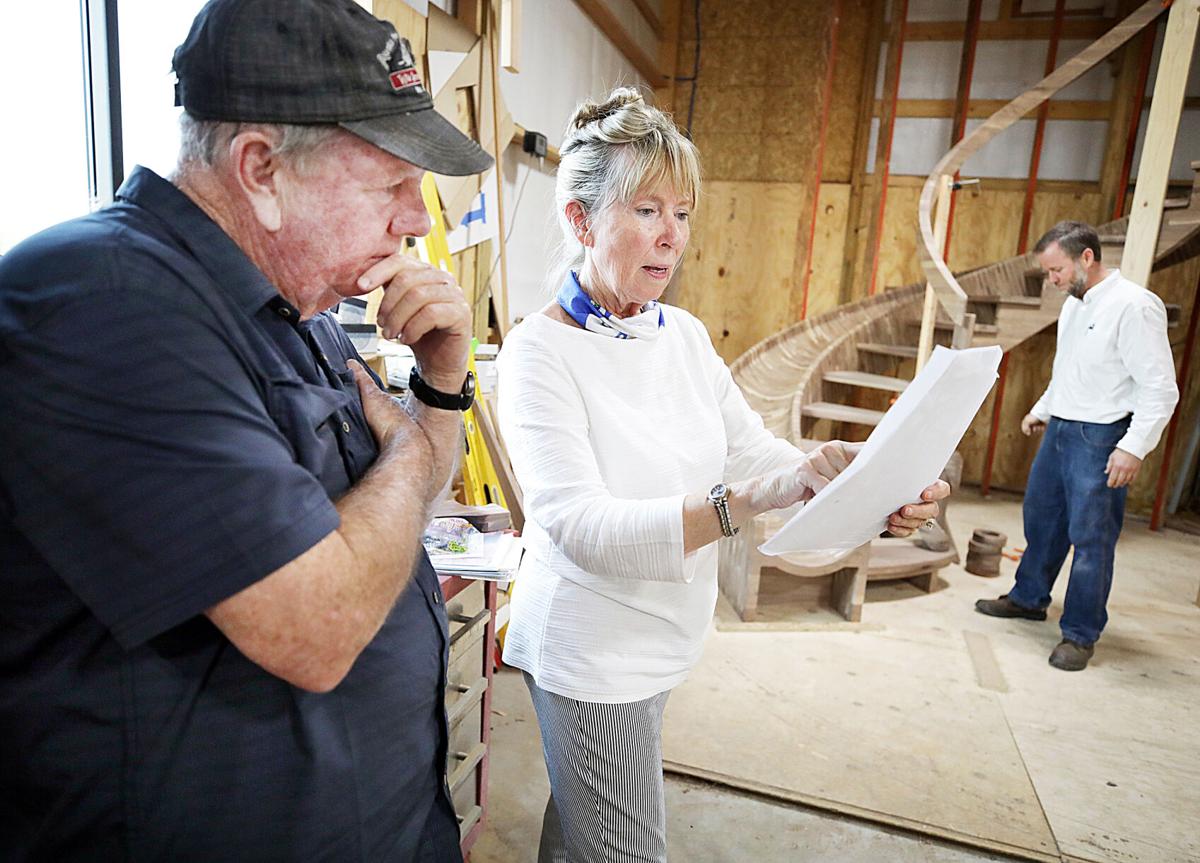 Mark and Marilyn O’Brien peruse the plans of their special staircase while in Clyde Martin’s workshop last week.

TopTread Stairways owner/operator Clyde Martin sits near a mach stairway for a client in his Sierra Vista showroom.

Marilyn and Mark O’Brien test drive the unique staircase/slide they had constructed while visiting Clyde Martin’s Hereford workshop. The Sacramento couple seem to like the results.

Customer Marilyn O’Brien listens as stair master builder Clyde Martin points out some possibilities to the stairway/slide he built.

Clyde Martin finishes a slide which will also include a staircase for a California customer’s home.

Mark and Marilyn O’Brien peruse the plans of their special staircase while in Clyde Martin’s workshop last week.

SIERRA VISTA — Not many people would’ve thought to install a slide inside of their home, let alone one that’s over 30 feet tall. When Marilyn and Mark O’Brien wanted to make their dream of having a 33-foot curved slide and an adjacent spiral staircase inside their home in Sacramento, California, they hired local Sierra Vista stair constructor Clyde Martin, owner of Top Tread Stairways, to make their dream come true.

Martin, 46, has had a life-long passion for woodwork that was instilled by his father, a custom home builder in Pennsylvania. Martin apprenticed alongside of his father and eventually became the supervisor of their family business. In 2006, Martin started his own stair construction business, Top Tread Stairways, in California and recently relocated to the Sierra Vista area.

Up until about two and a half years ago, Martin’s commission for stairways was between $500-$2000 range. But since then, Martin got commissioned to his first six-figure project, the O’Brien’s thirty-three foot slide with a parallel staircase.

Martin said that the O’Briens came into contact with him in November 2017 based on the recommendation of the O’Brien’s architect.

“He was the first person who could envision what we wanted,” said Marilyn O’Brien after conversing with Martin on the slide’s specifications. Marilyn O’Brien also told Martin that they were trying to have this slide and stair set built inside of their tower room inside their home for eight years.

Finally, after two and a half years of planning and designing, the O’Brien’s dream slide is now a reality. After Martin researched designs for slides with similar specifications to the O’Brien’s, he found that his design for O’Brien’s slide was unique.

“There isn’t another slide like this in the world with stacked lamination,” Martin said after researching slide plans for similar projects. After deciding on a final design, Martin built a full-scale medium-density fiberboard (MDF) wood slide, a 7-foot-long prototype, for the O’Briens and their grandchildren to test out before production on the final product began.

After the green light was given by the O’Briens, the construction of the final slide and staircase began in February of this year.

The O’Brien’s slide is constructed out of all American black walnut wood. A total of 438 layers of 2-foot-wide by 8-foot-long cross-laminated planks were glued and milled into shape for the final product.

Martin said he emphasized increased durability by using the stacked lamination technique for constructing the curved slide, whereas the alternative method of bending and securing the wood pieces into shape stresses the material’s load more.

With the stacked lamination technique, the layers of wood planks are glued and subsequently milled into their final shape. Martin said that this construction technique would lower load and stress on the material and enable both youth and adults to ride the slide with ease.

After construction was completed in August, the final bottom section of the slide weighs 800 pounds, with the side section weighing 1,700 pounds without the adjacent curved staircase.

Since the O’Briens aren’t local to the Sierra Vista area, the ability to transport the slide and staircase was a critical element of the design. To address this issue, Martin built the slide in three sections with the additional stairway breaking down into thirty pieces for transport.

These three sections, plus the disassembled pieces of the stairway, will be loaded into Martin’s 18-foot enclosed trailer and transported to the client’s home in California during the next week.

On Thursday, the O’Briens flew out to Sierra Vista to view and test out the finished slide in Martin’s workshop before it’s transported to their home.

“I just giggled with excitement. It was more than I ever expected or dreamed of,” said Marilyn O’Brien upon viewing the slide for the first time. The couple tested out the slide while inside of Martin’s workshop that Thursday evening, with imminent glee and joy radiating off their faces as they both subsequently traveled down the slide.

The O’Briens were thrilled with the final product and gave Martin high regards. “He kept a smile on his face the entire time,” said Mark O’Brien, “He listened to Marilyn throughout the entire process. . .He was great.”

The O’Briens initially commissioned the slide as an addition to their home to “Take it to a whole another level,” and to add an element of fun for their grandchildren and themselves.

The couple said that they “Would recommend him (Martin) to anyone.” With the completed slide and staircase scheduled to be transported and installed between September 23-29, the good times and fun rides are just around the corner.