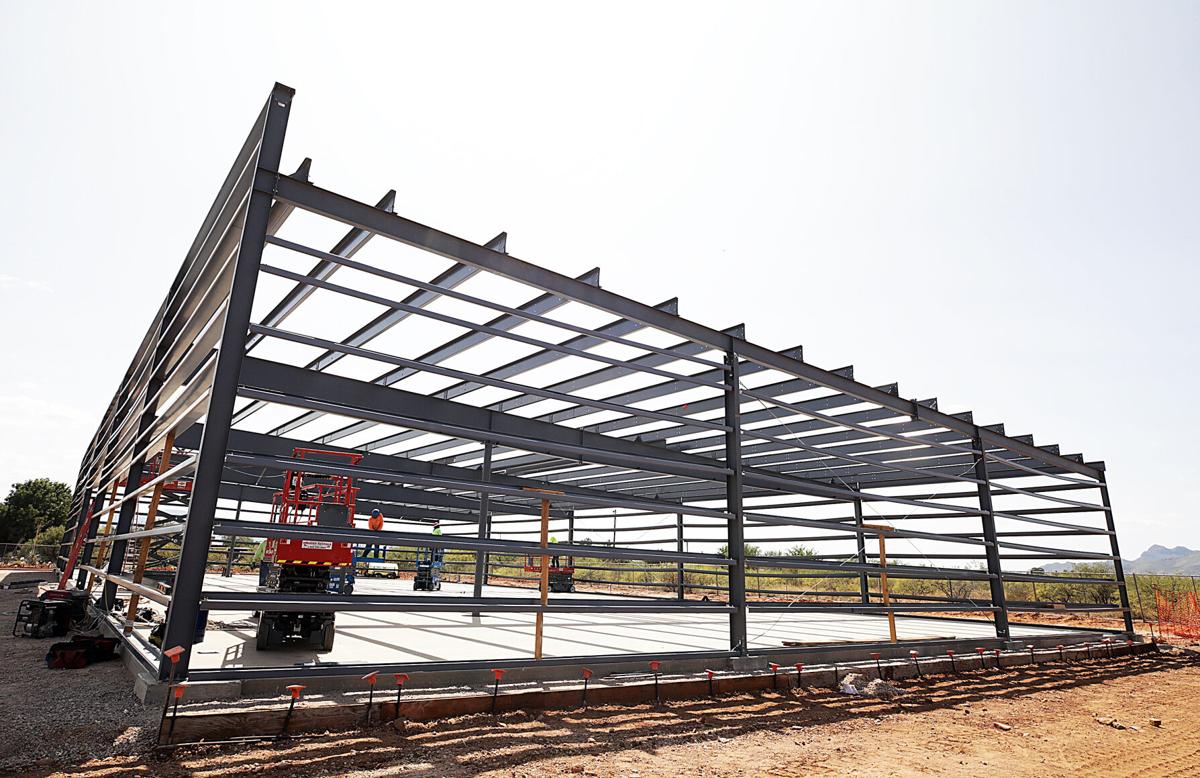 A new Dollar General building is being erected along Highway 90 in Whetstone. 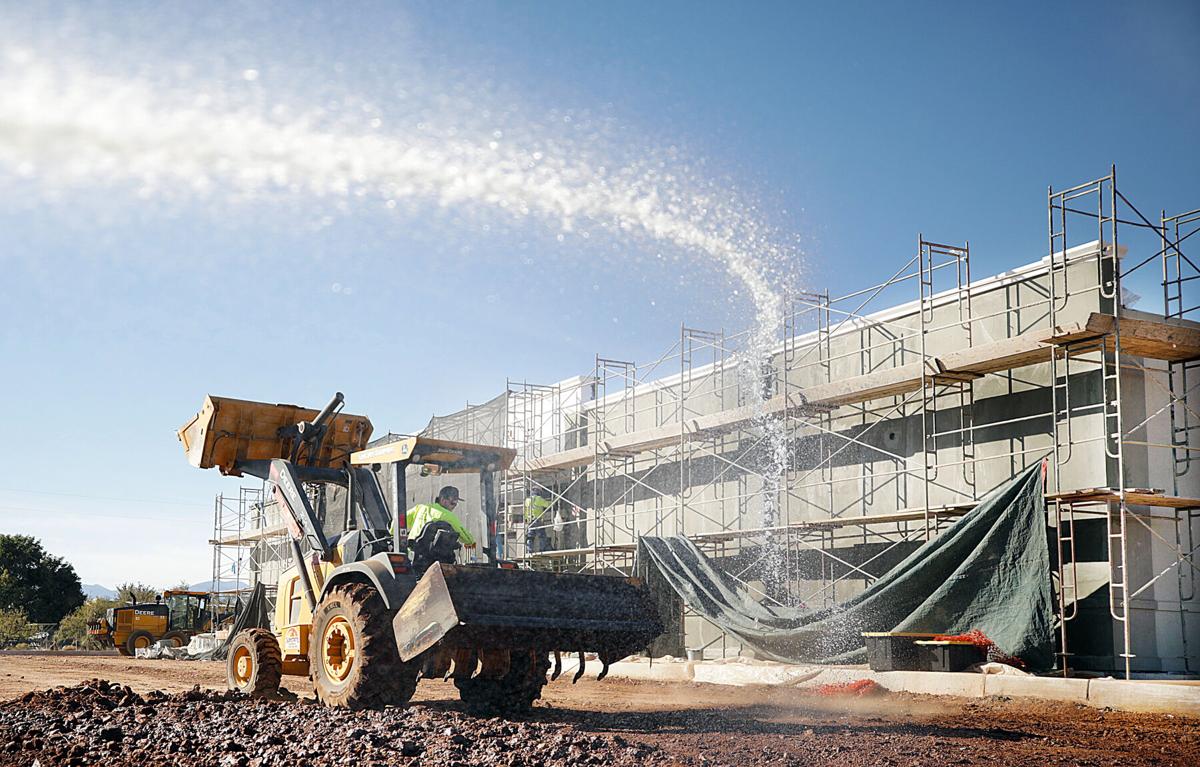 Workers put the finishes on the next stage of the new Dollar General store in Whetstone.

Workers place beams on the foundation of the new Dollar General store in mid-September. Located at Highway 90 and Sunset Road in Whetstone, the store is expected to open sometime in December. 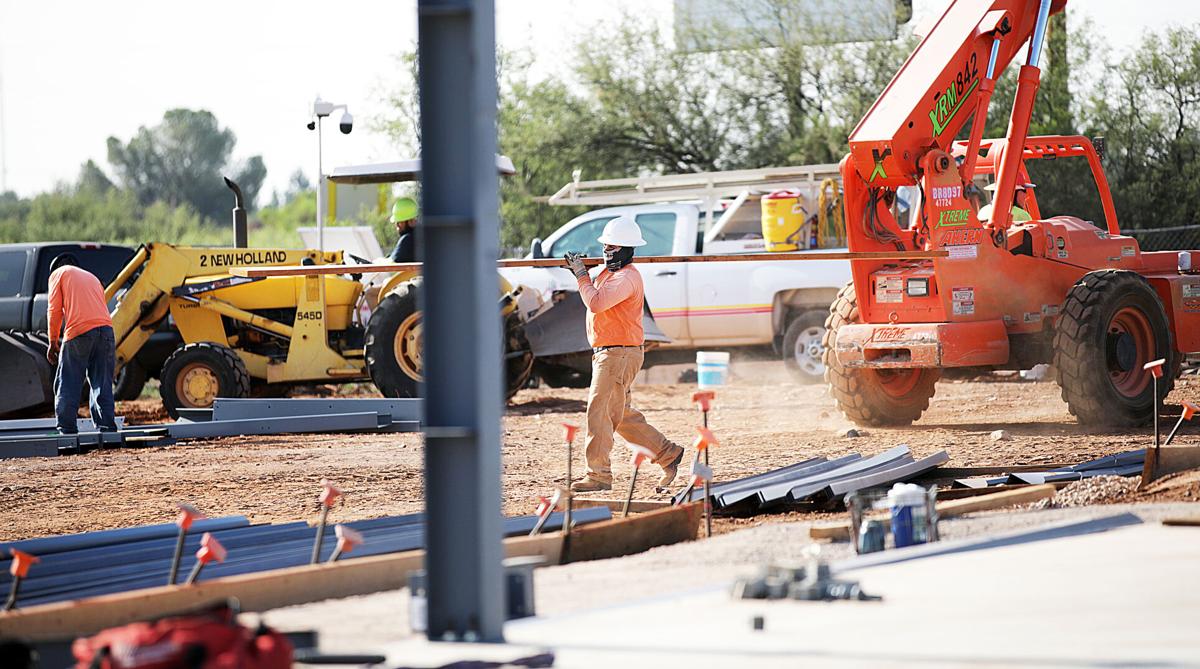 Lechner Construction employees work on the beginning stages of a new Whetstone Dollar General store in mid-September. The store is expected to open in December.

A new Dollar General building is being erected along Highway 90 in Whetstone.

Workers put the finishes on the next stage of the new Dollar General store in Whetstone.

Workers place beams on the foundation of the new Dollar General store in mid-September. Located at Highway 90 and Sunset Road in Whetstone, the store is expected to open sometime in December.

Lechner Construction employees work on the beginning stages of a new Whetstone Dollar General store in mid-September. The store is expected to open in December.

WHETSTONE — A new Dollar General store currently under construction at 2295 N. Highway 90 is slated to open sometime in December.

Lechner Construction, Inc. out of Tucson is building the 9,100 square-foot store on a 1.7-acre parcel located at the corner of Sunset Road and Highway 90 in Whetstone.

Little Family Farm owner Donna Graybill is one of the supporters.

“I like the idea of the convenience of a store close by,” she said. “I think it’s going to be a great addition to the area.”

According to Dollar General Corporation Public Relations representative Angela Petkovic, the store will provide approximately 7,200-square-feet of sales floor and hire between six and 10 employees.

“Our customers are at the center of all that we do, and meeting customers’ needs is Dollar General’s top priority when choosing store locations,” Petkovic stated through an email. “In selecting store sites, we take a number of factors into consideration, carefully evaluating each potential new store location to ensure we can continue to meet our customers’ price, value and selection needs. We further strive to provide convenience for customers who may not have affordable nearby retail options.”

David Espinosa, a Lechner construction supervisor who has been overseeing the work, said construction started July 8 and has been going smoothly since.

“Cochise County has been working really well with us and we expect to be handing the store over to Dollar General the first week in December,” he said. “From start to finish, we expect construction to be completed in four months, so we’re pleased with the way the project has come along.”

While Lechner Construction is based out of Tucson, local vendors were used for some of the work, Espinosa said.

Overall, residents that have been following the store’s progress seem pleased about having a convenience store in the neighborhood, Espinosa said.

“We’ve heard from a few residents who are unhappy about a Dollar General in the neighborhood, but the majority of people we’ve spoken to are happy about it.”

Some residents objected to the removal of established mesquite trees on the property and wanted a few trees left in place for screening purposes, while others expressed concerns about the potential traffic impact on Sunset Road.

“We knew there were people that wanted to keep some of the mesquite trees, but Cochise County told us they had to be removed because of drainage issues,” she explained. “We will be going back and planting a minimal number of native plants on the front part of the property, but we were not able to keep the trees.”

The rest of the property will be covered with filter fabric and rock to give it a finished look, much like the Dollar General store in Mescal, Goldman added.

Access in and out of the store property will be from the frontage road along Highway 90, not from Sunset Road as some residents had feared.

“The delivery trucks will be able to pull into the property from the frontage road and will back up to docks to unload merchandise,” Goldman said. “Once construction is completed, there will be no way to access the property from Sunset Road.”

Lechner Construction expects Dollar General to take possession of the store on Dec. 7 and possibly open for business about a week later.

“There will be a high volume of trucks coming and going during the first week that Dollar General has possession of the store while interior supplies and merchandise are being delivered,” Goldman said. “After the store is open for business, the delivery traffic is going to drop off to about two trucks a week.”

Whetstone resident Diane Quast lives on Sunset Road, about three-fourths of a mile west of the store.

“I have mixed emotions about this,” she said when asked about the new arrival. “I like living in the country. I like the fact that we have minimal traffic on Sunset Road, and the fact we have wildlife and no street lights. I like the quiet existence we enjoy by living in a rural area. I’m concerned this new store is going to impact the things we like about living here.”

However, Quast also admitted that the prospect of purchasing bread, milk, eggs and other staples without having to drive into Huachuca City or Sierra Vista will be a convenience for people in the area.

“My guess is that other people in our neighborhood feel the same way,” she said. “I wish they had left some of the trees on the property. It’s disappointing that they removed them.”

Another Sunset Road resident, Chuck Everett, is concerned about potential safety issues with north- and south-bound traffic on Highway 90 as vehicles merge onto Sunset and the frontage road.

“This three-street malaligned intersection is a recipe for disaster. It’s already one of the most dangerous intersections around,” said Everett, a 32-year resident. “I am not against the Dollar General, but it’s the safety issues that concern me.”

Dollar General has already reached out to Lechner Construction about building another store in Cochise County, Goldman said.

“We’ve enjoyed working with Cochise County and all of our subcontractors,” she said. “Everyone has been great to work with.”

Goldman attributes a big part of Dollar General’s success in rural areas to the corporation’s focus on providing important staples that families need.

According to information available online, Dollar General netted $8.4 billion in the first quarter of 2020. The corporation markets to low income rural areas and relies on “a high volume of vehicle and foot traffic” for profitability.