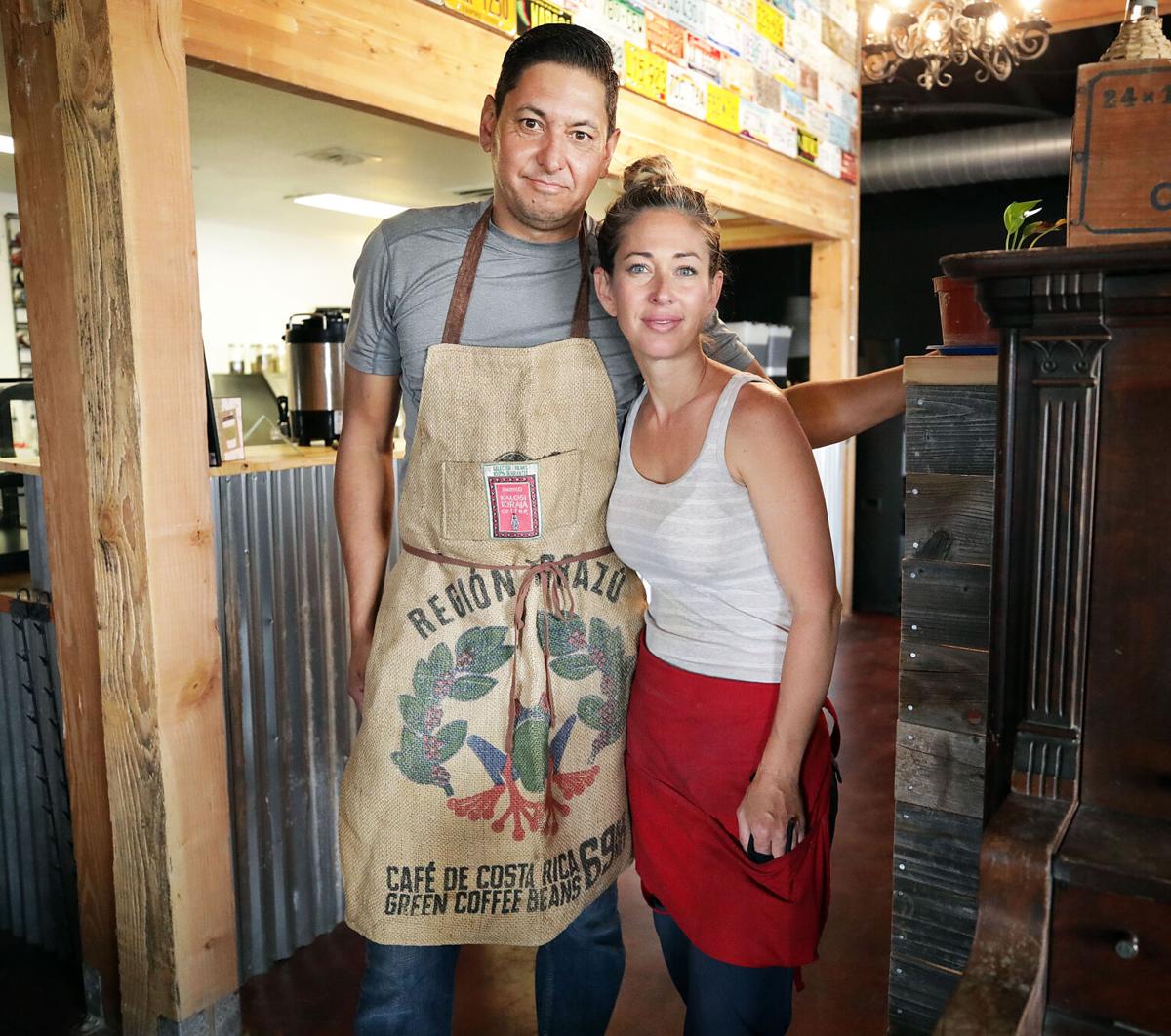 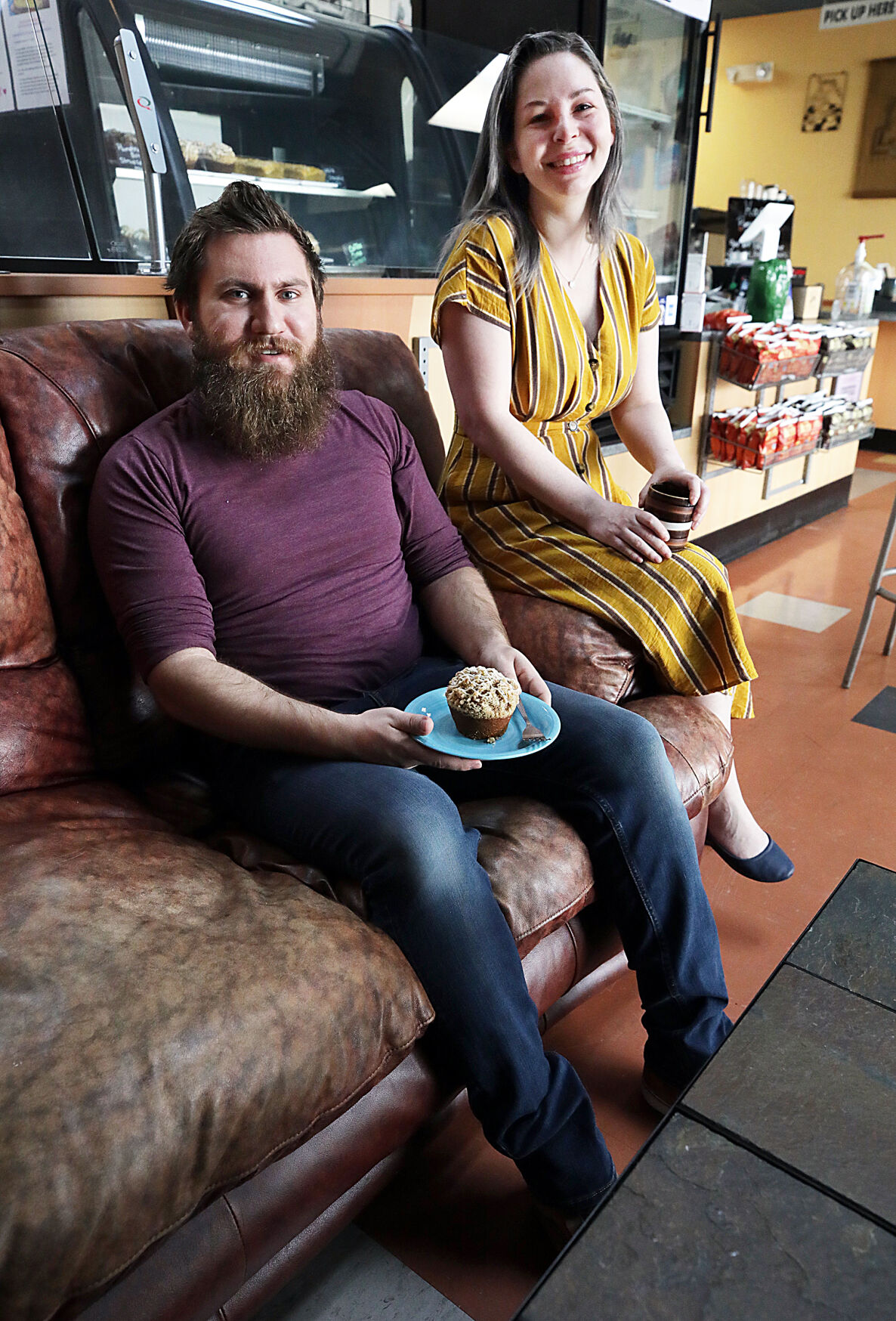 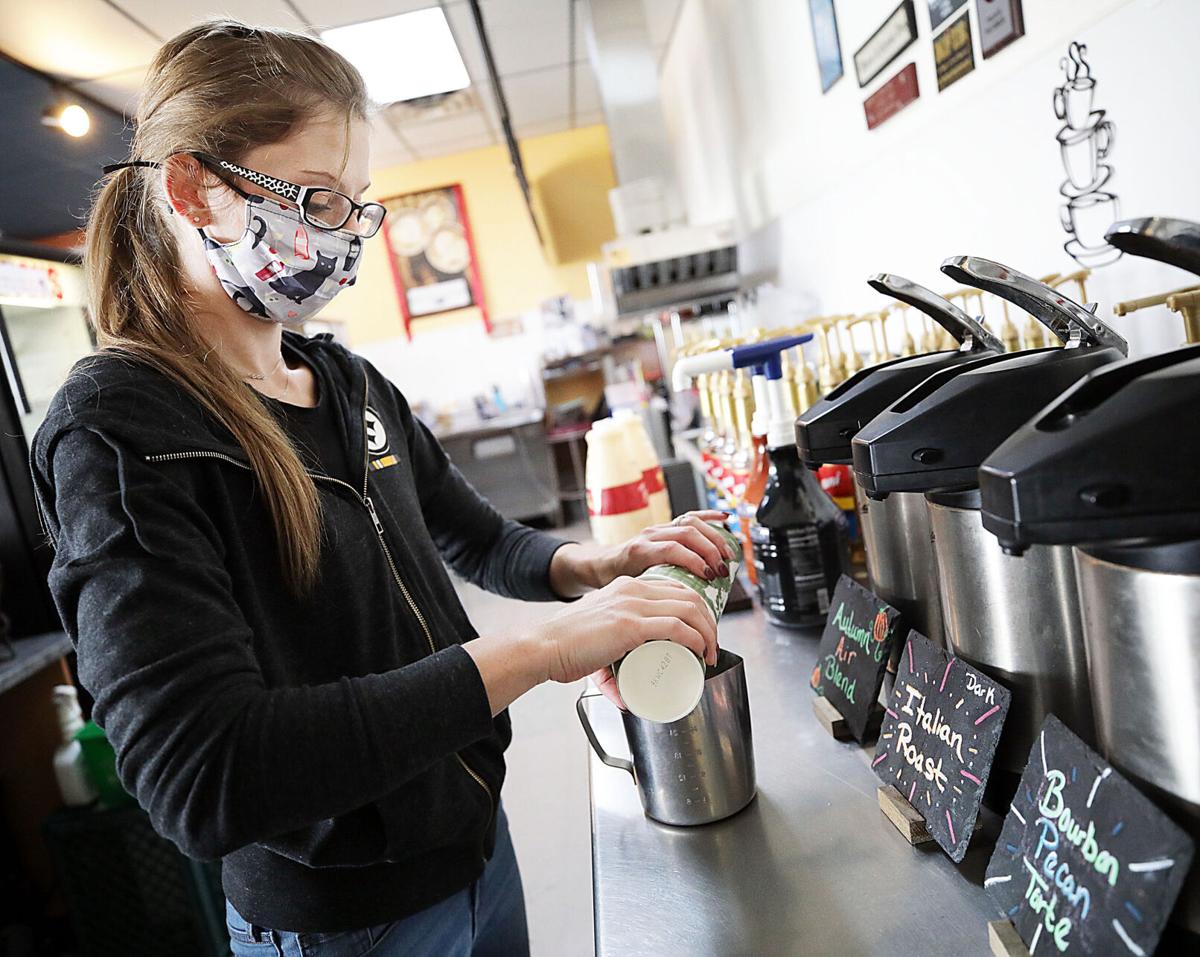 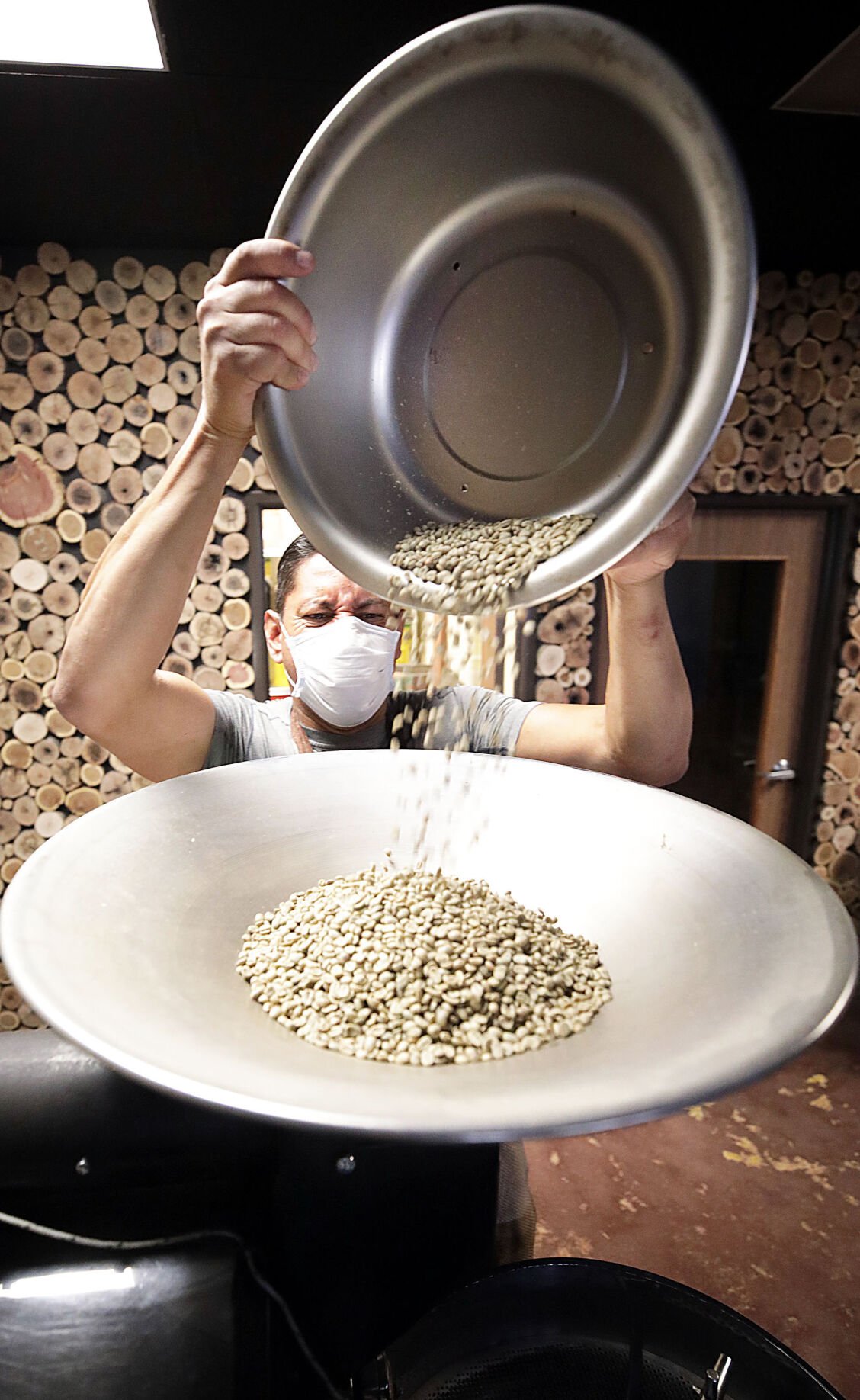 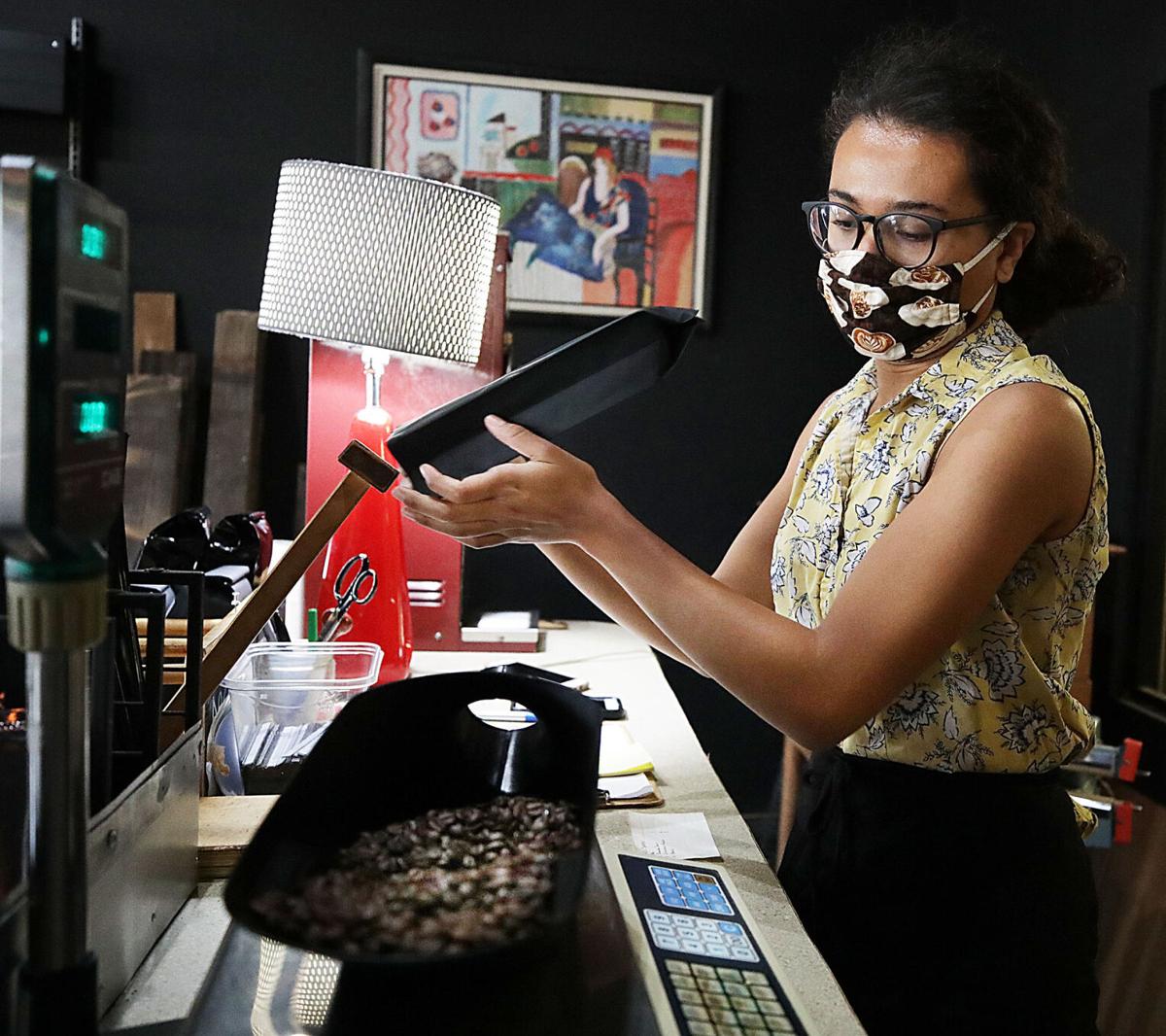 Lina Kennon packs an order of coffee beans at Urbano.

Lina Kennon packs an order of coffee beans at Urbano.

Changes have been brewing for two familiar area coffee houses the past few months.

Longtime Broxton’s Coffee regulars Julia and Daniel Pitts were at their favorite caffeine supply shop earlier this year in March when they heard a rumor that George Broxton was looking to sell his coffee shop. Broxton first began his coffee business on the Cochise College Sierra Vista campus then moved to his current location in 2016.

Daniel said, “We always love the coffee, he brought fantastic coffee here. George was having trouble finding a buyer though. We had this mutual reaction, “George, NO, you can’t take this from us! This is the best coffee this town has ever had.”

The couple, half jokingly, mentioned to Broxton that they were interested in buying. It was a done deal by mid April. “Well, here we are…that happened, pretty quickly!” exclaimed Daniel, while adding, “In the middle of a global pandemic, which has affected business exactly as you would expect it to.”

Julia went on to say, “It’s been challenging because of COVID because we haven’t been able to do all of the things we’d like. We’d like to renovate, possibly change locations at some point.”

Julia mentions that she had always wanted to own a coffee shop. She said, “One of my first jobs was as a barista. I did that for many years. I really like the vibe of working in a small local shop and to get out of the corporate thing.”

Daniel estimates the business is probably down some 70 percent of what it should be at due to the coronavirus. He said, “But we’re surviving. We’ll get through it.”

He will not be changing anything about the coffee stating, “It’s perfect as is.” Julia says, “We’re working on expanding to a breakfast, lunch and afternoon mid-meal menu with a Southern flair like gumbo, jambalaya and old fashioned Southern cornbread.”

The Pitts’ are going to renovate the shop’s look with a more modern, minimalistic and welcoming feel to it.

Daniel said they will be updating the menu drastically. “We’re keeping the signature drinks and adding our own while tweaking the formulas for some things here and there based off of customer feedback. We’re really just trying to make a really good place, great, or better.”

Somewhere down the road, as finances allow, the couple would like to move to a different location and rename the business while remembering it will still be a coffee shop. Pitts mentions that, “It’s still going to have the best coffee in town, we’re just going to have the best ‘other things’ too. Right now the priority is surviving.”

Pitts pointed out that the shop’s progression during the pandemic was consistently inconsistent. He did see slightly improving sales for two to three months. Unfortunately the second shutdown occurred and when August rolled around it was back to square one.

He cautiously observed that as September began signs of better sales were picking up slightly.

On a limited budget the Pitts’ are trying to advertise that the shop is open and under new ownership.

Daniel said, “We’re taking it on a day-to-day basis. This place has left a good mark on this town and we didn’t want to see it go away. We want to see it get even better.”

Jessica and Ricardo Sariñana originally opened their Brews Brothers coffee shop on the corner of Ramsey Road and Highway 92 in 2016. Jessica Sariñana mentions, “The first thing people want to know is why the new name change.”

She explained that the Brews Brothers trademarked name was in existence when the Sariñana’s purchased it. They have been attempting to trademark the name for themselves for quite a while, but were ultimately denied even after a lengthy appeal process.

The couple had to rethink a new name for their established coffee shop. The current website, which is still named brewsbrotherscoffee.com, will be transitioning to the new name. Coffee roaster Ricardo Sariñana talks about visualizing a new name for the coffee house.

Sariñana said, “We looked at a lot of different names and came up with Urbano Coffee Company. Sierra Vista is growing more towards the south. Although Sierra Vista is not a big city yet, it is growing and eventually will become an urban area. We liked the way it sounds and it is simple to pronounce. We are happy with the name and hope everybody is too and that it catches on.”

Jessica adds that the new shop’s concept is not from a small town. The new facility is larger than the old one, with a big city feel, which she says suits the new name.

At just about the same time as the name change was percolating, the building owners the Sariñana’s were leasing from wanted to sell. Jessica said, “We loved that little Ramsey spot, but we couldn’t reach an agreement. We found that the old Patio Pools location was for sale and the owner was willing to work with us and made it very easy for us to make the purchase.”

The Sariñana’s were able to recreate the homey feeling, complete with subdued lighting, in the new location which is reminiscent of the original facility. They are looking forward to sharing the new and improved atmosphere with customers when the remodel is complete.

Even though the remodeling process continues, Urbano Coffee Company is offering curbside service only with limited hours of operation on Monday through Friday from 7 a.m. until noon. The drink menu is the same as well as some new items including new delicious Keto drinks.

Jessica said, “Those hours will soon change to a broader schedule. We’re just trying to ease back into working again without employees. We have our daughter and son-in-law working with us and that’s about it.”

Inquiring people have been asking the Sariñana’s, “What about the pool?” Ricardo Sariñana explains that Urbano Coffee has devised a new concept called The Poolside Dinner for Two. Sariñana said, “It’s private. The customer will tell us what they want on the menu, what they want for music. Any special things they would like and we will accommodate that. It’s a complete custom romantic or otherwise dinner. The dinner comes with the use of the pool and hot tub. We’re excited about it and we are just barely starting it this week.”

The hope is that while following CDC guidelines and the coronavirus numbers continue to dwindle, Urbano Coffee Company should be opening their doors soon.

The Sariñana’s closed out by saying that they miss their customers. Ricardo said, “They are like family to us. We’ve really been affected by the disconnection from our customers. We are looking forward to having everybody back and to serve the community while providing them with the ambiance they love.”