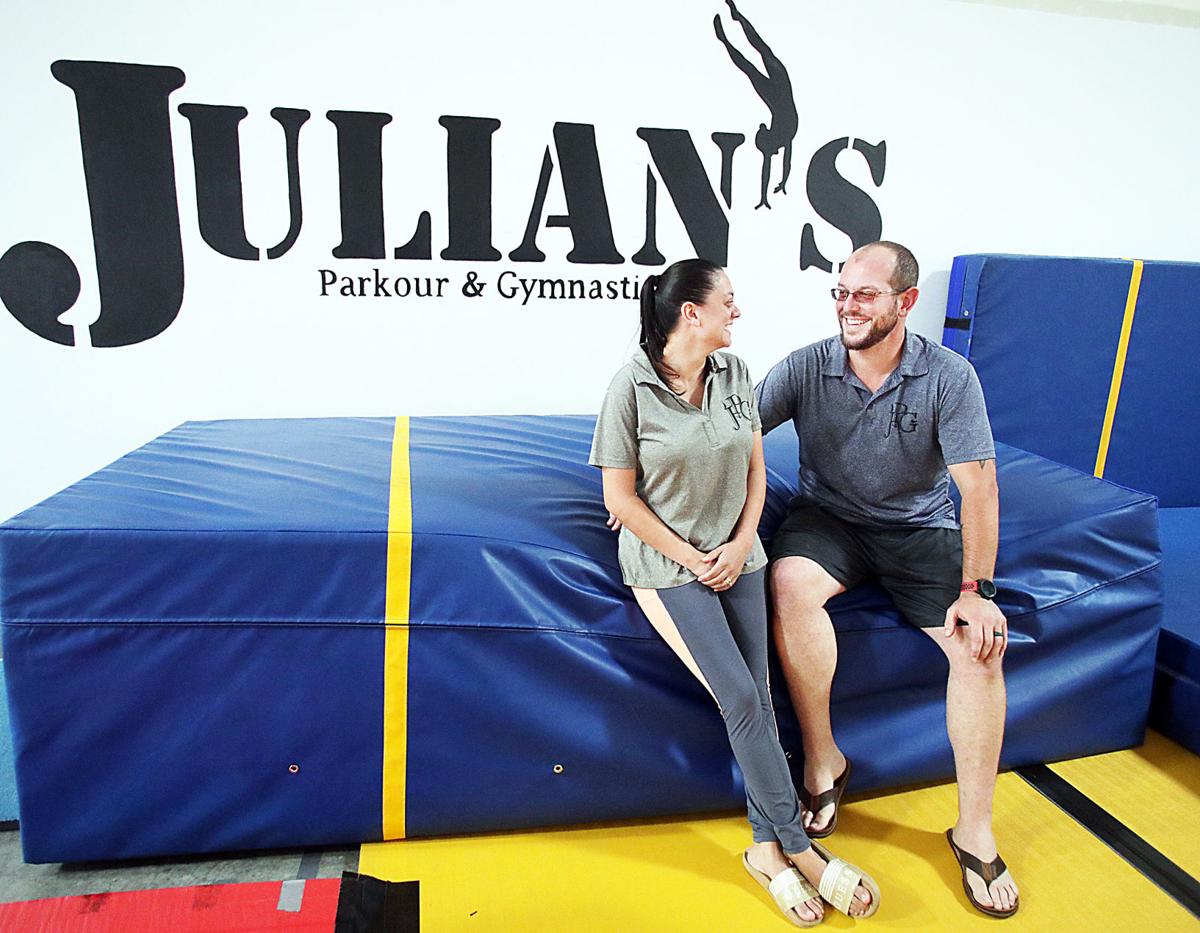 Nicole and Chris Julian sit in their Julian’s Parkour & Gymnastics studio Friday. The business had to close for a second time in recent weeks after Gov. Ducey ordered gyms and other recreational facilities to shutter in an attempt to slow the spread of the coronavirus. 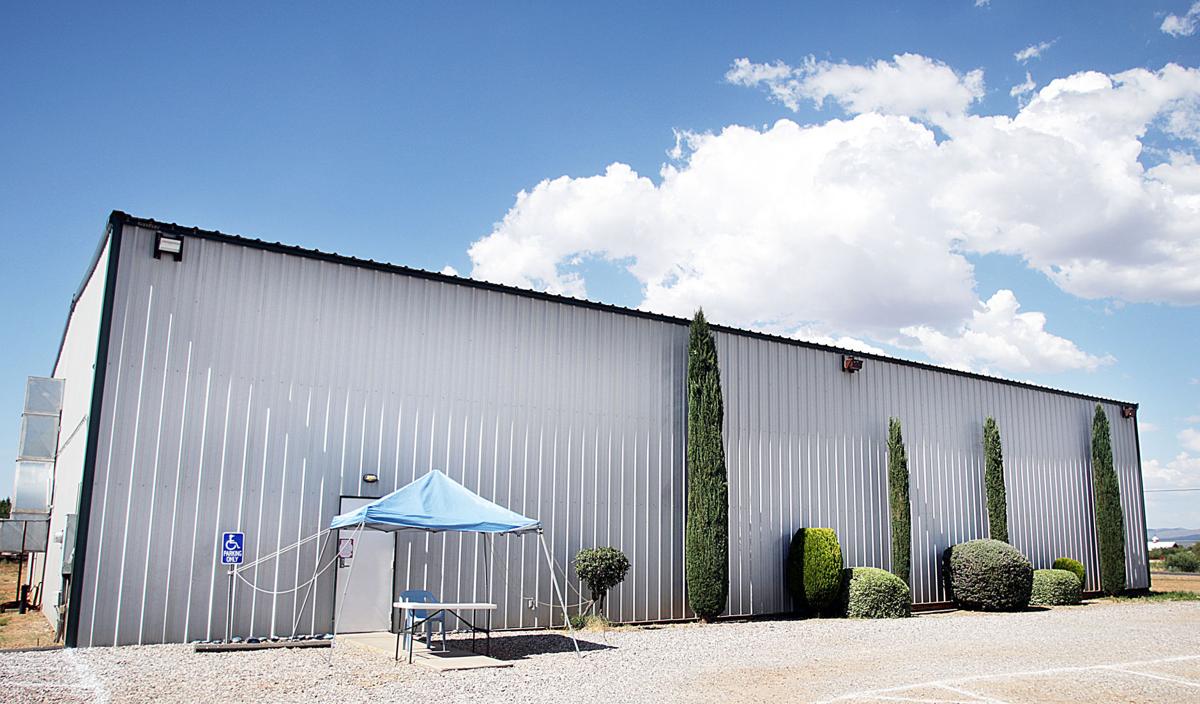 Nicole and Chris Julian sit in their Julian’s Parkour & Gymnastics studio Friday. The business had to close for a second time in recent weeks after Gov. Ducey ordered gyms and other recreational facilities to shutter in an attempt to slow the spread of the coronavirus.

SIERRA VISTA — Nicole Julian, owner of Julian’s Parkour & Gymnastics, didn’t think she’d have to close her business twice within the first year of turning her dream into a reality.

Julian, a gymnastic coach at her gym, was slowly getting back into routine when Governor Doug Ducey ordered “indoor gyms and fitness centers or clubs” to pause their operations on June 29 in an effort to halt the spike of COVID-19 cases.

“We’re being given this order and you have to do what’s best for the kids,” Julian said.

She said making calls to the few parents whose children returned to the gym after the first closure was the toughest part, because the kids wanted to be there and so did she.

Owners and local officials say vague language in Ducey’s executive order that reclosed gyms, bars and other recreational facilities has caused confusion and controversy across the state and the county.

The order states “indoor gyms and fitness centers or clubs” should pause operation until at least July 27, which has allowed loopholes to be found for outside gyms and businesses that don’t consider themselves as one of those three businesses.

On June 30, Desert Thunder Gymnastics announced on their Facebook they were remaining open because they didn’t fall under the “gym or gym club” terminology in the order.

“We have reached out to the AZ Gymnastics Club Owners group, who has stated that gymnastics centers are under NAICS classification as “Sports and Recreation Instruction”, much like dance, fencing, karate, ect,” the June 30 post by Desert Thunder reads.

The Herald/Review reached out to Ducey’s office for clarification of what is considered a fitness center or club and received the following statement from his media relations office: “If the gym, fitness club, or center is being operated to assist patrons in physical exercise, the establishment should pause all indoor operations.”

“Other uses may need to be addressed on a case by case basis, but the intention is for the order to be interpreted broadly to minimize high-risk opportunities to spread COVID-19.”

Carol Capas, spokesperson for the Cochise County Sheriff’s Office, said they too asked the governor’s office for clarification on what types of facilities are included. She said they were told gymnastic centers are included in the orders.

CCSO and the Sierra Vista Police Department are using this time to educate citizens and business owners on what the order calls for during first interactions.

“We have had a few calls with respect to business compliance with masking requirements, none that I am aware of that involved any of the fitness facilities around town,” SVPD spokesperson Sgt. Brian {span}Sebastian{/span} said in a statement to the Herald/Review.

“The police department is taking these calls as an opportunity to educate, and promote compliance and self regulation. By and large the Sierra Vista community seems to be doing a good job,” he said.

Capas said if a complaint is filed, deputies will go to the business and verbally educate the business owner regarding the order. If they still do not comply with the order, if deemed to be in violation, then CCSO will submit their report to the county attorney’s office to assess the case for possible punishment.

Capas said there are two businesses that have received visits from deputies for not complying with the order. A report has been submitted to the county’s attorney’s office for Desert Thunder Gymnastics and the other business.

Lonnie Rule, owner of Desert Thunder Gymnastics, declined an interview with the Herald/Review at this time but sent a statement via email.

“Just by watching the recent press releases and speaking with others, you can see that the interpretation of the Governor’s Executive order has created some confusion,” the statement said.

“Either way, it is of my opinion that all businesses and owners should support one another, allowing each other to make the decision that they feel is correct. While our community continues to strive to create some normalcy in these crazy times, our businesses also need to stay strong.”

“We need to support one another, so that when our families are ready to resume patronage with a business, that business is still in operation. We all love our community and we want Cochise County to be vital and full of ample opportunities for persons of all ages.”

Mike Strange, owner of Summit Fitness said as soon as the orders came he knew he had to close.

“There weren’t any adjustments we could make,” he said. “We had to close our doors.”

Strange said owners can control how many people come in and out of the gym at a time and can create the space needed for distancing, but weren’t given a long enough chance to try and make it work and keep people safe.

Sierra Vista Mayor Rick Mueller spoke with local gym owners about the order and their thoughts, and sent an email to the governor’s office so they have an idea how it is impacting a rural community. Mueller said he has not heard back from them besides acknowledgement of receiving the email.

Although Strange’s business is closed, he doesn’t have any qualms with the governor’s decision.

“If I was the governor, I would have done the same things he’s done,” Strange said. “Without public safety there’s no individual safety. We have to respect one another.”