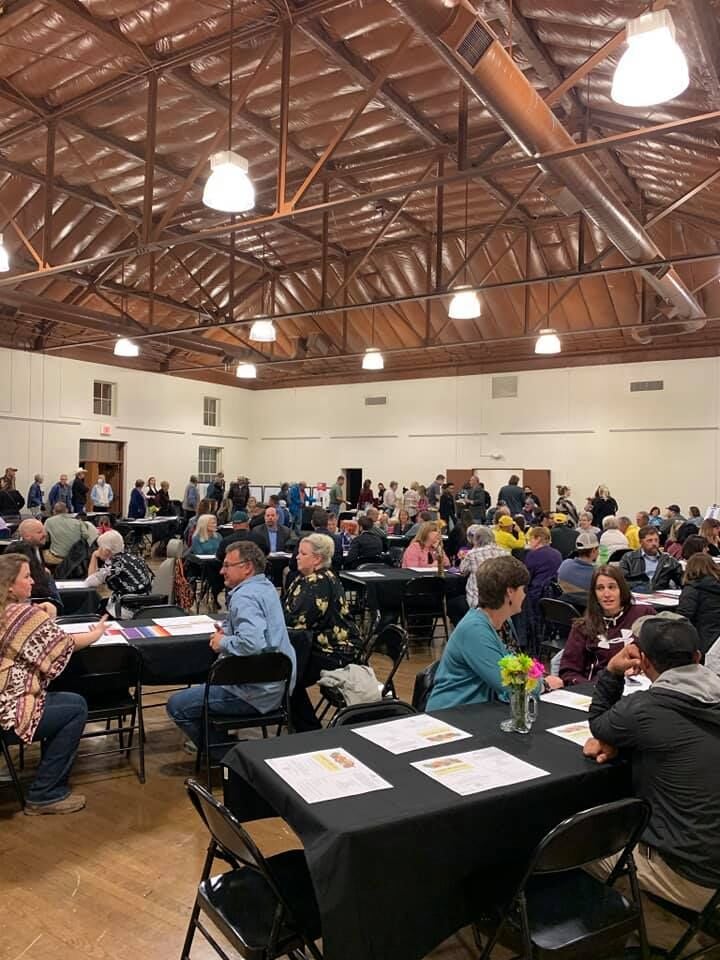 The State of the City Event drew quite a crowd at the Willcox Community Center. 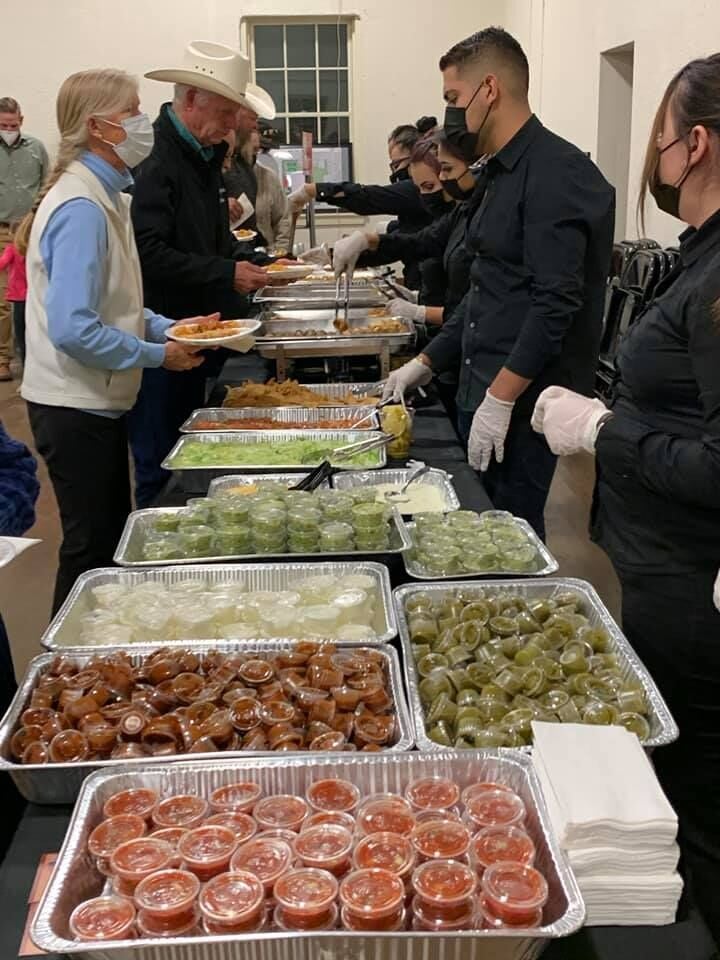 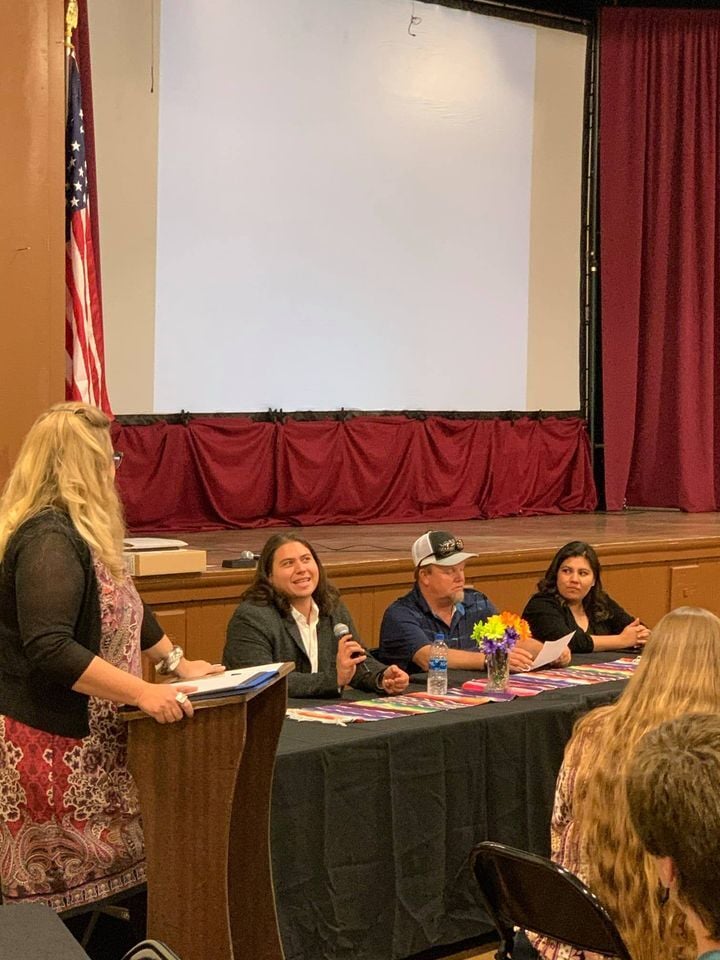 The State of the City Event drew quite a crowd at the Willcox Community Center.

WILLCOX — On Tuesday, Nov. 10, citizens of Willcox and businesses owners gathered inside Willcox Community Center for the 2020 State of the City event, which provided a representative taste of what each slice of Willcox’s diverse business community has to offer.

The program was presented by the city and the Chamber of Commerce in partnership with Sulphur Springs Valley Electric Cooperative. The latter provided a Mexican dinner from La Unica Restaurant and Tortilleria in Willcox.

The event featured a panel of business owners including Laura Castellanos, co-owner of Fresh Mart; Chuck Hoisington, board chairman and business consultant for Open Loop Energy in Safford; Mark Phillips, winemaker for Golden Rule Vineyards in Cochise; and Sonny Shores Jr., co-owner of the Willcox Livestock Auction. They were asked questions by the moderator for the event, Mary Peterson, Chamber of Commerce board member.

Throughout the Q&A, each business owner detailed why they chose to take their business to Willcox, what makes the culture of the city of Willcox so different compared to other parts of Southern Arizona and life lessons they have learned from others.

Hoisington addressed his background in Arizona.

“I moved here 29 years ago to southeast Arizona,” Hoisington said. “Literally, like a gypsy on a wing and a prayer and started a trust with three employees. Now it’s close to 200 employees ranging from Winnemucca, Nevada, to Farmington, New Mexico to Lehi, Utah, Willcox, Arizona, and Safford, Arizona.”

Peterson asked Hoisington to identify a round black object seen in slides from his business, so Hoisington elaborated.

“What she asked about is a hydraulic accumulator,” he said, “which we acquired three years ago from a company in southern California. You can imagine what southern California is like to do business. It’s not the most friendly place. They have several layers of regulation.

“We wanted to get rid of inspections at the city and county level. Then there’s the state level.”

Hoisington told how he ended up bringing his business to Willcox.

“Funny story,” he said. “I was speaking for the Arizona First sponsors. We mentioned that we were looking for a new place to relocate and the new Willcox city manager gave great personal appeal. Was the first in line. Was the first one to talk to me, from the council sitting in that room.

“So kudos to Caleb (Blaschke). So everybody was looking around and we wound up here. I was the one to say I can’t believe I moved to southern Arizona and I wound up in Willcox. So proved to be a good area. No. 1 it was the rural community. No. 2 was where it was located. On a major route. On the I-10. I think that’s the major ones.

“It was located close to my management team that was trying to commute from Winnemucca, Nevada. We’ve struggled with that at times, even from New Mexico and Lehi, Utah. We need a new place and Willcox will be it. I think it was just a lot to offer.”

“I moved down here about five years ago and I always said that I want to die in southern California because I always lived there,” Phillips said. “Willcox has been such a welcoming place, and it’s one of those places that I never thought that there would be so much opportunity here. Time after time there have been so many options for me. Plus now owning a commercial and being reinvigorated into the downtown area.”

Phillips wants to forge his artistic identity with his wine while at the same time being able to pick the brains of his fellow “faction” of Willcox and Cochise County-based wine grape growers and winemakers.

“You go so much for me for one vineyard,” he said. “We also make wines for some other people. Strive Vineyards and Birds and Barrel, we both work together to make wines in a more elaborate environment. That’s what I think I really strive for for us. Having a place businesses can pool from and collect from as a resource and share your knowledge to really help empower each other. So all of our businesses are kind of a co-operative faction.”

Castellanos said the community is willing to help. Phillips said the emphasis on agriculture is a plus.

“So business has been really good,” he said. “Having more wine then we’ve ever had before. It’s just been going really well.”

“For me I think it was a lot easier to do something that was truly my own,” he said. “A lot of things in the wine industry are traditional and they have a lot of expectations about how you’re supposed to do things. How you’re supposed to make it. The thing is, out here in Willcox, I had the opportunity to do what I wanted to do.

“For me it’s about opportunity while respecting the land around here. I wanted to have a little bit of that local side to it. I think it’s good to have Willcox still be Willcox.

“I mean, I don’t want it to become a place like Napa.”

Shores Jr. talked about riding out the storm when the livestock market has been down and how that factors into business during the COVID-19 pandemic.

After the panelists, Blaschke, the city manager, spoke to Willcox’s “quality of life.”

“Economic development has kind of flopped. It used to be based on the riches. Now this newer generation that is coming along. They spread about the quality of life,” Blaschke said.

“The quality of life things like the park. They care about those kinds of things. What are the children going to do if they’re not in team sports? There has to be something else for them to do.”

“So the city of Willcox has really been focused on helping people understand that there is an amazing quality of life here in our community. So we’re really trying to advertise that, but I just want to show everyone the connection that that has. We wouldn’t be able to do a lot of these things without our community. Without the businesses.”

“Unfortunately they just passed the basic budget,” Blaschke said. “COVID happened two weeks before they passed the budget. As a result, Sen. Gowan still got some coordination with ADOT. ADOT managed to put down $300,000 to do a total rebuild. So what you see now was very versatile for our community. It was a huge impact to fill in some spots along our road. So thank you to him for that. We appreciate it.”

“First of all I’d like to thank everybody in here,” Laws said. “Without you in Willcox ... We’re so glad that you chose Willcox to be your home and start your businesses. We do everything. The council does everything to say yes to you. We’ve never said no so far. We’re a yes council. We want things to grow.

“The jobs and everything. People love our weather.”

Laws presented Sally White, Willcox Against Substance Abuse founder, with the Volunteer of The Year award.

“We have an individual who was born and raised in Portal, Arizona,” Laws said. “Attend Willcox High School. Raised five children in Willcox. Funded WASA in 1988 from a grant through the governor’s office.”

He remarked how the program is still going strong and has created more like it, thanks to people like White.