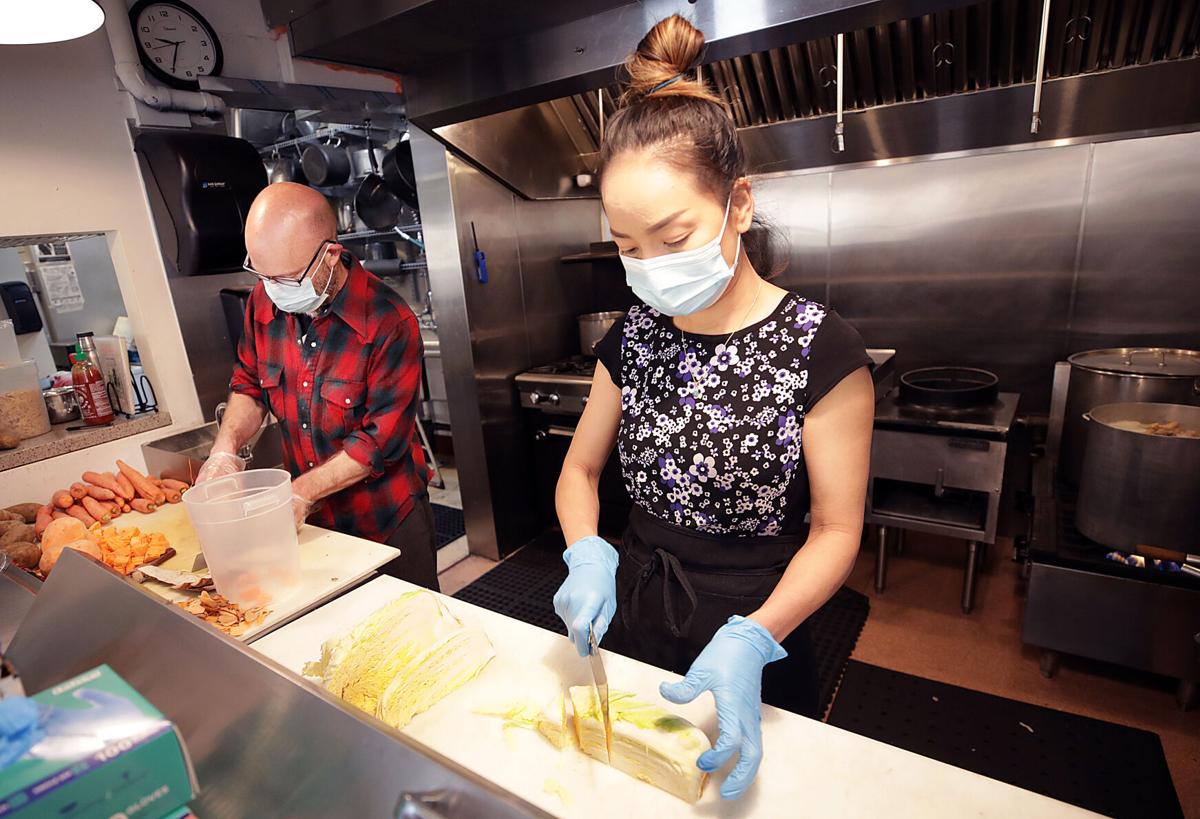 Thuy Dang gets ready for the lunchtime rush recently with husband Tom Holtz. 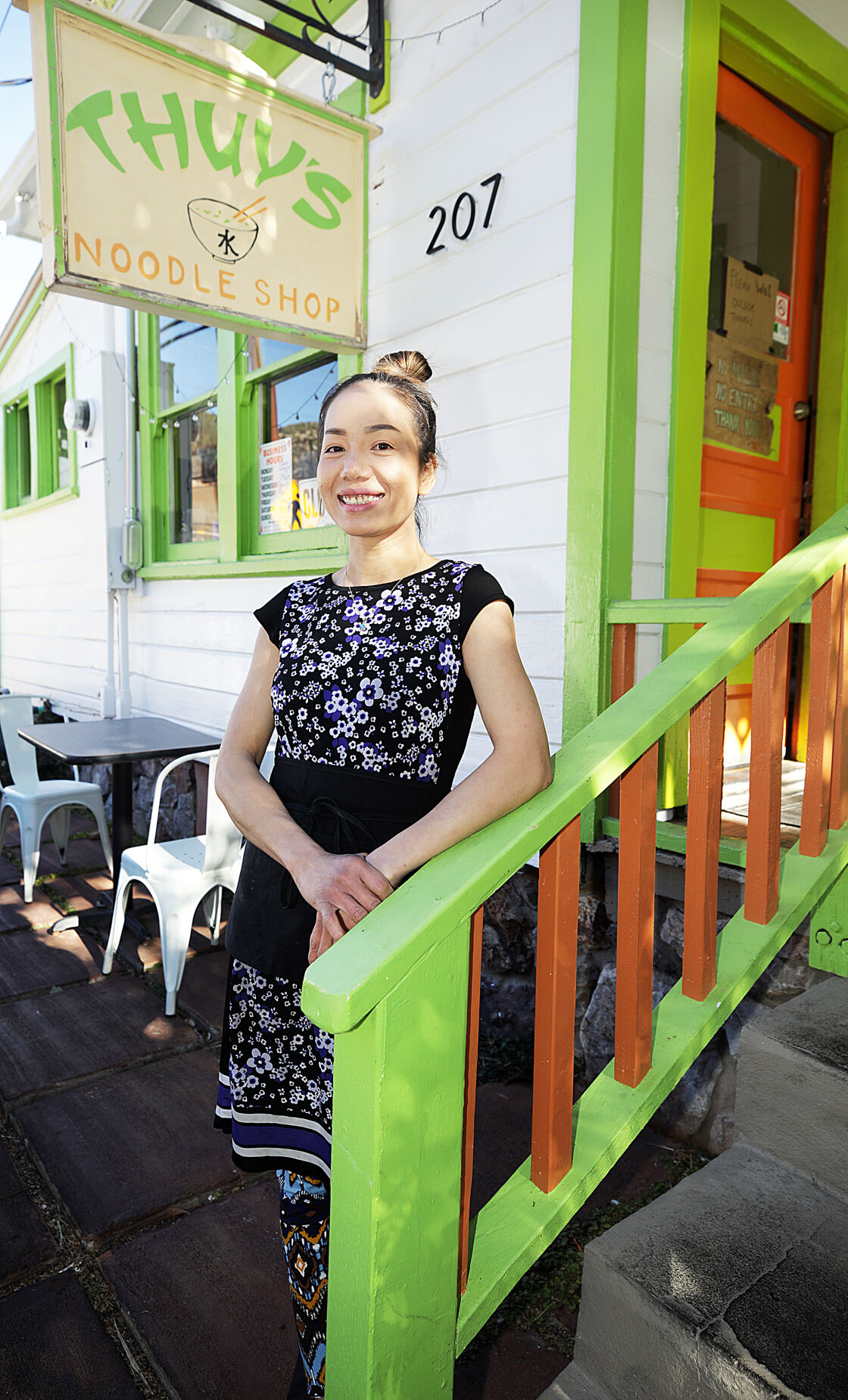 Thuy Dang stands in front of her Bisbee business. 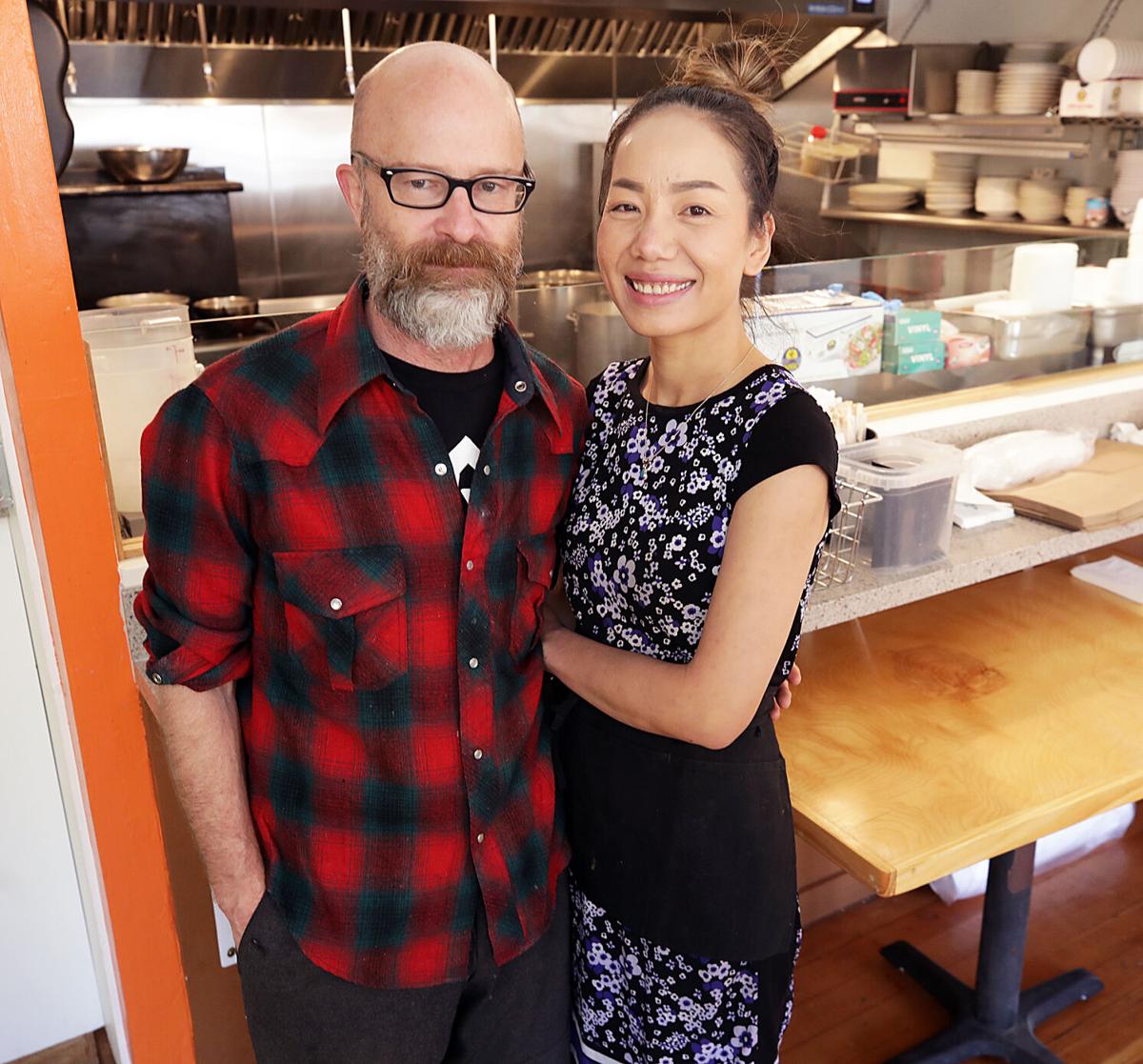 Tom Holtz and Thuy Dang inside their Bisbee restaurant.

Thuy Dang gets ready for the lunchtime rush recently with husband Tom Holtz.

Thuy Dang stands in front of her Bisbee business.

Tom Holtz and Thuy Dang inside their Bisbee restaurant.

BISBEE — Thuy’s Noodle Shop opened its doors in a tiny spot on Naco Road in 2013 with hardly enough room to seat all who wanted to try Bisbee’s only Vietnamese restaurant.

Nine years later, Thuy Dang and her husband, Tom Holtz, moved their eatery up the canyon across from the county courthouse and opened their door for the first time last year in March just as the COVID-19 pandemic and stay at home orders hit the state.

“At first I was worried,” said Dang. “But, we still had people coming for takeout, like the old place.”

Unlike the old place, Dang now has a full kitchen where she cooks up some of her popular made from scratch soups, special dinners and, of course, fresh and fried rolls. They also have heat and air conditioning.

“It would be too hot in the summer,” she said. “I would feel sorry for my customers.”

And then there was the electrical problems and frequent flipping of breakers at her former location.

Their new home laid vacant for about 10 years. It was once a home and a bakery. On a walk around town Dang saw it and set her mind to buying it. The house took an extreme amount of work to bring it up to her standards.

The place was filled with trash and the trees out front were overgrown, almost hiding the house. But, with some TLC and a lot of elbow grease, paint and new appliances, they finally were ready to open, at least for take out.

Thanks to those new appliances, which include a charbroiler, she now offers some grilled pork dishes.

“There wasn’t room for so many things at the old location,” said Holtz.

One morning, they were furiously chopping vegetables getting ready for the day. Soups simmered away on the stove.

Pho (pronounced “fa-ah”), is one of her specialties and gives her the taste of home she missed. It is a rice noodle soup that is a daylong process she makes from scratch, Holtz explained. She gets to the restaurant early to make the noodles and brew the broth made with pork, beef or chicken.

The process takes hours — there is a lot of skill and knowledge involved. Each day there’s a different soup simmering on the stove. She also makes a veggie version for those customers who prefer to forego meat. The focus is to provide customers with the highest quality Pho possible.

Dang offers four varieties of her fresh and fried rolls made with various ingredients. One has pork, shrimp, cucumber, green leaf lettuce, cilantro and mint. She serves it with a hoisin peanut sauce. There also is a veggie fried roll with tofu, mushrooms and vegetables, served with a sweet chili sauce.

Since Bisbee is known for its coffee junkies, she also offers a unique Vietnamese iced coffee, strong, with a full, robust flavor made sweet by evaporated milk.

Dang and Holtz met about 14 years ago at a café in Saigon when he was in a teaching program. They hit it off, but he returned to the states without her.

He returned to his Prescott home and applied around the state for work. The Cochise County legal defender’s office had an opening and he was given the job. He fell in love with the old mining town and people in it. But something was not quite right.

“I loved Bisbee and the Mule Mountains, but I really missed Thuy,” he admitted. “She was the woman I wanted to marry.”

She made it to Bisbee in 2011, and they held the ceremony shortly after her arrival. Even though she loved her new home, she missed the foods of Saigon, so she opened the first tiny restaurant.

“I loved her, and now everybody else does, too,” he said.

She, too, has come to love her new home and the people in it.

“They make me feel like family. And I was worried that no one would understand me. I know a little English, but sometimes I don’t know the right words. Everyone is helping me learn,” laughed Thuy. “Sometimes I forget the right words and start talking to the employees in Vietnamese. I think we are teaching each other our languages.”

Her resolute determination to provide the best food possible has her working 14–hour days, but you’d never know it. She shows no signs of the stress of long hours.

This petite woman from Vietnam fits in like an old friend and the joy she brings with her love of cooking makes Thuy’s Noodle Shop one of the most pleasant dining experiences in Bisbee.

Take out or dine on the patio.