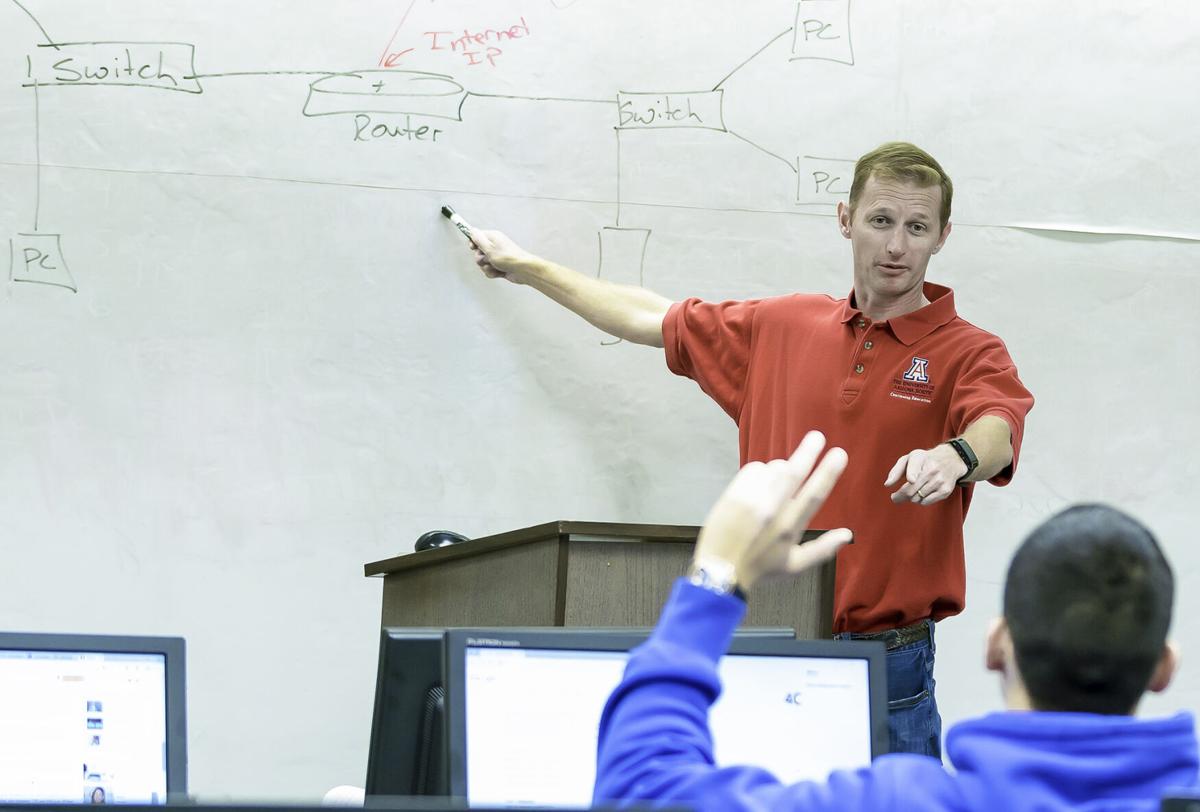 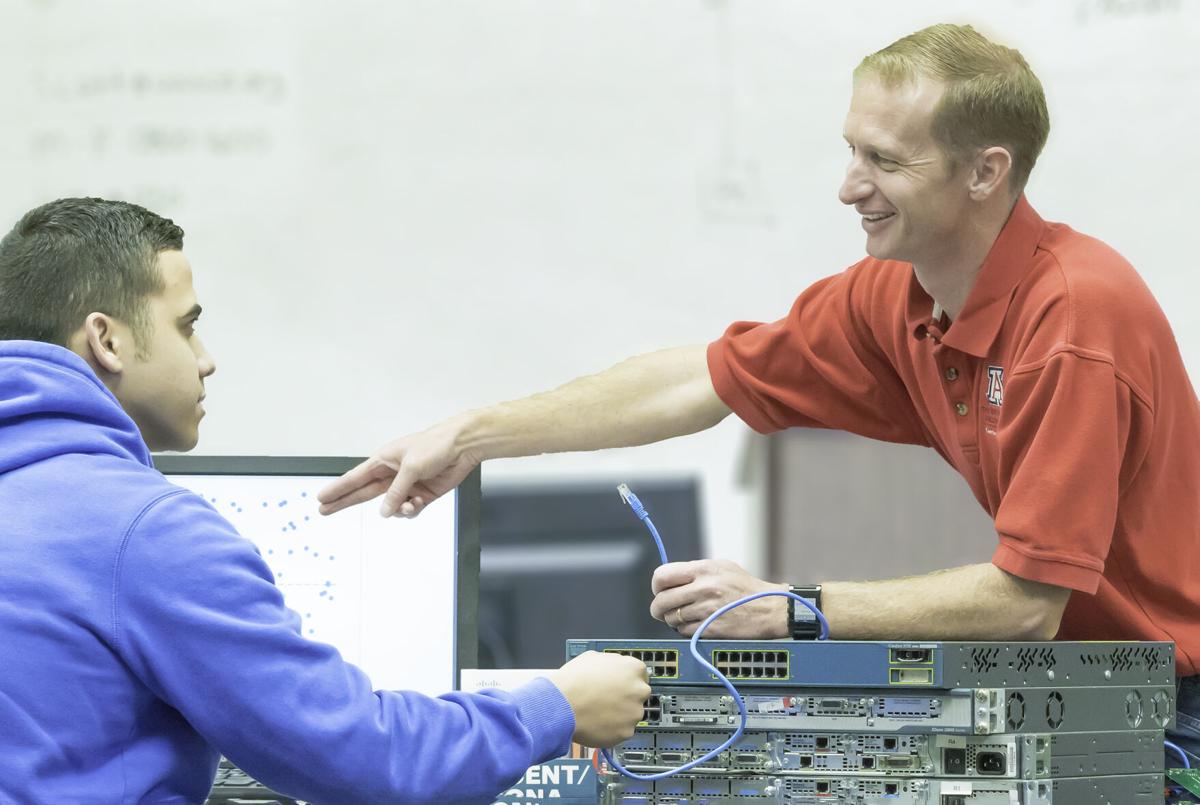 Dr. John DeLalla works with a student during a class segment on routers. 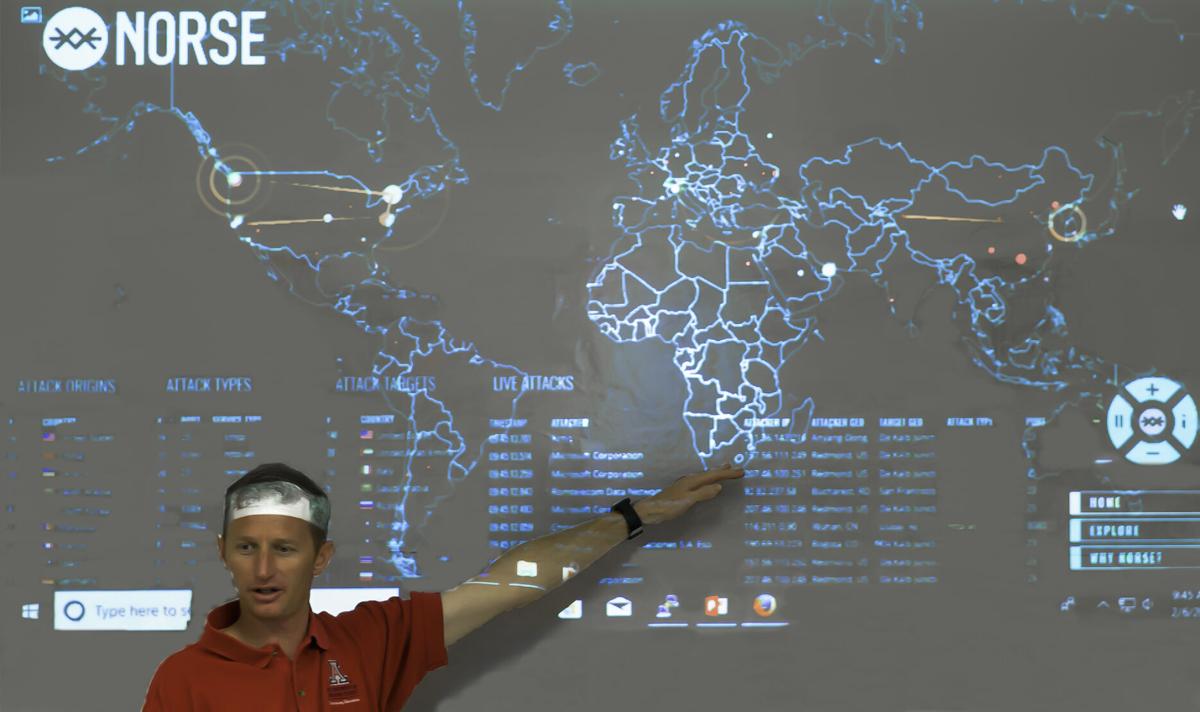 Military operations were covered in one of Dr. John DeLalla's pre-pandemic classes.

Dr. John DeLalla works with a student during a class segment on routers.

Military operations were covered in one of Dr. John DeLalla's pre-pandemic classes.

Pick an industry, just about any industry, and the workforce expectations are nothing like they were 20 years ago. In some cases, even five or 10 years ago.

What you had, or what you could do, doesn’t get you quite as far these days. Throw in rapid technological advances and a pandemic, and the change cavalcade only looks to be ramping up for the future.

To keep pace, many will require additional training, a return to school and books. Dr. John DeLalla wants you to know he’s here to help.

DeLalla is the program director of the University of Arizona’s Continuing and Professional Education department in Sierra Vista. Information technology, cyber security, law, health and project management are just a few of the classes offered. The overall concept, according to DeLalla, goes beyond that.

DeLalla outlines the educational progression. It goes from perhaps a start at Cochise College, moves to a four-year school for two years and then takes a look at a grad program.

“That’s what continuing education is,” DeLalla says. “It’s that extra plus up on top of your degree to make you more employable. Also, the first step into the university for a lot of people. They were in high school; they joined the Army; they saw the world, they retired from the Army at age 38 or 39. They are in line to be promoted to a higher-level job, they are told they need an industry accreditation or certification or degree, and that’s when the UofA comes back into play.

UA began a continuing education program in Sierra Vista in the 1970s, with instructors making the 76-mile drive from Tucson to teach engineering. In the 1980s the school branched out into nursing instruction, DeLalla says, and in the late ‘80s the campus on Colombo Avenue near Cochise College was built.

In 2004, DeLalla left the main campus in Tucson and started the continuing education program in SV. The initial offerings were professional development for engineers from Fort Huachuca. DeLalla says for 15 years UA Sierra Vista had the largest continuing education program in the state, later offering classes in project management, trade and technology certification, leadership training and development training for border patrol agents and Sprint phone employees.

“Essentially, I think of continuing ed as the ‘junk drawer’ for the university,” DeLalla says. “If it doesn’t fit into a degree or a dorm or an athletic program, it’s in my department.”

All was going well. The program was self-sufficient, receiving no state money. Classes held 15 to 20 students at a time, whose tuition included a sumptuous lunch plus coffee, soft drinks and snacks in the classroom.

Then, COVID-19. Before that, the Continuing and Professional Education department had no online instruction.

“We moved (totally) online in March of 2020 as a response to COVID and a response from the university to take everything online,” DeLalla says. “It took us about five weeks to get scaled up and fully online. We did our next class in a virtual environment and the instructor for that class was in Texas at the time.”

For classroom instruction, university faculty are used, but DeLalla also brings in industry experts. The normal scheme for was an outside instructor to spend a week in Sierra Vista, teach a five-day, 40-hour class, and return home. That changed, big time.

“We did the entire class virtually, entire lab,” DeLalla says. “For a wireless security class, we learned how to set up enterprise level Army networks that were ad hoc and fixed inside an aircraft belly in Afghanistan, Iraq. They learned how to do that on the fly, they were not in a classroom and it was a week of 40 hours and they were done. We’ve been online ever since for all our professional development series.”

Of course, there are good and bad aspects about not being in a classroom.

“Disadvantage No. 1: I can’t see what the student is confused about because I can’t see their face as well because of the video quality and I can’t see what their monitor actually shows me,” DeLalla says. “And we’re losing the informal network communication. One of the benefits of coming to class was to talk on breaks, to talk outside, to talk at lunch with your instructor informally: ‘Here’s what I have going on, what do I need to do?’”

There are other benefits as well.

“For people who are career changers, career advancers, you use professional development sessions like this to network and meet new people from other commands and get pay raises and learn more. And now that’s gone. We’d have a lot of (job seekers) come to classes and they’d meet the hiring managers, they’d meet the bosses from Fort Huachuca. If they had a good personality, the technical skills, they’d leave class on Friday with not only a certification in most cases but a job offer as well. Now, they leave with the certification only.”

On the other hand, the audience has reached new plateaus.

“The advantage is now we are reaching a worldwide audience,” DeLalla says. “Whereas before you had to physically travel to a little tiny corner of Southeast Arizona, the hummingbird capital of Sierra Vista, to get to your class … and you didn’t know, you thought it was a suburb of Phoenix, you thought it was Scottsdale. And now you’re coming here driving forever and ever, you’re like ‘Oh, Huachuca City, it must be here … no, I guess not.’”

DeLalla touts that, thanks to Zoom, classes can be taken at the student’s leisure because they are recorded. Classroom texts are in PDF form and are available at the time of registration, which means a student can prepare in advance for a class that may not commence for another month. There even is the option to take the class a second time.

“Normally, you just waited,” DeLalla says. “Now, (the student is) reading the material. He’ll show up for class in March and he’ll be asking some really intelligent questions. He’ll be really smart the first day of school.

“We’re serving a worldwide audience now, were bringing the University of Arizona brand to a larger spectrum, we are meeting the needs of more people for career advancement.”

DeLalla believes returning to pre-COVID conditions just are not viable.

“I think all our classes in the future, even when there are people in seats in the classroom, are also going to be live on Zoom,” he says. “It’s simply a way to meet the needs of people who are out of town or don’t feel comfortable being in the classroom. I think we essentially are going to have — the Army would call it VTC, virtual teleconference — in the university structure we call it ITV, instructional or interactive television.

“Now we call it Zoom for short. I think every class is going to wind up having a camera mounted in the back of the room showing them what’s in the monitors and the camera will have a little ‘follow me’ thing on the instructor just like you used to watch hockey where the cameras would automatically follow the puck.”

“And the instructor is going to be wearing a mic,” DeLalla says.

“And he’ll have to remember to turn it off when he goes to the bathroom or goes on break.”

To learn more about the University of Arizona's Continuing and Professional Education (1140 N. Colombo Ave.), visit https://sites.google.com/site/uasceorg/ or contact Director John DeLalla at 520-732-2447 or email at jd@arizona.edu.