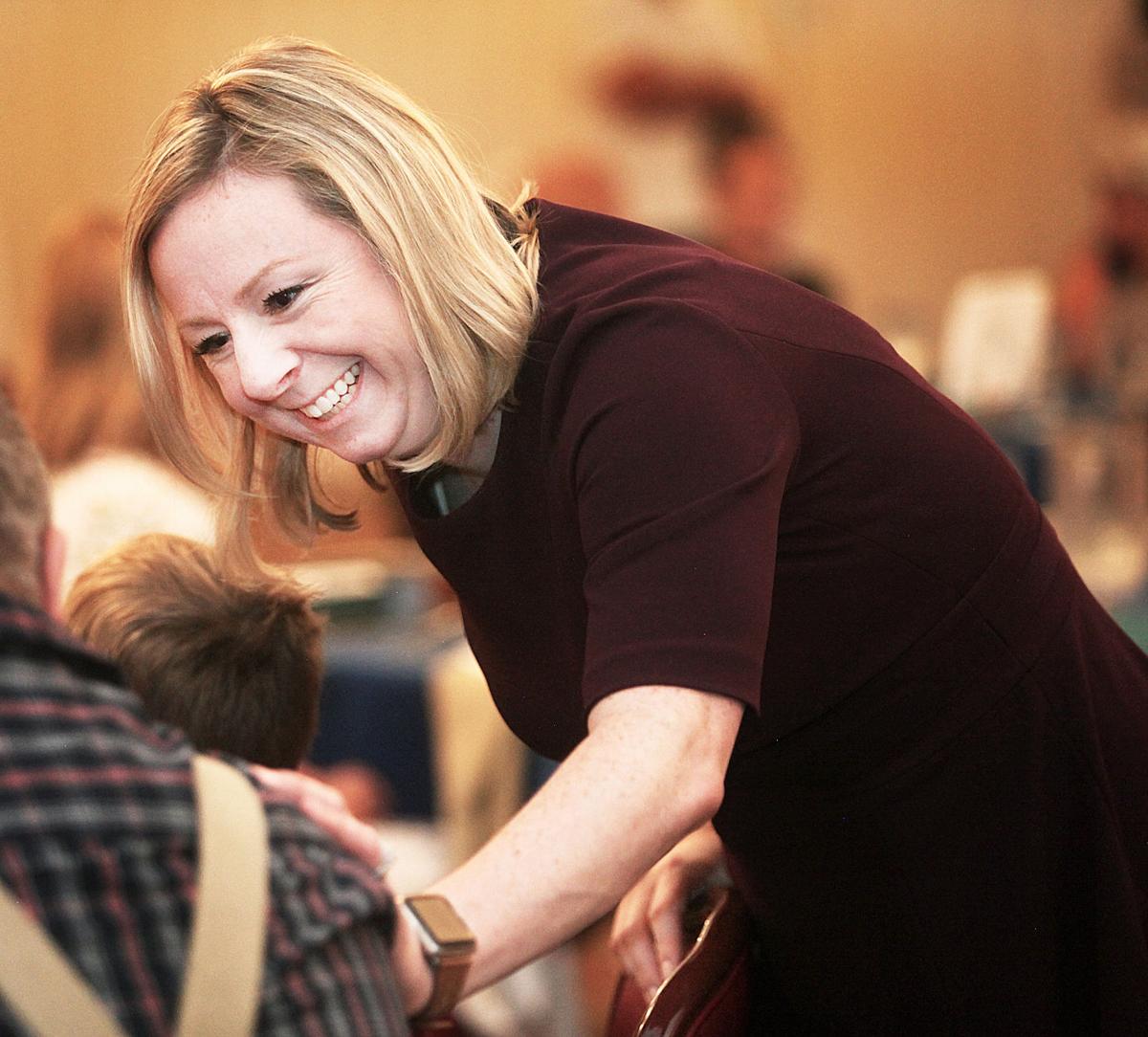 Twenty Under 40 recipient Carolyn Umphrey was named the Young Professional of the Year at Thursday night’s Herald/Review gala on Fort Huachuca. Umphrey owns Pups With Style dog groomers and sits on the Sierra Vista City Council. 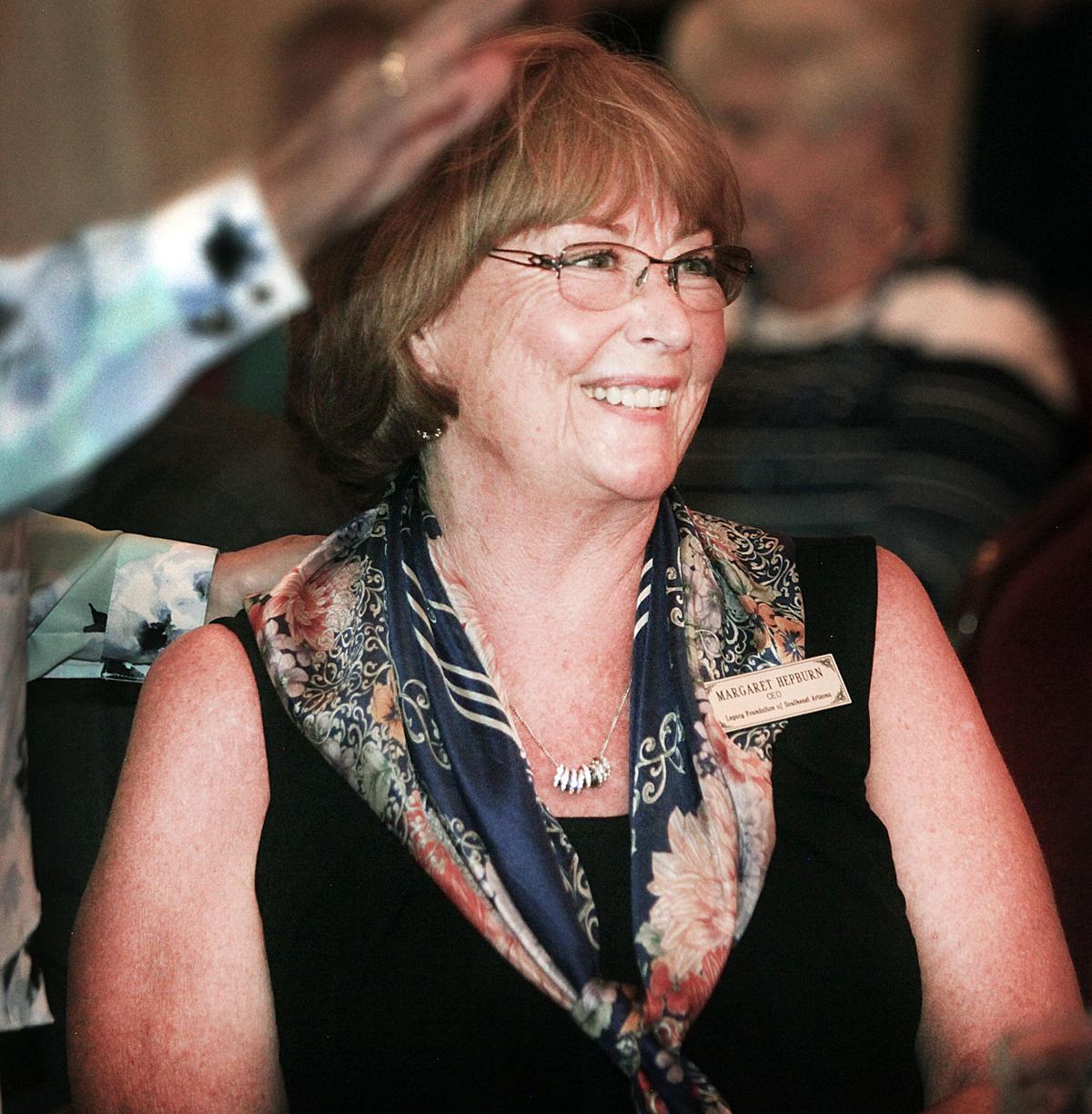 Margaret Hepburn, CEO of the Legacy Foundation of Southeast Arizona, interacts during Thursday evening’s annual Herald/Review Twenty Under 40 and Citizen of the Year event held at the Thunder Mountain Activity Center on Fort Huachuca. Hepburn was named the 2019 Citizen of the Year. 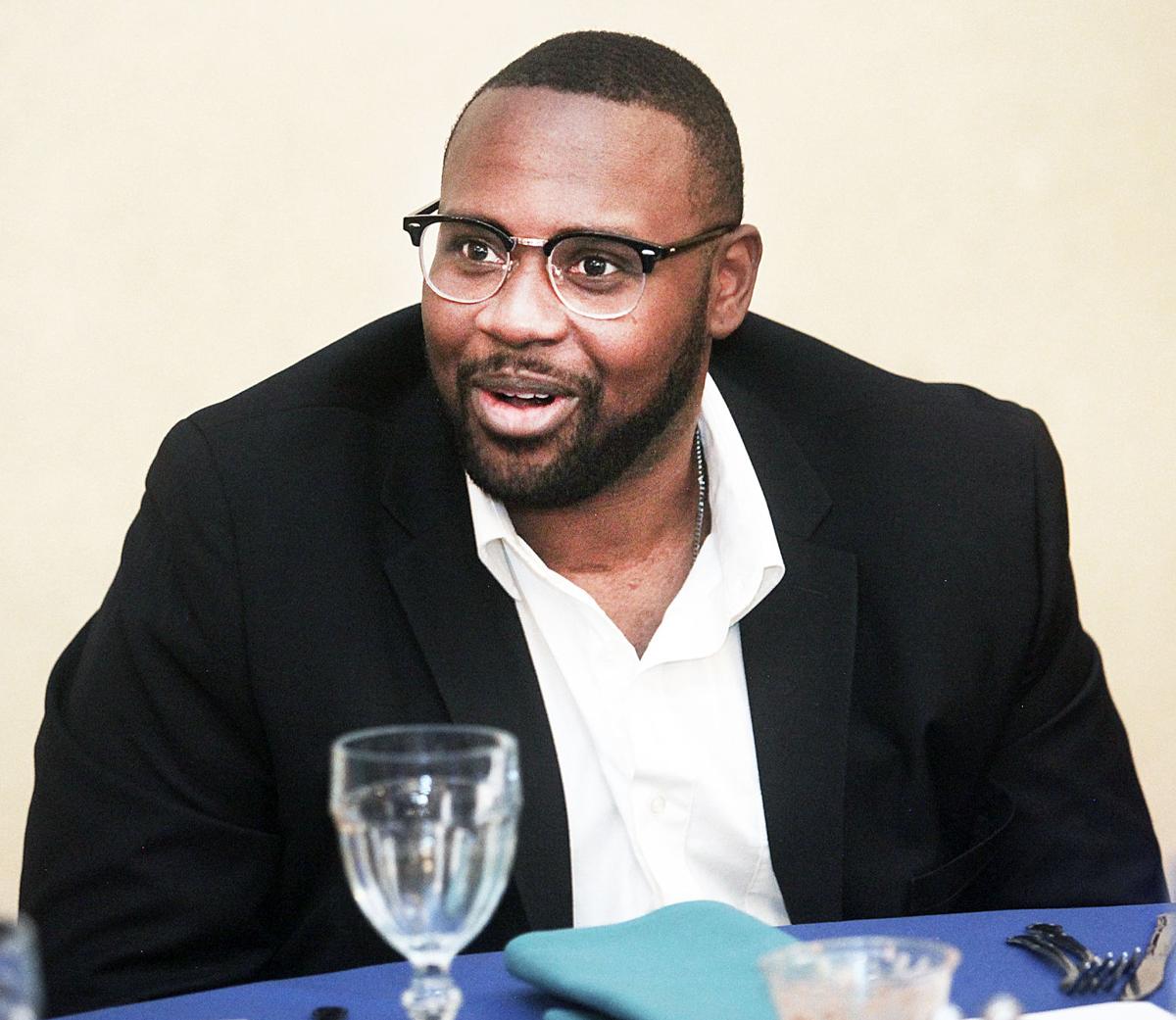 Twenty Under 40 honoree Detric Miles was recognized for his work as clubhouse director for the Boys & Girls Club of Sierra Vista.

Twenty Under 40 recipient Carolyn Umphrey was named the Young Professional of the Year at Thursday night’s Herald/Review gala on Fort Huachuca. Umphrey owns Pups With Style dog groomers and sits on the Sierra Vista City Council.

Margaret Hepburn, CEO of the Legacy Foundation of Southeast Arizona, interacts during Thursday evening’s annual Herald/Review Twenty Under 40 and Citizen of the Year event held at the Thunder Mountain Activity Center on Fort Huachuca. Hepburn was named the 2019 Citizen of the Year.

Twenty Under 40 honoree Detric Miles was recognized for his work as clubhouse director for the Boys & Girls Club of Sierra Vista.

SIERRA VISTA — A dog groomer who moonlights as a city councilwoman and the CEO of a local philanthropic foundation who played a key role in bringing Canyon Vista Medical Center to Sierra Vista were named Young Professional and Citizen of the Year, respectively, at an awards banquet Thursday.

Carolyn Umphrey, 36, who has owned Pups With Style since 2009 and is currently serving her first term on the Sierra Vista City Council, was chosen from a select group of young movers and shakers as the Herald/Review’s second-ever Young Professional of the Year. Meanwhile, Legacy Foundation of Southeast Arizona CEO Margaret Hepburn was tabbed from among impressive company as Citizen of the Year.

The women were honored at Thursday night’s Twenty Under 40 awards banquet, presented by Herald/Review Media in partnership with lead sponsors Sulphur Springs Valley Electric Cooperative and the University of Arizona.

After receiving her award, the final recognition of the night, Umphrey was emotional, fighting back tears.

“I’m pretty shocked, because everyone is so impressive,” she said as attendees smothered her with congratulations and well wishes. “I thought any one of them would be it and not me. Really, I’m in shock. I’m trying not to cry. I’m shaking a little bit. My daughter ran up to me and was like, ‘It’s you, Mommy!’ she was so excited. Wow.”

Umphrey said she plans to spend the next year focusing on becoming the most effective council member she can be.

Hepburn said she was “absolutely thrilled” to receive the honor, like Umphrey noting how well respected her fellow finalists are in the community, offering all of them her congratulations.

For her part, Hepburn said her goals for the upcoming year are to “build on the work that’s already in place and identify more gaps that will take us closer to our vision of being the model health and wellness community.”

Nineteen other young professionals were recognized Thursday evening after being nominated and selected for the “Twenty Under 40” distinction, aimed at showcasing outstanding professionals who work in Cochise County and were age 40 or younger as of June 30.

Hepburn was one of seven Citizen of the Year finalists, the criteria for which focused on those who went significantly above and beyond in making contributions to the community.

Umphrey moved to Sierra Vista in 2006, when her husband was stationed on Fort Huachuca, and the couple decided to make it their permanent home in 2008. Umphrey now lives on the city’s West End.

She became a certified dog groomer the same year she moved to Sierra Vista, working for a time at Waggin’ Tails before starting her own business, Pups With Style, in order to spend more time with her two kids. The business grew so rapidly that Umphrey is currently unable to take on new customers, with a roster of more than 400 steady clients.

Last year, Umphrey turned her efforts toward her bid for Sierra Vista City Council, feeling it was time to help enact change in the community.

“I knew that if I was ever going to make change, I was going to need to be on the other side of that fence doing the nitty-gritty work,” she said in a previous interview. “Someone said, ‘Why don’t you run for council?’ and I said, ‘It’s not really a good time for me,’ and they said, ‘It’s never going to be the perfect time.’”

She decided the next morning to run, and since her successful campaign, Mayor Pro Tem Rachel Gray — one of three people to nominate Umphrey for Twenty Under 40 — says Umphrey has been someone who “walks the walk, as well as talking the talk.”

“She is the epitome of someone who should be recognized for her continual advocacy,” Gray said in her nomination.

Hepburn, a native of Scotland who came to Southeastern Arizona by way of Southern California, Texas and Louisiana, has for many years been a central figure in the literal health of Sierra Vista and its surrounding communities. Formerly the CEO of Sierra Vista Regional Health Center, Hepburn was pivotal in delivering a much-needed new hospital — dedicated as Canyon Vista Medical Center in April 2015 — to the area.

For the last six years, Hepburn has been a key driver for health in the area as CEO of the Legacy Foundation of Southeast Arizona, whose mission is “promoting population health and community wellness.” The Legacy Foundation does that by funding grants of all sizes to people and organizations whose aims align with the foundation’s mission.

According to her nominators for Citizen of the Year, Hepburn doesn’t just encourage those she encounters, she leads the way.

“Without her leadership, vision and contributions to the welfare of Cochise County, we would not have a new hospital, a new college campus, and a major philanthropic foundation,” wrote Lanny Kope in his nomination.

Current Legacy Foundation Board Chairman Brian Barkdull praised Hepburn for “her innate passion for her community through her vast healthcare experience.”

“She truly does care,” Barkdull concluded.

Aside from the awards presented Thursday by SSVEC’s Eric Petermann, the program was highlighted by keynote speaker Ryan Straight, PhD, an award-winning educator, writer and researcher who is an assistant professor of Educational Technology at the University of Arizona. Straight’s address was followed by 2018 Young Professional of the Year Sarah Pacheco.

Straight talked about his journey to his PhD, which surprised him by leading him into a life of teaching and noted that teachers only have value because of their students and the communities they educate.

“The opportunities that I have, that my coworkers have ... is all because of you,” Straight said, adding, “ ... Thank you. I wouldn’t be here, the campus wouldn’t be here ... if it wasn’t for you.”

Pacheco, meanwhile, brought several in the audience to tears, some in disappointment after learning from Pacheco that some in the community told her she “was not deserving of the title” she earned at last year’s ceremony.

She brushed that aside, though, and encouraged attendees to get involved in their community, to find something they believe in and get to work.

“If you find your cause, do your homework ... and then find out who in your community is already doing this work,” Pacheco said. “And then, get involved ... I encourage you to go out and contribute.”

Herald/Review publisher Jennifer Sorenson opened and closed the event, which was her brainchild in 2018. She was equally, if not more, impressed by this year’s class as last year’s inaugural Twenty Under 40.

“The Twenty Under 40 Class of 2019 has one common trait: the passion and drive to make a difference in our community,” Sorenson said prior to the event. “Whether this is through their volunteer efforts or excellence in their roles at work, they each strive to do and be the best. The future of Cochise County will be brighter because they care so much about the communities in which they live, work and play.”

Herald/Review Citizen of the Year Finalists